If you’re a fan of Lovecraftian horror, then I’ve got just the movie for you. Sacrifice came out on VOD on February 9, and it was directed by Andy Collier and Toor Mian. It stars Sophie Stevens and Ludovic Hughes as the main characters, and it features the great Barbara Crampton in an important side role.

The opening credits say the movie is inspired by H. P. Lovecraft’s works, and it totally lives up to that designation. Sacrifice is a slow-burn, mysterious tale about a young American couple named Emma and Isaac who travel to Isaac’s birthplace, a small town in Norway, so he can claim a house he recently inherited. While there, they encounter a strange local cult, and they uncover some devastating secrets from Isaac’s past.

When the couple first arrives in Norway and check out the house, the movie drops a few vague hints about the horrors that might be lurking there, but it doesn’t give you anything too concrete. You get the impression that there might be a Cthulhu-like monster living in the waters around the town, but you can’t be too sure about it. The only thing you really know is that this place is definitely hiding some ominous secrets.

Then, when Emma and Isaac go out to eat that first night, things just get stranger. The locals act really coldly towards them at first, but their entire demeanor changes once they learn who Isaac’s father was. The pendulum swings to the opposite extreme, and they begin to treat Isaac and Emma like royalty. Significantly, you also notice a tinge of fear in their voices. It’s natural that they would be ashamed of having treated one of their own so poorly, but their fear makes you wonder who or what Isaac’s family could possibly be. Again, all we get are hints that there’s much more to the story than meets the eye, so you can’t help but be intrigued by the possibilities.

From there, Sacrifice continues in that same vein and immerses you in its mystery more and more with almost every scene. Whenever Emma and Isaac interact with the locals and experience the town’s unique culture, it just raises more questions about what’s really going on. For example, they find out that the residents there worship a mysterious, sea-dwelling deity called the Slumbering One, but until the final scene, you’re never sure if this creature actually exists.

In good Lovecraftian fashion, this all unfolds at a pretty slow pace, letting you stew in the tension and intrigue without giving you any relief until the very end. The movie purposely avoids anything that might distract from that tension, so it keeps the scares to a minimum. Instead, the horror comes mainly from creepy imagery and a pervasive, eerie atmosphere that unsettles and perplexes you from start to finish.

The only real scares in this film come in dream sequences. Emma has multiple dreams about something bad happening either to her or to Isaac, and they usually involve water and some sort of tentacled monster. Normally, this would be a huge turn-off for me, as dream sequences are notoriously lazy and obnoxious, but Sacrifice actually does them really well. The movie makes it clear that the dreams are somehow connected to the Slumbering One, so they’re not just cheap attempts to insert some jump scares into an otherwise perfectly good slow burn. No, they’re a legit part of the mythology, so they fit perfectly into the story and feed right into the town’s mystery. 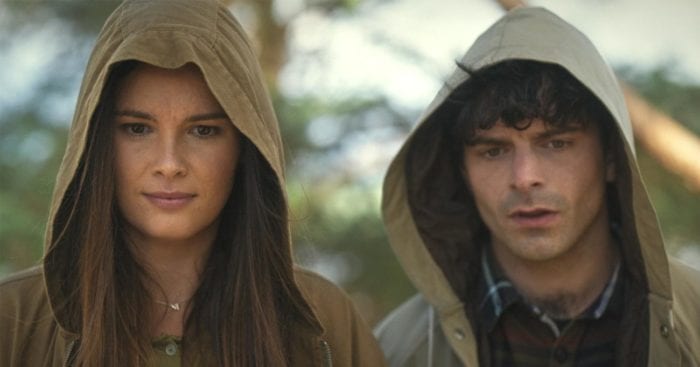 But those dreams aren’t the only scenes that hit hard. Throughout most of the film, I thought I could see where the story was headed. I obviously didn’t know exactly what was going to happen, but I thought I had a decent idea of what it was all building towards. But I was completely wrong. The ending of this film bowled me over in a way that would make Lovecraft himself proud. Much like his own stories, this one gives you a little peek behind the curtain while still preserving the mystery. It gives you just enough information to let you know what’s really going on, but it doesn’t sacrifice any of the mystique that the film spent so much time establishing. It made me immediately want to watch the movie again, and on my second viewing, that ending still hit me like a ton of bricks.

All that being said, Sacrifice isn’t perfect. My one real criticism of the movie is that its plot is rather derivative. It’s almost a modern riff on the H. P. Lovecraft novella The Shadow over Innsmouth with a bit of The Call of Cthulhu thrown in, and it’s also very reminiscent of the classic British folk horror film The Wicker Man. It doesn’t really break any new ground, so if you’re familiar with those stories, it can feel like you’ve seen this one multiple times before.

But in the grand scheme of things, that’s a pretty minor criticism. Sacrifice gives you everything you expect from a good Lovecraftian horror story, so you can forgive that one flaw. The film sets up an intriguing mystery and then slowly builds up the tension as the plot unfolds, and it ends with a shocker that gives you just the slightest of glimpses into the horror lurking in this small town. So if you’re looking for something new to watch this month, I’d definitely recommend that you check this one out. It’s a bit by-the-numbers, but that one defect is far outweighed by the many things this movie gets right.