Few horror movies are as tough to pin down as the 1973 British classic The Wicker Man. While it’s normally considered a horror movie, it doesn’t really have scares, and it doesn’t even have anything particularly creepy until the very last scene. Granted, it ends on one of the most chilling notes in cinematic history, but if you turned it off right before that, you might not even know why it was considered horror. For most of the film, all we get is an intriguing mystery about a lost girl and the weird religious beliefs and practices of an isolated Scottish island.

Even more mysterious is the movie’s attitude towards the two religions it portrays—Paganism and Christianity. Sgt. Neil Howie, the main character, is an ardent Christian, while the natives of Summerisle practice a form of Paganism. You’d think that a film like this would support one of these two faiths over the other, but that doesn’t appear to be the case with this one. On the surface, the movie doesn’t seem to favor either one, so it’s tough to see what (if anything) it’s trying to tell us about them.

However, I don’t think all is lost in this regard. I would suggest that The Wicker Man does in fact have a solid message about these two religions, albeit one that goes outside the box and subverts our expectations. It does support one faith over the other, but we need to look at its portrayal of them from a different angle than we’re used to. To see what I mean, let’s examine the movie’s treatment of both Paganism and Christianity and find out where it stands on the value of each.

Let’s begin with the movie’s attitude towards Paganism. For most of its runtime, this seems to be the religion it favors. While Sgt. Howie is rude, judgmental, and kind of a killjoy, the islanders are the exact opposite. They’re open-minded, fun-loving, and very sexually open, so if you like being happy and enjoying life, they seem like the people to hang out with.

To take just one example, when Sgt. Howie first gets to the inn where he ends up staying, the people there are all enjoying one another’s company and having fun, and they sing a joyful and openly lustful song together about Willow, the owner’s beautiful daughter. Willow herself gets a real kick out of it, and rather than run away in shame or tell them to stop, she just laughs and dances right along with them. 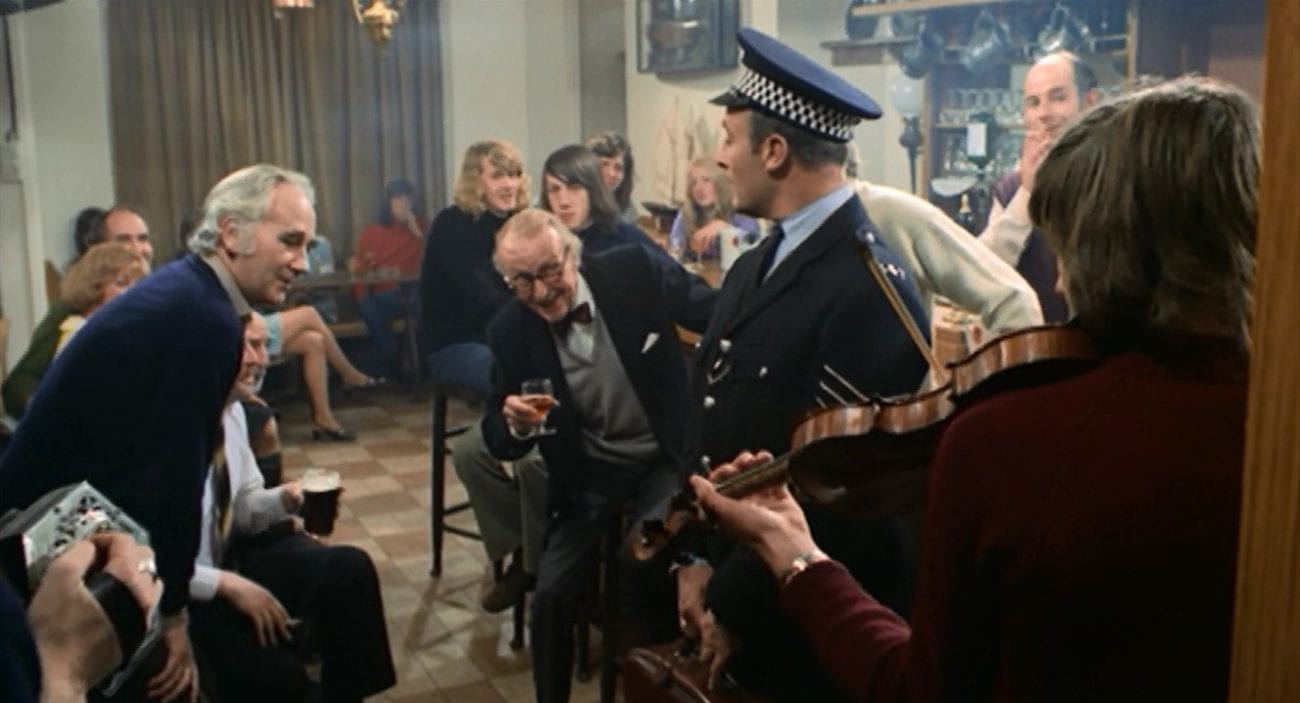 However, when we get to the very last scene, we find that the islanders aren’t the harmless merrymakers we think they are. In fact, they’re downright evil. The girl that Sgt. Howie was looking for was never really lost, and the islanders simply lied about her to lure the officer to their island so they could sacrifice him to their gods. Then, in the final scene of the film, we see Sgt. Howie burned alive in a giant wicker man statue as the islanders happily sing and dance around him.

When the credits begin to roll, it’s obvious that The Wicker Man isn’t pro-Paganism. These people are cold-blooded murderers, and they do it with smiles on their faces. They’re clearly evil, so your first reaction might be to think that the movie must be pro-Christianity instead. However, it’s not quite that simple.

Sgt. Howie, the only Christian in the movie, is portrayed in a very negative light. It’s understandable that he would be shocked and appalled by Summerisle’s acceptance of Paganism over Christianity and the natives’ very permissive attitude towards sex, but the problem lies in his behavior toward them. He’s rude and judgmental, and he walks around like he’s angry all the time.

For instance, when he meets Lord Summerisle, the leader of the island, he essentially tries to beat the man over the head with what he believes is the superiority of his religion over Paganism. He mocks the people’s beliefs, he belittles their practices, and he does it all with an air of smug superiority. Granted, he’s not a fanatical psycho who murders people in sacrifice to his God, but he still makes Christianity come across quite poorly in this film. 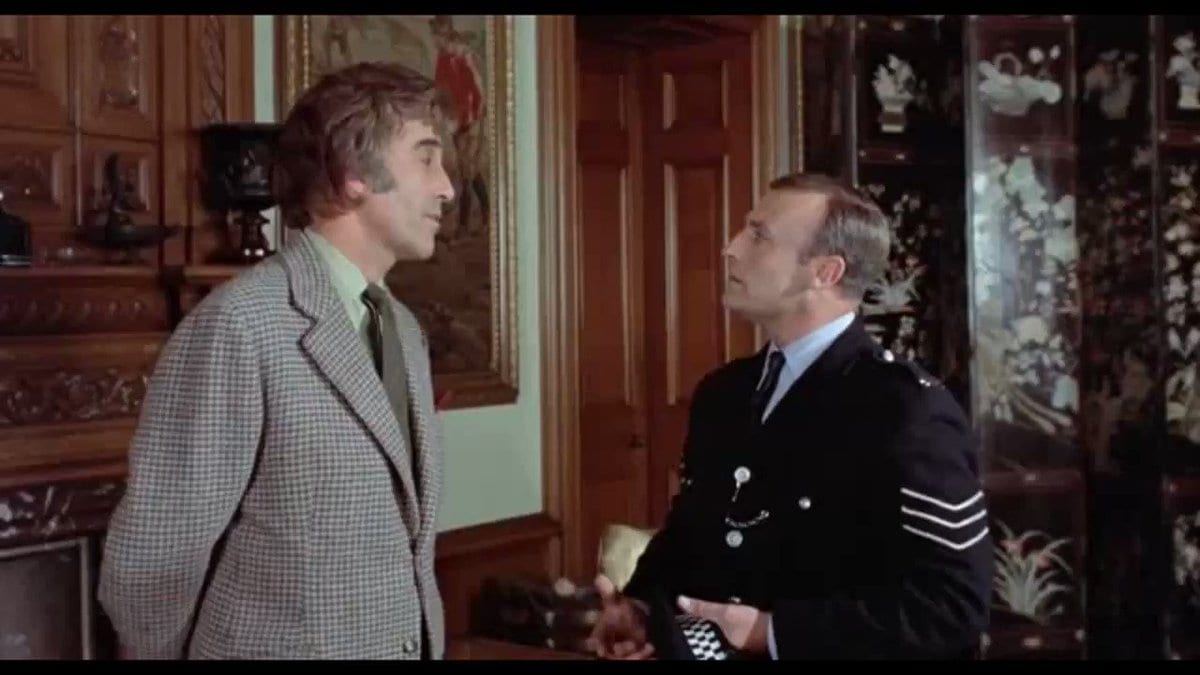 So as I said before, The Wicker Man doesn’t seem to look kindly on either Paganism or Christianity. At best, it tells us that Christianity isn’t quite as bad as Paganism, but that’s still frustratingly anticlimactic. In a movie about an encounter between these two very different religions, we want one to come out the clear winner, but this film doesn’t provide that…or does it?

At this point, I want to lay all my cards on the table. I’m a Christian (a Catholic, specifically), so what I’m going to say next doesn’t come from the viewpoint of a detached, third-party observer. Rather, I approach this film from the standpoint of my experiences in one of the religions portrayed in it, and I can’t deny that my faith colors my interpretation of it

As a Christian, I see this movie as anti-Paganism as well as anti-Christian, but let me explain what I mean. Notice, I said anti-Paganism but not anti-Christianity. I think the movie presents Paganism (or at least this particular brand of Paganism) in a bad light, but it doesn’t exactly do the same with Christianity. Instead, it presents Christians in a bad light, and that’s a big difference.

See, Sgt. Howie comes across negatively because he doesn’t really follow the teachings of his faith. While the islanders are simply following their Pagan beliefs by murdering him, everything negative about Sgt. Howie comes from his failure to follow Jesus’ teachings about loving others. And that, I would suggest, is the key.

The movie isn’t telling us that Christianity is bad. Rather, by criticizing the sergeant for not following the teachings of his faith, the film is subtly telling us that those teachings are in fact good. The problem is simply that we Christians often don’t practice what we preach. We say that we’re supposed to love everyone no matter what they believe or how different from us they may be, but many of us don’t actually follow through on that claim. All too often, we reject and condemn people who disagree with us on political or religious issues, and by some sort of Orwellian doublethink, we ignore Jesus’ command to love our enemies and instead conjure up a non-existent command to hate and revile them.

And in my opinion, that’s part of what makes The Wicker Man so great. It’s not just an intriguing mystery with arguably the most bone-chilling climax in cinematic history. It’s also a careful and thought-provoking critique of the disconnect between Christianity and Christians, and it’s just as relevant today as it was when it first came out almost five decades ago. While it ultimately supports Christianity over the Summerisle cult, it doesn’t do so in a naive or triumphalistic manner. Rather, even while it subtly promotes the teachings of Christianity, it still recognizes that many Christians don’t live up to those teachings, and it doesn’t shy away from rightly criticizing us for that.