If anyone is familiar with Joe Bob Briggs and his stints with The Movie Channel and TNT, you know he opposes sappy and gooey love. Never one to champion cliched love stories, Joe Bob Briggs has always had an affinity for tearing down the cliches of love. It is only fitting, then, that his new Shudder special that dropped on February 12, 2021, Joe Bob Put A Spell On You, would not be a conventional, heartfelt double-feature of love and affection. Instead, as would be expected, Joe Bob nukes Valentine’s Day with a five-and-a-half-hour special consisting of Tammy and the T-Rex and The Love Witch.

As we round the corner to complete another Valentine’s Day, how does one express their love? Is there one specific way to identify who or what is the object of your desire? Must you profess that love through cheaply made chocolates and over-priced stuffed animals? Who says you need to show love and affection with such materialism? Instead, what Joe Bob finds is that you don’t need such surface-level possessions to profess those feelings that lie deep within your heart. All you need is a strong enough love and desire to propel you forward to obtain the object of your affection. Or, in this case, an animatronic dinosaur and a lovesick witch.

Even though my title states that Joe Bob nukes Valentine’s Day, that may not be one-hundred percent accurate. From his early years through his current stint on Shudder, Joe Bob has grappled with finding a long, lasting love. As I mentioned earlier, multiple wives have graced Joe Bob’s life, including his darling, Wanda Bodine, whom he speaks about with tenderness and affection. And who could forget about Chubb Frick? He’s the ex-pro bowler, uncle of Joe Bob’s second ex-wife who smokes White Owls from the 7-11. Joe Bob lamented in the past about Chubb being 68, and his mail-order bride just turning 17, and how they had a loving relationship of her taking care of Chubb. What am I trying to say, you may ask? Joe Bob knows love when he sees it, yet struggles to find it for himself.

And he certainly shows a lot of love for his first feature of the night as he presented the R-rated version of Tammy and the T-Rex. A film like this, honestly, is the best example of love that Joe Bob could offer to the Mutant Family. The film has the right mixture of romance, comedy, horror, and guts to satiate the thirst for horror romance of all who watch. Though the film itself is a quirky love story, Joe Bob showed more of a fondness for the performances by stars Denise Richards and Paul Walker and director Stewart Raffill.

And speaking of Stewart Raffill, Joe Bob dug deep into his heart and showed us, the audience, his true love of the night: Ice Pirates. Now, as someone who has not seen this particular film, I can attest that it is now on my must-watch list. Joe Bob took a brief moment to break down the plot of Stewart Raffill’s Ice Pirates, and it was nothing short of a masterpiece. Anytime you can spare a few moments diverging from the main topic to delve into another topic and come away with the promise of “space herpes,” I consider that time well spent. Who needs gooey and sappy love when you have “space herpes”? Now that I think about it, “space herpes” might make you gooey and sappy in all the wrong ways.

For Tammy and the T-Rex, Joe Bob spread the love around to the maestros that make low-budget films work so well. Not one to denigrate a movie just because of a lack of funds, Joe Bob fawns over the hurried production history, the luck of the cast, and the ability to incorporate an animatronic dinosaur into the main plot of Tammy and the T-Rex. It just goes to show that his love for film and horror, specifically, knows no bounds.

And speaking of knowing no bounds, the concluding feature for Joe Bob Put A Spell On You was the 2016 film, The Love Witch. Swinging wildly from the campy Tammy and the T-Rex, Anna Biller’s The Love Witch follows Samantha Robinson as the titular witch who brews spells for men to fall in love with her, which goes awry.

Joining Joe Bob during this course of the night was the mastermind behind The Love Witch, Anna Biller. As a jack-of-all-trades on the film, Biller shared her filmmaking choices, inspirations, and provided insights into the mechanics powering The Love Witch. Even with the COVID-19 pandemic raging on, Anna Biller was able to join Joe Bob via satellite, enabling the two to engage in a thorough and friendly chat. 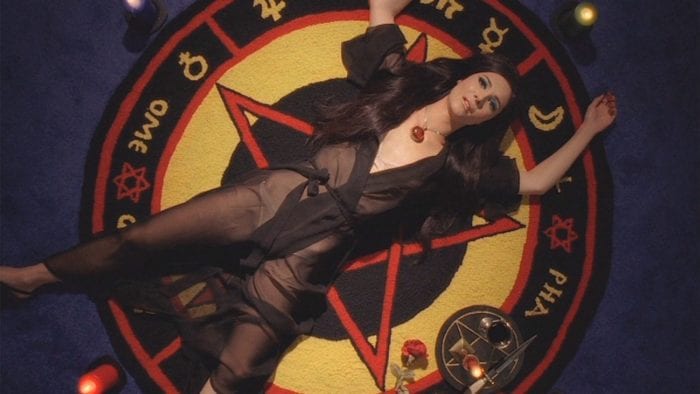 If Tammy and the T-Rex portrayed a typical teen romance film, albeit, with a mechanical dinosaur, The Love Witch follows no conventions and walks its own path. Elaine, the witch of the film’s title, starts a new life after her husband dies. Did she do it? The answer to this question is left deliberately unclear. We follow her journey in her quest for true love and the men who have the unfortunate paths that cross hers. Joe Bob mentions to Anna Biller that the film is hard to describe to others. His assertations are correct and, overall, this is a good thing. It is refreshing to see a movie that lies on the other side of the spectrum of romance and love. Not content with a boy-meets-girl story, The Love Witch takes a feminine point of view and crafts a unique horror and love story, all in one.

So, what did we learn with Joe Bob Put A Spell On You? We learned that love comes in all forms, shapes, and descriptions.

Do you love the high school cheerleader, but her psychotic ex-boyfriend won’t let her go? Trying to make the relationship work hits its struggles when the ex beats you up, leaves you in a wildlife area to get mauled by a lion—only to be brought to the hospital before being kidnapped by a mad scientist who puts your brain into an anthropomorphic dinosaur. Sure, we’ve all been there before!

What about being a normal witch who is looking for her true love? Simple, right? So what that she may or may not have killed her husband—that won’t stop her from moving to a new town, concocting potions for the right one, driving men crazy, visiting burlesque shows and an impromptu renaissance fair, and having ritual flashbacks with plenty of flesh on both sides of the aisle and multiple whangdoodles because Anna Biller covers all bases. I’m sure we’ve all been there before, as well.

Maybe with a title like, “Joe Bob Nukes Valentine’s Day,” there might have been the hope that Joe Bob and Darcy tore down the conventions that come with such a superficial holiday. Instead, Joe Bob affirmed his love with the broad spectrum that is horror. Sure, there were no Hallmark moments, tearful sentimentalities, or romantic cliches. That doesn’t mean that love wasn’t in the air—quite the contrary. Film geeks, horror nerds, and those wanting to see witches and dinosaurs get laid could all come together as one and find something to love together. And truly, isn’t that what Valentine’s Day should be about?