Search
"You're not welcome here."

The winter holiday season comes with a lot of expectations. Shopping for gifts for friends and family, cooking that perfect turkey feast, and catching up with relatives you haven’t seen in a while. One of the undoubtedly most awkward occasions that can happen is meeting your significant other’s family for the first time. You want to impress, you want them to like you. And in no film does that situation go more wrong than in 2019’s The Lodge.

The gut punches start fast in this movie, opening with the graphic suicide via gunshot of a woman named Laura. Richard (Richard Armitage) has decided to leave her for Grace (Riley Keough). They met when he was researching extreme religious cults, one of which Grace is the only survivor. Think Heaven’s Gate. Richard’s two children, Aiden and Mia, are understandably hostile towards Grace. They see her as the woman who destroyed their family, took their mother away. It’s hard not to blame them…it’s a tragic situation. Keen-eyed horror fans may recognize Aiden’s actor, Jaeden Martell from the newer adaptation of Stephen King’s It and Mia’s Lia McHugh from Totem and Into the Dark.

Hopeful that they can work past it and get to know each other better, Richard decides they will spend Christmas together at the family’s remote lodge. That is until he has to leave for work, and it’s just the three of them and Grace’s dog. Refusing to talk to her, Grace is left to her own devices. It doesn’t help the lodge is full of Catholic imagery, bringing back some awful memories.

Grace’s efforts to spend time with the kids by decorating the tree or watching movies are all rebuked. Keough does an absolutely great job at playing the most downtrodden woman I’ve ever seen. Her sadness and desperation to find some comfort in her potential new family are heartbreaking.

Christmas cheer is shoved in our faces pretty much the second after Thanksgiving is over. It’s a pretty easy image to conjure up: bright, colorful lights, reds and greens, happy smiling faces. In contrast, The Lodge is so stark it’s almost black and white. Muted browns, whites, and blues are almost all you will see. The cold seeps into every frame. Rarely is there a sense of warmth, even when the gas fireplace is lit. The narrow hallways and dimly lit rooms give it a claustrophobic feeling. 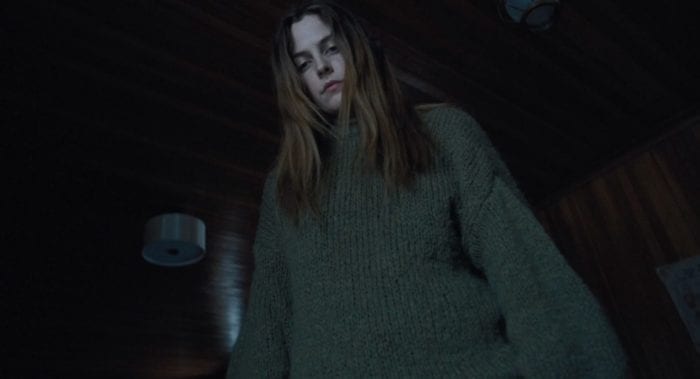 Especially with the way 2020 is going, this is going to be a reality for a lot of people during the holidays—staying home instead of traveling, a small and quiet Christmas. Many of us now, like Grace, are dealing with survivor’s guilt. It’s a different situation of course, but Aiden and Mia are going through the same thing. If only they could open up to each other about it things might not be so bad. Connecting through trauma can be a hugely cathartic experience. This is exactly why support groups exist.

It’s funny how much my work and personal life seem to mesh when I watch movies, especially ones like this. I work in a mental health nonprofit, helping people deal with a variety of issues, and a lot of it comes back to one simple crux—poor communication. So many problems, in real life and in movies, could be solved if people just learned to talk and truly listen to each other. Much of my day is simply spent listening.

While suicide rates being higher around the holidays appears to be only a myth, made worse by movies, it truly can be a difficult time of year for a lot of people. Talking to someone about what you’re going through can make a person feel weak. I would argue that it only makes you stronger, having the courage to seek help. Sometimes it feels very much like The Hedgehog’s Dilemma, the pain of letting someone get too close vs the loneliness of keeping them shut out. The pain, though, becomes easier to deal with once it’s out in the open.

Of course, things are never that easy. Trauma, guilt, and shame all make this much more difficult to navigate. Aiden and Mia are also children and behave exactly as you would expect them to. They want to hurt the person that, in their minds, ruined everything. They lack the emotional maturity to understand it wasn’t Grace’s fault, they just want her to hurt as much as they do. Their mother should be here, celebrating and spending time in the lodge with them. They carry their pain with such heaviness. Before the trip, they look up Grace on their computer and find information about the cult and what happened to her. No sympathy here, unfortunately. Just ways to get at her guilt in a more sinister way. 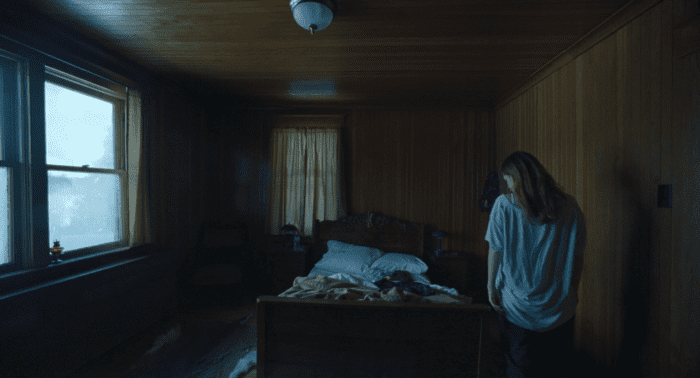 The two children concoct a plan to seemingly make Grace feel as terrible as possible. They hide her medication, change the clocks, let her dog escape. The power is out and there’s no food. All the decorations have disappeared. With their phones dead, they are completely isolated from the outside world. In the current age of technology, I would be extremely stressed out. While I try not to read the news too much and depress myself (often referred to these days as ‘doomscrolling’), I can’t imagine the emptiness of being cut off. Grace doesn’t seem like the type to have many friends, so maybe she found solace in the online world. There are forums and chat groups for seemingly everything these days, including ones for people who have left religion for one reason or another.

Traditionally the holidays are supposed to bring people together, and this can definitely happen even when you’re snowed in. Some of my fondest memories as a child were of warming in front of the fire with my parents, watching the snow fall outside. When you’re older—especially a teenager—this is the last thing you want to do. Everything feels more intense when you’re 15. You can almost feel the grumpiness emanating from Aiden and Mia.

As much as being away from my family can hurt, especially with older parents, I know it’s safer to remain apart. We call and text each other regularly. We have that connection and that comforts me. Grace was probably hoping, even in a small way, that this trip would have been that for her and the kids. She is obviously uncomfortable, but there’s an honesty to her attempts to connect with the kids that doesn’t feel forceful and fits in well with her character. Let’s watch a movie, or decorate the tree. Simple things that don’t require too much direct conversation but can still be bonding moments during the Christmas season. The John Carpenter version of The Thing actually plays on the TV at one point, another isolated, cold film.

Aiden and Mia convince her this is the afterlife, that they are dead and trapped in purgatory, and to prove that they have already passed away, Aiden hangs himself only to survive. I’m sure Grace feels this is a fitting punishment for her sins. Things then go from bad to worse for them. Suffering from medication withdrawal, growing hunger, and frigid temperatures, Grace starts to break down. She imagines her father addressing their church, telling the congregation that they must repent. Desperate, she wanders outside to get help and hallucinates a cross-shaped building, as well as finding her now frozen dog. Now realizing they’ve gone too far, the kids admit they’ve just been gaslighting Grace, wanting to hurt her. It’s too late now though.

Terrified after witnessing her mumbling to herself and self-harming, they hide in the attic. To have someone push you to your mental limits, where you completely break, is a pretty awful thing. The film ends with Grace having tied up the two children in the same fashion that her cult committed suicide, telling them they must ‘sacrifice something for the Lord’. The implications are there, but it ends before anything happens. Personally, after I watched this, I had to go do something happy. It just put me in such a depressed mood. I guess mission accomplished, filmmakers!

The film starts with a bit of life, of possibility, but as it goes on, all the warmth is removed just the decorations the children hide. Maybe to push everyone into this attempt at a family Christmas was too much. Sometimes things take easing into. I know personally, I don’t feel very festive this year, all things considered. Hopefully, none of our holidays end up like The Lodge this year, though. Stay safe and stay warm everyone.