Grief can turn lives upside down—especially when that grief is over the loss of a child. Some people say they would do anything to see their loved one again, but do they really mean anything? Audrey (Sheila McCarthy) and Henry Walsh (Julian Richings) in Anything for Jackson really do mean it and go down to the darkest depths to prove it.

Horror fans will recognize Richings as a veteran of the supernatural with character roles in such TV series as the short-lived, Stephen King-written, Kingdom Hospital, and the much longer running, Supernatural, where he played Death. He also had roles in iconic films like Saw, The X-Men, and Urban Legend. McCarthy also is a familiar face having had roles in such series as Orphan Black and The Umbrella Academy as well as movies like Still/Born and Antiviral.

Anything for Jackson tells the story of Audrey and Henry Walsh who lost their grandson, Jackson, as the result of a tragic car accident. Stricken with extreme grief and a deep desire to bring their grandson back, they join a coven searching for a way to do just that with the help of the Dark Lord. 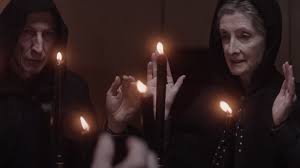 These unlikely Satanists come into possession of an ancient book that instructs them to abduct a pregnant woman and call for the spirit of their grandson to inhabit her unborn child like an unholy cloning experiment. Of course, it’s all fun and games until Lucifer himself is standing in your bedroom and demons begin using your residence like a funhouse.

From the beginning of the film, director, Justin G. Dyck, sets up the tale in painstaking detail. The movie opens with an image of the couple having breakfast and Dr. Walsh criticizing his wife’s hemming of his pants. Nothing out of the ordinary there except that there is a creepy melodic tune playing in the background and the room is quite shadowed and dark for a morning routine. The audience sees this play of light throughout the movie in the flashback scenes showing a brighter life before the decision to use Black Magic to bring Jackson back to the land of the living. Along with the subtle use of light, Dyck uses snow as a metaphor for the couple’s grief and isolation which only intensifies once they grab their pregnant unwilling houseguest, Becker (Konstantina Mantelos).

Becker is ushered to a bedroom where she is tied to the bed and Audrey begins to feed her vitamins in hopes of preparing a healthy vessel for her grandson. The older woman tries to find some way to form a bond with Becker who understandably keeps from letting the old woman into her confidence. The two aren’t strangers, Becker used to speak to Dr. Walsh on her morning walks which leads us to believe that she is probably familiar with his wife as well. She is also one of his patients which obviously reflects some level of trust most likely leading her into this predicament in the first place.

The audience is given a glimpse into what led the couple to such an extreme idea to end their pain. Their daughter also was involved in the accident that took their grandson; however, she was left paralyzed and later threw herself down the stairs in an act of suicide. And during one of the final scenes, we find out that it was Audrey who was driving although we aren’t told whether she caused the accident. No doubt it was the guilt of being the driver in a collision that cost the lives of her only child and grandchild which led Audrey to search for a coven and an answer from the Dark Arts. 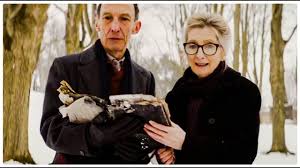 In one flashback, we see that Audrey and Henry aren’t well versed in witchcraft—they seem to have stumbled upon it after doing some haphazard research and seeking out the ancient text that ushers them on their way. After becoming familiar with the incantations, Audrey demonstrates that she can bring dead animals back to life and this leads her to the idea that she could do it with her grandson as well.

As I said before, it’s all candy canes and lollipops until Lucifer himself shows up as a houseguest while doing your ritual and scares the darkness right out of you as happens when the couple begins their incantations. But he isn’t alone. A multitude of spirits crosses over with him leading to strange visions that may or may not be hallucinations, and at least one demon who seems to be stuck in a continuum of suicide.

Along with the superb acting, this film has some fantastic scares. At one point, Becker begins seeing visions and is confronted by a man with a plastic bag over his head who reveals himself from under her bed. This scene brings back some tried and true horror elements, such as the often-seen backward walking, unnatural bending, and the like. Add to this the idea that the viewer doesn’t really know if the visions are real or hallucinations and the movie keeps you on your toes. 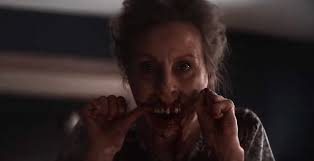 The film’s ending culminates in a classic battle of love versus evil as Henry tries to save Audrey when things go off course during Jackson’s rebirth. The couple enlists the help of fellow Satanist, Ian (Josh Cruddas), who they find out has become increasingly unstable since they unleashed the underworld and he has killed his mother before coming to help them usher Jackson back topside. Upon entering the room, Ian smudges the salt ring designed to keep evil spirits at bay and brings about even more mayhem. As everything spins out of control, the overall atmosphere becomes darker and viewers notice the walls of the room seem to have been dripping some sort of oil or dirt adding to the overall state of decay that has crept into the couple’s lives.

During this finale, Henry seems to reclaim some of his humanity and unties Becker who is then able to run away. But this movie holds on to the bitter end, and as we watch Becker presumably drive to safety, we see a vision of Jackson in the window as everything seems to collapse. But Becker’s baby hasn’t been born yet and we don’t know if the rite was successful. The movie leaves us guessing which is a fun way to end a film that already has set up so many unknowns.

This clever piece makes its streaming debut on Shudder December 3 and is definitely a highlight of 2020’s offerings.