Women, especially young women or girls, who have telekinetic powers is a deeply engaging and recurring trope in horror. More often than not, these female characters use anger or distress to initiate their powers, and these emotions frequently stem from or relate to childhood abuse, trauma, and/or bullying. There is an inherently feminist aspect to female characters having special powers and expelling these via emotions often repressed in women; however, it is problematic that their power also stems from suffering.

There are a few important questions to ask when looking at horror films involving telekinetic women. Is the telekinetic woman the protagonist, and therefore are we supposed to sympathise with her? Does she embrace or shy away from her powers? Does the horror stem from her powers? If not, is the horror from a completely external force, or does it stem from the trauma she suffered? Is her suffering extensive or exploitative in any way? How do things end for her? Does she die or lose her power in the end, or does she get a happy ending?

So, let’s explore these questions and take a look at some key horror films within the sub-genre of telekinetic women. 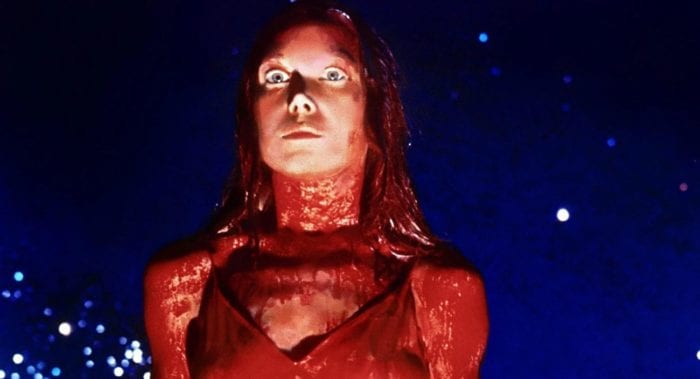 Perhaps the best-known example of a telekinetic woman, Carrie is the titular character and focus of this story. We feel great sympathy for her throughout as a result of her suffering; for most of the film, she is bullied by her classmates and abused by her overbearing, strictly religious mother. Although her trauma is the prevalent feature for the majority of the story, it doesn’t feel exploitative, as the build-up is leading to Carrie’s righteous vengeance at the climax.

Since Carrie’s telekinesis occurs alongside puberty and menstruation, which are aspects of growing up that her mother condemns as sinful, they represent an outlet for her repressed emotions. She therefore uses them to fight back against her mother more and more as the film progresses. In the 2013 remake, Carrie actually researches her powers in order to become accustomed to them and assert greater control over them. It isn’t until the end of the film that she fully unleashes her powers in a moment of decadent rage that is deeply cathartic for the audience yet horrifying for those who have wronged her.

However, it is at Carrie’s most powerful when she becomes something monstrous and the source of horror within the narrative. As the ‘female victim-hero’, a term coined by Carol Clover, Carrie is simultaneously sympathetic, righteous, and horrifying. But regardless of how we perceive her, she doesn’t get a happy ending. After taking on her bullies and abusive mother, Carrie tragically dies at the hands of the latter, no less. Although she achieves her retribution, it’s painfully short-lived, and her memory is looked upon with great spite and negativity, as we see her make-shift grave vandalised with the words ‘Carrie White burns in Hell’. 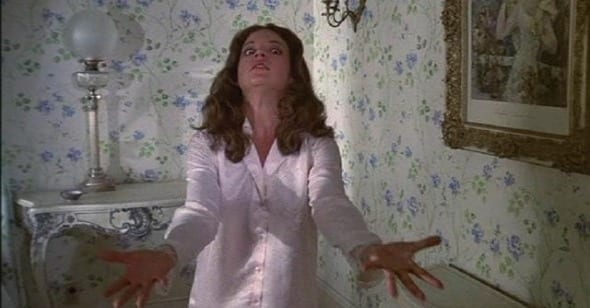 De Palma’s second film about telekinesis involves similar tropes to Carrie. Despite the narrative mostly revolving around Robin, a telekinetic boy who is abused at the facility he is taken to, a great deal of the film’s perspective is through Gillian, a likewise telekinetic girl. The plot is actually quite a subversion of the damsel-in-distress trope, as Gillian is active in tracking down Robin to try to save him and allow them both to develop their powers without maltreatment.

Like Carrie, Gillian’s powers are triggered when she is provoked or physically touched. The first instance of this is when she is being bullied at school and lashes out by making her bully bleed. However, the majority of the abuse and suffering falls on Robin rather than Gillian; she still goes through a difficult journey throughout the film but isn’t subjected to quite as much severity as Robin.

The horror itself is largely focused on gore resulting from the use of telekinesis, from both Gillian and Robin but mostly Robin when he turns into a killer towards the end of the film. It could be said that the real horror of the film is the abuse and exploitation that Childress’s agency was inflicting. Although Gillian’s powers clearly scare her and she feels remorse for hurting people as a result, she also embraces them at the end, using them to brutally kill Childress by making his body explode. As opposed to Robin and Peter, who both die, Gillian is the sole survivor who avenges Robin by killing his abuser, which is rather an empowering conclusion for her. 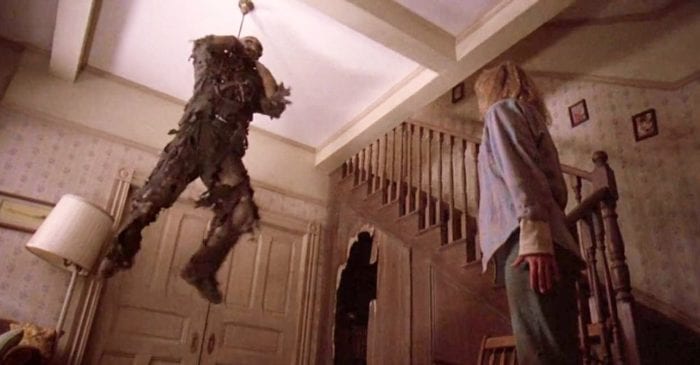 The treatment and representation of women within the Friday the 13th franchise aren’t exactly stellar, but the seventh installment introduces a telekinetic girl as its protagonist in a turn of events. Tina’s telekinetic powers are incited as a child when she runs away from her alcoholic father physically abusing her mother, collapsing the dock he is standing on when he comes after her, and causing him to fall into Crystal Lake and drown. But her trauma doesn’t end there; as a teenager, she undergoes therapy with Dr. Crews, who verbally abuses her as a way of exploiting her powers. And this is all before Jason starts killing people!

Tina, like Gillian, initially appears quite fearful of her powers, and also accidentally uses them to resurrect Jason. Naturally, the horror stems from Jason himself rather than her powers, and Tina ends up using them as a weapon against him. Frustratingly, Tina is unable to kill Jason with her powers at the climax of their battle but instead succeeds in resurrecting her father, who drags him under the lake and chains him up again. Although she survives, it’s disappointing that a) Tina doesn’t get to kill Jason herself and b) that her abusive dad does. It seems to undercut her empowerment through survival. 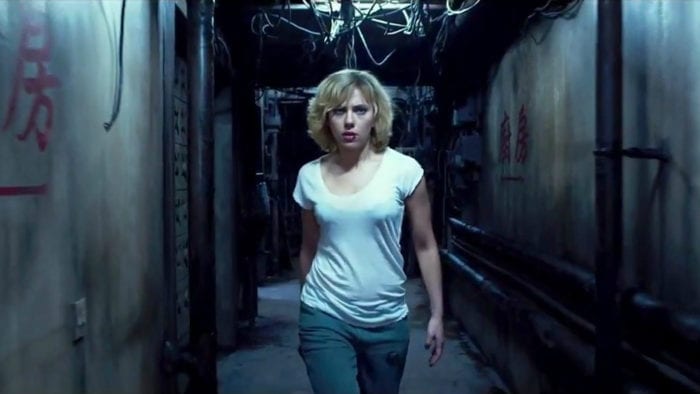 Another titular character, Lucy, is imbued with telekinetic powers as a side effect of body violation, which Kristy Puchko describes as ‘metaphorical rape’. She is kidnapped by drug mules who insert a bag of drugs into her stomach for smuggling, but when a guard kicks her, he bursts the bag, inadvertently releasing the drugs into her system. Although this is redolent of extreme bodily trauma, Lucy’s suffering only occurs in the first part of the film, as the rest of it is focused on her hunting down the drug mules and killing them with her powers.

Initially, Lucy attempts to get rid of the drugs in her system, seeking information from the drug mules responsible for her condition. However, she eventually consumes more of the drugs to stabilise her as she begins to disintegrate, and then simply to gain more power. Her killings are brutal yet deserved, as she is targeting corrupt criminals who have violated her.

At the end of the film, Lucy becomes the most powerful entity on Earth (and possibly the universe) as a result of her increasing power. The concept of unlocking full brain capacity in relation to telekinetic women suggests the idea that nothing is being added per se, but that humans (specifically, women in relation to this topic) innately have powerful abilities within them, and that their potential can be achieved when limitations are removed. 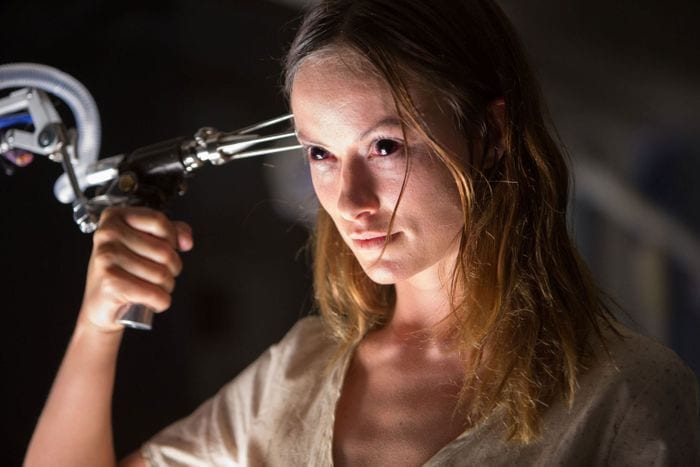 Despite rather a lot of focus on her fiance, Zoe feels like the real protagonist of this film, as the narrative revolves around her journey. She is the scientist who created the Lazarus serum, after all. Following a fatal lab accident, Zoe is resurrected by her fiance using the serum; Puchko addresses another ‘rape analogy’ here, as Frank inserts a large needle right into her brain, and she is unable to consent to be brought back to life. Furthermore, she returns after having been to Hell.

However, it is revealed that Zoe lit a fire as a child, killing people in her block of flats, which is why she went to Hell. After the initial fear, she very quickly embraces her powers but uses them for evil purposes by murdering her colleagues and fiance unprovoked. It’s hard to empathise with her for this reason as she is very obviously the source of horror, and she also assaults Niko by attempting to kiss him, then killing him for not reciprocating. In the end, she proceeds to bring Frank back to life against his consent after violently killing him.

Zoe is the only survivor in the end and rejoices in her newfound power. Like Lucy, The Lazarus Effect deals with the concept of utilising brain capacity, thus removing the limitations on women’s power, but with a focus on a less sympathetic protagonist. It’s more about the horrors of reanimation and messing with nature than a commentary on female power, but the implications of Zoe being brought back by her fiance against her consent and imbued with telekinesis is unavoidable.

Trier’s intimate exploration of supernatural power in tandem with blooming sexuality makes for an interesting and rather unique entry in this category of films. As the titular character yet again, Thelma is easy to sympathise with due to her relatability and struggles throughout. Her family is controlling, with her dad expressing abusive behaviour in how he treats her; he inhibits her powers with sleeping pills when she was a child against her knowledge, and also lies about her equally superpowered grandmother being alive. Thelma’s strict religious upbringing also creates a suffocating emotional and sexual repression, akin to Carrie.

Telekinesis is a metaphor for queerness in this film, as Thelma struggles to keep her powers (and her seizures) under control when with her love interest, Anja. Her reaction to both her powers and her sexuality is to shy away and repress it (there is a strong parallel between ‘praying the gay away’ and praying her powers away later in the film with her dad). There isn’t much overt horror, but any tension or shocking moments are a result of Thelma’s powers, the standout moment being the discovery of her baby brother under the ice.

In the film’s conclusion, Thelma learns to control her powers. She kills her abusive dad, heals her mother, and brings Anja back, which are all moments of release for her. Thelma achieves freedom and empowerment from her abilities and gets to be happy with her girlfriend.

Woman’s suffering as a prerequisite to gaining power is one of the more problematic aspects of the ‘telekinetic woman’ trope in horror. However, the often eponymous characters have the power and agency within their narratives, and we are clearly supposed to empathise with them. Even in the cases where the character is using powers for ‘evil’ purposes, it is often warranted, and a source of catharsis for the audience. The telekinetic woman is almost always scared or concerned about her powers at first, before fully embracing them by the time the film is over. Survival and empowerment are strong recurring themes for the conclusions of these stories, and the idea of women overcoming imposed limitations is a very powerful one.

Writer and fantasy/horror enthusiast. Fan of feminist/queer horror, horror comedy, and anything vampire-related!