I’ll get right to it: If we’re going to revive every pre-existing movie into a series, reboot, or sequel,  it’s about time we get to David Cronenberg’s strange psychic showdown—1981’s Scanners.

The film follows two long-lost “scanners”—mutated humans with the powers of telepathy and psychokinesis—as they engage in a game of cat and mouse fueled by corporate espionage. The two men, who we discover are brothers when they finally meet in the final 15 minutes of the film, are played by Michael Ironside and Stephen Lack. Ironside turns in a performance that stacks up with the best of Cronenberg’s leading men—Jeff Goldblum in The Fly (1986) and Jeremy Irons in Dead Ringers (1988)—while Lack lives up to his name by matching the energy level of a stand-in.

When discussing Scanners, we would be remiss if we didn’t gush over the legendary body horror set-piece that is the head explosion. It’s one of Cronenberg’s most thrilling set pieces and an amazing achievement in practical effects. Though he’s in the film for a measly seven minutes of screentime, Louis Del Grande’s exploding head is the most iconic image in the film.

The scene masterfully subverts expectations: At a marketing event, ConSec tries to exhibit the power of one of their trained scanners (Del Grande) by demonstrating his mental abilities on a willing volunteer. A man with a circular scar on his forehead (Ironside) begrudgingly accepts the invitation. After trading a series of face flexes that look like a combination of a shining vision and a wicked brain freeze, it appears something goes horribly wrong.

The ConSec scanner convulses due to an excess of psychic energy, while the volunteer—aka Darryl Revok—appears to be in control. Then, in a shocking display of practical effect gore that has far outlived the film as a whole, the demonstrator’s head explodes. 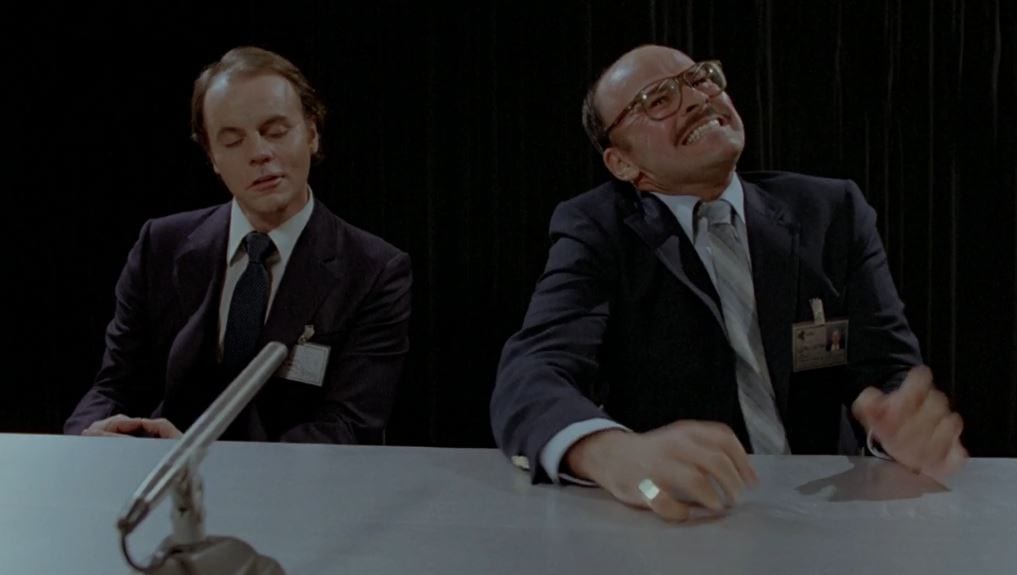 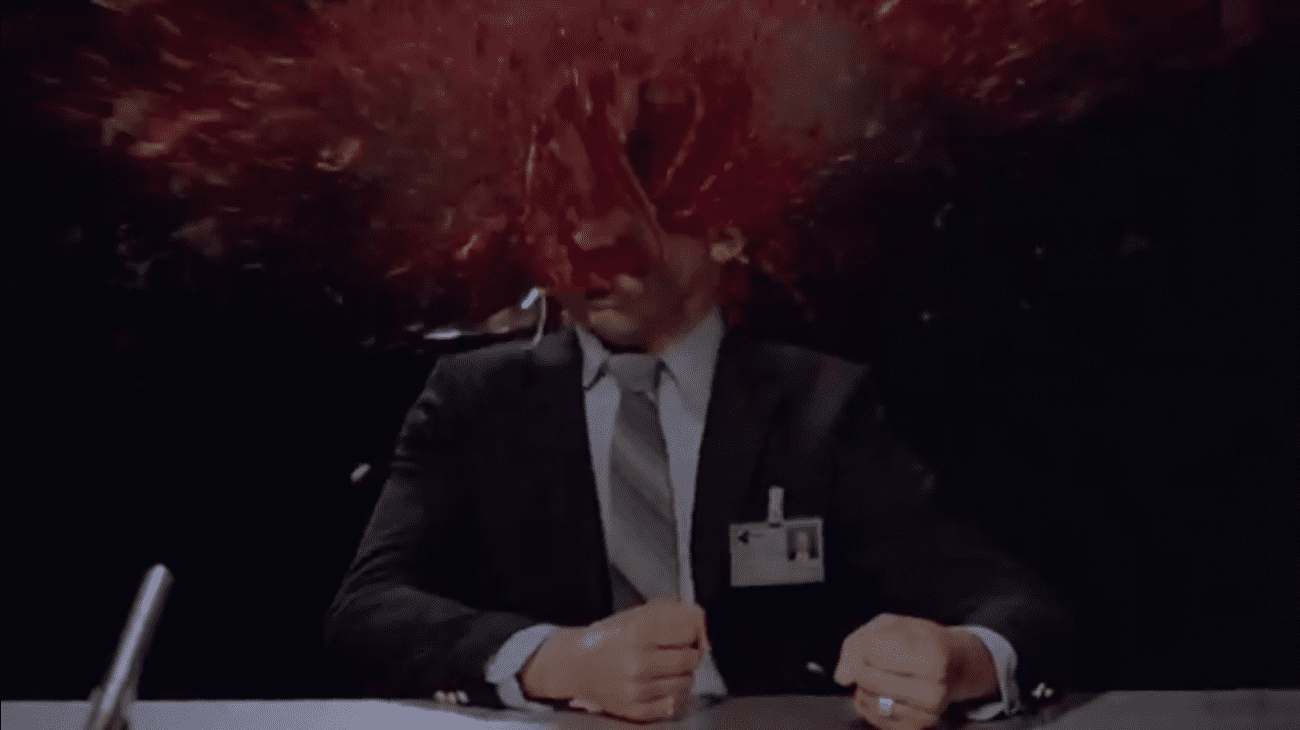 After a lot of trial and error, special makeup artist Stephan Dupuis and special effects supervisor Gary Zeller created the infamous scene by utilizing a life-like plastic bust of Del Grande’s head filled with spare special effects viscera and leftover hamburger meat from the crew, and after multiple explosive charges failed, a shotgun provided the iconic shot we see today.

Cronenberg wanted this now legendary set-piece to open the film, which is an undeniably better opening than the one we got. Instead, the story begins with a vagabond named Cameron Vale (Lack) as he scours the mall for some left-behind chow. We are introduced to the concept of scanning when Cameron overhears a mall patron as they badmouth his rough appearance and in turn, he sends waves of pain through her nervous system—an engaging scene in and of itself, but a clear downgrade from the stakes Cronenberg originally intended.

Most of the film follows Cameron’s quest for self-discovery, which is jump-started by an employee of ConSec, Dr. Paul Ruth (Patrick McGoohan). Dr. Ruth hunts down Cameron at the mall, and after momentarily curing his mind-numbing telepathy with a drug called “Ephemerol” he sets him on a mission to infiltrate and take down the group of rogue scanners led by the powerful Darryl Revok.

Cameron’s journey introduces us to even more scanners, the two most important being Benjamin Pierce (Robert A. Silverman) and Kim Obrist (Jennifer O’Neill). As always, Silverman’s performance is brief but memorable, but that’s to be expected from the regular Cronenberg player. In his dying moments, via telepathy, Benjamin leads Cameron to Kim Obrist. Kim is a believer in the unifying powers of scanning and serves as the film’s Professor Xavier opposite Ironside’s Magneto.

Unfortunately, like so many actresses of the time, O’Neill’s main purpose seems to be providing an arm for the male protagonist to snatch as he drags her away from danger. And in one strange scene, we see Kim mentally manipulate a man into believing he is a child and she is his mother. It’s an interesting expansion of what a scanner is capable of, but kind of a let down that she never really gets to add to the body horror of the film.

The film is set up to be a successful sci-fi action thriller: there are car chases, shotgun gangs, a comically outdated computer hacking scene, explosions, and an engaging final showdown, all improved by a grand score from Howard Shore. But every time Scanners picks up momentum, its monotonous corporate espionage subplot slams on the brakes.

However, having to work within the Canadian tax shelter system, it’s amazing that Cronenberg was able to complete such an audacious film. Originally called “The Sensitives,” Cronenberg’s follow up to the relatively successful The Brood (1979) was picked up by the freshly formed company Filmplan International Inc. This new relationship resulted in an influx of cash early on, but also an especially small window of time for pre-production.

Cronenberg is quoted in the book Cronenberg on Cronenberg, saying “There were literally two weeks pre-production on what became Scanners. Two weeks. Without a script. The excitement was that the money was there before anything else. Before the project. Fantastic opportunity. As a result, Scanners had the longest post-production of any film I’ve ever done.”

Cronenberg goes on to describe some of the horrors of the rushed shoot: O’Neill was upset at the producers for lying about how much violence would be in the film, McGoohan was a bitter alcoholic who left the film on bad terms with Cronenberg, and the first day of shooting ended in tragedy when a car crash resulted in two dead near the expressway where Scanners was filming. All these events added to the mounting pressure of a strict schedule.

“The desperation to get the f*cking movie off the ground before the end of the year was huge,” continues Cronenberg. “That was another bad thing about the tax-shelter era; these abnormal time pressures on everybody, not just the director, to do weird stuff to get it to happen in time. If the money wasn’t spent, if the principle photography wasn’t complete by the end of the year, then all these guys who were totally dependent on their tax write-off from you didn’t get it.”

But just like Shivers (1975), Rabid (1977), and The Brood before it, Scanners manages to transform otherwise schlocky material into thought-provoking horror. The final battle scene between Cameron and Darryl is an excellent example of Cronenberg’s ability to make the best out of bad working conditions.

The early showdown between Darryl and the unfortunate representative from ConSec sets the precedent for the grand finale. Cameron rejects his brother’s offer to join his cause, and the two engage in a mental brawl that wreaks havoc on their bodies: veins enlarge and throb, eyes explode, and heads are set aflame. Once again, Cronenberg subverts expectations.

Kim wakes up from a tranquilizer-induced nap and discovers Cameron’s burned corpse. However, slouched in the corner and hidden beneath a jacket, is the body of Darryl with the mind of Cameron.

“We’ve won,” says the now blue-eyed Darryl in the voice of Cameron.

The last two words are purposely ambiguous on what was actually won. Perhaps the merging of the two seemingly disparate ideologies presented by Kim and Darryl. Now that Cameron and Darryl are one (Camerryl? Dameron?) they can combine efforts to protect and advance the world of scanners by exacting revenge on a world damned by corporate greed.

There are some who question whether Scanners belongs in the horror genre, this grim ending is one of the reasons why it continues to find itself listed in that category. Well, that, and the exploding head.

Looking back at the ending of Scanners with 2020 eyes, it’s easy to imagine it repurposed as a season-one finale. And though rumors of a television series circulated around 2017, it appears momentum has halted on the project.

There are two sequels—Scanners II: The New Order (1991) and Scanners III: The Takeover (1992)—that have long been panned and forgotten, and two spinoffs—Scanner Cop (1994), and Scanners: The Showdown (1995)—which were too under the radar to be forgotten or panned. This likely won’t come as a shock, but Cronenberg didn’t direct any of these. Though they did teach him a valuable lesson when he found out he wouldn’t get paid for the sequels based off of his original story: get a good agent.

Surely, somewhere out there, there’s a prestigious director that both understands the nuances of body horror and possesses a fresh take on the genre. Maybe the director of the well-regarded 2020 sci-fi horror film Possessor?