It’s no lie that Nightstream comes a little late into the genre festival season, running from October 8–11, 2020. We’ve already had Fantasia International Film Festival, Fantastic Fest, and Salem Horror Fest, among many others. So, naturally, there are some films in this lineup that I’ve already seen at other festivals. And on the other side of that same coin, there are a few that I missed at said festivals that I’m glad I will have the opportunity to check out now. That’s not what we’re here for though. Listen up as I tell you what I know for a fact is good in this brief explainer. I highly, highly encourage anyone attending the festival to grab tickets to these films.

The first and most important one is Dinner in America, to nobody’s surprise. In this film, a punk rocker on the run from the law meets an unassuming pet shop employee who has an unnatural obsession with a certain band, and the two head off on a journey through middle America. Between the effortless charm of the film and the kickass original songs, there’s nothing you can hate in this film. The performances throughout are stellar, to say the least. It’s witty, fun, and heartfelt—it has all the best parts of a road movie and a fictional band whose album I need right now. With two showings at Nightstream, there is no excuse not to see this film.

I don’t think anyone who’s followed my coverage of Fantasia will be shocked that this one is on my list either. A woman is being repeatedly stalked and attacked by a man, every night, like clockwork, but nobody will listen to her concerns. This film, at its core, is about how women aren’t taken seriously when there’s an issue, whether it be an assault or a simple complaint. It gets increasingly frustrating as it goes on, and so it should. Brea Grant writes and stars in this film, and you can tell in her performance how personal this film is to her. This entry to Nightstream is a must-see, regardless of gender, but I suspect that the women in the audience will get a lot from this film in particular. 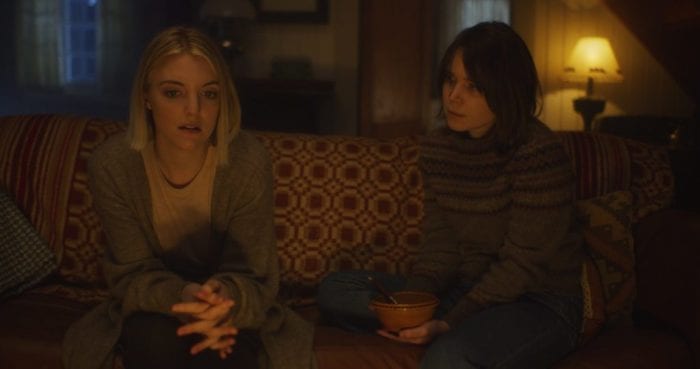 My review for this film isn’t out quite yet, but I saw it at Salem Horror Fest on Friday, and I loved it. Three friends go away for the weekend to an isolated cabin in the snowy woods, and over the course of the film, Rowan (Lee Marshall) gets increasingly paranoid that Emily (Lauren Beatty) is drinking her blood. It sounds kind of “so what” when you put it that way, but the tension and the nightmares and the suspense are what really sells this film. I don’t want to give away too much as my review isn’t published yet, but there are major homoerotic undertones to this film, at least in my opinion. Anyways, it’s definitely a slow burn of a film (so if that’s not your thing, steer clear), but definitely worth a watch.

If you’re attending Nightstream this year, and you still have a few films to pick out, or you’re undecided still, I hope this list helps sway your decision. I cannot emphasize enough that Dinner in America is the best film of the year. Period. You need to see it (and if you don’t love it, we can’t be friends anymore). I also highly recommend both Lucky and Bleed with Me, but I can only pick one number one, you know? All three of these films made a significant impact on me, not only as a film but also thematically. They go deep, and I see myself reflected in them, and I think that’s what’s most important in a film. I hope you enjoy these films as much as I did. See you all at Nightstream!