Next up on the list at Fantasia International Film Festival 2020: Monster Seafood Wars. Yes, it is a movie about kaiju octopus, squid, and crab. Even better than that, it’s a parody of kaiju films, as well as a parody of mockumentaries. To put it lightly—this movie effing rules. It’s everything you want it to be and way, way more.

Now, I’m no expert in making sushi. In fact, I know basically nothing about making it. But I do know that one of the steps in making sushi is not “inject it with a growth serum”. And so does our main character, Yuta. He’s delivering offerings of sushi to a shrine when someone swipes his basket, injects the dishes with a monster growth serum called Setap Z, and throws them into the ocean. Monster Seafood Wars covers, in the most absurd mockumentary style, the events that unfolded after. 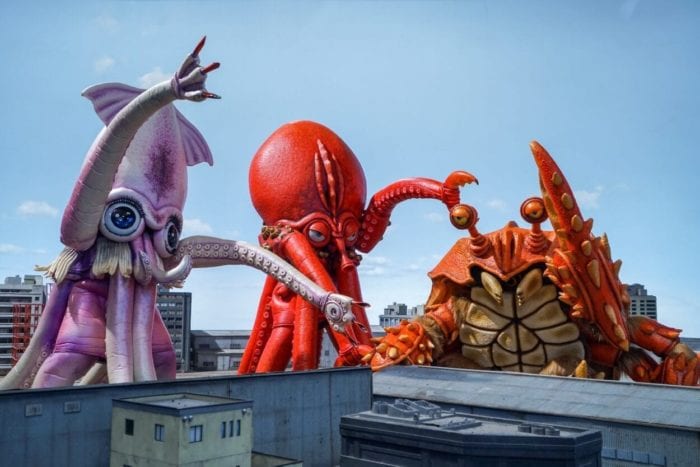 From a fake world hunger PSA featuring black and white photos of starving children to random absurd explosions in the fight scenes, this film is not short on laughs. It does a flawless job parodying mockumentaries, even nailing down the “I can’t believe they interviewed this person” character. The few human deaths in this film are all absolutely iconic. I’m not really sure how to convey that something is hilarious without giving up all the jokes, but let me try… It’s like if Scary Movie were about kaijus (and was actually funny, but that’s a discussion for another time), but instead of looking grotesque like Chris Elliot’s character and his hand, the kaijus were extremely kawaii.

What’s even funnier is when the film pivots to Food Network parody, including a character that resembles Guy Fieri so much that it had to be intentional, as well as an Anthony Bourdain type. You see, after the first attack by the Seafood Monster Attack Team (SMAT), some of the kaijus limbs were chopped off, tested for consumption, and found to be quite delectable. Kaiju meat becomes more popular than bubble tea and Kobe beef combined. You could say, the people of Japan would eat it off a flip flop (that’s a Guy Fieri quote I swear). No joke is safe around this film. If something can be added to it to make it more ridiculous, it will be. There is no limit, and it is glorious.

Monster Seafood Wars began as an unmade idea by Japan’s greatest special effects artist, Eiji Tsuburaya, an idea that sparked the creation of Godzilla. Writer/director Minoru Kawasaki took that idea, flipped it on its head, and spoofed it. What came out of it is another cult classic kaiju comedy from Kawasaki. Yes, I am already betting that this will be a cult favorite. It has all the elements of a classic kaiju movie, coupled with a found footage mockumentary backdrop. What’s not to love? 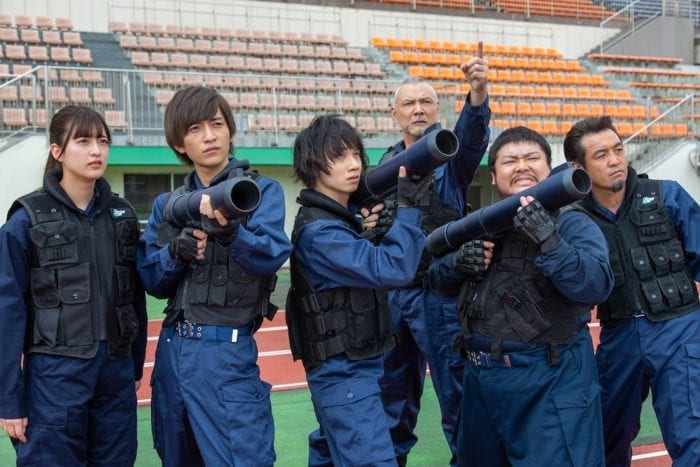 In my articles, I usually like to find a theme that the film presents and riff on that, but to do that for Monster Seafood Wars would be redundant. No matter what semi-serious approach I take, it still boils down to “it’s just a joke”. And I think that’s what makes this film special. It doesn’t take itself serious for even one second. There’s no deeper meaning, no hidden message. It’s just a kaiju parody that seeks to be as insane as humanly possible. Simple as that. It’s a film made for fun’s sake, and the world needs a lot more of that, especially nowadays. You almost caught me getting serious there, but you can’t fool me.

Not every film needs to have a big gotcha moment or a deep meaning. A lot of films take themselves way too seriously. Sometimes it’s good to just watch something for pure entertainment value. After all, film’s primary purpose is to entertain. If you’re not enjoying a film because you’re seeking higher meaning in it, the film is not performing its main function. That’s not to say that films with meaning aren’t entertaining; I’m not saying that at all. Some films lose sight of the entertainment factor and get too caught up in sending a message. Film is supposed to be fun, and this film celebrates that.

Monster Seafood Wars sought out one thing and one thing only: to entertain. And boy did it deliver on that promise. It made me laugh, it made me cry (from laughing so hard). I could not have asked for more out of a kaiju comedy. This is easily the highlight of Fantasia for me so far, but I do hope the films continue to impress me. Go see this film as soon as you possibly can.