Slashers are definitely my favorite subgenre of horror. Halloween, Scream, Friday the 13th, Nightmare on Elm Street, and the list goes on. There’s something surreal and tangible about them that speaks to me more than any of the other subgenres of horror. Slashers take what scares us the most, and attacks our senses with it. The idea of an anybody-killer in a mask has a deep psychological attachment to our overall psyche as a species it seems.

One of the things that I’ve recently been trying to get back into is indie slasher flicks. Movies like Terrifier, Drive-Thru, 100 Tears, Methodic, and the Hatchet series are very near and dear to my heart. 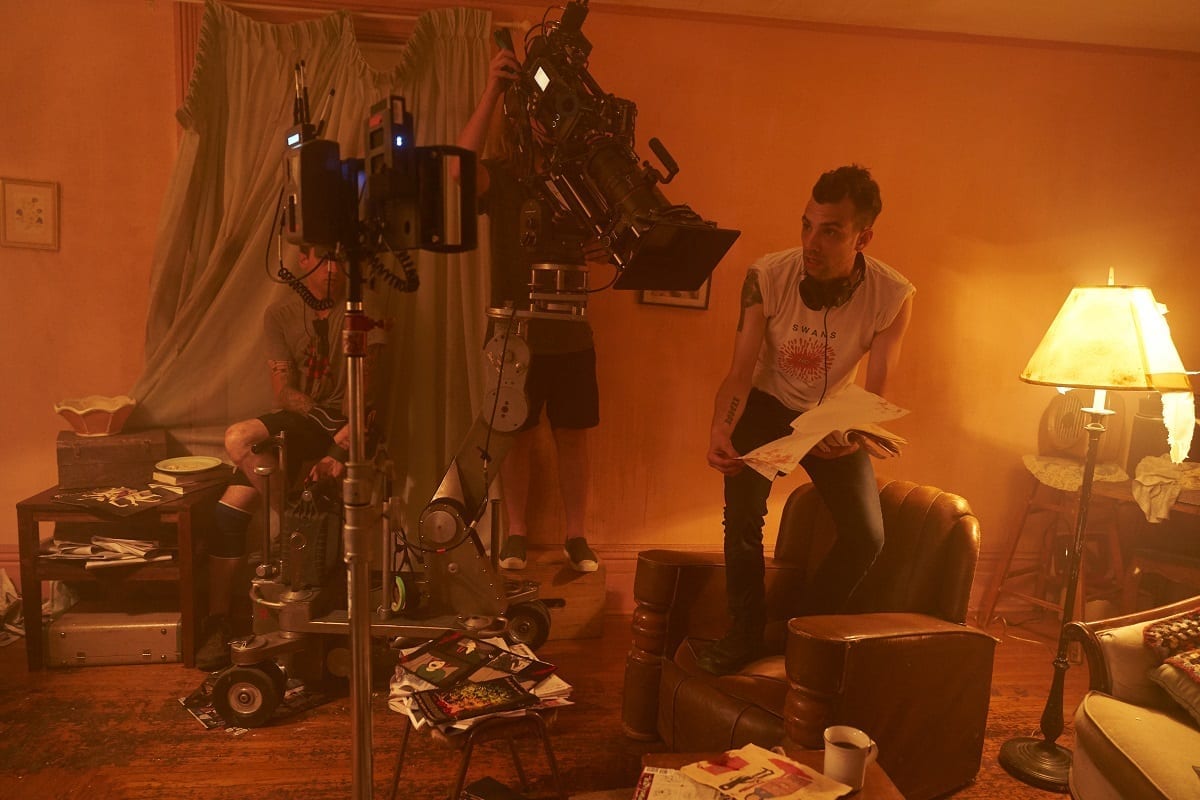 Random Acts of Violence is directed and co-written (alongside Jesse Chabot) by Jay Baruchel, who also stars as the character Ezra. It’s based on a one-shot graphic novel by the same name that was created by Jimmy Palmiotti and Justin Gray. It also stars Jesse Williams (The Cabin in the Woods, Grey’s Anatomy) as Todd, Jordana Brewster (Fast and the Furious franchise) as Kathy, and Niamh Wilson (Saw III, Degrassi: The Next Generation) as Aurora.

Random Acts of Violence is about comic book writer, Todd, his friend Kathy, his assistant Aurora, and his publisher Ezra going on a press tour to promote their upcoming final issue to their hit comic titled, Slasherman. Just as the press wheels start turning, a series of murders depicting the murders in their very comic start popping up.

Right off the bat, I can tell you that the acting is of high quality here. Jesse Williams does a fantastic job at adding layers to Todd that unravel throughout the film and culminates in a very powerful 3rd act. His performance is the stand-out for me, and it’s well-deserved praise. Let me also say that everybody else does a wonderful job of portraying their characters and breathing life into them, making them as real as possible; that does not go unnoticed. But if I had to choose a stand-out performance, it would definitely be Jesse Williams as Todd.

The overall feel and mood of the film are clearly inspired by grindhouse-horror. There are a plethora of dark, dingy settings that pop out at you and put you on notice. The use of the color red is prominent, and for a reason that can be found in the film if you pay attention. 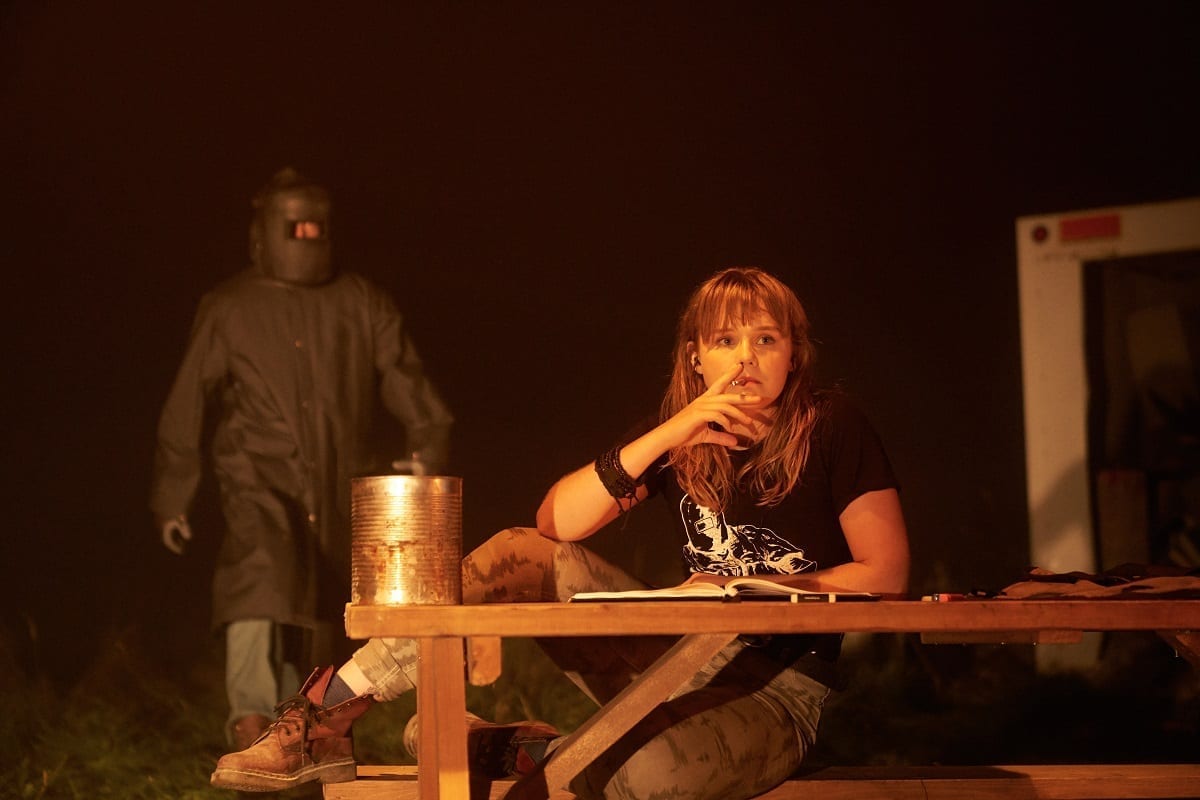 I think the most interesting thing about Random Acts of Violence is the clear fiction/real-life correlation they set up pretty early on. They focus in on if the artist is responsible for the violent acts that follow or are inspired by their art. In this case, their comic is inspired by real-life events, and in turn, real-life events become inspired by their comic. It makes for an interesting thought in the back of your mind as you watch the events of the movie unfold.

There’s a pretty intense scene where Todd is being interviewed by a radio personality and there’s a relatively heated exchange regarding the comic potentially being responsible for violent acts. The radio personality throws some very unpleasant attacks and jabs at Todd that make Todd visibly uncomfortable. Granted, I think it’s how almost everybody would react to the subject of fiction vs real violence if it personally affected them.

Of course, studies show that consuming violent media has little to no bearing on real-world violence, but that’ll always be a divisive conversation. Personally, I side with the studies, but it’s still an interesting conversation to have, nonetheless.

Speaking of violence, the kills in this film have some great moments. The first time we see Slasherman in action, he absolutely butchers a group of teenagers. And when I say butchers, I mean that it is a complete stab-fest. It really sets the tone for what kind of a killer we’re looking at here. We’re dealing with a killer that kills with emotion and vigor. 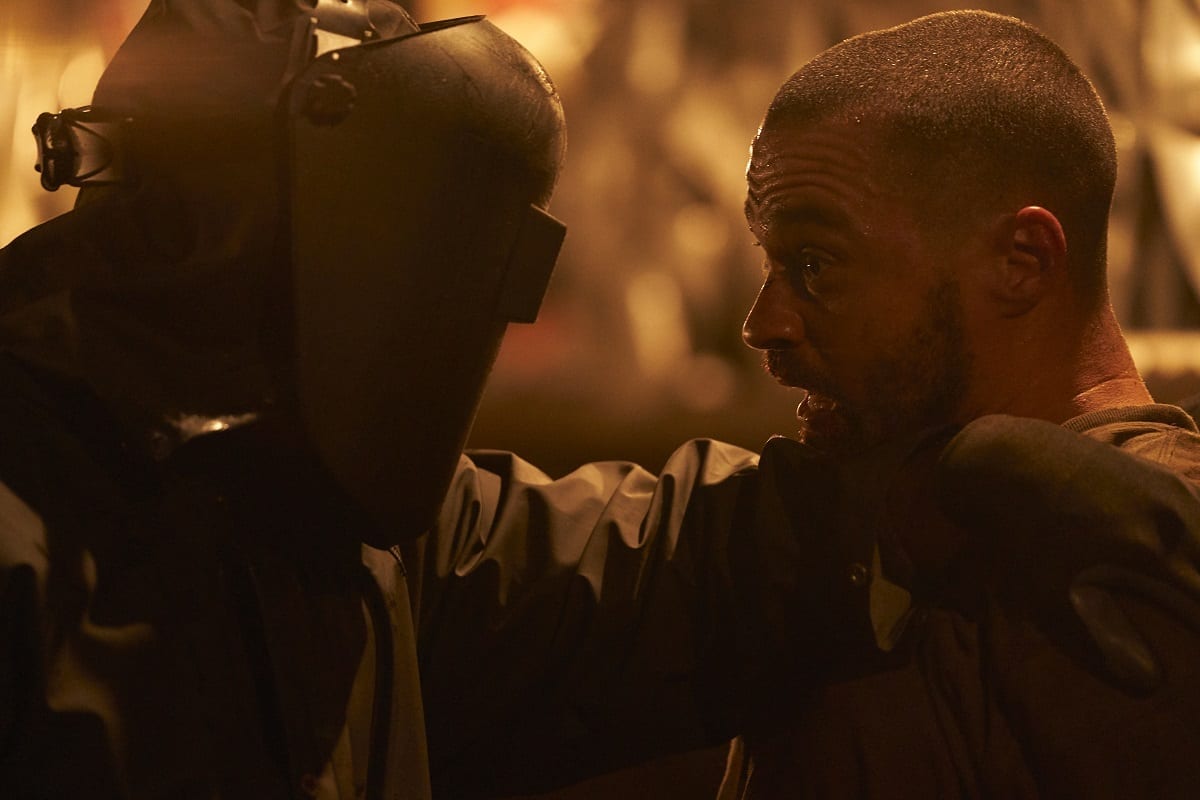 I’m going to be honest here, I had barely written down any notes while watching because I was just so enthralled in the action. I couldn’t find any time to jot anything down, and I don’t like to pause movies as they tend to ruin the flow. With a quick, snappy 80-minute runtime, there’s almost no room to breathe, and that’s not a bad thing. I think Random Acts of Violence is one of those movies that don’t need to stretch to that 90-minute mark. It’s quick, it’s well-paced, it gets out everything it needs to get out, and it keeps you entertained.

The third act, specifically, just flew by in my viewing. It has some great artistic direction, backstory, and it keeps that grindhouse vision that’s clearly been set by Baruchel intentionally. As I said earlier, the heart is what makes this film so interesting to me. The deliberate lighting, dirtiness, and dinginess of the sets really make my heart sing. It has a higher budget, but it has a lower-budget mindset behind it and it makes the charm of the whole experience feel so genuine.

Overall, I firmly believe that Jay Baruchel could make for a very interesting horror director if he so chose to focus on it. He has a clear love of the genre, and with the care that he put into this film, it only exemplifies the notion that he can make horror. He understands how to set up and deliver, and from his other comedic outings, I can only assume that the concept of a punchline in comedy helped him deliver the punches that were thrown in Random Acts of Violence. Personally, I’d love to see more horror from Jay Baruchel, and I really encourage everybody to go and watch Random Acts of Violence as soon as they can.

Random Acts of Violence is now available to stream on Shudder. Please go check it out. If you love grindhouse horror, you’ll definitely be a fan of this one.