Family dysfunction. Raging hormones. Bad skin. Growing up is hardly easy even for the most well-adjusted teenager. But for Pauline (AnnaLynne McCord), adolescence is larger than a case of hormonal menace and more of a mentally ill nightmare.

From the opening scene of Excision, we’re introduced to a family who cannot understand how to cohabitate with each other. The eldest daughter, Pauline, isn’t easy to love. She’s a brash, unapologetic, know-it-all teenager with dreams of becoming a world-class surgeon. She is the outcast of her family and not at all the daughter that her mother wanted. That daughter is her younger sister, Grace (Modern Family‘s Ariel Winter). But Grace isn’t exactly the daughter of her mother’s dreams either due to her struggle with cystic fibrosis which holds her back from fully participating in the high-society events her mother would like her to experience. 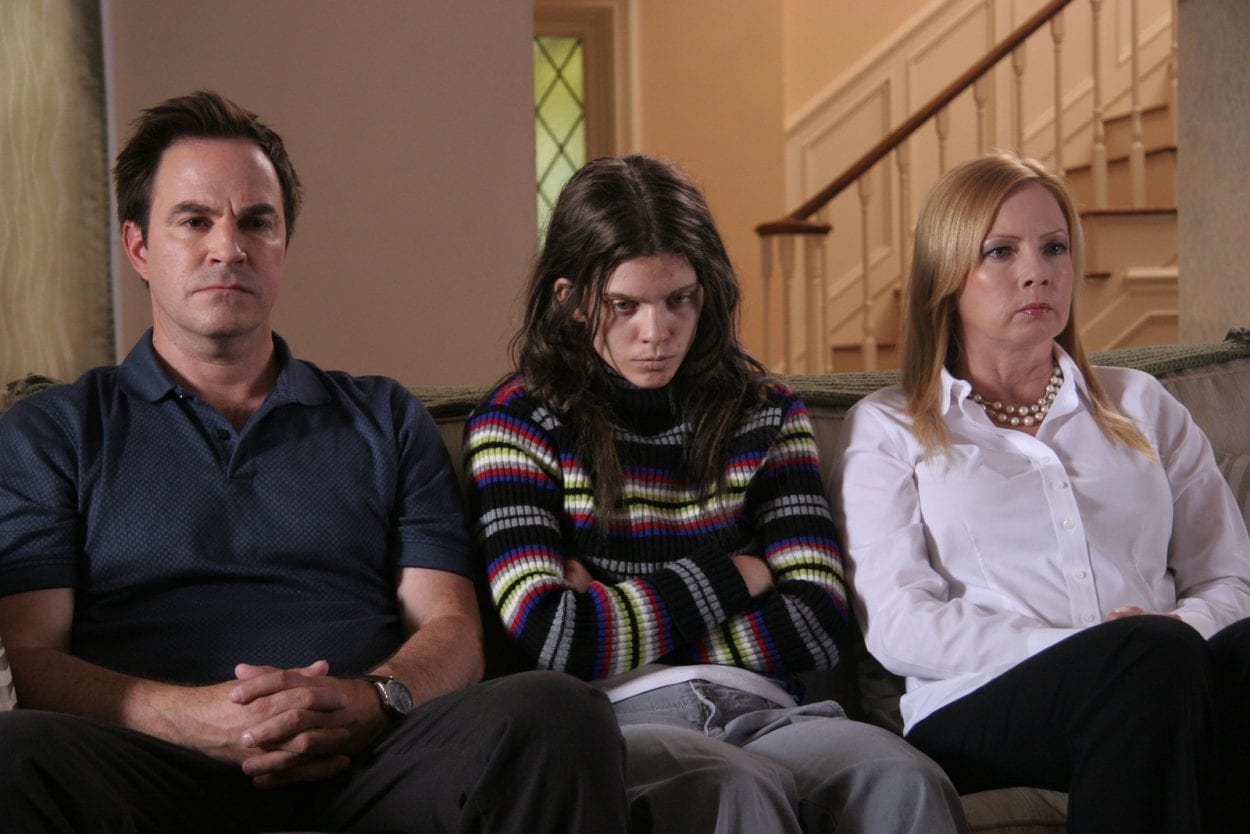 Pauline and Grace’s mother, Phyllis (brought to life by former adult-film star, Traci Lords), wants more than life has given her. She sees herself as an upper-class woman who is desperately trying to raise a perfect family while keeping up with the neighbors. Her daughters are taxing, her husband is a liability, and she is stuck trying to portray some type of perfection that will likely never see fruition. Her drive to push her family into an upper-crust mold places extreme pressure on the entire unit and threatens to destroy it from the inside.

Pauline’s father, Bob (Roger Bart), desires to be a solid figure and tries to connect with his daughters in his own way. We see an example of this paternal affection in one scene where Phyllis chastises Pauline for piercing her nose. Pauline proudly reports to the breakfast table with her new piercing, which she had done herself the night before. Her mother screams, “You ruined your face!” Bob comes to her defense saying, “I pierced a few things in my day too,” with a smirk. In this attempt to connect with his daughter and show some type of solidarity, he further alienates himself from his wife. It seems that everyone is living around him instead of including him and as a result, he has no idea what is going on in his own house or about the unraveling of his daughter right under his nose.

While most of us deal with the wild thoughts and mood swings that come with puberty, Pauline’s issues run deeper. She is in the grips of a serious mental illness that her family is ill-equipped to deal with. Pauline shows signs of this psychosis to her family in mild ways but the viewer is taken deeper into her mind with vignettes of extreme gore and violence. In these sequences, we are party to Pauline’s desires for necrophilia, dissection, and surgical fantasy.

Writer/director Richard Bates, Jr. produces these ultraviolent images with breathtaking beauty. In real life, Pauline is an unkempt teenager. Her hair is greasy, her skin is bad, she dresses poorly yet she has an admirable self-confidence that few possess. In her dream state, she is gorgeous and completely in control of her desires. These desires manifest in psychosexual fantasies that aren’t for the faint of heart.

One such scene comes to play when Pauline decides to lose her virginity to one of the popular boys in school. In her confident manner, she approaches him and proposes the act. He accepts, but to fulfill her fantasy, she waits until she knows she is going to be menstruating. During the act, she dreams of being utterly in control. The room fills with blood as she strangles him and, at this moment, she is the gorgeous, powerful Pauline who is using this young man as a pawn in her murderous fantasy. 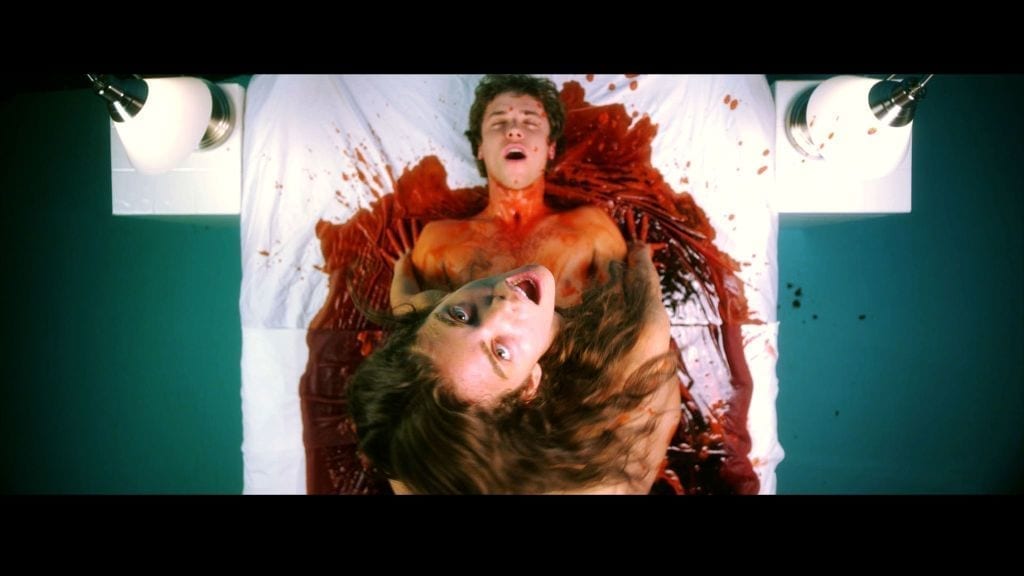 Later, when she fears that she may be pregnant, Bates gives us a scene that even the most seasoned horror viewers might find difficult to watch. Here we see Pauline callously pull a baby from under her dress and hand it to a “doctor” who immediately throws it into a furnace and watches it burn. It is unknown whether Bates meant this as a commentary on abortion or if it is simply a further depiction of the depths of Pauline’s mental fragility and depravity. These scenes, while often horrific in their content, are visual masterpieces. The bright colors in contrast with dark themes pull the viewer into a closer experience of the horror on screen. The viewer finds him/herself enticed by the eroticism while perhaps confused by the emotions elicited. 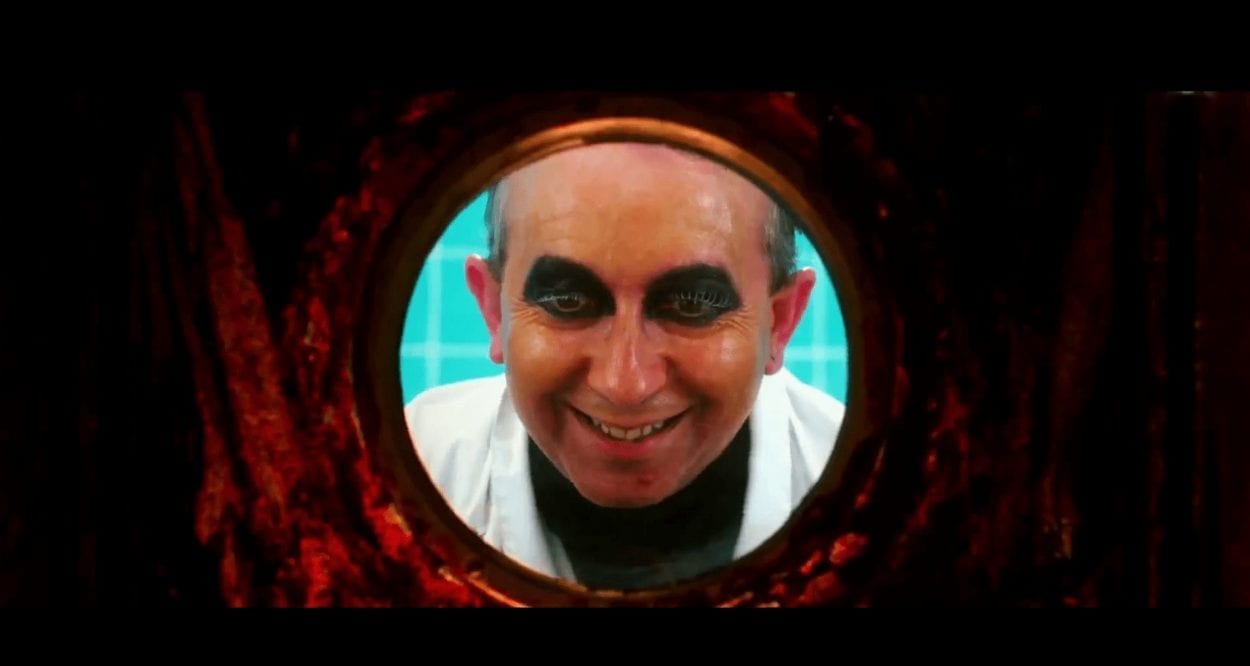 Themes of mental illness and familial rejection run deep in this film. Pauline is constantly thrown to the wayside in favor of her younger, more socially acceptable sister whom she feels the need to fiercely protect. She searches relentlessly for the approval of her mother who admits that she is unable to love her. Phyllis is unwilling to find help for her daughter whose behavior continues to escalate to the point where immediate intervention becomes emergent.

She actually calls Pauline a sociopath in one scene, to which Pauline responds, “Solely based on the definition, I don’t know a teenager who doesn’t profile as a sociopath.” Instead of sending Pauline for professional help, her mother sends her to a priest, hilariously played by the cult film director John Waters. This unwillingness to commit to Pauline’s mental health culminates in the penultimate scene of the film, in which a psychotic Pauline commits her final desperate act to win the approval of her mother and to save her family. 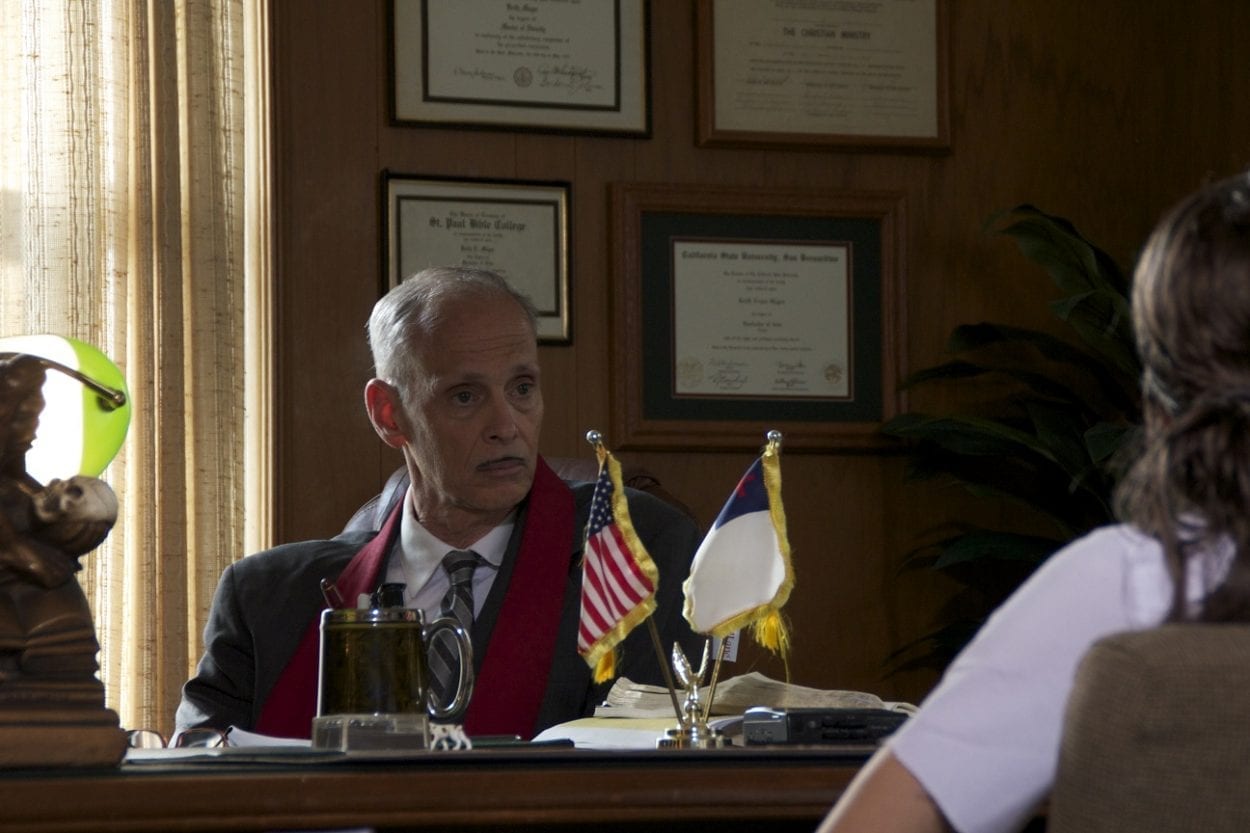 Viewers may remember AnnaLynne McCord from the reboot of Beverly Hills 90210 in 2008 and from Dallas in 2014. She is a former model who auditioned for the role of Pauline and was initially rejected by Bates until he challenged her to cut her hair right in the audition. She called his bluff and not only accepted his challenge but even shaved her head for the final scene to further show her commitment to the film.

McCord’s acting is beyond reproach as she goes the extra mile to make herself as unattractive as possible while exuding the confidence of a predator. She embraces what it is like to be an awkward teenager seeking the approval of her parents while masking her inner desire for acceptance and love. Yet, in brief moments, perhaps with the flicker of a smile or faint acknowledgment in her eyes, we see the deep love she has for her sister and her family despite her desire to hide behind the walls she has created.

Excision is a 2012 feature-length film that premiered at the Sundance Film Festival. It was based on Bates’ well-received 2008 short of the same name and was Bates’ first film release. The film won the Best Feature award at the Boston Underground Film Festival in 2012 and netted Lords a Fangoria Chainsaw Award for Best Supporting Actress. Bates followed up his freshman release with such titles as Suburban Gothic and Trash Fire, both dealing with themes of loss and displacement.

Excision is currently available to stream on Amazon.