From Ego‘s opening moments, our protagonist dancing awkwardly in her room, fumbling through dating apps, constantly surrounded by the background noise of pandemic radio and national lockdowns, there’s a true joy and connection. Being young and impulsive and having to massively transform your life to accommodate a global pandemic is an experience that many of us have been through and are still enduring. The joy that can be uncovered despite that is so much more, and then, even beneath that, is a sadness.

I suppose it’s only natural that I should see myself so well reflected in a film like Ego, a doppelgänger thriller about self mediation and isolation paranoia by director Alfonso Cortés-Cavanillas.

Ego is a truly relatable film, and lives and dies on that merit. Set in Madrid under the shadow of the COVID-19 pandemic, it follows Paloma, a young gay woman who browses dating apps only to match with…herself. It’s a delightful turn on doppelgänger horror tropes (reminiscent, initially, of Daniel Goldhaber’s terrific Cam) that uses our isolation to stunning effect at a time where truth is liquid and reality is ever-mediated. María Pedraza leads, with a truly spectacular performance, at once palpably paranoid and quietly sinister, showcasing incredible fragility and frightening competence in equal measure, utterly infectious in her double-role.

It’s that aforementioned paranoia, though, that shapes this film—a worry of a time so overwhelming mediated, so dependant on invisible channels, so devastatingly isolating, where beyond the screen all we have is ourselves to keep us company. Cortés-Cavanillas’ film manages to capture that isolation and the anxiety, joy, and even onanistic eroticism that can come with it to brilliant effect, weaving from one emotion to the other, floating in our now-dreamlike reality, following Paloma through it. 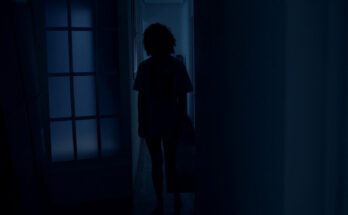 Paloma’s presence as a mentally ill queer woman adds so much to the spell this film conjures, as things take a turn for the worse her health worsens in a way that feels less like Hollywood “craziness” and more like worsening mental illness as a result of trauma, it’s refreshingly honest and effective enough to trigger my anxiety (something I didn’t think I’d be praising, but here we are). She is paranoid, delusional, frightened, and impulsive, she has mood swings, violent outbursts, and heady manic episodes. In many ways, her mental illness is a mirror image of mine, warts and all.

It’s so genuinely wonderful to see a character whose mental illness and queerness are taken so seriously, especially when that character is the center of the story. We are rarely ever pulled from Paloma’s perspective, the camera spirals anxiously in moments of crisis, rebounding dizzying panic attacks of motion, settling in peaceful moments, allowing for the soundtrack to twitch with the background radiation of unease.

Of course part of this is Pedraza’s stellar performance, allowing Paloma’s vulnerabilities to show while never showing those moments of pain, anger, and delusion present as weakness, but so much is in the craft, the writing, the audio, and visual dynamics. It’s rare to see filmmaking that is devoted to seeing through the eyes of the paranoid, impulsive, and traumatized, rather than ogling at our harm or shocking us with the blunt force of our trauma. Echoed in its repeated, constantly altered motif of Cyndi Lauper’s “Girls Just Wanna Have Fun,” it sees the joy that can come from our being and the fear that writhes through us, peering beneath the sound to the lyrics, with little in the way of belittlement or shame: just honest, tearful, emotional truth.

Of course, Ego is also, y’know, a horror film, and a deeply frightening one at that, much of this coming from Paloma’s centrality. An anxious mood dominates the film, an inward-facing paranoia spouting out as a miasma of darting eyes and murmuring lips, building into a coiled tension that explodes into strangeness and whimpers into a plaintive sadness. Crisis which burns bright and flickers out. It’s told precisely and develops through delightfully subtle scares that make their impact through the shared experience of lockdown.

We’ve all been through this. We’ve all felt scared and alone and isolated and confused. We are all, at some level, dependent on technology. Cortés-Cavanillas makes those fears manifest, and does so through Paloma, rebuilding a space where connection is comforting and yet one button press away from being severed. The result is as subtly tense and occasionally outright terrifying, as it is beautifully emotional, heartfelt, and passionate about youth.

Ego is a siren song of and to the young and impulsive, a scared and vulnerable thing full of our mania and isolation. Ego is a mirror, to me and no doubt so many other mentally ill queer people trapped in isolation. Beyond anything Ego made me cry, it tore down my barriers and saw right into me. I really couldn’t ask for more.

The UK premiere of Ego featured as part of Grimmfest Easter 2022. A preview of the film can be found here.