Paula D. Ashe’s remarkable new short story collection, We Are Here to Hurt Each Other, ends rather unexpectedly with an outro that doubles as a sort of statement of purpose. In this outro, Ashe discusses her relationship to her work, work that—in her own words—is sometimes written with the explicit purpose to harm. She takes no pleasure in this harm, she explains, but sees it as necessary to her goal of reckoning with the endless violence and horror of the world around her.

“I know some people read my work for the sake of shock, for the thrill of the transgression,” she writes. “But there are other people who read my work for solace. For understanding. For a bizarre and bitter reprieve.”

We Are Here to Hurt Each Other succeeds on both levels. For those looking to be shocked, there’s plenty to find here. Horror authors tend to advertise their work like carnival barkers luring passersby into a haunted house, claiming that their books offer the darkest, sickest, most violent, and depraved takes on the genre yet. Few have the skill to follow through on these promises, but Ashe is the real deal. Her writing is genuinely disturbing, genuinely transgressive, all the more so because of the empathy and emotional nuance running through each sentence.

Take, for instance, the story “Bereft,” one of my favorites in this collection. We begin with an unnamed narrator spending a last moment alone with her sister’s corpse following her sister’s suicide. In another pair of hands, this set up alone might be mined for scares, but Ashe understands that suicide and grief belong to the realm of the everyday. This isn’t to say that these horrors are taken lightly. In fact, it’s the grounded way that Ashe details her narrator’s reactions to her circumstances that makes for such a profoundly unsettling experience.

This is why “Bereft” also highlights Ashe’s skill at unpicking the complex emotions and motivations of her characters. While readers will be shocked as they discover what the narrator does to her sister’s body, they will also be forced to experience the emotional weight of this choice with a degree of nauseating intimacy that will make them want to crawl out of their skins. The horror Ashe employs is not the horror of ideas, but the horror of actions. The plain fact of the desecration of the sister’s corpse is horrifying, but it’s the experience of living through every well-chosen detail that inspires true terror and revulsion. And then, as the tale unspools, the growing understanding of the full monstrous humanity of the act serves both to intensify and mitigate that terror.

While “Bereft” is a clear standout, it’s not alone in its deft handling of truly complex characters. The people (and others) populating Ashe’s stories are not conniving villains or innocent naifs; they are not even flawed-but-lovable protagonists or hardened anti-heroes. From the murderous Deacon’s wife to the cowering child to the noir-inflected homicide detective, they are all almost overwhelmingly specific creatures made of flesh and despair and desperate hope. Watching them drag themselves through their lives on hands and knees is all the more poignant and terrible because we know both what they’ve been through and what they’re capable of. The tenderness with which Ashe treats these characters, not despite their wretchedness but because of it, is genuinely touching.

This strange grace extends between characters as well. In “Carry On, Carrion,” a local spook inspires their 12-year-old neighbor to cut his own face off while he’s supposed to be getting ready for bed. As the boy is taken away by paramedics, the spook—called “Melty Face” for reasons you might be able to guess—sneaks into the boy’s house to witness the carnage he’s left behind.

“The bathroom became an abattoir,” Melty Face recounts. “Scattered around the sink I found discarded strips of skin wrapped messily in balls of tissue paper. The gesture made my heart hurt.”

Melty Face acts on behalf of a being called The Man with the Face Full of Teeth, who appears throughout the collection. Though emotional realism grounds these stories, those that aren’t outright supernatural are all at least tinged with the mystical. Gods are made of monsters and given names like Priest of Breathing, Queen of Prickling Things, and Thornmother. Ashe is a self-professed “Hellraiser fanatic,” and it is here that we can see Clive Barker’s influence most clearly in her writing. Much like some of the best of Barker’s work, these gods serve to bridge the bleak violence of the physical world with a kind of spiritual transcendence. 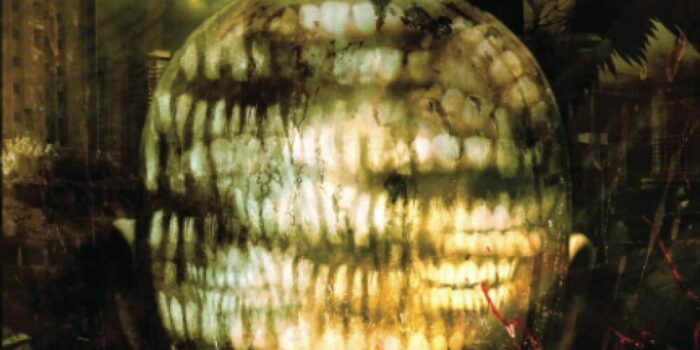 In “All the Hellish Cruelties of Heaven,” Ashe writes, “Pain is the source of all matter. It is the force that holds the universe together, that will tear it apart, only to rebuild again. Throughout the ages, humanity asks over and over again ‘why are we here?’ and then pretends as if the Void does not bellow the answer back every single time. We are here to hurt each other. Again, and again, and again, in perpetuity.”

In her outro, she puts it more simply: “Hurt people hurt people.” And within the context of her work, this truism transcends its typical bumper-sticker wisdom. The people of these stories suffer in ways that are both mundane and remarkable and then turn around to inflict suffering upon others. They love and hate those who harm them, just as they love and hate the ones they harm. They are the abuser and the abused simultaneously, not as a matter of cause and effect, but as a simple fact of existence. Just as in life, no one is able to walk through the world unscathed, and, perhaps more importantly, no one walks through the world without stomping on someone else’s teeth. There is no should or shouldn’t in this message, no moral directive or plea for understanding. There is only a stark statement of fact. Hurt people hurt people. We are here to hurt each other. And then, from these statements, a question emerges: how do we live like this?

Looking for more about We Are Here to Hurt Each Other? Check out my interview with the author, Paula D. Ashe!