Eric LaRocca became a viral sensation after the original publication of Things Have Gotten Worse Since Last We Spoke, which was nominated for a 2021 Bram Stoker Award. In July of 2022, it was announced that their debut was to be rereleased in hardback via Titan and include two original short stories entitled Things Have Gotten Worse Since Last We Spoke and Other Misfortunes. This is the first time I’ve read any of LaRocca’s work, and I cannot imagine the novella being placed away from its sibling stories. 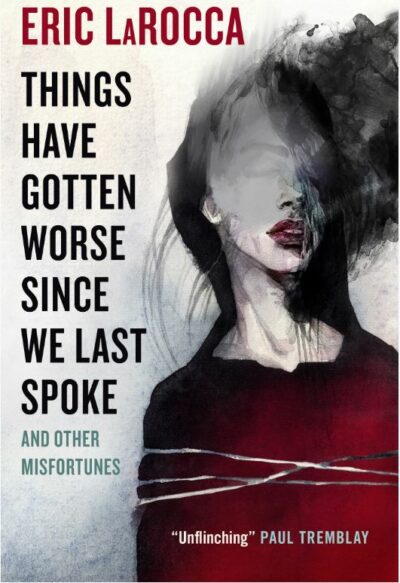 The novella which is the book’s namesake, Things Have Gotten Worse Since Last We Spoke, starts off as a sweet queer story about two women who seem to have found each other in the most unlikely places: an online forum, selling an apple peeler. But that is not just where the tale starts. LaRocca uses the narrative device of found documents to set out the tale. The author’s note serves as a preface to the e-mails and instant messages (IMs) we’re about to read, setting out a discourse between two women, one of whom is dead, while the case against the others’ involvement is still underway. The e-mails and IMs, alongside the notes referencing the police department build up a world of reality for the reader, equivalent to that of a found footage film.

Throughout the tale of Zoe and Agnes, LaRocca masterfully executes a tale of desperation and conveys how far people will go to feel secure. LaRocca carefully concocts the identities of each of them through how they present themselves via online messaging, and through beautifully pained prose, portrays the loneliness of Agnes, alongside the misunderstood pain of Zoe. At first, Zoe begins as an innocent helping hand, but soon we learn of her more sinister motive. Agnes represents queer people who have been excluded from their families, and this desire for care and safety ends up leading her down a peculiar path.

What’s interesting about these found documents is how much voyeurism it imposes on the reader. Using this device in horror is deceptive because as readers we feel nothing can shock us because it’s already done, already over, but LaRocca uses this to their advantage. In the downward spiral is where LaRocca unlocks the terror element of horror, wherein everything the reader thought they knew about the relationship between the two women turns upside down. While reading the inner workings of these women’s minds, it wasn’t until I read the most wonderfully twisted outcome of Zoe’s manipulation that I realised I was the voyeur, and I wanted to turn away. These unexpected, gruesome moments are where LaRocca’s style truly shines in beautifully, unsettling prose.

“The Enchantment” is the first original story in Things Have Gotten Worse Since Last We Spoke and Other Misfortunes, which follows a heavily religious couple as they grieve their son, in a world where the existence of an afterlife has officially been refuted. The concept is intriguing, and a look into the influence of religion for those of us who did not grow up around it, but it also perfectly encapsulates the desperation of grief as we scramble for something to cling to in a time of pain.

In this tale, LaRocca places the characters on a lost island for the winter to confront only themselves. The story toes the line between critiquing the reliance on religion and examining how for many, it is a necessary coping mechanism. Although the story explores these heavy elements of grief, it is difficult to empathize with the characters in some places as they do not have as much substance as you would hope from a couple in crisis. However, this could comfortably reflect them in a period of emptiness, going through life as their son requested rather than living the life they wanted to.

Further, LaRocca’s exploration into the supernatural, and horrific conventions come through in an effective, yet simple style. Although the ending wraps up the story in an imaginative way, that offers closure to an initial scenario, the payoff does feel rather empty. While the solution is given to the beginning predicament of the tale, by the end, it felt as though the characters needed to be healed instead. Overall, the atmosphere was the strongest part of this story, taking elements of the gothic, The Shining, and even Moby Dick to haunt the reader with the idea of trying to find something that can never be found.

“You’ll Find It’s Like that All Over” was the most page-turner tale in Things Have Gotten Worse Since Last We Spoke and Other Misfortunes. It follows an older man who begins to make bets on strange challenges with his isolated neighbour. The bets are odd, but begin relatively normal, escalating in difficulty and prize money, until the final task brings into question the sanity of both the antagonist and the protagonist. It’s cozy, classic, mysterious horror, however, the motives are a little too surface level. There is no big reason the protagonist needs to put themselves through hell for money, nor is there a motive to prove something in the competitive nature of the bet. Therefore, although the story is wonderfully well written, maintains queer representation, and explores an imaginative concept, the lack of motive causes it to fall a little flat.

Things Have Gotten Worse Since Last We Spoke and Other Misfortunes is a wonderful collection, whether it is the first time you’re reading LaRocca’s work or the hundredth. Each story explores the horrific limits humans will go to in order to feel safe, whether that’s found in another person, religion, or wealth. LaRocca, in the afterword, regards the tales as “tethered by the human need to connect with someone, something else.” The quote encapsulates the essence of the tales, and I would argue that the extremity of this need is what makes each of the tales fit so well in the horror genre. What is also important to note is the seamless exploration of queer experiences in each of the tales—endlessly important in a genre often dominated by heteronormative experiences.