At first blush, it might be tough to imagine that a 100-year-old horror film can still hold up today. While all genres evolve over time, horror arguably changes the most, as the things that scare one generation will often seem pretty ordinary to the next. To take just one example, audiences 50 years ago were utterly terrified by a girl vomiting pea soup, but it takes a bit more to get a similar reaction out of people today. Horror fans are simply too desensitized these days to be affected much by decades-old scares, so it’s easy to think that Nosferatu, which turned 100 earlier this year, has nothing left to offer modern audiences.

But you’d be dead wrong. Nosferatu isn’t just a historically important movie that the horror genre has long since left in the dust. It’s still one of the best, most influential films ever made (in any genre!), and its scares still pack a surprisingly creepy punch that will stick with you long after the credits roll. It more than holds up today, so let’s dive into this timeless classic and see why it’s still great a century after it was first released. 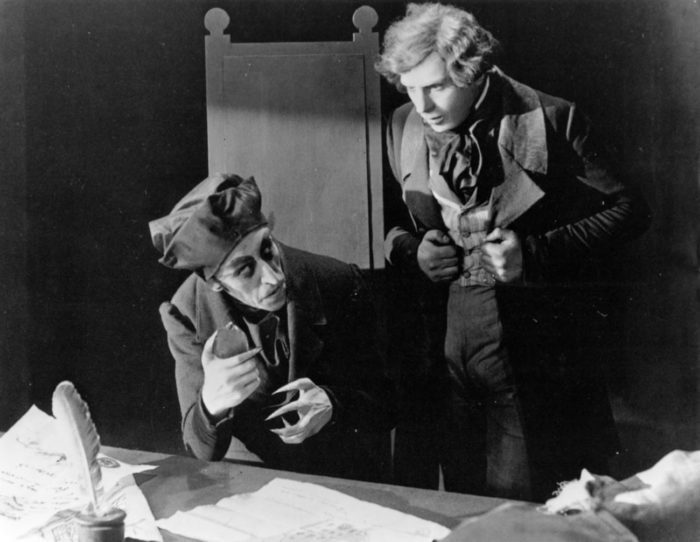 On the most basic level, Nosferatu is a great movie because it tells a great story. As most hardcore horror fans know, it’s an adaptation of Bram Stoker’s classic novel Dracula, and that alone helps us understand why this movie is still a great watch. But not every Dracula adaptation is great, or even good, so that alone can’t be the reason why Nosferatu still holds up. There has to be something that separates it from the countless second-rate Dracula movies that litter the landscape of horror history, and I would suggest that it starts with the way this film tells its story.

With any Dracula adaptation, there’s always a temptation to rush through the opening acts of the story to get to the “good stuff,” but Nosferatu wisely avoids that pitfall. Instead, it takes its time telling the story of Thomas Hutter (the film’s version of Jonathan Harker) traveling to Transylvania, meeting Count Orlok (the film’s version of Dracula), and learning the truth about him, so it lets the story breathe and unfold in a very natural and satisfying way. Admittedly, this might make the movie feel a bit slow if you’re looking for thrills and chills every few minutes, but if you’re looking for a well-told story, it’s just about perfectly paced. 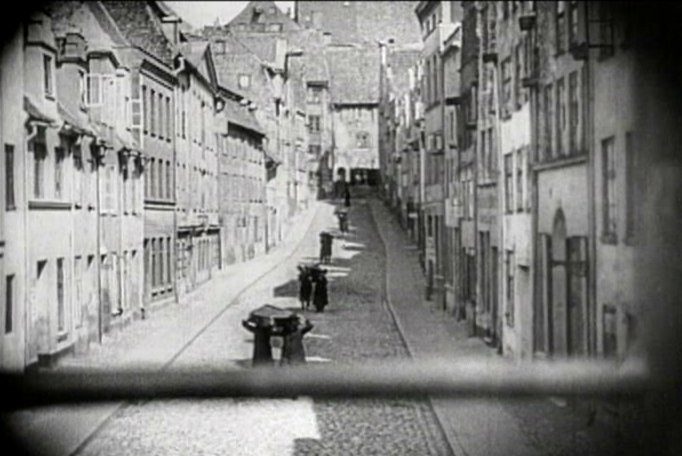 On top of that, Nosferatu also puts a pretty unique twist on the Dracula story. Unlike most iterations of Dracula, Count Orlok doesn’t turn his victims into vampires. Rather, he just kills them, so the bodies quickly begin to pile up after he arrives at his new home.

Now, the townspeople there don’t know anything about vampires, so they think there’s a plague going around, and the movie makes a point to hammer home the devastating impact this “plague” is having on them. Most notably, there are multiple scenes of people carrying around the coffins of their dead loved ones, and there’s even a moment when Ellen Hutter (the film’s version of Mina Harker) sees a procession of about five coffins being carried in a row down the street. It’s pretty moving, and it gives you a glimpse of the pain and terror these people are experiencing.

Admittedly, this little twist on the story probably didn’t mean much to the movie’s original viewers, but in 2022, you can’t help but notice it. There have been so many Dracula adaptations in the past century that they’re practically their own subgenre, and as I said before, a lot of them are very forgettable. So to stand out from the pack, Dracula movies need to give us something unique, and this plague storyline does exactly that. It separates Nosferatu from its cinematic descendants and makes it more than just the same old Dracula story we’ve seen countless other times.

What’s more, this unique twist also makes the film hit much harder in our modern context than most other Dracula movies. We’re in the midst of a global pandemic, and while we don’t normally call COVID-19 a plague, the parallels between our current situation and the plague in this movie are impossible to miss. This makes Nosferatu especially suited to our modern context in a way almost no other Dracula adaptation is, so in a certain sense, it’s actually the most modern version of this classic story. 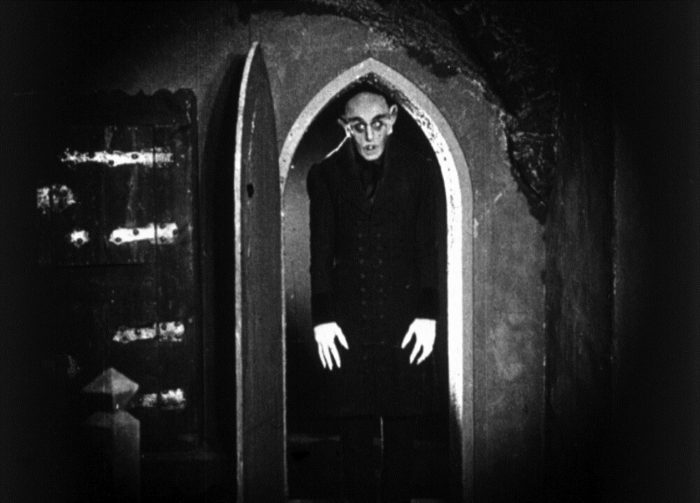 Next, we have the titular Nosferatu himself, Count Orlok. In a world where vampires are often more sexy than scary, this bloodsucker is a breath of fresh air. With his long ears, talon-like fingernails, oversized nose, and fangs that don’t even fit inside his mouth, he must’ve caused quite the stir back in 1922. Nobody had ever seen anything like him before, so he probably gave his original audience an almost Exorcist-like scare.

Granted, he doesn’t have anywhere near that effect on us today, but he still looks great. In fact, he’s so cool that movies like Nosferatu the Vampyre, Salem’s Lot, and Jakob’s Wife have borrowed his distinctive features for their own bloodsuckers. He’s a legit vampiric archetype, and as good as the imitators are, it’s still tough to beat the original.

But it’s not just Orlok’s look that holds up. It’s also the way he moves. Or, more accurately, it’s the way he doesn’t move. For example, when he walks, he often moves his legs but keeps his upper body almost entirely still with his arms down at his sides, and there’s even a scene where he rises up from his coffin without moving a muscle. Again, he’s stiff as a board, and his body just tilts itself up from its sleeping position to a standing one.

If you’ve never seen Count Orlok in motion, it’s tough to understand exactly how uncanny his movements really are, but trust me when I say they’re creepy as hell. The way he moves is just wrong, and when you combine that with his classic look, you get a terrifying monster that more than holds up a century later. 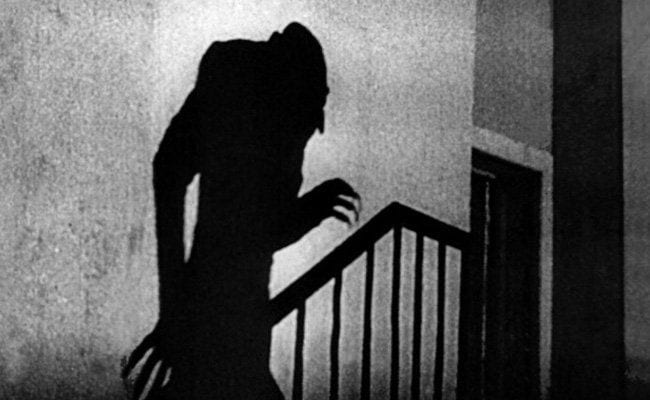 Last but not least, we have the super creepy way Nosferatu uses shadows. There are a few scenes where this comes to the fore in a pretty big way, and there’s one that’s even become an all-time classic horror image. Near the end of the film, when Orlok is going to Ellen’s room to drink her blood, he has to walk up some stairs to get there, but you never actually see him do it. Instead, you just see his shadow go up the stairs in one of the most powerful images in the entire movie. It lets us know what’s going on without letting us actually see it happening, it has an almost Lovecraftian air of mystery about it.

Then, when Orlok gets to the top of the stairs and begins to enter the room, the scene becomes even creepier. From this camera angle, we should finally get a glimpse of the vampire, but we somehow don’t. Instead, we still only see his shadow. It’s almost like his shadow is him, but the movie never explains what exactly is happening. It just lets us stew in the mystery, and for my money, that’s way more effective than the cheap scares we get in a lot of modern horror films.

This scene is so great it’s been copied countless times, in everything from Frankenweenie to Wes Craven’s New Nightmare, so even if you’ve never seen Nosferatu, there’s a good chance you’ve seen this visual. It’s hands down the best and most iconic example of the film’s excellent use of shadows, so it really embodies yet another creepy element of this movie that still holds up a century later.