I am a huge Barbara Crampton fan. Every time she’s in a movie, she brings something completely different to the table, and everything’s better for it—sure, she’s best known for her scientists-drawn-into-horrible-experiments in From Beyond and Re-Animator, but even in more recent spooky media she’s proven her range as an actor. From the uptight mother in You’re Next to the otherworldly horror host of Beyond the Gates, there’s not a single thing she’s done that I haven’t loved (and I fully expect her voice role as Mom in Back 4 Blood to continue that trend). All this to say that her latest film, SXSW festival hit Jakob’s Wife, is another fantastic flick that puts her in the lead and lets her absolutely run with it.

Directed by Travis Stevens (formerly of the wonderfully creepy Girl on the Third Floor), Jakob’s Wife follows Annie, a middle-aged preacher’s wife who seems to have taken the safe route in her life. She’s in a steady marriage, but her husband constantly talks over her. Her secret longing for a more adventurous life comes true in the worst possible way when she’s attacked by…something. What follows is Annie undergoing a horrifying transformation and taking advantage of it to finally take control of her own life, no matter what her husband Jakob (Larry Fessenden in what may be his best role ever) might have to say about it. 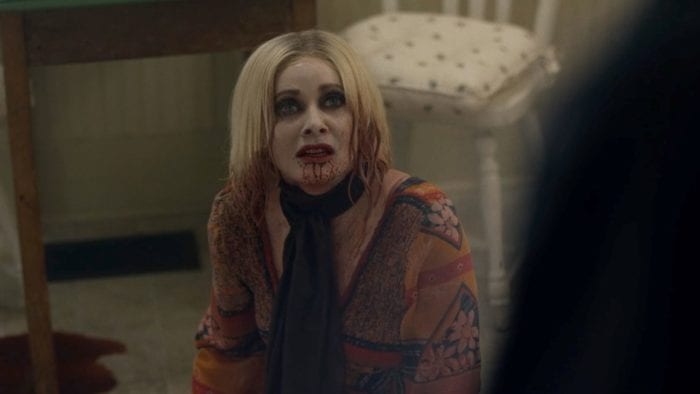 Yes, this movie is about vampires, so you’ll probably be able to predict a lot of the plot beats, but what lifts it above just another bloodsucker story is the way it balances low-key, awkward human comedy with moments of surprising body horror. In one scene, Annie deals with her mounting vampirism by ordering raw meat at the grocery store; in another, a vampire rips a victim’s head clean off, causing blood to absolutely gush everywhere. The best example of this is probably when Annie goes to the dentist, who points out some surprising changes to her teeth before we’re shown the effects of the ultraviolet dental lights on Annie’s mouth—and the results are far from pretty.

I clearly haven’t praised the acting in this film enough, so let me say this: Barbara Crampton absolutely steals the show as she always does. Before becoming a vampire, Annie’s quiet, reserved, but through all that, she clearly wants to be more than just Jakob’s wife. Afterward, her transformation is far more than her dressing less conservatively and developing a thirst for blood—she’s confident, she’s embracing her power, and she’s enjoying every minute of it. Larry Fessenden’s pastor Jakob manages to go from a completely terrible human being to a lovable dingus through the course of the movie, as well, as he deals with the horror of what’s happening to his wife and learns to shut his mouth every once in a while. He clearly wants to be the kung fu priest from Braindead but doesn’t have the skills, the personality, or the confidence to be it. You can’t say he doesn’t try, though, and through it all, he learns as much of a lesson as Annie does.

Those lessons—it’s not a sin to take control of your own life, your partner is not a possession for you to demand obedience from, and vampires are really, really scary—are delivered as much through the characterizations as they are through director Travis Stevens’s commitment to going all out with the practical effects. The vampires in this film share more in common with rats than with bats—nasty front teeth and red eyes and all—and it makes them that much more frightening. When the blood spills in Jakob’s Wife, it SPILLS, and these vampires aren’t afraid to make a huge mess when they feed. All of this together helps balance the comedy, horror, and drama of the story, and it hits all three of those genres repeatedly and with incredible skill. 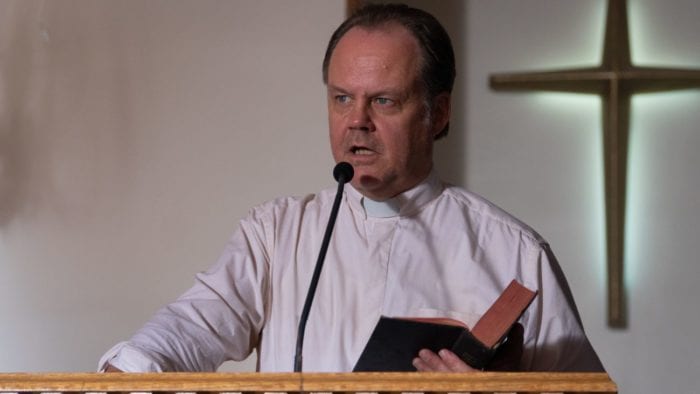 Yes, I did say drama. Between the funny and scary bits, this story has a lot of heart to it. Annie’s dissatisfaction with her marriage leads her to be tempted to cheat on Jakob with an old flame, but she has regrets for even the thought of it. Jakob barely seems to notice his own wife until the supernatural events around them get too strange to ignore. Their relationship feels real thanks to their absolute lack of chemistry—and as things continue to unfold, we start to get glimpses of the chemistry they once had. I began the movie asking myself why Annie married Jakob, and I ended it completely understanding why. Everyone here feels human, even the vampires, and it’s a credit to both the director and the cast for bringing the characters to life and undeath. I’d hate myself if I didn’t mention Phil “CM Punk” Brooks’s very silly cameo as a sheriff’s deputy, or Bonnie Aarons’s terrifying turn as The Master—you may know her as Valak, the demonic nun from The Conjuring series, but here, she puts in a solid performance where she actually gets to say some words for once.

Shudder has been on an absolute tear lately, picking up some of my favorite festival releases and delivering excellent exclusives as well, and Jakob’s Wife is easily another point in their favor. If you’re looking for a familiar-yet-unique take on vampire stories, a skilled blend of things to laugh at and scream at, or just more proof that horror movies have some of the best acting performances out there, look no further than Shudder, starting August 19th.