It’s safe to say FromSoftware‘s newest title Elden Ring has completely consumed my life. This is my second Souls game after Bloodborne and it’s been a blast. While I was expecting some grotesqueries, I wasn’t prepared for the sheer amount of wonderful/horrible critters. I like to call this particular brand of baddie “sick nasties” and I love them dearly. It feels like my personal mission to discuss these enemies in what I hope to be a multi-part series, as I have yet to complete the game, and look forward to what future adventures bring to light.

Spoilers for Elden Ring: Areas discussed include Limgrave, the Weeping Penninsula, Liurnia of the Lakes, Ainsel River, and Caelid. 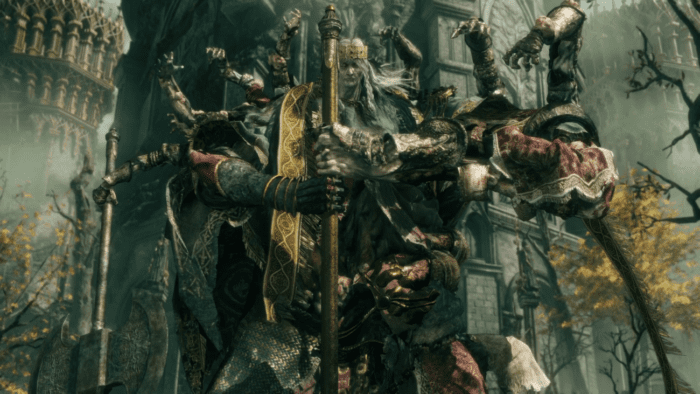 The first major boss of the game is the fittingly named Godrick the Grafted. Ruling over Stormveil Castle, Godrick is a truly imposing figure and sports a variety of extra arms and legs, some bent at odd angles and entirely useless.  The fact that his proportions are all over the place makes it extra weird. He has several legs attached at the hip and his feet are covered in toes, making them a sort of hoof shape. The story goes that Godrick sought to become all-powerful and started experimenting with grafting procedures, adding the strongest warriors to his own flesh. 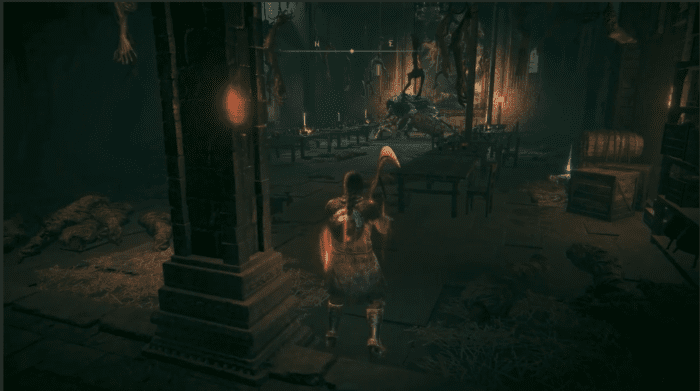 Assuming he tested this on others before himself, grafted enemies are located throughout the Lands Between. Grafted Scions, who resemble spiders and cover themselves with cloaks; Revenants, similarly arachnid in nature but with the added ability to teleport; and hand spiders, which are horrible and self-explanatory. (Handspiders can also hide in the ground, with only the tips of their nails showing like a bear trap before they launch out and crush you.)

An NPC on the way to the castle named Roderika seems to suggest people pilgrimage to Stormveil, becoming grafted willingly: Oh, you’ve come to be one with the spider? Well, that makes us two peas in a pod. But I don’t have your courage. It’s scary, you know. Having your arms cut off. Or legs. Or your head. I want to be like everyone else, but I’m just too scared. The dining hall (shown above) appears to be its lair, with limbs hanging from the ceiling and stacked in piles in the adjacent rooms.

Update: Yesterday YouTuber Zullie the Witch removed the Grafted Scions cloak and surprise it’s even worse. The face is youthful, suggesting the original body was that of a young man forced into this fate. It has several spinal columns, with the main back taken from a Troll, with several human ones attached sideways.

Halfway through the Godrick fight, he starts screaming and chops off his left arm. Then he shoves his wrist into a dead dragon corpse that happens to be lying around, does some kind of magic, and whoops, now he has a fire-breathing dragon hand. A wonderful over-the-top way to welcome you into the world of Elden ring and what it’s capable of.

Also, if you leave and return to Godrick’s arena after defeating him, you can see his normal, non-grafted self. An angry shopkeeper NPC is stomping Godrick’s face repeatedly into the dirt. I can’t imagine it was fun living under his rule, so I suppose you really can’t blame him! 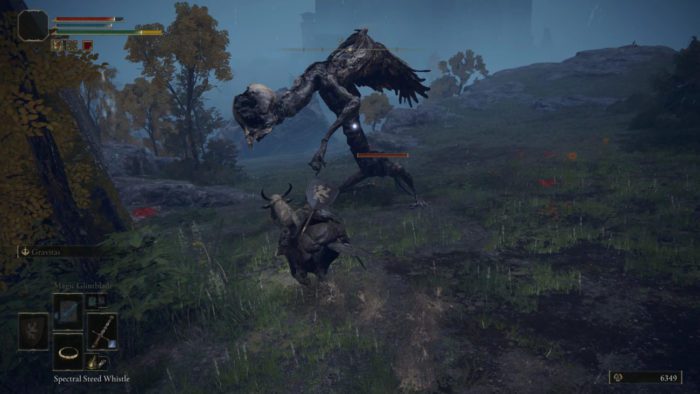 What strikes me about the Deathbirds is that you can miss them completely, they only appear at night in specific spots. The first time I encountered one, I died, and when I respawned, it was daytime so the Deathbird was gone. I didn’t see what it was called so I had no idea how to get it back! And that kind of made it spookier! They’re giant, flightless skeletal birds that wield canes. Something about the small, seed-eater skull and emaciated humanoid body is just creepy. It also has a long, U-shaped neck, giving it an exaggerated slouch. You’ll also notice the skull is cracked open, and whatever brain the creature has is partly exposed. 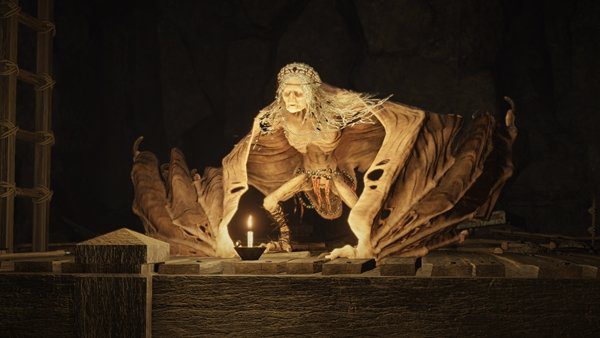 Always found with a gaggle of regular bats hanging around, the Chanting Winged Dame is a sort of harpy-vampire hybrid. The most notable feature is, of course, their singing. The first time you meet one of these ladies you’ll probably just hear their voice; a soft, soothing Latin chant. They can even appear more “human” from a distance, with their knees up to their chest and wings wrapped around appearing like a cloak or robe. Once you’re close they will scream in your face, causing a TON of damage and poisoning you. It also wakes up the entire group. As far as I’m aware, this is the only enemy in the game that sings. Someone even translated the Latin and the lyrics are very fitting, discussing a golden one, motherhood, and weeping. 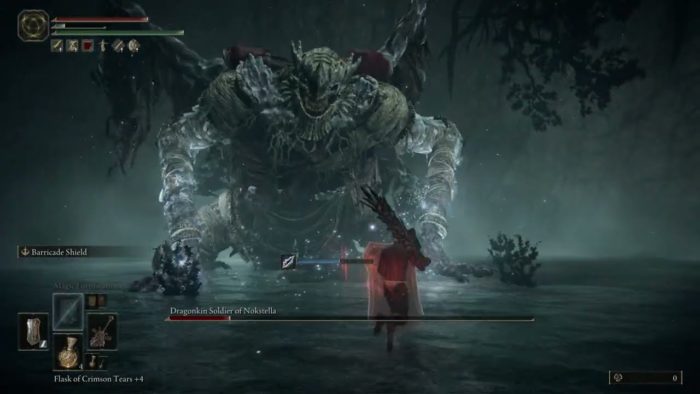 Like the Deathbirds, Dragonkin Soldiers cannot fly. FromSoftware games are known for their lore being hidden in item descriptions, and not a lot is explicitly told to the player directly. From what we know, Dragonkin were an attempt to make dragons or dragon-human warriors. This seemed to backfire, as not only can they not fly, but they must crawl on their hands and knees to get around. They’re referred to as an “imitation” and are only found underground, rotting and covered in wrappings. The ones you fight I presume are reanimated corpses.

Deep beneath the Liurna region lies the Uhl Palace Ruins. As you round a corner, suddenly small purple meteors are launched at your head in quick succession. After ducking behind a pillar and looking around, you’re greeted with the Malformed Star. Hanging down from the ceiling, this bizarre enemy looks like a dragonfly, except it’s covered in large crystal spheres, or perhaps eggs? It has several large insectoid legs, and if you’re brave enough to approach the head, you’ll see it’s a human skull with giant bug pincers. Something about this thing gives me the willies—maybe it’s the combination of human and insect features. Thankfully, Malformed Stars don’t respawn when you kill them. They do relate to another creature, but we’ll get to that in a future article!

They say the no.1 thing to do when you reach Caelid is…leave. It’s a horrible, rotting wasteland full of bloodthirsty dogs, exploding corpses, a huge swamp, and did I mention DRAGONS. A teleport trap in Limgrave sends you to a tunnel in Caelid, and I know I’m not the only one who died to these strange enemies: Prawn Miners. Large isopod creatures with tons of human arms, they both use a spear and magic, which homes in on you from a distance. They’re sometimes called Lesser Kindred of Rot, and appear to worship the rot itself. Some are praying to effigies, their many hands raised to the sky. 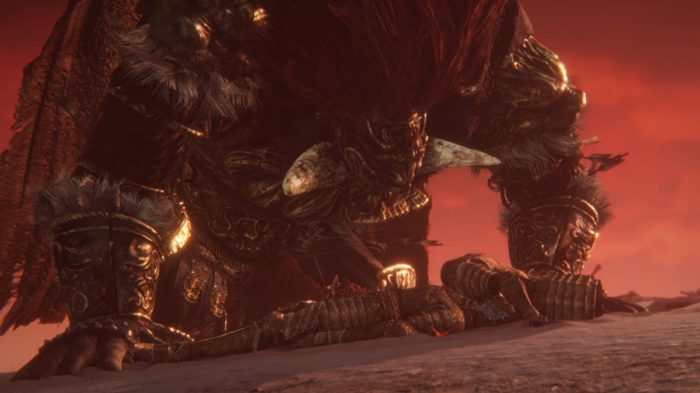 Finally, the big baddie of Caelid is none other than Radahn, legendary warrior and stepbrother to Godrick from earlier. Once a fearsome general on the battlefield, Radahn is being consumed by rot and now feasts on man and beast alike, constantly wandering. You’re invited to a Festival at the Redmane Castle, with a single goal: Kill Radahn. This fight is not only meant to show off the game’s open-world with a huge battlefield and multiple summonable allies but the sheer size and strength of Radahn himself is terrifying.

With twin blades, rains of arrows, and gravity magic, he zooms around the arena incredibly fast, all while astride his poor horse, Leonard. It’s said in the items that Radahn learned gravity magic to continue to ride Leonard, his faithful steed, without harming him…but I don’t know if that’s the case anymore as sometimes the horse is crushed during attacks. The first time I saw him I thought he was going so fast he wore down his feet into nubs like an eraser! Finally, when you whittle Radahn down to half health, he shows why he’s named Starsourge. He shoots up into the sky and crashes down with all the force of a meteor doing massive damage. This boss was so difficult they actually made him easier with an update. All pre-patch Radahn fighters…You are my bros. We lived it, man.

With the sheer size of Elden Ring’s world, I’ve only scratched the surface when it comes to amazing and disgusting enemies. Join me next time as we return to the Lands Between! 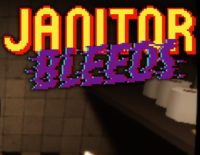