Today I’m once again diving into the world of Elden Ring to bring you the biggest, baddest, and most horrifying monsters the game has to offer. I will be using personal observations as well as item descriptions to parse out info, as FromSoftware games don’t make this stuff easy. If you missed Part 1, feel free to check that out first. As we travel deeper into the Lands Between, the creatures get weirder—so get ready. As usual, there will be spoilers! 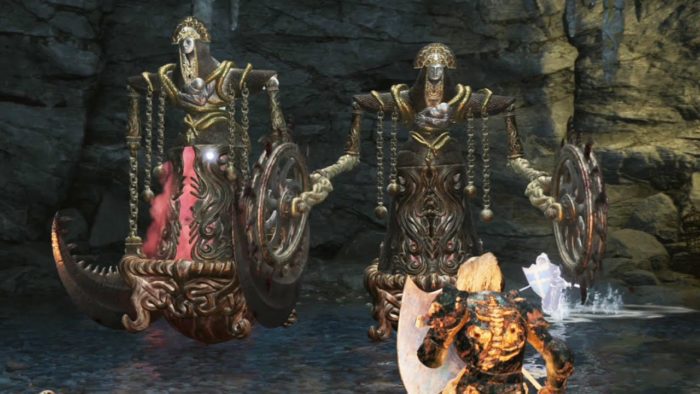 The first time you see these Iron Maiden-esque contraptions will most likely be during a loading screen as one of the wallpapers the game cycles through. There are several dotted around the map and one of the most intimidating enemies in the entire game. Despite their large, bulky frame they can move incredibly fast and will rush at you with either their sickle or wheel arms, depending on the variant. Their other form of attack is to open their chest cavity, extending several fleshy tendrils that grab you and trap you inside, doing massive damage. An item gives more details: “The Abductor Virgin is being controlled by an unknown creature that rests within it, only by opening its chest will it reveal its root-like tentacles.”

There are two interesting aspects to the Abductors: Patches mentions a singular machine that is still “working”. Traveling to the bottom of the Raya Lucaria Academy, if you let this Abductor “eat” you and die, you will respawn at the Volcano Manor. Were the Abductors a form of transportation, long ago? They were possibly created by Rykard, lord of the Volcano Manor and an accomplished sorcerer. Once you reach the Manor proper, you might notice the Abductors also bear a striking resemblance to Rykard’s wife, Lady Tanith. Did he create the ultimate killing machines in the image of his love? That’s romantic as hell.

Envoys are pale, blue humanoids with bulbous heads and torsos, almost like a snowman. Their horns double as instruments and hammers and can also shoot magic bubbles for long-range damage. To move, they roll in wide circles or bounce. There are three different types, the small (shown above), large Envoys, with long necks and extra cloth covering their breast area, and Giant Envoys, who wield an enormous horn and can easily crush the player under their weight. Their weird, lumpy flesh is also more visible on Giants, as the cloth cannot cover their big butts.

I’m unsure if these were once humans because while they do have feminine facial features, several items remark on their oddity: “No one knows what the cloth hides, but some claim to have heard a faint whimpering from inside. It must have been their imagination.” while the Envoy Horns all read “Originally an instrument, but one that cannot be sounded by a mere human. Or perhaps it is too early to sound the call.” Could this be similar to the angels of Revelations sounding trumpets before Armageddon? In Elden Ring, the events of the game take place after The Shattering, when the Elden Ring was broken into many pieces and a massive war broke out across the Lands Between. 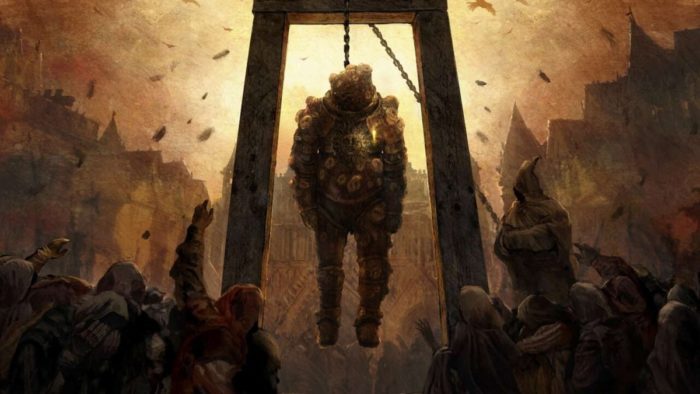 Introduced through the opening cinematic, the Dung Eater isn’t encountered until much later in the game. He’s a Tarnished like yourself, all vying for the title of Elden Lord. The game has several endings, one of which can only be accomplished by progressing through Dung Eater’s quest! Described as the most reviled person to ever live, the Dung Eater’s goal appears to be cursing the entire population and all future generations. While it’s unknown how he does this, we can only guess it’s not fun.

Tasked with gathering “Seedbed Curses” from his victims, you’ll be sure to notice they are all tied to chairs, slumped over with blood pooling in the groin region. Boggart, a blackguard who once shared a cell with Dung Eater, tells you he “..kills people and curses their souls… Does all sorts of sh*t to their corpses, to keep ’em cursed, forever. I ain’t seen nothin’ more disgustin’ in all my years. I ain’t never been more scared, neither. Rooted to the bloody spot… While ‘e did all that, to my friend…” When you return to Boggart, you find the man wounded. He begs you to kill him so the Dung Eater won’t get to his body, clearly terrified. I don’t blame him! 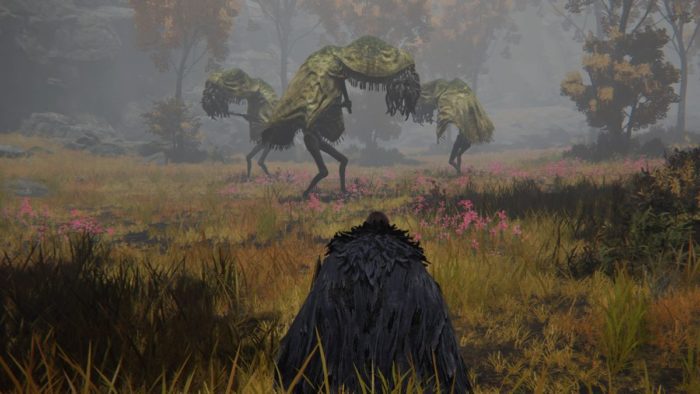 Appropriately named, Wormface (and the smaller ones, Lesser Wormfaces) are lanky, emaciated humanoids with writhing worms instead of faces. They appear in groups, patrolling the woodlands of the Atlus Plateau or resting in nearby ruins. A large boss version is resting in front of a nearby Erdtree. They attack by heaving violently and spewing a rotten substance which causes Death Blight—a status condition that is an automatic death when it reaches 100%, impaling the player on black spikey branches—and can grab you and munch on your face, letting you see the large leech-like mouth they hide under the worms. Sometimes they’ll drop to the ground and slam their face into the dirt which can be quite devastating as well!

Wormfaces have some interesting idle animations and behaviors, including praying at altars and holding their heads as if crying, giving them an overall pitiful appearance. Were these also once humans, cursed to this horrifying fate? 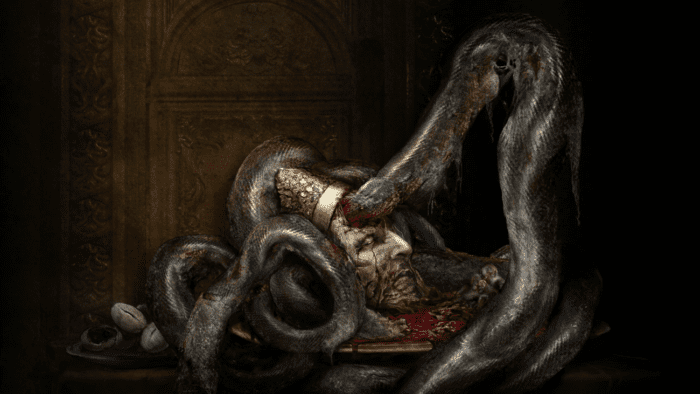 Rykard is easily my favorite boss and another character that’s mentioned in the opening cinematic. Every few bosses in Elden Ring are required to complete the story, so you could totally skip this part entirely, which is really interesting to me. Our personal game experiences can carry so much!

Praetor Rykard, like his siblings, was a powerful Demigod who defied the Golden Order (the predominant religion of the Lands Between). Underneath his castle on Mt. Gelmir, he discovered an ancient God, a massive serpent who he began to worship and perform sacrifices for. Eventually, he let himself be consumed by the snake. 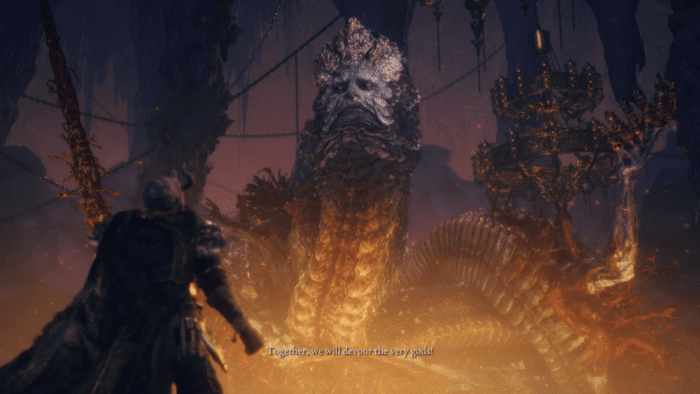 The battle with Rykard has a bit of deception: at first, you are greeted with the snake, a massive, towering serpent at the bottom of the castle. When you defeat it, a cutscene will play. The snake’s neck turns around, and on the backside sits Rykard’s face—he and the snake have become one. This is why he’s called the Lord of Blasphemy, having committed the ultimate sin. He greets you and pulls a sword covered in red flesh from the mouth of the serpent and proclaims you will join him and become family. This cinematic is amazing and I didn’t mind dying a few times during the fight because I wanted to see it play out again.

Again, if you come back here after defeating Rykard and speaking with his wife Tanith, you’ll find her consuming his corpse, proclaiming that the serpent can never die and will only be reborn. You can either leave her to it or kill her and end the madness of Volcano Manor forever.

Elden Ring is a massive game and each time I sit down to write one of these, I come up with another dozen enemies to cover. It’s an extremely dense world and I hope you are enjoying my looks into the monsters as much as I am! See you in the Lands Between. 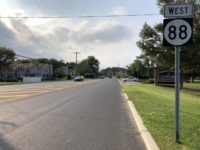