More often than not, sitcoms tend to have holiday-themed episodes which usually tend to be standout episodes for various reasons. NBC/Yahoo’s Community was no different, though no Halloween episode came from Yahoo’s less than stellar season 6. The Christmas episodes of Community were wonderful and were great standouts from the regular episodes…but their Halloween episodes? Well, those hit different. Dan Harmon’s Community was a force of nature that took sitcom genre stereotypes, as well as movie stereotypes and flipped them on their heads, making them meta and downright hysterical. As much as Dan Harmon loves comedy—with John Hughes (The Breakfast Club, Sixteen Candles) seemingly being a huge influence on him and garnering a memorial title card at the end of Season 1 Episode 1—it is fair to say he has a good knowledge of horror tropes and seems to be a fan of subverting them. Let’s take a look at the four Halloween episodes from Community that are just plain hysterical and fun. So, how about we rank them? 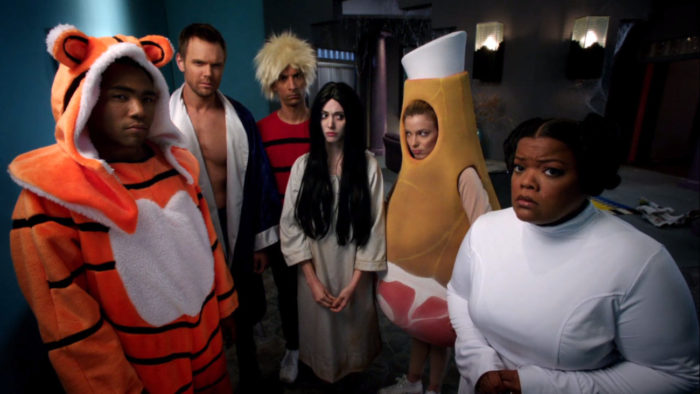 Each Halloween episode stands out in its own right, but the one that brings the lowest amount of pizzazz, in regards to Halloween episodes, is the sophomoric episode from Season 4 “Paranormal Parentage,” though there is a great emotional moment for Jeff Winger (Joel McHale), which is very rare. The episode starts with the study group preparing to go to a party that Pierce was not invited to, and shortly before leaving for said party, they get a call from Pierce saying he is locked in his safe room. Upon getting to his mansion, which is complete with a House on Haunted Hill-esque camera room, the study group has to search the house to find the code to the saferoom.

Jeff wholeheartedly believes Pierce is playing them, but the rest of the study group does not think so. What takes place next is a funny series of events that solidifies Community as a great piece of comedy gold. Hijinks ensue as the study group splits up to search different rooms, with Annie Edison (Alison Brie) and Abed Nadir (Danny Pudi) ending up in Pierce’s office. Abed finds a way to get into Pierce’s security room, the nod to HOHH, freaking Annie out with his disappearance. There is a great Nightmare on Elm Street homage where Pierce Freddys his way through a latex wall, scaring the rest of the study group.

This episode also has one of the all-time funniest lines in the entire series, where Pierce says, “Ghosts can’t go through doors, they’re not fire.” The episode ends on a sincere note where Jeff ends up trying to call his father. While this episode is canonically great, it relies more on the yuks and less on the spook. 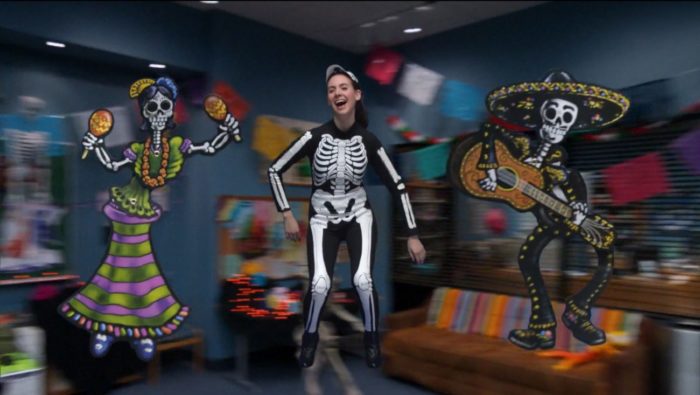 As a whole, this episode is really good and sets up a few canonical ideas. My favorite is Batman Abed, with this character making a few appearances and having many references thrown its way, but there is a clunkiness to the episode, which can probably just be chalked up to being early in their run. Besides the episode celebrating Día de los Muertos, there is little spookiness to it at all. The only reason I can rate this higher than “Paranormal Parentage” is because of a few prime lines, most notably when Annie refers to the holiday as Mexican Halloween, where Professor Chang (Ken Jeong) retorts, “which is actually quite offensive to people familiar with the Mexican holiday as a sexual position.”

The other standout line comes from Jeff when Annie starts crying to get him to come to her Día de los Muertos party. He says, “I saved a vial of your tears, and I’m using them to slowly build up an immunity.” Anyways, the episode is fun with some really good moments but gets a special shoutout for the Pierce dressed as Beastmaster drug scene, which is just comedy gold. And also, shoutout to The Beastmaster. 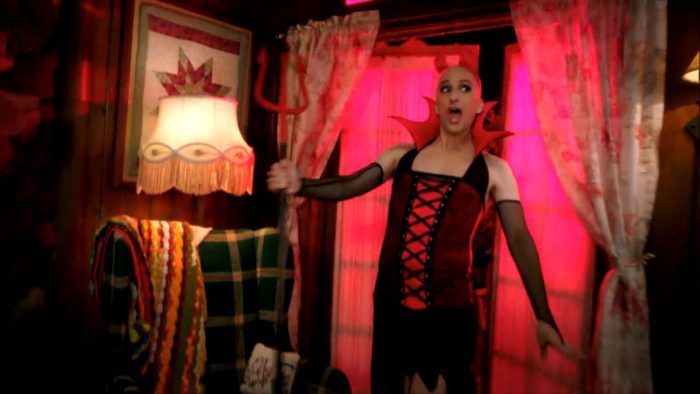 It was difficult to pick between this episode and the one that takes the cake because they are both amazing in their own ways. “Horror Fiction” is a great anthology piece that plays on the tropes of horror and the cabin in the wood subgenre perfectly. The episode is set up when Brita Perry (Gillian Jacobs) Britas some test results for a personality test for her psych class, and the results come back…and one of the study group members tests positive for homicidal tendencies. Brita decides to have all the group members listen to and tell scary stories and gauge their reactions and stories, which is hysterical in and of itself.

Go figure that Abed has one of the most meta horror stories. He and Brita kiss when they get to the cabin before deciding to listen to the radio. The song they listen to is Troy (Donald Glover) and Abed’s favorite jazz song “Daybreak” by Michael Haggins. Pierce asks why Abed is singing the whole song, and he makes the joke about the impracticality of turning the radio on in time to perfectly catch an important announcement, a trope commonly used. Abed and Brita then stand back-to-back with weapons and survive. It is meta gold. Also, shoutout to Shirley who, as Brita, refers to smoking weed as doing a “pot bong.” 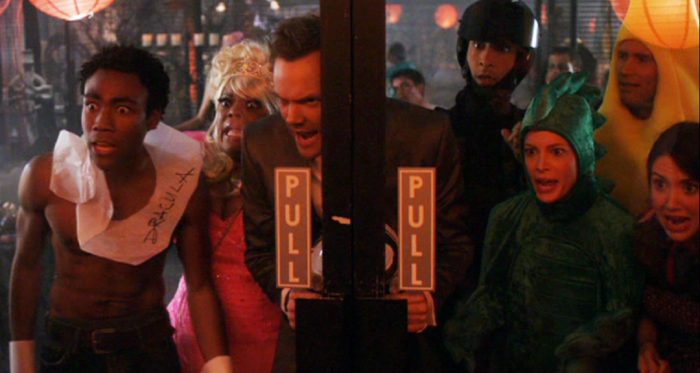 Wowza. This episode is all-around wonderful. It makes references to Dawn of the Dead, Alien, and so much more. Dean Pelton (Jim Rash) hosts a Halloween party at Greendale and has quite the attendance. It turns out that the food he has provided for the party is military rations, as well as toxic rations. These rations turn the people who eat the toxic food into zombie-like people, experiencing symptoms akin to rabies, who want nothing more than to bite other people and infect them.

Story-wise, it is hysterical, and horror-wise, it excels perfectly. There is a cat gag that takes place towards the end of the episode, another play on a horror trope, and it lands so perfectly. Dean Pelton provides the music for the party, which is nothing but ABBA and his personal voice memos. The funniest memo he has is to “check out Human Centip-.” There is a ‘zombie’ attack set to “Dancing Queen,” which is just peak comedy. Also Troy tries to take out the ‘zombies’ in his DIY Ripley Power Loader suit that is made out of Styrofoam and PVC pipes. Needless to say, the suit doesn’t last long. Oh, and the episode is narrated by George Takei, with a special gift for people named Kevin. 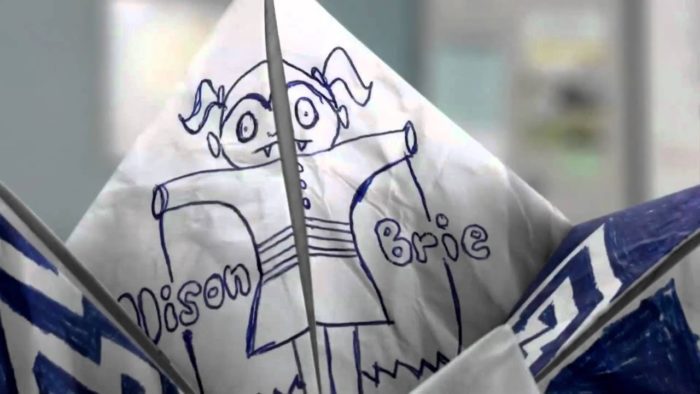 Community is hands down one of the funniest sitcoms on TV and it was full of heart, great writing, and perfect comedy moments. Thankfully, Dan Harmon graced us with a few spooky episodes that stood out from the plethora of sitcom holiday episodes. Be it Christmas, Halloween, or Thanksgiving, Community knew how to make their holiday episodes fun, thematic, and meta.

Looking for more horror episodes of non-horror shows? We’ve got you covered:

“How Boy Meets World Made a Better Slasher Than Most”