You may be starting to hear director Craig David Wallace’s name a lot more often. The director’s slate has been filling up steadily over the past few years with credits in television that include Slasher, Hulu’s Freakish, Murdoch Mysteries, and Nickelodeon’s puppet-filled The Barbarian and the Troll. Wallace’s latest effort, the feature film Motherly, which he co-wrote alongside Ian Malone, has found its way into Arrow Video’s FrightFest this weekend and should be on every attendee’s list of must-see films.

Motherly starts drearily on a farmhouse where mother Kate (Lola Burke) and daughter Beth (Tessa Kozma) reside. Kate has tried to coax some birthday cheer into her daughter, but Beth doesn’t seem to appreciate her mother’s efforts. Perhaps it’s that Kate comes on a little smothery. Or maybe it’s because it’s the first birthday she’s had in this new location without her father. Regardless, it’s quickly obvious that Kate and Beth are not getting along. The appearance of presumed beau Hal (Colin Paradine) isn’t making things any easier for Beth to stomach either. 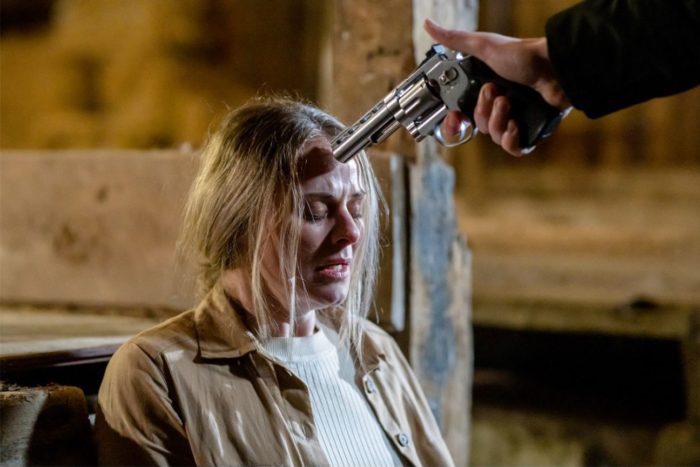 As the exposition unfolds, the audience is shown a series of events involving the death of a young girl at Kate and Beth’s old residence. It’s learned that Brad, Kate’s husband and Beth’s father, has gone to prison for murdering the child and that the two are in witness relocation for his crime. Kate is trying desperately to sell a book in order to provide for the remaining two-thirds family but is overwhelmed by something she’s trying to avoid discussing in her book. While Brad’s incarceration explains the animosity the two have for each other, there’s clearly more going on than the audience is privy to. Realistically, it’s not that hard to guess where that story is going or why it’s headed there.

During all of this, a wonderfully cinematic moment for Motherly occurs when Kate spills a drink. When she goes to clean it up, she remembers her culpability in cleaning the young girl’s blood from the floor in the old house. It’s momentary, deeply psychological, and profoundly affecting.

From this moment onward, however, it feels like Motherly has tipped its hand. We understand the setup, we have a good idea about what’s coming, and we’re just hoping the film is entertaining. Luckily, we get exactly that with the introduction of kidnappers Mary (Kristen MacCulloch) and Lewis (Nick Smyth) coming for vigilante justice because they don’t believe Brad was the one who killed their little girl. Add in Hal getting a call from Beth for help, leading to a The Shining/Scatman Crothers setup for the character, and you can see that this movie jumps into a very playful territory that plays on classic horror clichés to grant a good time. 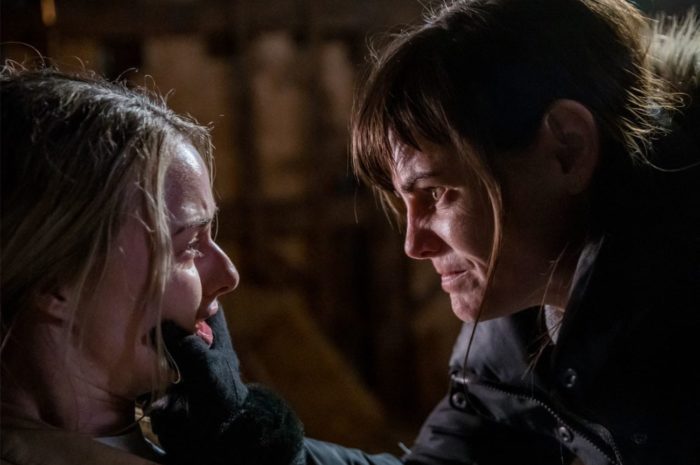 Motherly doesn’t come on too strong in telling its tale. It’s filled with an idyllic atmosphere for dread and can easily facilitate its grief-ridden characters, but it never finds them tapping into the utter brutality that would likely come with a decision like the one Mary and Lewis have made. I think there’s this horror in all of us, and in the case of losing a child, especially under the circumstances that these characters have, you have the choice to let go or give into it. In horror, we usually find the latter option leading those characters to find the capacity for violence past anything anyone has seen before. In contrast, Motherly opts for a more timid atmosphere, akin to those ’80s horror movies that are more roller coaster than foreboding atmospheric drama. Still, I’d be interested in what the alternative could have been.

Honestly, I did feel as though Motherly was a bit on the predictable side, but that isn’t to say it’s all bad. The film promotes homages from older genre films like Friday the 13th: Part III, The Shining, and Texas Chain Saw Massacre to sprinkling in vibes from the 2020 thriller Run. Motherly may not have been the most unique film I’ve seen at the festival, but that isn’t the point. Though it isn’t a shock a minute, it’s still fantastically executed with great camerawork and well-prepared style. Plus, the score incorporating Friday the 13th style sounds and noises was a memorable choice. After all, Mrs. Voorhies would have done anything for her child, also.

The thing that really stood out to me at the end of the film—and this is the highest compliment I can give a film—is this: I thought about how great this experience would have been in a theater. Sometimes the fun of seeing a horror film isn’t its unpredictability or originality but having the camaraderie of a group enjoying the film for what it is. Motherly is formulaic, but it’s also well-told and a lot of fun. I’m genuinely envious of anyone heading to an in-person screening of Motherly at FrightFest or any future movie festivals where Motherly is showing because they’re in for a treat they can share with those around them.

Motherly premieres August 26 at FrightFest with a virtual showing on September 1.