Sometimes Mother doesn’t always know best. A demented Hitchcockian thriller, Run exceeds the expectations set previously by director Aneesh Chaganty’s debut film Searching (2018). It also introduces us to newcomer actress Kiera Allen, who brilliantly portrays the longing and determination of a teenager struggling to find their independence after a childhood in a wheelchair. Alongside her is the fantastic Sarah Paulson (American Horror Story), who plays the chilling mother who has been wrongly medicating her daughter to keep her under her care—a character who will be sure to have horror fans talking for years. Debuting as the opener for the Nightstream film festival, this film demands your attention as it delivers one bone-chilling scare after another. 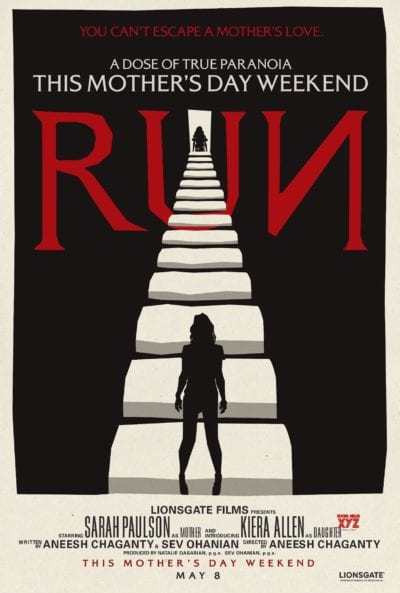 Inspired by the famous Gypsy Rose Blanchard case, this nightmarish take on Münchausen syndrome by proxy is not short on thrills. However, it is a little light on the finer details that get lost along the way—like wearing a hat on a rollercoaster. You hardly have time to catch your breath, let alone go over the story with a fine-tooth comb. Don’t get me wrong, that isn’t exactly a knock on the film. This thing just moves at a speed that would make a roadrunner jealous. That being said, it’s hard to care about nit-picking when what you’re watching is THIS bonkers.

What began to intrigue me most was the mental chess game between the mom and daughter. Every time Chloe thinks she is one step closer to unraveling the horrible truth, Paulson’s Diane Sherman is already one step ahead of her. Diane doesn’t want her daughter to leave for college and no longer need her Mother, leaving her alone in that house with whatever pain and trauma reside in someone to make them do this to their own child. In her mind, she is doing the right thing and protecting her child. Any mother on Earth would move mountains for their children. What depraved levels would she sink to?

On the surface, Diane has condemned Chloe to life in a wheelchair. On the other hand, she also raised her to become highly resourceful, even giving her an above-average grade school education since Diane is a teacher. I don’t think she ever planned on Chloe being that determined and intelligent. Where she sees a weak and sick girl, there is actually a strong young woman striving to reclaim her identity and individualism. Ironically, her mother is responsible for both of those by giving her daughter the worst and best parts of herself.

Both leading ladies sell the absolute hell out of this story. Their shared pain is gut-wrenching; every twist and turn this story takes feels more devastating than the last. Combined with some mind-bending camera work and clever editing, well, some scenes are simply meant to be seen in a theater full of excited horror fans. I hope it can get the kind of theatrical release it deserves someday. It’s wildly entertaining and full of genuine scares that will surely make you squirm in your chair. Seriously, this flick made me yell out loud in my own damn house more than once.

I particularly loved it when Chloe wakes up in her own room after finding out she’s been taking dog medicine. She looks over and sees that Diane has left her a plate of breakfast. Yeah, right, like she’s ever going to ingest anything from her mother ever again. A brazen gesture that makes you wonder if Diane is even fully aware of the extent of the damage she has caused. Probably not.

When Chloe realizes that she’s also been locked in her own bedroom, an escape room-like scenario begins. One that pushes her to her physical limit after testing her mentally in the previous act. The tension builds even higher as Chloe must now overcome all of the mountains of illnesses that her mother has given her, such as asthma and heart disease. Obviously, dragging herself across the roof with a mouth full of water so she can safely (and cleverly) break a window of another room is something her mother did not expect. However, this is her daughter here. Mama didn’t raise no fool.

Most of the fun to be had comes from the games being played throughout the film. Each act serves as a different match, culminating with an incredibly tense game of cat and mouse. Notably, Sarah Paulson starts channeling some serious Terminator 2 T-1000 energy here. She becomes an unstoppable force who will stop at nothing to get what she wants. Diane’s own resourcefulness and problem-solving are put on full display, so you can clearly see where Chloe gets hers from.

Rather than spending time on the why, this film mostly deals with how. It gives away most of its secrets within the first 20 minutes. But that doesn’t mean the journey getting there isn’t fun as hell. Anchored by two of the years best performances, Run simply can not be missed. Likewise, Kiera Allen proves she can share the big screen with the likes of Sarah Paulson. Bravo to Chaganty for casting an actual wheelchair-using actress. Every director should take note because I, for one, can not wait to see what is next for her. Horror is an inclusive genre and this kind of representation can not be passed up.

Run drops a blood-chilling idea in your lap and literally runs with it. Paulson’s terrifying portrayal of a mother suffering from PTSD is so forceful. And yet, it’s not even the best performance in the film. I dream of a normal world where we could have experienced this insane film together in a cinema. Luckily, Nightstream was able to deliver the goods this Halloween season and have it available to stream online.

Be sure to watch this cold-blooded film when it starts streaming on Hulu November 20, and check back with us here at Horror Obsessive for more Nightstream film festival coverage!