The Walking Dead kicked off its eleventh and final season with “Acheron Part 1,” an episode that is equally parts dark and disturbing as well as tense. If you’re like me and have thoroughly enjoyed the evolution of the series since Angela Kang took over as showrunner, then you probably enjoyed this episode as much as I did. It’s astounding when you think about how much we’ve seen narratively over the years that the eleventh season premiere can feel fresh and fill you with tension, but that’s exactly what “Acheron Part 1” did. If you haven’t seen The Walking Dead S11E1, stop reading now because we’re about to get into some details and dive deep here.

The episode starts off really suddenly, dropping us straight into a dangerous food run led by Maggie. It appears to be a former military center of sorts, and our characters are coming in through the roof to enter, grab food, and hopefully return to safety. Well, we all knew it wasn’t going to be that easy. The opening sequence is eerily quiet, subtly setting a tone that this group is in a bad way. They’re hungry, they’re desperate, and they’re void of all of the progress we’ve seen them make in previous seasons in terms of building a new society. Wars with The Saviors, The Whisperers, and others have taken their toll on our characters, and Rick’s dreams of a new society seem all too distant. We’re back to square one in a sense, fighting for food, scavenging and living moment to moment instead of building for generations to come.

Those feelings carry us through the episode, which is split up by two main story arcs. We have Maggie, Negan, Daryl, Carol and others agreeing to go on what was dubbed a “suicide mission” to a place Maggie used to live to get supplies, in a last ditch effort to keep the people of Alexandria afloat until they could start rebuilding. All of the scenes with these characters, once they get on the road, are dark, mostly greyish, cold, and filled with tension. There was a palpable feeling of despair and desperation with these characters every time we saw them. The other major story arc featured Ezekiel, Eugene, Princess and Yumiko, trapped at the Commonwealth, undergoing what was called “processing,” all while learning that this place may not be some place they want to stay.

To stay with the action at the Commonwealth, our characters were interrogated for over seven hours, being asked the same questions over and over in an endless loop. First impressions here are that the Commonwealth wants to break new arrivals down and have them forget what they know to become fully immersed in whatever this way of life looks like. That thought is challenged later in the episode though with a collage of pictures, appearing to be from people’s pasts. The wall said that the photos were of people who were to have expedited processes getting into the Commonwealth. This wall of photos is where we learn that Yumiko’s brother is here, which stops our characters from making their attempted escape now that Yumiko has a reason to stay. 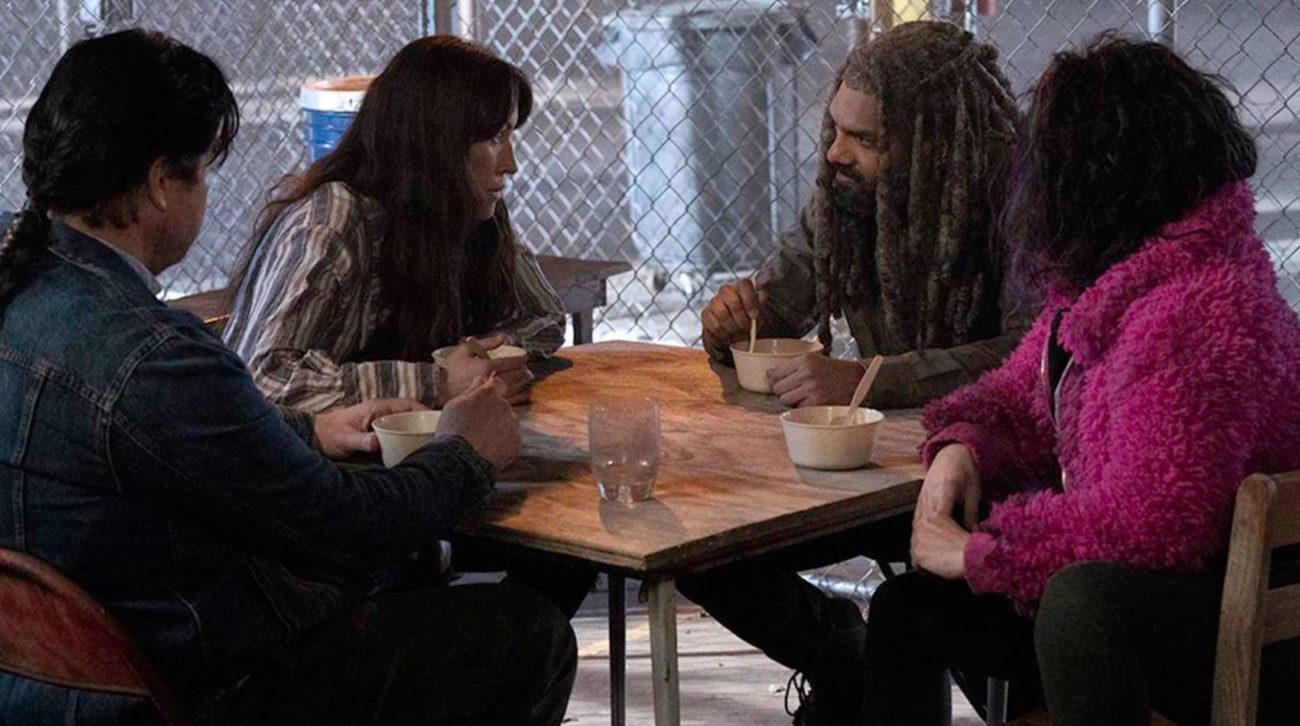 Introducing a place like the Commonwealth in the final season signals to one of two things: this is either going to be the source of conflict for our end run, or this place can be a final destination of sorts for our characters. The Commonwealth is heavily guarded, with the guards dressed like Storm Troopers and giving off military vibes. One has to wonder what this place’s relationship with the CRM might be. Are they feuding factions competing for dominance, or are they under the same umbrella? The mythology of The Walking Dead universe is one of many things that has become much more interesting over the last few years.

Right now, it’s too soon to say if the Commonwealth is on the friend or foe column, although they certainly started off very foe-ish. One thing “Acheron Part 1” doubled down on was Ezekiel’s cancer. The man is ill, and one has to wonder if they did decide to escape at some point, would the former King be physically up for it? Between showing how sick he is and Yumiko now having a reason to want to stay, plus Eugene’s longing to finally meet this mysterious Stephanie he’s been communicating with, there are reasons for our gang to want to stay.

Shifting focus back to Maggie’s group, the mission they go on leads them through a subway where they encounter bodies wrapped in plastic, obviously now walkers. At one point, Maggie mentions that whatever was done to them happened before “the fall,” which was a truly chilling thing to think about. There were hundreds of bodies, each wrapped in plastic. Could the villains known as the Reapers, who are being built up as the new “big bad” of the show, have done this before the fall of civilization? Or was this more manipulation from Maggie, which we have seen more and more? Perhaps the Reapers wrapped these corpses more recently for some kind of diabolical means. Either way, the imagery was beyond creepy.

The tension between Negan and Maggie was on full display for the duration of the episode. Negan calls out Maggie at one point, saying her plan was to use him on this mission and then to kill him far away from home, a possibility that only Negan and Maggie had thought about, apparently. Negan questions Maggie’s leadership and, at the time, brings up good points. Maggie is cold, tense, and angry, and the show’s vibe is a reflection of her in many ways. She wants Negan dead and is perhaps blinded by that desire for vengeance. Negan, despite all of his flaws, is a natural leader of sorts, and while he’ll never be trusted, he does have a lot to offer the group. Of course, that is all ruined by the show’s final moments, as Maggie is attempting to climb to safety from walkers and calls out for Negan’s hand. He thinks it over and leaves her in peril as the credits roll.

“Acheron Part 1” set the tone for a final season that will of course be adventurous but also looks to deal with the pain and wreckage from previous seasons. These characters and the world they live in have paid a toll for the battles fought and lives lost. Their scars are on full display. Rick Grimes dreamed of our characters building a new world, and they’ve come so close so many times. Can they rebuild Alexandria? Is the Commonwealth a better ultimate destination? Is a new society even possible? “Acheron Part 1” gives us more questions than answers as a good season premiere should, and we’ve got a lot to look forward to here.