On Tuesday, August 3rd, I was invited by AMC to join a small panel of journalists to join The Walking Dead cast members Khary Peyton (King Ezekiel), Eleanor Matsuura (Yumiko), Josh McDermitt (Eugene), and Callan McAuliffe (Alden) for a Zoom meeting, where each journalist was permitted to ask one question of the cast. Each journalist in attendance had also been given early viewing access to the first two episodes of the upcoming eleventh and final season of the show, although there will be no spoilers discussed here. (Be on the lookout for Horror Obsessive’s weekly analysis for each episode though!) Below are some of the highlights from the panel discussion:

Khary Peyton was asked if we can expect any flashbacks from Ezekiel’s past as a zookeeper. Peyton responded, saying to expect the unexpected. They’ve been filming for a few months now and it’s been exciting, but it would be wrong to tease anything.

The next question was asking how many episodes still have yet to film. Khary Peyton answered, saying “It’s far from over. We’re nearing the midway point but we’ll be shooting well into next year. I feel like there’s a lot of story yet to unfold and to be told and maybe to even be decided upon in some ways.”

The follow-up question asked if the actors learned ahead of time when their characters were to be killed off. Khary Peyton responded saying, “You’d like to think that you would. It’s funny to be on a show like this one—a hit show. You want to pop the champagne and celebrate but it’s one of those shows where you’re just waiting for that call to tell you that your dreams and aspirations are about to be crushed. The limo that brought you here isn’t taking you back. This show can be a cruel mistress. It gives a lot but it can take it away quickly.”

Callan McAuliffe responded first, saying he wanted his character to have such an unremarkable death that it would be remarkable, which got laughs from everyone. “Trip in a puddle, hit his head on a counter, and never be mentioned again.”

Josh McDermitt answered that he wanted Eugene to die of old age. “I feel like he deserves it. Everyone, myself included, expected him to be gone after two episodes. There’s no way this guy’s living. But he’s figuring out a way. He’s been a little cockroach about it but I do hope he dies of old age. If they do decide that it’s time to go, I hope they do him justice and give him a hero’s death because I do think he deserves that. He’s certainly been the hero many times before, so if it came to that, it’s not out of the realm of possibility for him to have a hero’s death.”

Khary Peyton was next up and said he hoped for “dreadlocks flying off a cliff, slow motion in the wind kind of death. A full orchestral score.”

Eleanor Matsuura said that if her character had to go, she wanted it to be memorable but she was like Josh. She wants Yumiko to have a long, happy life and mentioned that we will be learning more about the character soon. We recently learned that the character had this extraordinary education and called it the life her parents wish she had.

The next question was for Khary, asking if the character still has a chance for peace and serenity, after learning that he has cancer last season. Khary responds by saying he hopes so and that he wants Ezekiel to find that inner light that others see in him. He wants him to be ok, to be a leader, but his messy life and all of his losses in his life are what draw people to him. He also mentions how much it’s meant to him to see how much Ezekiel’s journey has impacted people going through personal struggles. 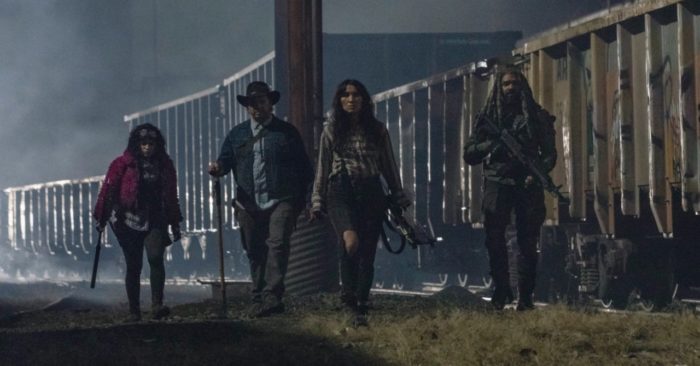 The next question was for Callen, asking about Alden’s skills as a builder. Callen says there were conversations with the showrunners on The Walking Dead before about how Alden spend the early part of the apocalypse with his brother and had to learn how to make things. Follow up question was about Maggie growing cold towards others. Callen responded that Alden has noticed a difference in her and he does find that disturbing.

The final question was for Callen, asking if there was a war between Maggie and Negan, which side would he be on? Callen said that while Alden had done what he had to do, there shouldn’t be any question about what side he’s on.

Many thanks to AMC and these cast members from The Walking Dead for taking the time to speak with myself and the other journalists on the panel. The Walking Dead returns for its final season Sunday, August 22nd on AMC and is available to stream early on AMC+, starting August 15th.