The first half of the episode was very action-heavy, which was to be expected given the situation our characters were left in last week. The Walking Dead series finale really gave us some of the best zombie sequences in the entire series and the threat felt more real than ever. Zombies were inside the walls of the Commonwealth, Judith was bleeding badly from a gunshot wound, and panic was setting in.

In the opening moments of the episode, Jules and Luke were killed by zombies, effectively proving that they were in fact brought back last week to be part of the final death count. It provided a great fake out though, in the sense that our characters grieved Luke’s passing hard, bringing down the audience’s defenses in regard to another death to come. 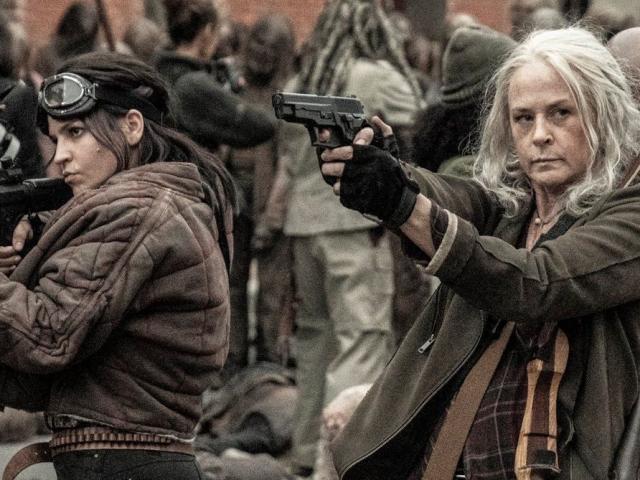 It was a masterful touch really, treating Luke’s death as such a big deal. It made you feel like we had got the tears out of our system and that we wouldn’t possibly have to endure another passing. Which made Rosita that much more surprising and heartbreaking.

In one of many fast-paced, high-intensity action sequences in The Walking Dead series finale, Father Gabriel, Eugene, and Rosita need to scale the side of a building to flee from a relentless herd of zombies. While the men climbed to safety, Rosita didn’t. She fell into the herd, only to quickly pop up and use her sword to fight her way to safety.

The sequence didn’t really work and felt incredibly forced. There’s no way she should have survived that fall into that many zombies. It came across as lame to be blunt, but a few scenes later when Rosita showed Eugene the bite she received from that fall, all hard feelings about that scene went out the window. Rosita would be the major death in The Walking Dead series finale, the one that would bring our characters to tears and some audience members too. Rosita was a beloved character and saying goodbye to her daughter, after living long enough to see our characters overtake the Commonwealth and find some peace was easily one of the series’ most powerful moments.

The Walking Dead series finale took care of business early in the episode: Mercer got free, Judith was saved, Coco was found and everyone reunited so the big battle could ensue. Mercer lead our characters into a confrontation with Pamela, where her own troops eventually turned on her and she was arrested. Negan acknowledging that for someone like her, being arrested is worse than death was a nice touch.

The ongoing social commentary of the final season got to have its climax, with Daryl calling out Pamela Milton for trying to recreate the old world, with its class warfare still intact. He also got to say that we all only have one enemy, the walking dead, which was a line I could have done without. A little too cute for such a drastic and powerful scene.

The Walking Dead series finale did go all out with the soundtrack, including a most excellent use of “Cult of Personality” to gather the zombies to a fountain, which was rigged with explosives and completely destroyed a large part of the Commonwealth in what was a very impressive spectacle. “Landslide” played as our heroes celebrated their much-deserved peace, good food, and wine after the zombies were destroyed and everyone could breathe a little easier. Rosita taking it all in moments before her death was a great touch, making it all that much more bittersweet.

We jumped one year in the future, and as I predicted a few weeks ago, Ezekiel had taken over as the Governor of the Commonwealth, with Mercer as his Lieutenant Governor. That really lent itself to a happily ever after ending, with the former King again taking a position of power, a power that he will use for good and take care of everyone without abusing it or creating a ruling class. Sounds like an ideal future that we all should want to strive for.

Our characters appear to be split up between Alexandria and the Commonwealth and everyone seems to be thriving. Daryl alludes to Carol having Hornsby’s old job which was another nice touch. While I was hoping for a reason for Daryl to wind up in Paris to be given here in The Walking Dead series finale, I suppose we’ll have to settle for a very tender goodbye between Daryl, the kids, Ezekiel and Carol. Daryl telling Carol that he wishes she was coming with him before he rode off into the sunset was a nice blurring of reality, as Carol was originally supposed to be in the spin-off series with Daryl. But Daryl is a loner at heart and as he got on his bike to ride off, the imagination started kicking off ideas on how he could wind up all the way across the sea.

The Walking Dead series finale featured a few significant conversations. First, was Judith, while slipping in and out of consciousness, telling Daryl that Michonne was out looking for Rick. This was the first time Daryl (or anyone else) heard about this, so it was a major reveal. While the expectation is that the Rick and Michonne spin-off will reunite them with their children, will Daryl be back from Paris in time to see his old friend Rick again?

The other really noteworthy conversation was between Maggie and Negan. Negan earlier in the episode told Maggie that he finally understood how she felt after his wife Annie was sitting execution-style in the previous episode. Later, Maggie found Negan sitting alone and sat with him, explaining exactly why she couldn’t forgive him, but also explaining how she’s trying to not hate him anymore. It was an honest moment of almost closure for the two, bringing a five-year story to a head. While it made for a great moment in The Walking Dead series finale, what it didn’t do was set up their spin-off at all. Negan’s wife is still pregnant and Maggie’s son is with her. There’s no indication why they would leave for NYC, especially together.

One of the biggest questions viewers had prior to the finale was if we would see Rick or Michonne at all. The closing moments showed Michonne, still searching for Rick and Rick, still a captive of the CRM. They both were writing letters to their children and the careful editing kept us in suspense as if Michonne was going to ride up on Rick as he was being chased by a CRM helicopter, while barefoot and in a CRM jacket. These moments with Rick and Michonne told very little in terms of what was to come (although Michonne seemed to be riding up on a lot of zombies and Rick does appear to be in Philadelphia) but they did feel oh so good to see. It also seemed to appear that they’d been writing in the same notebook, with the same belongings, one leaving them for the other to find. They’ve both been sorely missed these last few years and out of all the spin-offs to come, theirs is certainly the one with the most potential for mythological reveals, as well as a strong character-driven story and action.

The Walking Dead series finale was really well done. It was a tough task knowing that many of these characters will live on in new shows to come but it really did feel like a final chapter in an 11-year saga. The finale gave us a little bit of everything and felt true to the characters who we have been on this journey, all while making us excited for what’s to come.