Some of the best genre movies of 2021 have been slow burns that make you wait until the very end to get the big horror payoff. The two most notable examples are Saint Maud and Censor, and now I’m happy to say that we can add another film to that list: Night Drive. Directed by Brad Baruh and Meghan Leon, this movie stars AJ Bowen and Sophie Dalah as Russell and Charlotte, an unlikely duo that engages in some wild antics through the course of a single fateful night.

Russell is a rideshare driver, and at the beginning of the film, he picks up Charlotte as his next customer. They start talking, and they immediately hit it off. At first, their playful, almost flirty banter veers dangerously close to cringe romantic comedy territory, but Night Drive soon takes some very interesting turns that will leave you wondering just what kind of movie you’re watching.

In particular, there are two events that really drive the plot forward. First, Charlotte asks Russell to make a brief stop along the way to her destination. He takes her to a seemingly normal suburban house, and almost immediately after she steps inside, she runs back out with a weird suitcase in hand. Initially, Night Drive doesn’t make too big a fuss about this suitcase, but you can tell it’s going to become really important later on. You don’t know what’s in it just yet, but when you eventually find out, it’ll change everything you thought you knew about the film.

Secondly, a little while later, Russell accidentally hits someone with his car, and Charlotte’s reaction to the situation is very strange. Russell is super distraught and wants to take the guy to a hospital, but Charlotte is surprisingly nonchalant about it. She remains cheerful and borderline flirty the entire time, and she doesn’t seem to think it’s a big deal. It makes you wonder just what kind of person she really is, and this uncertainty hangs over the rest of the story like a dark cloud waiting to burst. 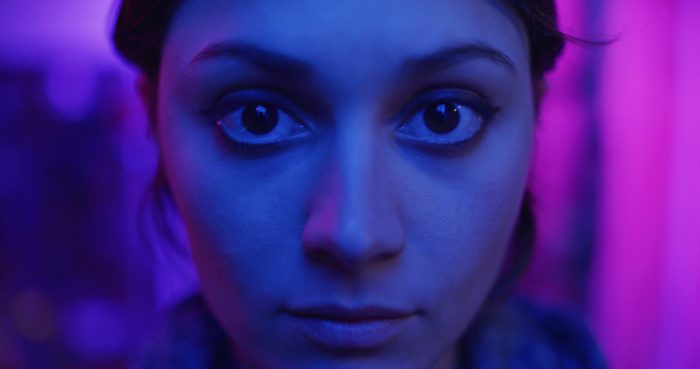 These two mysteries are the backbone of the entire narrative, so you can easily divide Night Drive into two distinct parts: before and after the movie tells you what’s really going on. The first part is predictably longer, but it’s not nearly as good. A lot of movies set up really intriguing mysteries and then struggle once they reveal their secrets, but this one is the exact opposite. The payoff is the real star of the show, and the setup is merely good enough.

See, for most of the film’s runtime, it keeps its central mysteries a bit too far below the surface. They only emerge every once in a while, and those are hands down the best parts of this first section of Night Drive. They make you furrow your brow and stroke your chin as you wonder what Charlotte’s deal could possibly be, so your attention remains firmly fixed on the screen in front of you.

But unfortunately, those moments don’t come quite as often as they should. This first part is more about Russell and Charlotte’s burgeoning relationship and their playful banter than it is about the mystery and the horror, so at times it feels like a bit of a chore to get through.

Don’t get me wrong. These two actors have really great chemistry together, so they keep the film afloat through its first two acts. The problem is just that too many scenes ignore the best parts of the story, so you begin to get a bit impatient with them. You want to know more about who Charlotte really is and what’s in her mysterious suitcase, but instead, the movie just throws a few too many character moments at you. 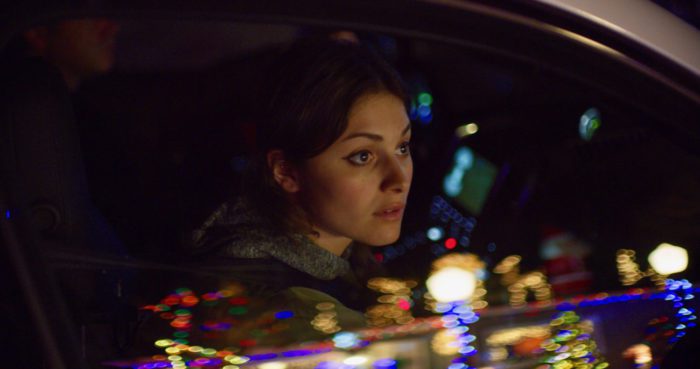 That being said, Night Drive doesn’t go too far in this direction. You never get so fed up with it that you don’t want to watch it anymore, so you’re never in danger of missing the payoff. And what a great payoff it is. Once the movie pulls back the curtain and answers all your questions, it gets really good.

I can’t say anything specific about this second part, so I’m going to be really vague here. Like I said before, a lot of films set up great questions and then give you disappointing answers, but not this one. I was totally satisfied by the movie’s explanations of its two central mysteries. The contents of the suitcase are super intriguing, and once you know what’s in there, Charlotte’s odd, almost psychopathic behavior makes perfect sense.

On top of that, what these characters do in the third act is also really interesting, and the narrative even raises some poignant questions that will challenge you and force you to admit that you’re probably not quite as virtuous as you’d like to think. In a nutshell, it’s an awesome ending that packs a strong emotional punch and sends you off on a high note.

So overall, if you get a chance to watch Night Drive, you should definitely check it out. While it’s a bit slow and sometimes even a bit tedious in the first part, the payoff is more than worth it. It’s one of the best endings I’ve seen all year, so I highly recommend giving it a shot.

Night Drive will play at FrightFest later this month, but you’ll also get a chance to see it before that. It hits VOD on August 6, so whichever way you choose, just do yourself a favor and watch this movie.