Generational trauma and personal trauma may be two different things, but there’s a lot shared between them. People tend to want to forget about their painful pasts, whether as an individual or as a community, and often the only way to resolve either is to confront those painful pasts and the things that have been haunting them head-on. Everything that these two forms of trauma have in common winds up driving Panic Fest 2021 selection She Watches from the Woods, a story that walks the line between supernatural curses, past atrocities, and mental health—and though it may not hit every single target it aims for, I think it balances its many themes and connections really well.

Directed by first-time feature creator Beau Ballinger, She Watches (for short) is the story of June, a woman with a struggling art career and a loving girlfriend who’s spent most of the past several years in a mental institution. As a child, she saw her sister Willow pulled into the lake by their home and drowned, and ever since, she’s heard mysterious voices. Her doctors have chalked it all up to a coping mechanism for dealing with the death of her sister, but when she travels to visit her dying, ungrateful mother, June takes the opportunity to dig for the truth. What she discovers turns everything she thought she knew about her hometown on its head as she realizes there’s something more to it all than just post-traumatic stress.

I love the atmosphere this movie has going for it. The shots within are long, sweeping views that would be calm if there wasn’t something sinister lurking beneath them, mixed with long takes following June through corridors and rooms as she tries to clear her name. The production design manages to feel low-key and fantastical at the same time, hinting at the supernatural nature of the events within: the hunter’s house full of photographs and mounted animal heads, the docks by the lake covered in fairy lights. The colors we see in both day and night scenes are muted yet pop out in all the right places. She Watches is a slow glide into the dark parts of personal and communal history, and it visually represents this in interesting and effective ways. 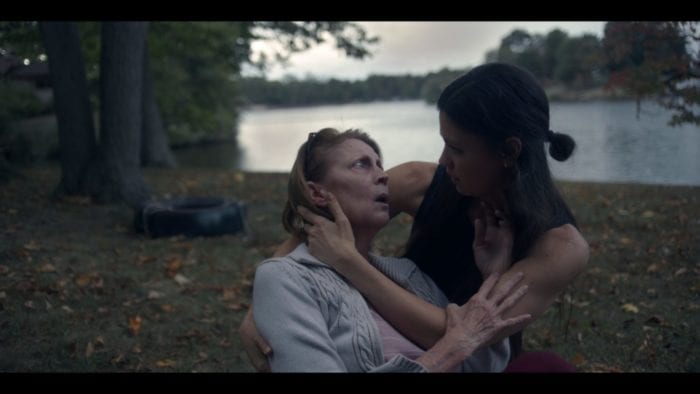 Without a solid cast and narrative, though, this story would fall apart, and thankfully it has everything it needs to succeed. Meredith Garretson is the perfect protagonist to hold She Watches together, balancing the humanity of a woman tortured by her past and the curiosity of someone connected to a mystery that demands solving. Everyone around her, from her loving partner to her not-so-loving mother, influences her in different ways, and their every interaction feels like something that could have actually happened. The townsfolk June speaks to about the mysterious drownings that have plagued the town much longer than she ever expected feel like real people, as well, and manage to quietly hint at the history behind it all—save for the old gun-obsessed woman who June speaks to. This is the one scene that feels a bit off as the subtext becomes text far too fast, but it thankfully doesn’t detract from the ultimate message.

Without going too deep into spoilers, She Watches takes its underlying theme of buried past trauma and the ways it stays with those affected by it and handles it with care. The supernatural events taking place have to do with atrocities committed against the Indigenous people of the land the town was built on, linking June’s past with it along the way. The smartest thing this film does is not equating the horrors of the past with what June has gone through but placing them side by side as something that allows June to relate to and connect with the force that killed her sister. Though several of the other people in her life, especially her mother, think she’s performing a fool’s errand in researching and uncovering these truths, June manages to finally come face to face with what’s been haunting her for all these years and confront it with compassion. 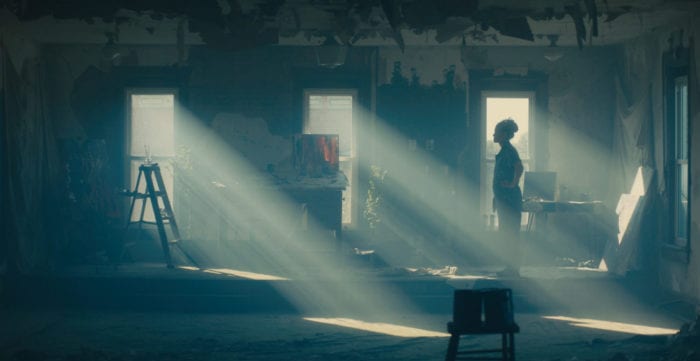 The way this film ends is…strange. It takes a sharp turn from the slow atmosphere of the rest of the film, throwing us a viscerally violent epilogue that feels a little out of step with what we’re used to from everything we’ve seen so far. Having thought about it for a while, I think it makes sense and feels earned through everything else we’ve seen in this story, but others might find it somewhat off-putting. There will certainly be a large group of viewers who find this a cathartic ending, though, after the past horrors we’ve learned through June’s journey; if anything, this is probably something of personal preference, and I personally find it works really well within the frame of the rest of the story. Besides, I find the rest of She Watches a ride worth taking to get there.

I really enjoyed my short time with this movie. Beau Ballinger and Meredith Garretson are a director and actor to watch, respectively, and I look forward to seeing how else they make their own marks on the horror world. They explore trauma of many different kinds in a compelling way through She Watches from the Woods, and the result is a visual and a narrative feast for anyone willing to dive into its depths.