Dreams feature in so many films that they are painfully familiar tropes by now. It’s alright, “it was just a dream”, or “who dreamed it?” Supernatural beings cross over here via dreams or those lovely dreams within dreams. Mike Flanagan gave us the young boy whose dreams manifested while he slept, and the title of Come True had me expecting that here too. But no: there may be brief moments of a trope or two (I shan’t tell you which), though, for the most part, this is its own story.

Come True follows teenager Sarah (Julia Sarah Stone) who has had enough of couch-and-playground hopping after a tough domestic situation and responds to an advert for a sleep study. A secure bed every night for two months, and some pocket money: she’d be daft not to. Her sleep was—reasonably—unsettled before this, but after the first night at the lab, both her sleeping and waking hours become weirder: spectral figures lurk in her mind at night, and she has fits and spells of not knowing whether she’s awake during the day.

This general mental weirdness (excuse my science-speak) is so unexpected and escalates so quickly that Sarah is truly scared—never mind that what she experiences is also scary. Her one night of comfort was not enough, and we get to know her just enough before she goes to the lab, see the strain in her face to really feel how much she needed it. Stone is an endearing younger sibling as far as this viewer is concerned: I wanted to give her a friendly ear when her friend Zoe wasn’t around, and I wanted to shake her and point out that she actually had no idea what the scientists were studying. It seemed that no one really looked out for Sarah, but perhaps I’m buying into the assumption that she needed taking care of because of her youth and her small figure.

We’ve seen not just dreams in films before, but sleep labs too. Quiet Comes the Dawn (aka Rassvet) and the sublime TV show Falling Water—also Canadian—both speculated about dreams as devices to achieve or discover something. In Come True, the scientists’ goal is sketchy in comparison. They privately declare an interest in the “unified fear of a shadow with eyes”, a recurring image from their subjects’ dreams, but it’s never clear why, or indeed what responsibility they feel for their subjects. Come True is different in this respect from the other two titles I mentioned here: the identity and roles of these so-called scientists themselves are quite unknown. Some feel like apprentices or students, and none of them feel quite in control or even that they belong to the real world at times.

I’ll come back to another point about the plot in a bit, but you might have picked up already from the above that the mood of Come True is everything. Director Anthony Scott Burns (who is also responsible for the cinematography, and partly responsible for the writing and the music) at first draws you into Sarah’s life and then gradually into her head, mesmerising the viewer along the way with abstract images, heady music, and a pace that’s actually dreamlike in itself: unhurried, yet not lazy or slow; even when the action moves a little quicker, it still feels the same. So just as I said, the scientists weren’t entirely real—most of the film felt that way too, which is quite an art. Some have likened this mood to that of It Follows, but it wasn’t quite: that film also had a retro feel which didn’t feature here. Come True’s tone definitely worked: I was so drawn into Sarah’s experiences that I expected to see the “shadow with eyes” when I went to sleep, too.

It would be easy to say that the dream sequences themselves made this film: they are full of unsettling images, usually monochrome, either vaguely ghost-like shapes in desolate environs or hypnotic, geometric patterns. I don’t think I’ve ever had these dreams, but while watching, I really felt like I had. These dream sequences cannot be considered out of context, though: the contrast between their greyscales and the purple-tinted viewing room where the scientists observed enhanced the effectiveness, as did the music.

Have I mentioned that I loved the music? The artists responsible are Pilotpriest (Burns’ own musical persona) and Electric Youth, both producing goosebump-synth sounds, the latter with added voice. Some have likened this electronic score to classic John Carpenter, but here again, I disagree: Come True has a contemporary sound, and where Carpenter’s soundtracks enhanced the unease, the sounds here countered it. I could imagine following wherever the music took me without noticing mortal danger ahead. 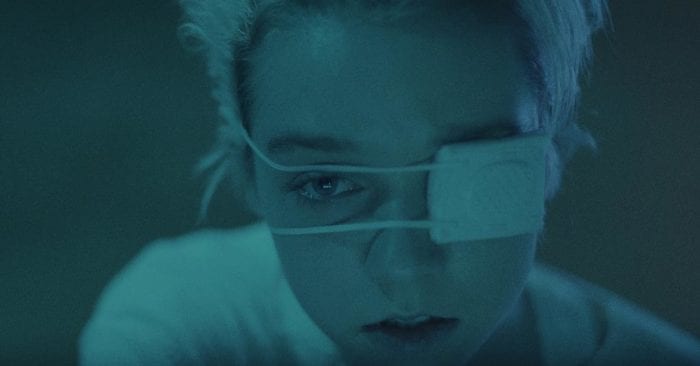 You’re probably wondering a couple of things at this point: what’s the catch? And is it horror? I’ll grab another coffee and then tackle both together.

Science fiction can be said to be “hard” or “soft”, where the “hard” uses authentic science as a jumping point to speculation, and where the “soft” gives little explanation at all. There are degrees of horror too: in general, horror sets out to shock or disturb, but there is no doubt that some horror films are more blunt or extreme in that objective than others. In Come True, the science is more psychology than neurology, as confirmed by the Jungian concepts (such as the Persona and the Anima) in the chapter headings—fairly soft and open to debate, I would suggest. It’s only when the story is considered in that light that the uneasy vein throughout becomes downright horrific. Come True is a sci-fi horror, not one more than the other, but a true, subtly nasty blend.

The catch, unfortunately, is in the film’s conclusion: it felt uncharacteristically rushed, flipping from one conceptual scene to the next. It may be, of course, that this was deliberate, intended to add to the dream experience (they can be unpredictable, after all). There are pieces to put together at the end, but this sudden change in pace could be mistaken for carelessness, and the change in concepts mistaken for a confused plot. For me, that blend of both genres and content styles worked, though I confess not straight away. At first, watching Come True alone in the dark, the ending gave me a jolt and made me sit up straight; but if it hadn’t, I might have had trouble sleeping afterward. Then after I’d slept on it, I was able to consider the whole.

Come True is definitely worth a watch and a listen and a think. You might find it’s not easy to do all three at the same time, though. It is an IFC Midnight release that will be available in theaters and on-demand on March 12.