When a film becomes a hot property, you can bet your bottom dollar that Hollywood executives will milk every cent they can from their cash cow. Horror franchises are especially notorious for creating unnecessary sequels, even if the franchise has run its course. Everything from respected original films like Psycho and Halloween to cheap rip-offs like Friday the 13th and Sleepaway Camp have all felt the wrath of “sequelitis.” Saw IV is no different when it comes to unnecessary, yet this franchise begins its second leg of its ever-convoluted timeline. 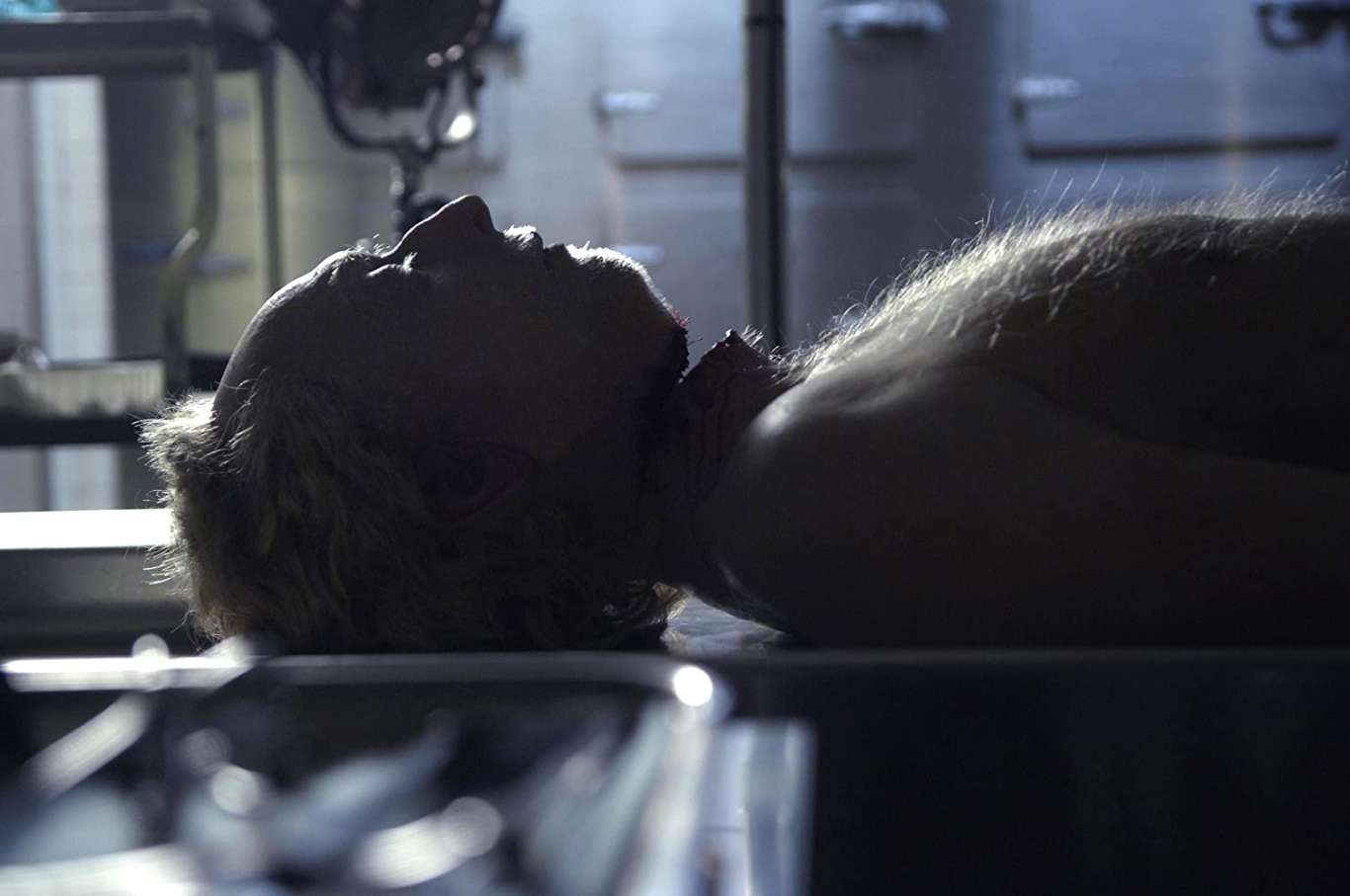 Picking up with the aftermath, the Jigsaw Killer, John Kramer (Tobin Bell), is dead. Unlike other horror franchises, there is no doubt about it, as we open with his lengthy and gruesome autopsy. Returning director Darren Lynn Bousman does not mess around and ensures to the audience that what we will be experiencing will not include Jigsaw, at least in the present timeline. During the autopsy, the coroner discovers a tape, which results in Detective Mark Hoffman (Costas Mandylor) being thrust front and center into the Saw universe. With John Kramer no longer the focal point, supporting characters from past films pressed forth into the spotlight.

Our protagonist on this fourth go-around is Daniel Rigg (Lyriq Bent), a SWAT officer dealing with the loss of one partner, Detective Allison Kerry (Dina Meyer), and the disappearance of Detective Eric Matthews (Donnie Wahlberg). FBI Agents Strahm and Perez (Scott Patterson and Athena Karkanis) take over the investigation while Rigg and Hoffman become pawns in a new game. Rigg has 90 minutes to complete his game, a series of tasks involving unwitting participants. Unbeknownst to Rigg, his willingness, or reluctance, determines the fates of Detective Matthews and Hoffman.

Speaking of Detective Matthews, those of us Saw fans finally get to see the culmination of his story arc. With three films worth of material, you would assume that the Saw franchise has something special in store for this character. Well, like the last film, it’s underwhelming at best. We come to find that after six months of captivity, Detective Matthews is relegated to a side-quest once again. Only to be used as bait, Donnie Wahlberg literally and figuratively stands around for the 90-minute runtime and his conclusion lands with a thud. Not all character arcs are winners, but they should have gone with the original fate that the third film had in store. 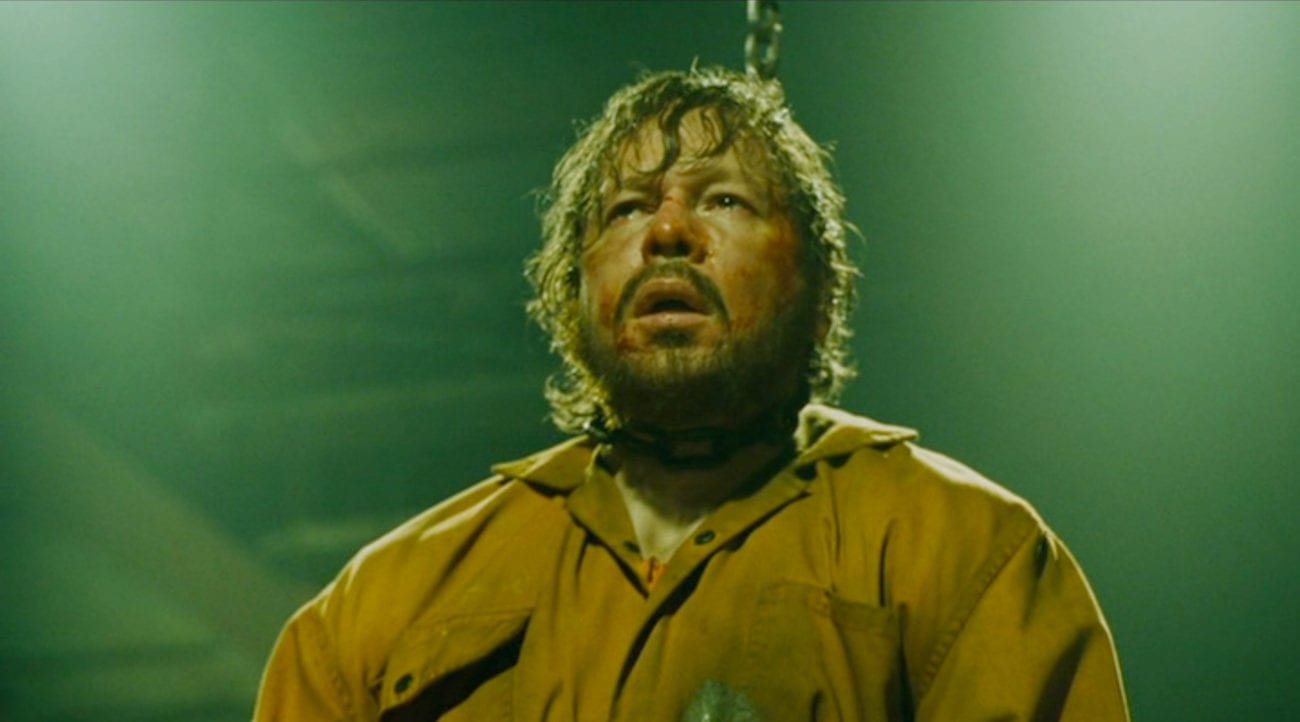 Anyone who has been following my Saw articles should be familiar with the “Three T’s.” These would be time, traps, and Tobin. Since the third film closed out the present-tense John Kramer, you might wonder how much more Tobin can one can garner out of the series, with his character now being a corpse and all. We’ll get to that. First, though, we come to a turning point in the franchise. Not just because John Kramer has gone the way of the do-do, but the timelines now splinter and fracture apart more than ever. Something the following Saw sequels would continue to emulate.

As mentioned earlier, the opening scene picks up shortly after the closing events of Saw III. Writers Patrick Melton and Marcus Dunstan strive to provide motivation for John’s reasonings while planting seeds for future installments. Not just content with cancer and a failed suicide attempt, what the writers set in motion for John in this installment is the loss of his unborn child with his ex-wife Jill Tuck (Betsy Russell).

For me, this is the first film in the Saw franchise that struggles to find a reason to exist. Melton and Dunstan try to add more dimensions to John’s character, though his bones have been picked clean. There is no problem moving the story forward to new characters and not dwelling on the past, but John Kramer’s spirit fills every facet and looms over the story. 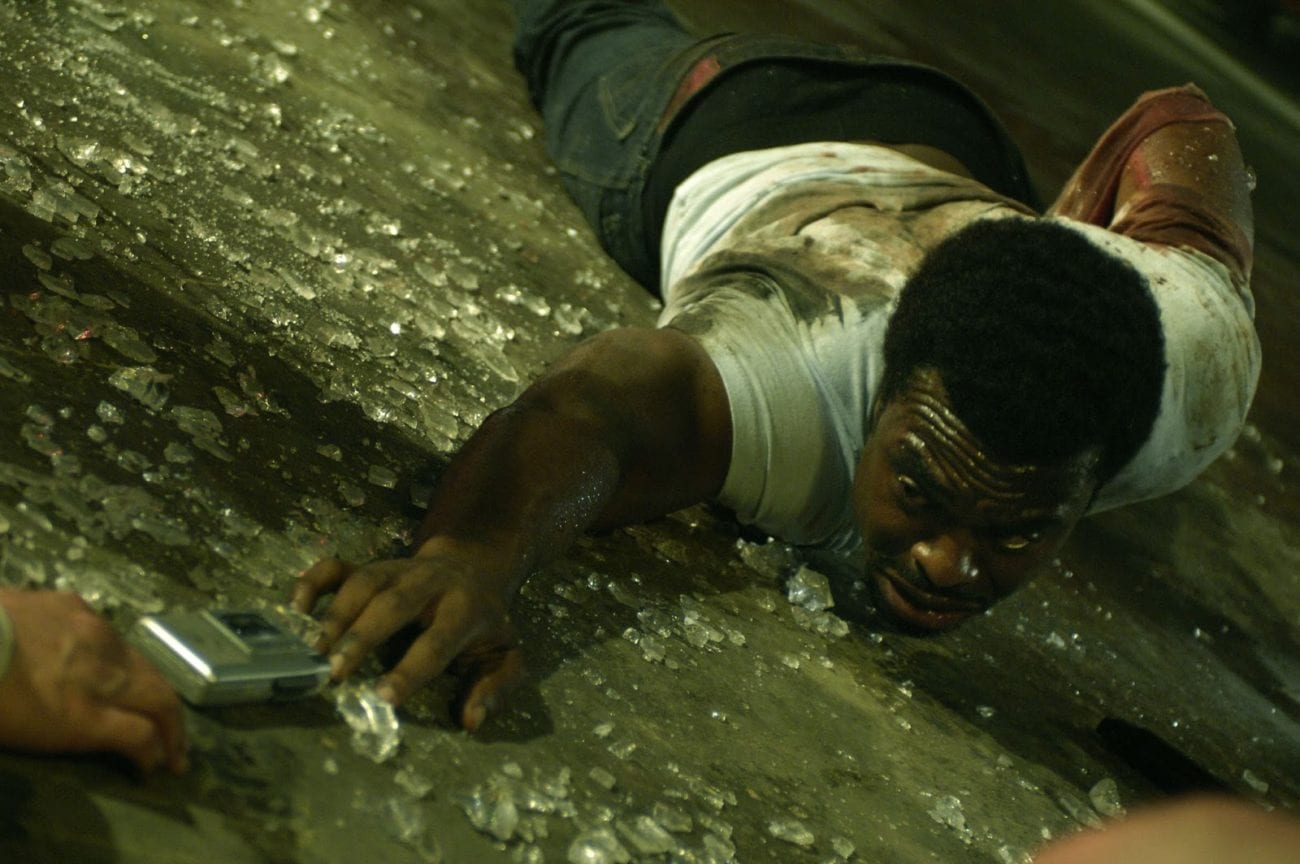 Like a toddler with a mean uncle teaching him to swim, Saw IV spends a lot of its time floundering and struggling to stay afloat. As the writers struggle to maintain a continuity that left the station long ago, you stand and realize you are on the precipice of a decision. As the minutes of the film tick by, you will either go down the rabbit hole with the filmmakers, or you will dust your hands clean of the franchise and walk away. Those are the only two options you, as an audience member, will have during the course of the film’s 92-minute run time.

As I am now writing my fifth article for the Saw franchise, you probably know where I stand.

As you watch this film in particular, you can sense the creative forces are unsure which way to take the series. Sure, they killed off the big bad, but now what? The writers move forth with the prospect that someone has been helping John in the interim. If this sounds familiar, that is because we’ve already gone down this road with Amanda Young. Why do the writers do the same idea again? Well, in the Saw timeline, those hunting Jigsaw are not familiar with her as an accomplice yet. For us viewers, we have experienced this before, which is where the split in franchise enjoyment arises. The writers, director, and editor work hard to cover a lack of direction with smoke and mirrors, yet the faults shine through.

As Jigsaw is no longer a fixture of the present, the narrative structure struggles to gain momentum. Filling in story beats that no one was asking for, the writers continuously shoehorn in moments that a pre-Jigsaw John experienced to drive home his desire for those to “help themselves.” From his ex-wife, Jill, operating a drug rehabilitation center to his unborn child, Dunstan and Melton hit us with an onslaught of tragedy upon tragedy that John has to endure before taking up the mantle.

What tragedy befalls him during the extended flashbacks with Jill? With her being seven months pregnant, a drug addict causes Jill to lose her baby and send John down the path that lead him through these movies up to this point. Well, that and the cancer diagnosis. And the car accident. And whatever he felt lined up with his ideology that day. Look, none of it makes sense. Either you’re on board or not.

As was done in the third entry, this installment puts one person through a handful of traps designed for other people. In what has become an unusual pattern to this point, the main plotline for the first two entries followed more than one victim trapped within a single location. Starting with the previous installment through part four, we follow a single victim who encounters other “participants.” These “participants” feel the brunt of Jigsaw’s wrath while the primary victim deals with the trauma inflicted emotionally. It’s a weird dichotomy thus far for the series that will change with the next installment. What does this have to do with the traps? Not much, really, just musing. 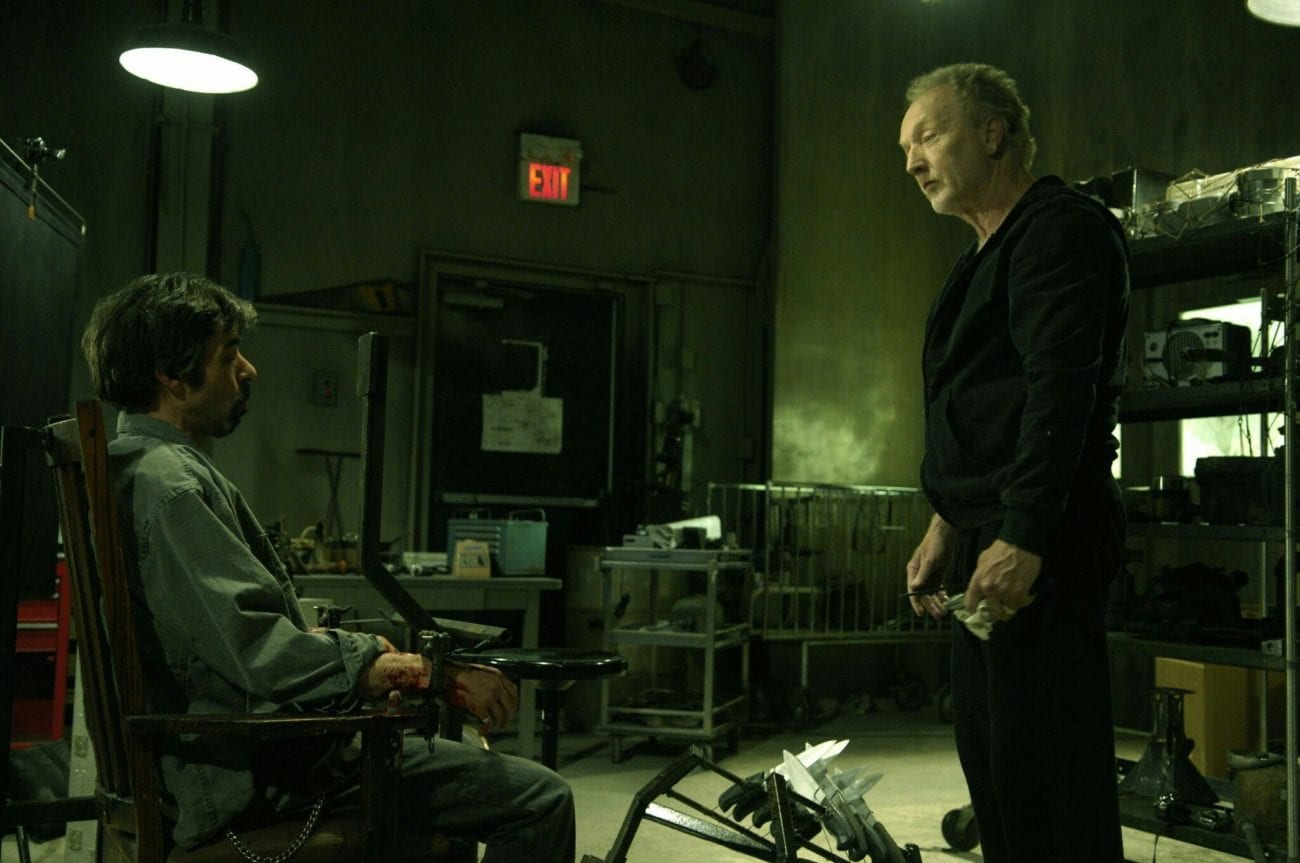 Back on the ranch, as I had mentioned earlier, the feeling of spinning the wheels comes to mind when I think of Saw IV. The traps do provide the requisite gore one would expect, yet the banality begins to wear thin. Gone are the days of teamwork or using more than two brain cells to get yourself out of such an unwanted predicament. What we get in place is a woman in an unescapable trap getting scalped—awesome. A woman who needs to remove spikes that have impaled her and her husband together. When you see the game, it’s not a hard choice, let alone a choice at all. And let’s not forget the door that needs to remain closed for 90 minutes.

As we round the bases on this fourth entry, Tobin Bell continues to be the shining star of this series. Even with Jigsaw no longer part of the present timeline, the writers force ways to make the most out of Tobin Bell. Bell provides a moral center that most villains of the horror film nature struggle to receive. When you look at horror icons that have made it to the fourth film in the series and beyond, there are not many villains that hold your attention like Jigsaw. And when I mean hold your attention, not in the way of “How-will-they-kill-this-teenager”—more of, “This is compelling, why isn’t the rest of the movie this enthralling?”

Even while we sit through another tragedy that has befallen John Kramer, his performance does not get old. This is a testament to the acting ability of Tobin Bell. With a hushed whisper and cold stare, you understand his mindset and what makes him tick. As life beats him down, we feel what he feels, and he is scarier than any game seen in past films or those to follow. 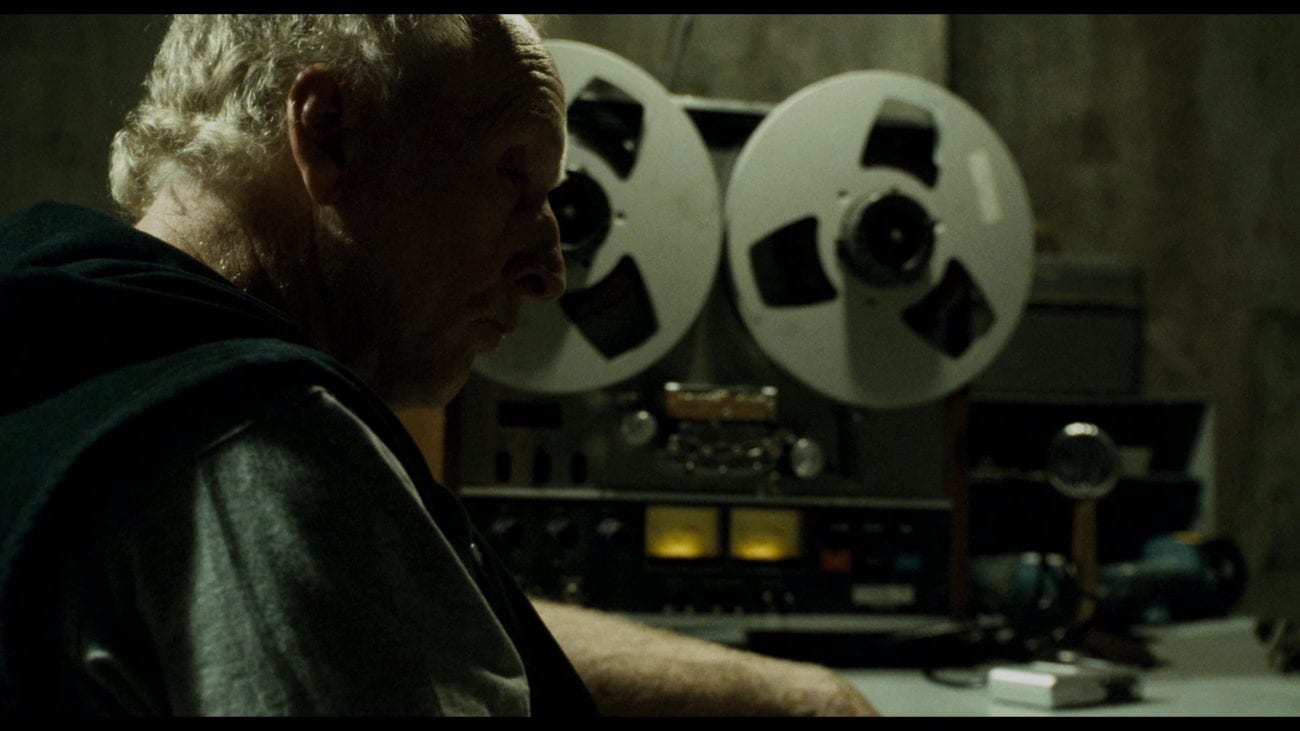 As Saw IV struggles with its identity and getting out from Tobin Bell’s shadow, this film should be the deciding factor if you’re going to go any farther into the world of Jigsaw and his apprentices. And, yes, I said apprentices. If you have yet to see this film, I won’t completely spoil the twist, but—come on: it’s Saw. What would a movie in this franchise be without trying to blow your mind?

One final note I want to touch on before we leave this entry behind us: the point of a twist ending is to surprise the audience with an unexpected revelation. With each subsequent film, the audience becomes more attuned in anticipation of the expected twist. Unless you have something worth blowing the audience’s minds, the fourth entry will probably not have the desired effect. Moreso than anything else, if you’re a fan, you get sucked in as each twist becomes more absurd—Saw IV is no exception. While I do enjoy the convoluted nature and twists, it becomes rote and expected. Which, now that I think of it, kind of sums up Saw IV. Top to bottom, first frame to last, it is what you expect. No more. No less. 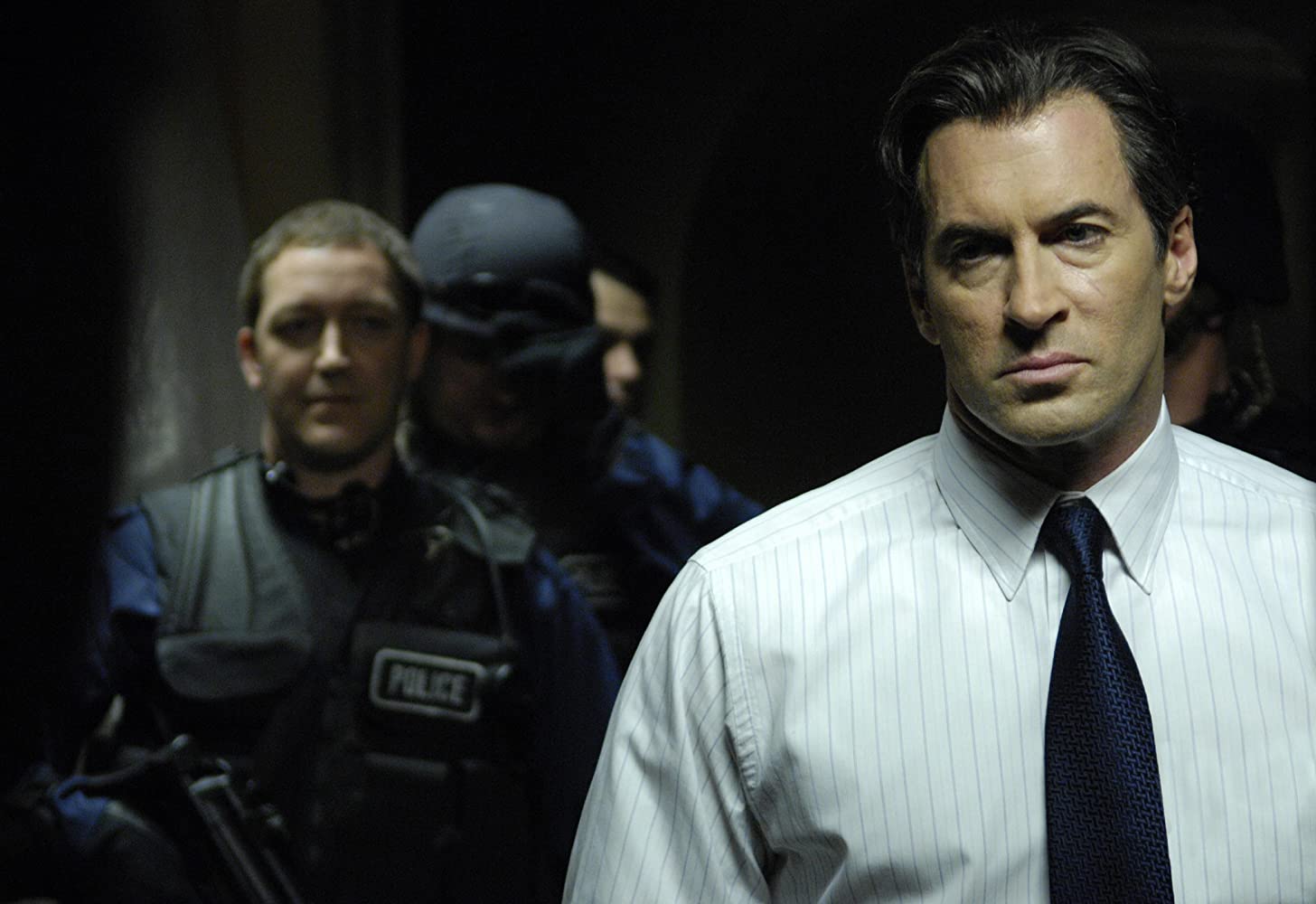 Even down to the tagline: “If it’s Halloween, it must be Saw.”