We’ve probably all done it. We’re out with friends, and we meet someone in a bar. We let them buy us a drink and begin enjoying each other’s company. Maybe we even go outside with them to have a smoke or for some quiet conversation. Most of us think nothing of it; most of us have the idea that people are inherently good, and we don’t have to always look out for the predator in the room. That’s where horror movies sometimes snap us back to reality.

Hunted is one of those horror movies. The Vincent Paronnaud written and directed movie begins with a scene of a mother and son in the woods. The survivalist mother is trying to teach her son to beware of people and what may be coming in the world. She begins telling a campfire story about Nicodemus and his followers trying to make it through the woods after a battle, running out of food, and turning to cannibalism for sustenance. The only problem is the young girl that they were about to cannibalize had the woods on her side and wolves came to her rescue. “The company of wolves is better than the company of man,” says the mother, and this becomes the theme of the larger story.

The movie really tells the story of Eve (Lucie Debay) who needs a night out. She’s having trouble at work, she’s having relationship issues, and she just needs to take a minute for herself. At a local nightclub, she is hit on by an obnoxious man and while having difficulties rebuffing his advances, she is assisted by a helpful stranger (Arieh Worthalter). Feeling protected by this new friend, she allows him to buy her a drink and begins dancing with him. As things sometimes happen, they take a walk outside and he coaxes her into his car for a make-out session. The problem is, she finds herself to be a little too trusting when she sees his accomplice (Ciaran O’Brien) enter the car and they begin driving away with her. This is where this movie shakes me. I’ve been in similar situations. I’ve trusted in the kindness of strangers when I probably should have been more wary. By the grace of whatever divine intervention you recognize, I was spared something terrible. Eve could be any one of us—that’s what really makes this movie terrifying.

Eve begins to fight back and soon the men let her out of the car. She runs to a convenient store for help where she obviously hasn’t learned her lesson because when the convenient store clerk offers to drive her somewhere, she accepts. Not sure that was the best plan given when she has just been through. But wait, it gets worse. Her abductors return for some further menacing and soon Eve finds herself in the trunk of their car. 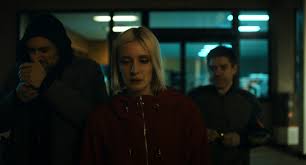 This is where Eve’s strange accomplice comes into play—Mother Nature herself. The assailants find themselves swerving to miss hitting a wild boar who has wandered onto the road causing a significant accident. When the car flips on its roof, Eve escapes the trunk and runs into the forest. Soon, however, the assailants give chase.

What ensues reminds me a bit of The Last House on the Left and it is just as anxiety-inducing. The audience witnesses as Eve spends the bulk of the movie running from these assailants who are now fighting each other, and gruesome violence ensues. The beauty of the movie is that the forest comes to Eve’s aid just when she needs it most. For example, when Eve is exhausted from running and needs respite, a deer appears from nowhere and offers her a place to lay her head.

At one point, Eve comes upon a young boy whose mother has just been killed by Eve’s primary assailant. This is the very same mother and son duo to whom we were introduced at the beginning of the film. The mild-mannered boy who is still not at all interested in a survivalist lifestyle finds enough courage to shoot the man with an arrow and help give Eve some leeway to escape. But, once again, it is nature that really comes to her aid when a raven attacks the man and gives Eve a way out.

There’s a lot to unpack with this movie and some other reviewers have called it a retelling of “Little Red Riding Hood.” I suppose if I stretch my imagination, I could see that (I mean, Eve is wearing a red jacket). It is a bit difficult to understand why nature would come to this woman’s aid and what her connection is with nature without accepting that theory. We don’t have a lot of backstory on Eve and when we’re first introduced to her, she is on a construction job site—not something that leads us to believe that she is exactly one with nature if she’s clearing it to make way for more housing. 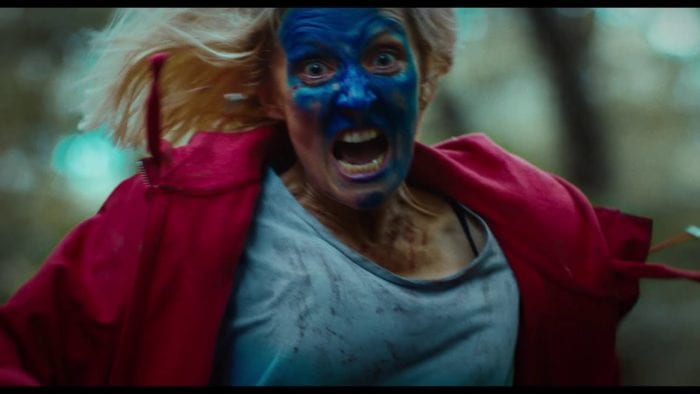 The end of the movie is problematic for me as it really seems to go off the rails in a few different ways. Eve is finally angry and ready to fight back. She’s had enough. Here, we finally see the strong woman that we know is inside Eve from the very beginning. But what happened to the boy who tried to save her? He’s lost to the wind. And suddenly there are paintballers that appear out of nowhere, causing havoc for Eve as she fights with her assailant…yet, no one tries to help her (and she is obviously in need of help). For whatever reason, the assailant begins hallucinating, and we aren’t sure why. Then, there’s the movie-ending fight in the housing addition (maybe the one that Eve was working on?) that seems more comical than terrifying. Of course, nature wins again, and Eve is saved by a dog who resembles a wolf. Wow, that’s a lot to pack into the last 20 minutes of the film.

I’ll let you decide if you think this is an updated “Red Riding Hood” tale or if it is a tale of a strong female aligned with nature versus man. I think I’m leaning toward the latter. I will say, though, that this movie left this horror veteran shaken in a way that is going to make me think twice before putting myself in questionable situations again, and I think that’s a moral of the story worth taking.