In 2002, Capcom had not one, but two at-the-time exclusive Resident Evil titles to roll out for Nintendo’s amazing purple lunchbox that was the GameCube, and each were designed to show off the hardware capabilities of the console. The first game was a prequel to every other entry in the series, and the other was a from-the-ground-up remake of the original, where literally everything was redone, tweaked, while adding in plenty of new elements. Today I’m discussing the latter, although we’ll get to the aforementioned prequel next week.

To start with, let’s briefly recap what the original game in the franchise brought to the table. It didn’t create the survival horror genre, but it popularized it with deliberately clunky-but-simultaneously- fine-tuned controls, prerendered backgrounds that let the developers make the game look better than it actually was, an exceptionally campy B movie atmosphere with paper-thin characters and some of the best bad voice acting of all time, and instantly iconic gameplay that mixed horrific creature designs with puzzle and exploration elements. It was a cocktail of different genres that came together nicely, and showed the world that video games could be just as scary as a cheesy horror movie. 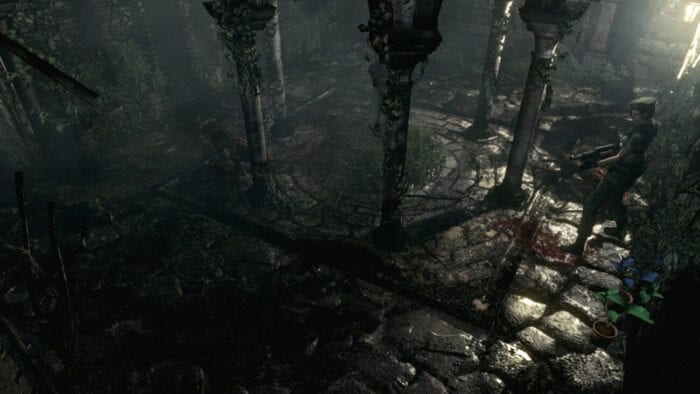 The thing is that, even by the time this REmake came out, the original already felt dated. The low-res character models were downright ugly, the brightly lit corridors of the Spencer Mansion detracted from the atmosphere the game was going for, and the updated PC Director’s Cut made some smart changes, but also added in some really dumb stuff like horribly inappropriate music. Capcom agreed, and unleashed this game on the world near the beginning of the GameCube’s lifespan, and the game was—and still is—the absolute platinum standard for what a video game remake should be.

With the added horse power of the GameCube, once charmingly simple character models turned into shockingly realistic ones (the more recent HD version of the game further cements how ahead of its time the tech was). The prerendered backgrounds had an infinitely higher amount of detail in them, and looked so much scarier than in the original. They even changed some things up with the fixed camera, with one of my favorite instances being when you walk into a particular room about midway through the game, you see a zombie dangling from a noose. Then, later on, you see that same noose, but it’s empty. The zombie is out and about, and it wants your skin. Where the original has a goofy sort of charm to it, this REmake feels genuinely disturbing and creepy even in its quieter moments and despite the still-silly story (although the voice acting is way better).

For most games, that would be enough. And for many games these days, that’s where developers call it a day. Give a beloved game a face lift, and bam you got yourself a “remake.” But like John Carpenter’s The Thing compared to the original cheesy 50s movie, REmake took the original concept and ran with it, expanding on almost every single mechanic to create a game that truly feels like you’re surviving by the skin of your teeth, while death waits around every corner. 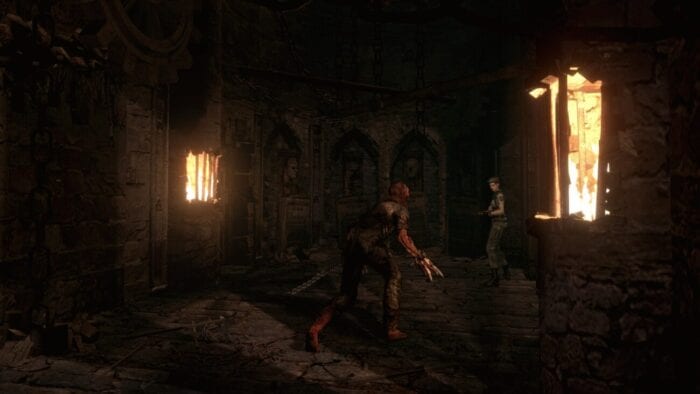 One of the biggest shake-ups to the original’s formula is the Crimson Head enemies. Whereas in the original, you were done with a zombie once it’s gone down, REmake grins viciously and turns the very idea of killing a zombie into an important choice. Unless you decapitate a zombie (tough to do without the shotgun) or burn it (with extremely limited Kerosene), any defeated corpse will come back as a much more vicious foe. Crimson Heads can run fast, have claws that can take your head off, and are all-around kind of terrifying, especially when you can hear one padding its way towards you, but can’t see it due to the camera angle. If survival horror titles are a series of important decisions made with limited resources, REmake took it all a step further and made the very idea of killing an enemy, something that should be a safe choice, feel stressful and dangerous. That’s brilliant in my eyes. That’s how you make players feel vulnerable even when they play as a heavily armed police officer.

This is all to say nothing of the changes to puzzles, item locations, boss encounters, and more. Yawn, the iconic giant snake from the original, now shows up more often, his fight happens in an entirely different arena, and is much more challenging. Meanwhile brand new encounters were added as well, including a really great sequence where you must combat a gigantic great white shark while it bashes against a window, threatening to break its way into the underwater office you’re in. It’s a supremely unnerving fight for some reason, even if it is harmless once you drain the water.

From a lore perspective, the biggest addition is undeniably Lisa Trevor. She is essentially Umbrella’s guinea pig for every virus they had created up to that point, and the result is a monster that is borderline invincible, disturbingly designed, and quite tragic, which is a rarity for a series with such nonsensical and sterile storytelling. While she’s not a persistent threat throughout the game, she does stalk the player during a few key sections, echoing the likes of Mr. X and Nemesis from the second and third games, respectively. Even when you “defeat” her in her boss battle, it’s unknown whether or not she’s truly dead. She’s presumably in the mansion when it blows up, and we haven’t seen her since, so yeah, she was probably killed. Maybe.

She also adds much needed relatability to the game’s roster of monsters. While all the BOWs in the series were at one point or another normal creatures, Lisa is the first human-turned-monster to be given any amount of backstory. She’s essentially a virus-riddled Leatherface, obsessed with her mother and prone to ripping the faces off of people who resemble her and putting them on her own. Like Leatherface, we never see what she truly looks like, but her hunched back, abnormally long arms, and tentacles coming from her back still make her an embodiment of body horror that is quite scary. 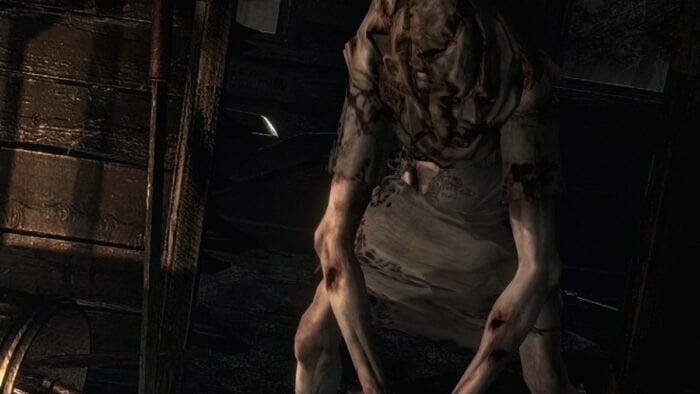 It all adds up to a REmake that redefines the original in every conceivable way, rendering the 1996 release almost obsolete. Sure, that one has its charms, but it’s very difficult to go back to after playing through this refined, much scarier experience. But there was one other remake of the original, although it’s more of an upgraded port: Resident Evil: Deadly Silence on the Nintendo DS. This was a decent enough effort to bring the original to the world of portable gaming, and even had a few new features of its own.

The graphics are rough, the uber-cheesy FMV videos (as well as the original’s voice acting) are back. While the game lacks the new areas, upgraded graphics, and new mechanics of REmake, Deadly Silence actually remains worthwhile, acting as a different beast entirely. You could play a more or less 100% faithful port of the original, with all the familiar puzzles, item placements, and more, or you could play a tweaked version for the DS, which took advantage of the system’s unique hardware with touchscreen-based puzzles, and bizarre-but-surprisingly-enjoyable knife fights against hordes of enemies. The latter doesn’t make sense narratively, but the controls are surprisingly intuitive and fun to use.

No, this isn’t anywhere near as good as the GameCube REmake, but it’s a surprisingly solid port of the original that goes a long way to preserving it. Plus, at the time of its release, it was the only way to play the original on the go, although now that REmake is available for Nintendo Switch, so I guess that’s another version of the original that’s been rendered obsolete. But that’s because the game is really that good. The original version of Resident Evil might be the more important and influential title, but its GameCube REmake is a near-perfect refinement of all the ideas at work in the PS1 classic. It is the greatest video game remake ever made, feeling like the original but expanding on everything, and it has yet to be surpassed in this age of remasters, rereleases, remakes, ports, etc. etc.

The same engine was used for Resident Evil 0, the prequel that released later in 2002, but as we’ll see next week, just because it wears the same skin of REmake doesn’t mean it’s up to snuff.

Looking for more on Resident Evil? Try these articles out:

Is Resident Evil Outbreak File #3 On Its Way?