Darren Aronofsky is one of today’s most prolific directors known for such mind-bending works as Pi, Requiem for a Dream, The Fountain, and Mother! One might even say his movies are downright uncomfortable to watch at times. One example of this type of uncomfortable film is a personal favorite, 2010’s Black Swan. Billed as a drama, I would posit the movie is a perfect example of a mixture of both psychological and body horror—stay with me; I’ll explain.

Black Swan follows the story of Nina Sayers (played by the iconic Natalie Portman) who is struggling to maintain her sanity after being cast in the lead role of Swan Lake. Sayers is a gifted dancer who is suffocated by her overbearing mother, Erica (Barbara Hershey), a former dancer herself. Erica treats Nina as a child even though she is a grown woman, no doubt stunting her maturity and causing difficulties in Nina’s career.

The first sign of Nina’s psychological issues appears when Erica is helping her get dressed to go into the dance studio and notices scratches on her back. She asks about the scratches and Nina brushes them off even though her mother seems to think that she may be doing this to herself out of stress leading to self-destruction. Soon, Nina catches the eye of showrunner, Thomas Leroy (Vincent Cassel), who begins grooming her to take the role of the Swan Queen. However, Thomas’s methods are abusive and sexually provocative leading to Nina’s mental decline as the film advances.

The very backdrop of the film lends itself to the premise of both psychological and body horror—the life of a ballerina. The life and training of a ballerina is difficult, and Nina embodies all the issues that surround becoming the perfect dancer. She struggles with body issues and eating disorders, her feet are ravaged by constant dancing, and her body is breaking down at an early age. Add to that the psychological damage of having to be flawless in both her mother’s and her company’s eyes and the perfect storm is created.

We begin to see suggestions of Nina’s cognitive decline early in the film. Aronofsky does an incredible job of hinting at madness both visually and in the script. In one scene, Nina is walking home from ballet practice and sees a woman walking toward her on the sidewalk. For a split second, we see that the woman is Nina herself. However, when Nina turns around to take a second look, it is just another stranger. This type of thing happens again when Nina is getting out of the bathtub and her image in the mirror appears slightly different than her actual face. Another hint appears a few times throughout the film when Nina looks at her mother’s paintings and sees the faces change ever so slightly in a mocking manner.

In one brilliant piece of camera work, Nina’s friend, Lily (Mila Kunis), comes home with her after a night of hard partying and we see them both in the reflection of a mirror. Subtly, we see Lily exit the scene from one side of the mirror while Nina remains visible giving the viewer an inkling that Lily may not actually be there at all. This is a further suggestion of Nina’s psychosis and possible split personality. Yet, this behavior can all be explained away by the stress of everyday life until the body horror enters the picture.

Body horror insinuates itself in a larger way than the psychological horror aspect of the film. From essentially the beginning of Nina’s obsession with becoming the Swan Queen we see changes in her body, such as her skin taking on the texture of a bird every now and then followed by other strange metamorphoses. In one rather sickening scene, Nina discovers a hangnail on one of her fingers. She pulls at the nail ripping the skin down the side of her finger. She winces in pain but when she looks back down at her finger in the sink, she sees that nothing has happened to her body at all and her finger is intact. In another scene, we see the scratches on her back becoming more significant and as she is inspecting them, she extracts a black feather out of her skin depicting that she is so obsessed with the idea of dancing the Black Swan that she is actually morphing into the character. 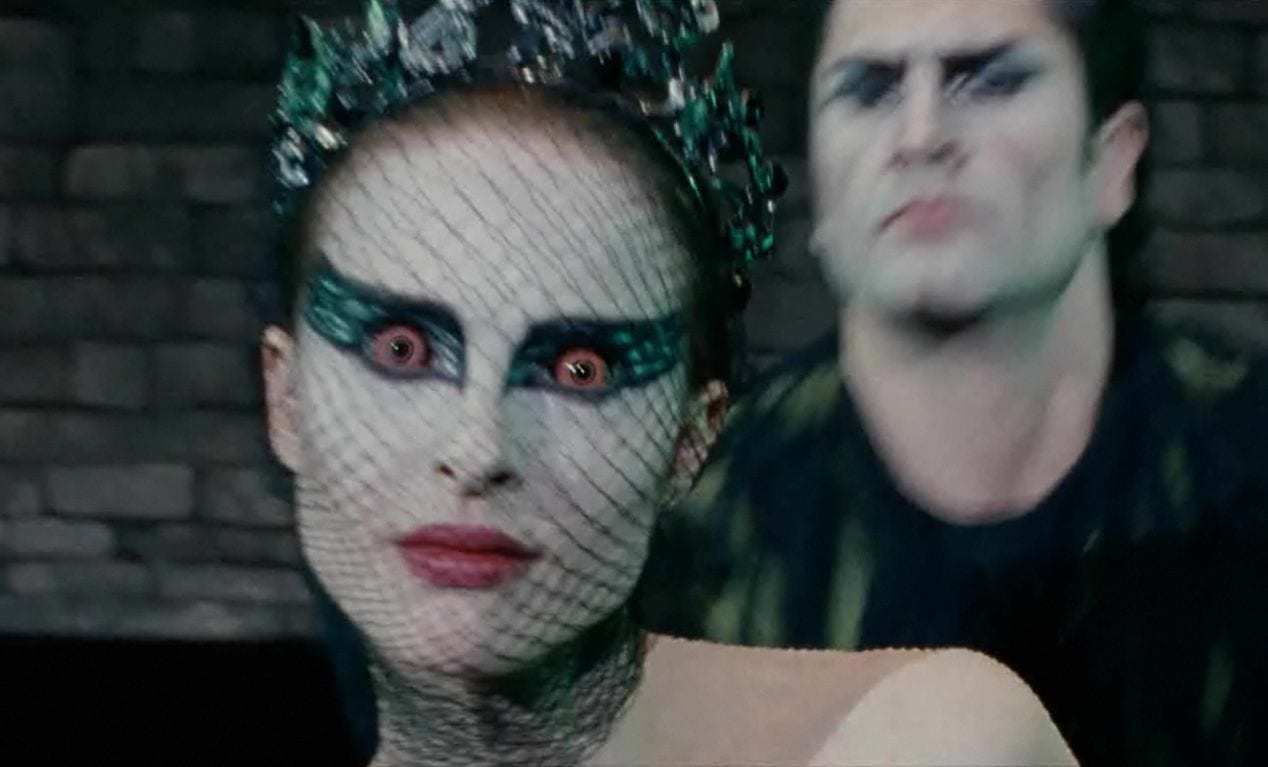 As the film progresses, Nina continues to break down mentally and physically until we reach the penultimate scene in which she fights with Lily in her dressing room before taking the stage for her big performance debut. In this scene, the two women fight over who is going to dance the big finale and Nina ends up stabbing Lily. Once again, Nina becomes so obsessed with dancing the Black Swan perfectly that her body begins to change—her legs break and become that of a swan’s while she begins to sprout feathers and wings.

Between dances, Nina runs back to her dressing room for a costume change and sees blood spilling out from under the bathroom door where she has hidden Lily’s body. As she is feverishly trying to conceal the mess, there is a knock at the door. When she opens it, it is Lily herself on the other side congratulating Nina on her spectacular performance. Nina looks as shocked as the viewer and we now know that she didn’t stab Lily at all but rather, she stabbed herself.

In the finale, she returns to the stage to dance a perfect Swan Queen and upon running up a lift to the final scene, we see the extent of her injury. She is bleeding profusely, and the viewer is clued into the fact that she is not going to survive. She takes a dive off the lift onto the padding below and is joined by the entire company, along with Thomas, who is congratulating her on her performance until Lily notices the blood pooling on Nina’s white costume. Thomas immediately calls for medical attention and as Nina takes her final breath, she utters the words, “I was perfect.” This final act shows just how demented she has become that she is less concerned with the idea of her own death than she is with dancing the perfect ballet.

Black Swan embodies the brilliance of Aronofsky as a director as he continues to ramp up the sadness of mental illness along with the discomfort of body horror throughout the course of the film. And while this film is more than a decade old now, it continues to stand up as one of his most unsettling works. If you haven’t seen it in a while, do yourself a favor and take another look.