Sometimes you watch a movie because you’re confident it’s going to be good. For example, when I saw Jordan Peele’s Nope a few weeks ago, I was pretty sure I was going to like it. But other times, you watch a film because something about it just draws you in even though you have no idea how it’s going to turn out, and for me, Tin Can fell squarely in that category. The trailer intrigued the hell out of me with its mysterious sci-fi visuals, but I had no idea if I was going to like it or not. I decided to take a chance on this film, and after watching it, I’m glad to say I definitely made the right choice.

Tin Can was directed by Seth A. Smith, and it stars Anna Hopkins, Simon Mutabazi, Michael Ironside, Tim Dunn, Kristin Langille, Amy Trefry, Chik White, and Woodrow Graves. It takes place during the onset of a deadly plague sweeping the population, and one scientist, a woman named Fret, is on the brink of discovering a cure. But before she can finish her work, she’s knocked out, kidnapped, and placed in a small metal pod (the titular tin can), and when she wakes up, she has to figure out how she got there and how she can escape before it’s too late to save the human race.

For about the first 10 minutes or so, Tin Can sets the stage and tells us a bit about Fret’s life before she’s abducted, and right off the bat, I found this part oddly captivating. See, in a certain sense, it’s actually quite dull. Most notably, it looks pretty low budget, and I found the acting to be hit or miss at best, so from a purely technical point of view, I had a lot of problems with this little prologue.

But despite all that, I still found myself enjoying it. The world this movie sets up feels totally real, and I was very intrigued by the plague storyline. I really wanted to see where the film would go from there, so the technical flaws didn’t bother me in the slightest. 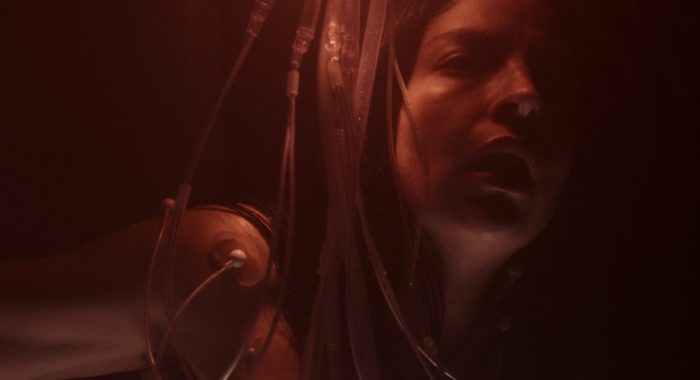 Then, when the story of Tin Can begins in earnest, it gets even better. When Fret wakes up in her metal pod, she has absolutely no idea where she is or why she’s there, and Anna Hopkins’s performance as the kidnapped scientist is awesome. While she admittedly doesn’t have a ton to do (let’s be honest, you can’t do much crammed into a small metal pod), I completely bought into her character. I believed she really was stuck there against her will, so I couldn’t help but root for her to get out and finish her work of saving the world.

What’s more, the pacing in this part of the film is also really good. After Fret pulls out a few of the tubes she was connected to, she slowly begins to examine the pod, and she also starts talking to some of the people in the pods around her. That gives her a bit more information about her predicament, but it also deepens the mystery at the same time, giving Tin Can a really interesting flow.

This act of the movie continually alternates between answering your questions and raising a whole bunch more, so even though the idea of a person trapped in a small metal pod may sound like it’s inevitably going to lose at least some steam, it never really does. Sure, there were a few scenes that I thought went on for a bit too long, but they were pretty few and far between, and they never overstayed their welcome by more than a few minutes. So on the whole, this part of the film did a great job of holding my attention, and I couldn’t wait to find out what was coming next.

On top of all that, this act of the movie also shows us just what the mysterious disease does to people, and it’s some of the most effective body horror I’ve seen in a while. It’s not bloody or gory, but it hits on an instinctual, almost primal level. Granted, I don’t think everyone is going to react to it the way I did, but I’m sure there’s a large segment of fans who are going to find it almost unwatchable (in a good way). 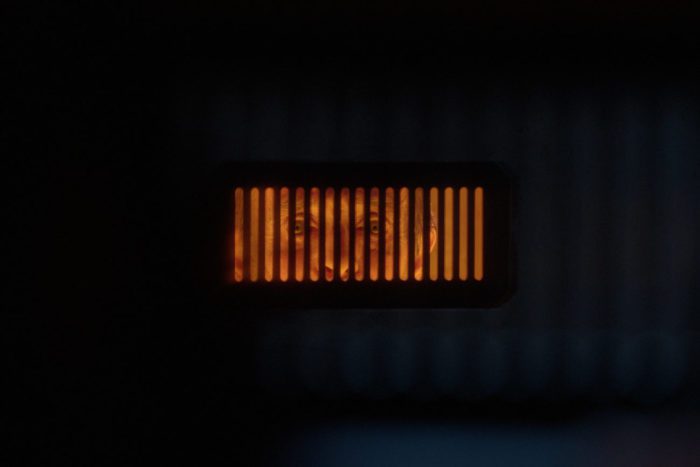 Then, at about the one-hour mark, Tin Can changes gears a bit, and it becomes really weird. I’m not going to spoil any of the details, but I will say that it gets both better and worse. On a visual level, the final act of the film is spectacular. It’s gorgeously shot, it makes excellent use of color and lighting, and it leans into the horror in some really cool ways.

However, on a narrative level, the movie kind of falls apart in this final act. It becomes a bit tough to follow, so while I more or less got it by the end, I was still left scratching my head when the credits began to roll. The way the story wraps up makes it feel like the filmmakers were more interested in thematic closure than narrative closure, and while I get that, I still think they should’ve paid a bit more attention to the story.

But to be honest, that issue didn’t really bother me too much. I enjoyed the rest of the film so much I had no trouble forgiving the narrative problems in the final act, and when the movie finished, I was a very happy man.

So all in all, if you’re looking for some good new horror to watch, I highly recommend that you check out Tin Can. It has good acting, some excellent horror, and a really intriguing mystery, so while it didn’t quite crack my top 10 genre films of the year, I still had a really good time with it. And if this sounds like something you’d enjoy, I think you will too.

Tin Can hits select theaters on August 5, VOD on August 9, and home video on September 6.