What would the spooky season be without some classically scary supernatural scares? Albert Pintó’s newly released 32 Malasaña Street gets everything right about your typical haunting film while also managing to reenvision some well-known conventions of the supernatural horror subgenre. 32 Malasaña Street imbues the story of a family’s terrifying encounter with a hungry spirit with contemporaneous political and cultural meaning while also managing to scare the pants off of you.

The film’s pacing is slow—something that is made apparent by its opening sequence, in which a small boy takes about a full three minutes to walk down a hallway and pick up a marble—but don’t let this slow, tense build-up fool you. I’ll be honest. I sat down with 32 Malasaña Street thinking that it wouldn’t get to me, but I eventually found myself watching through my splayed fingers. The set, scenery, and lighting effectively convey a stifling sense of confinement and misery that make the film’s scares all the more dreadful.

The film’s spookier elements are underpinned by rigid social dynamics of power and control within the family. This correlation makes the circumstances of the film’s paranormal attacks all the more frustrating and increases the stifling feelings of inescapability and futility that the characters experience. To appreciate the lingering unsettledness of the haunting at 32 Malasaña, it is important to understand how the character’s dynamics interplay with overarching themes of denial, isolation, and suppression.

The plot begins in the mid-1970s with the Olmedo family moving from their rural village to a spacious apartment they have mortgaged in Madrid. The family consists of the strong and endeavoring father Manolo (Iván Marcos), the caring and gentle mother Candela (Bea Segura), and three children. Candela’s older children, Pepe (Sergio Castellanos) and Amparo (Begoña Vargas), are more than ten years older than their doted-upon younger half-brother Rafa (Iván Renedo).

The family’s grandfather Fermin (Jose Luis de Madariaga) joins the family in their move to Madrid. He is similar to Rafa in that he requires a certain degree of supervision and also in that he is immediately sensitive to the continuing presence of the apartment’s previous resident: a menacing, dysmorphic woman who goes by Clara and who happens to long for a family of her own. Yes, she is dead, and no, she doesn’t mind stealing the child that she longs for.

Ironically, the Olmedo family escaped to the city to chase opportunity and prosperity, but the horror of their situation becomes all too real when they find themselves trapped by minimal social mobility and with no means of escape from their contractual obligation to pay off their mortgage. This sense of being fiscally and physically trapped only reinforces the social roles that were preordained for the family by their rigid society. Amparo is a young woman on the cusp of leaving her girlhood behind, and she dreams of traveling and seeing the world. Instead of enjoying city life for herself, she is stuck within the confines of the apartment caring for her grandfather and her younger brother. Manolo is not even able to protect his family when they undergo mysterious and disturbing supernatural attacks because he is stuck working long hours in a demanding low-wage job.

This juxtaposition of Amparo and Manolo’s cisgendered societal restrictions clash openly with the vicious specter that is Clara. As the film’s mysteries deepen and unfold, the Olmedos learn that Clara was a transgender woman who was never accepted by her society or even by her own family. In fact, she was shut away for her entire life in 32 Malsaña, shrouded by her family’s shame and neglect. Manolo’s domineering masculinity and Amparo’s youthful femininity become to Clara the objects of her frustrated rage and the obstacles to what she truly desires, and she finds her desires reflected in Rafa and Pepe. Rafa, she desires to make her son as a testament to her own womanhood through motherhood, and Pepe, well…she just desires Pepe sexually. Eventually, it is the sacrifice of Manolo and his patriarchal masculinity that enables the family to escape her clutches. 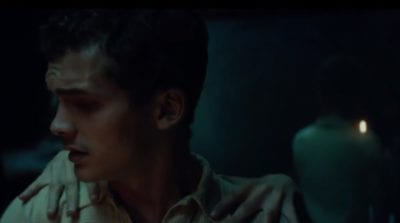 Amparo traces down Clara’s sister to get the details of Clara’s life; the sister hideously and gleefully relays how she was disgusted by Clara’s subversive identity, how she partitioned their apartment into two to physically separate herself from Clara, and how she refused to answer her sister’s calls each night for the rest of their lives. The film artfully conveys how in this instance, it is Clara’s living sister who is the seat of the vicious malice that is normally attributed to supernatural entities in these genre films. Instead, the audience is afforded an understanding of how Clara’s traumatizing haunting is the effect of her own trauma and how the pain she inflicts is an uncontrollable, seizing echo of her own pain in life.

I am the immense shadow of my tears.

32 Malasaña Street is a satisfying ghostly tale in its own right, but its contextualization within the political and cultural history of 1970s Spain makes it all the more meaningful. It is important to remember that the film is set just after the end of the Francoist dictatorship in Spain, which lasted from 1936—1975. The dominant culture’s ethos of authoritarianism and fervent suppression of diversity is promulgated in the family relationships represented in the film—both in the Olmedo family’s relationships and especially in the family dynamic relayed by Clara’s sister.

More pointedly, LGBTQIA rights were widely suppressed in Spain during the dictatorship of Francisco Franco. During his regime, thousands of homosexual people were incarcerated, displaced, or subject to cruel medical treatments in mental hospitals, marking his rule as a “homophobic dictatorship.” The world-renowned poet Federico García Lorca, who identified as a gay socialist, was assassinated by a nationalist Spanish militia during the Spanish Civil War in 1936. This horrendous event marked the context of the dawn of Franco’s dictatorship in global memory and serves to distinguish the connection between ideological and personal subjugation in fascist Spain. Homosexuality was not decriminalized in Spain until 1979, four years after Franco’s death. 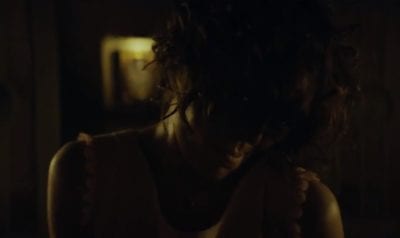 Beyond these more grievous and severe political allusions, Albert Pintó also deliberately invested 32 Malasaña Street with other more uplifting elements unique to Spanish culture. The family’s escape from the clutches of Clara’s rage and from their obligation to the very apartment at the end of the film are evocative of new hope at the dawn of Spanish democracy. Other more mundane objects and elements in the film that are unique to Spanish culture are used to convey terrifying plot elements. Their appearance is employed in such a way that it is not the objects themselves that convey evil but instead the way that people put them to use.

Using iconic Spanish elements to stir up fear—using what makes us unique, different, and remarkable: spinning tops, marbles, boleros, corralas, clotheslines in inner patios…My job was to make sure that these elements around us, which are not evil in any way, became terrifying, just as the screenplay intended.

32 Malasaña Street is a rewarding viewing experience that leaves you to take away many of these deeper levels of cultural commentary and meaning. Even without this contextualization, though, it is just a good ol’ fashioned scary movie. It has a high thrill and scare level that will sneak up on you, and its cinematic effects range from hauntingly beautiful to terrifying. 32 Malasaña Street screened at the Nightstream Film Festival on October 9, and it releases on Shudder October 22.