There is a stereotype of modern haunted-house horror, the type popularised by James Wan’s Insidious and The Conjuring, one that sees them as bland jump-scare-fests in musty old buildings with creaky floors and creepy children, tight string soundtracks, slow movements, and a constant audience reaction of “don’t go in there!” These films are usually accompanied by a title along the lines of “Bad Thing” or “The Scary Place,” a poster which shows the afflicted protagonist or child victim before the house with a subtitle reading “Evil Has Found Its Home” or some such. It’s a tired old stereotype and one I’d be happy to be rid of, and yet cookie-cutter horror persists. It’s not the trash some people view it as, but little more than serviceable. These are genre films that are fine to watch with a little drink on a late night but could bear to think outside the box, just that little bit more.

Enter The Cellar, a film with big ideas (a shifting, impossible building a-là House of Leaves) and one hell of a genre setup to escape from. One that opens the door of haunted house horror, fumbles for the light switch, trips, and smacks all of these stereotypes on the long and clumsy way down. And just like its titular non-Euclidean space, it spends so long in winding, recursively familiar places, only to venture beyond old tropes to find itself in locales one could never have imagined.

Framing the haunted house is a story of a cold corporate “influencer” brand manager mother Keira Woods (Elisha Cuthbert) attempting to reconnect with her rebellious anarchist daughter, Ellie (Abby Fitz). As the cellar exerts its influence on them, it only serves to distance them more— making their connection necessary. It’s a clever metaphor, ultimately too awkwardly shoehorned in to be truly impactful, even with great performances right there to lead it.

The Cellar is headed by some great performances, but even Cuthbert’s wonderful nervousness and Fitz’s delightful creepiness aren’t enough to make The Cellar’s initial script anything more than rote or tiresomely melodramatic. 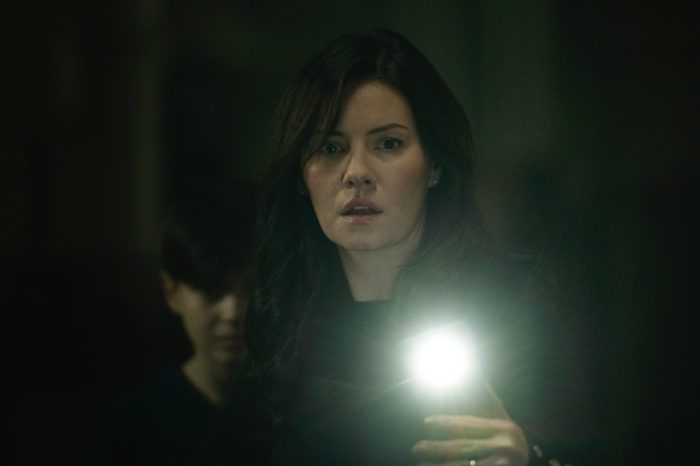 It’s equally frustrating because the parts of The Cellar that work REALLY work. The titular space is so delightfully weird, dwelt in by chaotic things, a scarred underplace where reality slips between the fingers in the long dark.
Take one of the film’s most spectacular scares: a phone call to her mother records Ellie, terrified, walking down the cellar’s steps. Keira comforts her and encourages her to count down the steps with her, just 20 of them. So she begins counting “1, 2, 3…” and then “14, 15, 16…” until finally “…20. —21, 22, 23…” It’s so wonderfully chilling and creative, brilliantly mediated, and fantastic at expressing — without showing — the anti-euclidean nature of the space. All the while, Cuthbert’s expressions do the heavy lifting, of showing a mother suddenly faced with the unknown.
This and its explanation, toward the middle, a hokey combination of alchemical algebra, occult mathematics, and misunderstood Kabbalah, monologued by a madcap professor with an air of the Miskatonic, are so brilliantly off and charming that it’s frustrating that they’re trapped inside such an enclosed space.

Enclosed, but extensive, the film is relatively slim at around 90 minutes long, but wow does the first half feel LONG—hideously, aggravatingly long. The film’s first half is so utterly humourless, frustratingly so, and the presence of front-loaded scares just makes it feel longer. There’s a feeling within each plot beat that I’ve seen this all before, yet rather than turning my brain off, enjoy the ride (as in other middling supernatural horror like 2018’s Malevolent). The presence of such sincere novelty and dire narrative gravity erodes much of the joy. Clear intentions to move toward something straightforwardly dramatic are hamstrung, epitomised by the half-hearted understandings of anarchism (presented as juvenile and rebellious, a frankly callous misunderstanding) and influencer culture (vain and misogynistic but well-intentioned), an intention toward horror seeming to overwrite them, leaving them two-dimensional and awkward. There’s a feeling of wasted potential about the opening half, great concepts muddled by an overly sincere script, and a tendency toward hard and fast genre tropes, where they could go against the grain. It’s just too safe. Which makes it so surprising when it starts to develop a sense of humour. All the pieces line up, all that exhausting setup, and then… And then The Turning Point happens, preceded by a countdown of all things, and the film’s entire ethos swings away from the mundane toward the camp and absurd. All of a sudden the film starts laughing with you!

It is so odd, so bombastic a shift toward genuinely satisfying filmmaking, and utterly brilliant, a shift so radical it was either completely intentional or the result of a hilarious fluke. Is this all a big joke? A riff on our expectations? Or did writer-director Brendan Muldowney just get tired of the same-old-same-old? It’s so inconceivable and moves at light-speed into the long dark nothing, a horror climax that ups the ante with a combination of wretched images and “why not!” ridiculousness. Intentional or not, the result is an unforgettable ending that feels so much like the film ought to have been in the first place. It’s just creative joy. Both cosmically terrifying and sincerely silly, an apotheosis of ideas that the first half shied away from. I find myself asking if it was worth enduring such true dryness to arrive at something effortlessly fun.

My answer, I think, is no. There are better films out there with better twists, but it is still fun, and worth a watch if you’re not taking it too seriously. It’s just melodramatic enough to make for great background noise until the climax hits.

The result is satisfying but immaterial nonsense, a horror film that builds from less than zero into something truly fun, but which is hampered by an absolutely bafflingly dull first half.

Old haunted houses are well-trodden ground at this point, and it’s frustrating that The Cellar treads so hard on the barren wood, only to stumble into newly fallen dust in a brilliantly weird, cosmically frightening second half.

The Cellar had its English premiere at  Grimmfest Easter 2022. It is available on Shudder.