When you think of movies that challenge viewers to become better people, The Texas Chain Saw Massacre* is probably not the first one that comes to mind. Most people see it as just another slasher film with little (if any) real moral value, but I would suggest that there’s actually a lot more to it than just that. This movie is not just violence for its own sake. Rather, it uses violence to make us think more deeply about animal rights and human dignity, and it challenges us to act in ways that are consistent with our moral convictions.

The key to all this is that the Sawyers aren’t just your run-of-the-mill cannibals. The film provides an intriguing reason why they like to kill and eat people: they’re essentially a family of slaughterhouse workers who are a bit too obsessed with their work. Toward the beginning of the movie, the main characters unknowingly pick up Leatherface’s brother as a hitchhiker, and he proudly explains that his family works at a slaughterhouse. He says, “My family’s always been in meat,” and he even shows them pictures that he took at the slaughterhouse. From the way he talks about it, it’s clear that he loves this line of work, and the rest of the movie shows us that he’s not the only one.

In the famous dinner scene in the third act, the Sawyers try to get Grandpa to kill Sally because he was the best killer in the slaughterhouse when he worked there. They talk glowingly about how great he was, and they’re clearly very excited to see him work his magic in person. This scene makes it obvious that the entire family loves slaughterhouse work just as much as the Hitchhiker does. In fact, they love it a bit too much. They’re so obsessed with killing and eating animals that they kill and eat people, too. 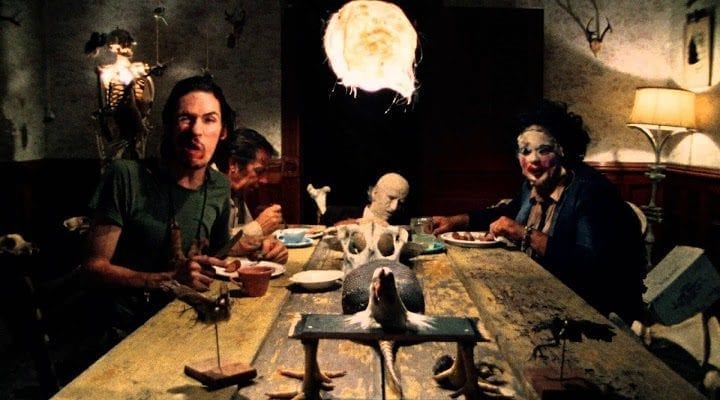 And the dinner scene isn’t the only way The Texas Chain Saw Massacre makes this point. Even though the film has the word “chainsaw” in its title, Leatherface only uses a chainsaw to kill one person in the entire movie (Franklin). He kills his other three victims in other ways, and all three of their deaths are very reminiscent of how animals are killed in slaughterhouses. He bashes Kirk and Jerry over the head with a big hammer, and he hangs Pam on a meathook and then stuffs her in a freezer. The significance of the meathook and the freezer is pretty obvious, but the hammer requires some explanation.

In the film’s opening minutes, before the main characters pick up Leatherface’s brother, they pass a slaughterhouse, and Franklin tells them all about how slaughterhouse workers kill their animals. He explains that they currently use guns that shoot retractable bolts into the animals’ skulls, but in the old days, the workers used to hit the animals on the head with a hammer. Sometimes they wouldn’t die after the first hit, and they would “start squealing and freaking out.” When this happened, the workers would have to hit the animals multiple times before they finally died.

And this is exactly what happens to both Kirk and Jerry. Not only does Leatherface bash their skulls with a hammer, but Kirk also writhes around on the ground after Leatherface hits him. Just like in Franklin’s description of the old days, Leatherface has to hit him multiple times to finally kill him. Plus, during all of these “slaughterhouse” kills, you can hear farm animals in the background even though there aren’t any in the area. The sounds are clearly meant to call those animals to mind and to make the connection between them and Leatherface’s victims as clear as possible. He’s killing them for food just like we kill animals, and therein lies the moral challenge of this film. 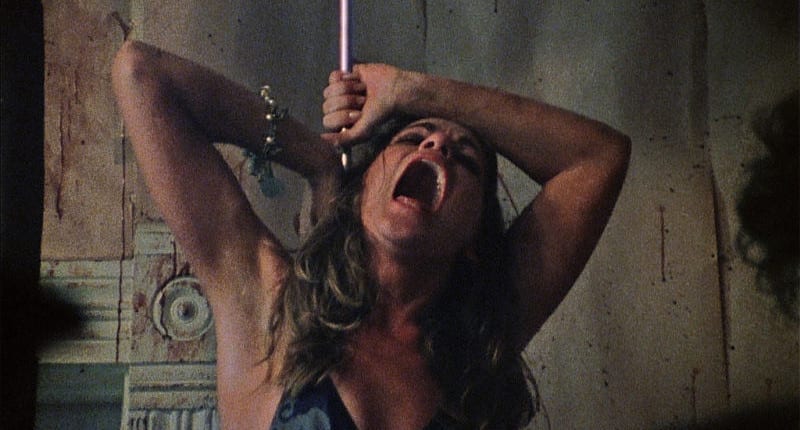 I would suggest that we can interpret the theme of killing and eating humans just like animals in two ways. On the one hand, we can take it as anti-meat and pro-vegetarianism. On this understanding, The Texas Chain Saw Massacre puts people in the place of animals to get us to understand what it really takes to give us things like cheeseburgers and bacon. Most of us will never step foot in a slaughterhouse or have any experience killing our own animals for food, so the movie tries to get us to see the cruelty involved in it by putting human beings in their place. It’s saying that it’s obviously terrible to do this to people, so it must also be wrong to treat animals this way.

On the other hand, we can also take the film to be about human dignity. The Sawyers are the bad guys precisely because they treat human beings like animals, so on this interpretation, the movie is telling us that we shouldn’t do that. It uses the extreme example of killing and eating people to make the more general point that we shouldn’t treat people like animals in any way, and that principle has other applications as well. For instance, while there’s nothing wrong with owning animals as pets, it’s not okay own people—that’s slavery.

Significantly, the movie doesn’t force either interpretation upon us. It makes us think about these competing understandings and allows us to choose either one, and that in turn forces us to rethink our understanding of people, animals, and how we treat them. It makes us question our assumptions about animals and ask why we think they’re not as valuable as human beings. It brings us face to face with the reality behind the meat we so often consume without thinking twice. So if we want to keep eating it while still condemning the murder of human beings, we’d better have a damn good reason why. If we don’t, then we should become vegetarians (or possibly even vegans). 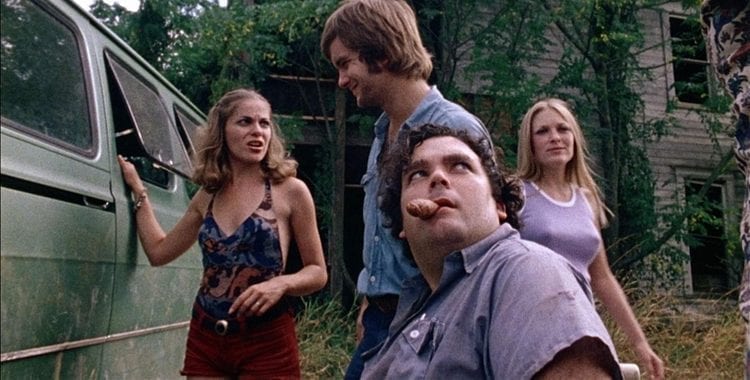 On the flip side, if we do have a reason why it is okay to slaughter and consume animals, the film challenges us to live out that conviction consistently. If we believe that people have a unique dignity simply by virtue of being human, then we have to act like it. We can’t say that human beings have dignity and then treat people like garbage in our everyday lives. We have to give everyone the respect they deserve no matter their gender, race, sexual orientation, religion, age, or anything else.

So however you choose to interpret The Texas Chain Saw Massacre, one thing is clear: this movie is more than just violence for its own sake. Instead, it uses violence as a tool to challenge us to become better people in one way or another. By presenting the Sawyers as slaughterhouse workers who love their jobs a bit too much, the film exposes our hidden assumptions about animal rights and human dignity, and it drives us to think about those issues more deeply. It challenges us to either ground our assumptions with good reasons and live them out consistently or give them up entirely and make a radical change to our worldview.

*Texas Chain Saw Massacre was the title of the original movie, but subsequent films and the remake used Texas Chainsaw Massacre, and the original spelling has somewhat been forgotten. Nevertheless, we’ve used it here because we’re nerdy horror purists!