The Texas Chain Saw Massacre (1974) is a unique film in the slasher genre. Rather than coast on the usual trappings of the sub-genre—namely reveling in the central slasher’s killing frenzy—it instead becomes a harrowing experience. The documentary and scuzzy Grindhouse aesthetic are so effective that even the most ardent fan of horror cinema question if they should be watching it at some points. I know I certainly did throughout. 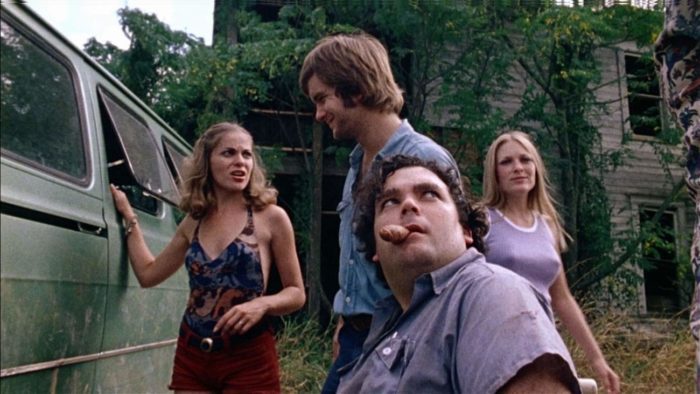 At the same time, the film has the quality of something that has been stumbled upon and found. The horror comes from a worsening situation befalling a group of young people almost in real-time, over a day. This presents an interesting challenge. The film flies in the face of convention insofar as storytelling and character arcs are concerned. However, even within the context of this setup, there’s something to be gleaned about the characters, most notably the film’s Final Girl—Sally Hardesty.

The first reference to Sally Hardesty (Marilyn Burns) comes from the John Larroquette narrated introduction, with the following line: “In particular, Sally Hardesty and her invalid brother Franklin.” The narration singles out the character and her importance to the film. Despite this, there’s something altogether humbling about Sally’s appearances throughout the first act of the film.

Aside from a few instances, such as asking where her Grandfather is buried, identifying the hitchhiker, and spotting blood smeared on the van, Sally blends into the background of the characters that pervade the film. In this way, the stealthy approach to the character, i.e not making you think that you’re watching the protagonist or Final Girl is a sleight of hand the genre regularly employs. It goes back to Psycho with Alfred Hitchcock fooling the audience into thinking that Marion Crane (Janet Leigh) is the film’s protagonist.

However, Tobe Hooper’s subtle cinematic choices, via the use of some long shots where Sally blends in the background, to presenting the character in the opening stretch are influential. Arguably, it had the most profound effect on the character of Ripley (Sigourney Weaver), who narratively and cinematically is not considered the protagonist of Alien, at least going by the film’s first two acts. This quality would also have a ripple effect in other films such as Friday the 13th (1980) and A Nightmare on Elm Street (1984) in reference to Alice and Nancy.

Larroquette’s narration also hints at a sibling relationship. A brother and sister dynamic is unique territory for a slasher film. It fundamentally strips away the sexual element of the main protagonist. This is due to the central character either having an entirely different focus or being drawn in a certain way.

This applies to Sally. Her primary concern throughout the film is the safety of the people she’s with as opposed to amorous intentions. With this in mind, Sally bucks the Final Girl trend because she’s not drawn as a virgin who finds the courage to defeat the killer who subtextually embodies their fear of men.

If anything, Tobe Hooper and co-screenwriter Kim Henkel use the early template of the Final Girl (via Sally) to meld with their own thematic concerns. The primary reason for Sally coming to Texas is to visit her childhood and grandfather’s homestead. Along the way, Sally also ensures that her relative’s grave has not been desecrated after a series of grave robberies in the local region.

With these two points in mind, the true horror of The Texas Chain Saw Massacre comes from the family that Sally and her friends encounter. Thematically, they feel like a shadow version of a typical family that would exist in Texas. It’s as though they’re a group from the nightmarish bowels of Carl Jung’s collective unconscious. 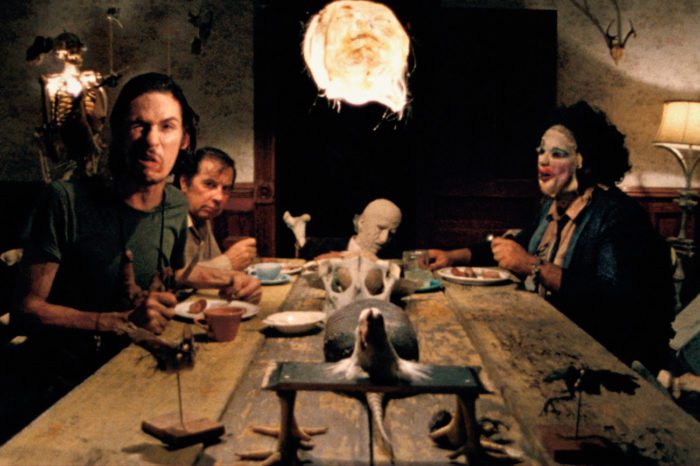 For Sally, who has the longest encounter with the family, the experience is particularly ironic and horrifying. One particularly grizzly encounter is when she comes face to face with the family’s decrepit grandfather. Out of the bunch, he’s touted as the best killer as the family eggs him on to kill Sally. In isolation, the moment is a darkly comedic nightmare that feels unrelenting in its mad capped intensity.

It’s also a crucial microcosm for Hooper and Henkel’s theme of shattering the reality of one’s preconceptions about family and home. It even feels intentional that in some twisted way, Sally is being tortured by a shadow version of her grandfather who she’s always had warm memories about dating back to her childhood. 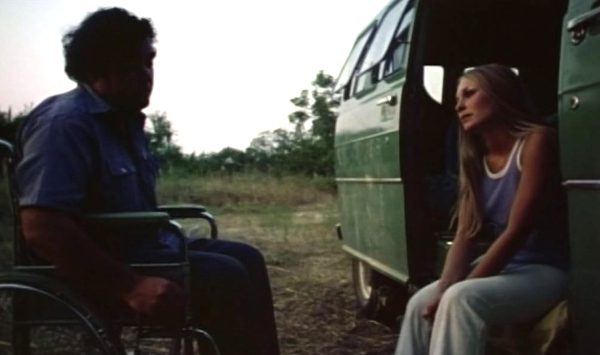 This quality also extends to Sally’s and Franklin’s relationship. In many ways, Franklin (Paul A. Partain) is already in tune with his family history. Throughout the first act, he gives plenty of lip service to his grandfather’s slaughterhouse and the various methods used to kill the cattle. Much like Sally encounters a distorted version of her grandfather, Franklin meets a dark mirror of himself (in the form of the Hitchhiker). The stranger is a worse version of Franklin insofar as enjoying grave robbing and killing as well as the sordid details of slaughterhouse kills.

After this encounter, Franklin naturally gets spooked. He’s also paranoid that either the Hitchhiker (Edwin Neal) left a sign or perhaps might be following the group. In some ways, Sally is dismissive of Franklin’s feelings on the matter. Part of this gives rise to a conflict that the siblings have about looking for their friend after dark. Because Franklin knows about his family’s slaughterhouse and the encounter with the stranger, he’s reluctant to search. This contrasts with Sally, who’s dogged in her determination to find Jerry (Allen Dansiger). Sally’s dismissal of her brother leads to a cruel twist of fate that changes her forever.

The final scene involving Sally fleeing away from Leatherface (Gunnar Hansen) is indelible. It truly illustrates the effect this entire ordeal has had on the character. There’s no Laurie Strode-esque comeuppance or light relief. Instead, for the first time in her life, Sally Hardesty has truly stared at the mirror of her family roots, and much like a Lovecraftian protagonist has succumbed to madness from the knowledge of it.