As part of their Netflix and Chills lineup, Netflix kicked off Halloween month with their original horror-comedy Vampires vs. The Bronx on October 2. It was directed by Osmany Rodriguez, and it stars Jaden Michael, Gregory Diaz IV, and Gerald W. Jones III. It’s about a neighborhood in the Bronx that’s besieged by vampires under the pretext of a real estate company buying up property, and the only ones who know about the threat are a group of kids who learned everything they know about the undead from movies and comic books.

This movie is an entertaining romp in the vein of films like The Monster Squad and Attack the Block, but it’s more than just a fun way to spend an hour and a half. It has an important and timely message as well. The vampires want to move to the Bronx because they think it will allow them to keep a low profile and stay safe. They don’t think anybody will miss the poor Black and Hispanic residents of the inner city who they will have to kill for food, but the movie tells us in no uncertain terms that they’re wrong. The lives of the poor and of racial minorities are just as valuable as those of rich white people or anybody else, and the vampires learn that the hard way.

In line with that theme, the best thing about Vampires vs. The Bronx is hands down the human characters. The movie conveys its message in large part simply by letting us see how great normal human life can be. It feels really authentic, almost like the film crew just went into the Bronx and started following real-life residents as they went about their business, and it’s a pleasure to watch. The characters all interact in really amusing ways, and many of them have unique traits that make them feel like real people. You grow to care about the residents of this neighborhood very quickly, so you can’t help but root for them when they come face to face with their vampiric foes.

In particular, the best characters in the movie are undoubtedly the main trio of kids: Miguel (Jaden Michael), Luis (Gregory Diaz IV), and Bobby (Gerald W. Jones III). The child actors have amazing chemistry together, so they’re totally convincing as a tight-knit crew who’ve been friends for several years. They’re funny and likable, so basically, anytime these kids are onscreen, you know you’re going to have a good time watching them. 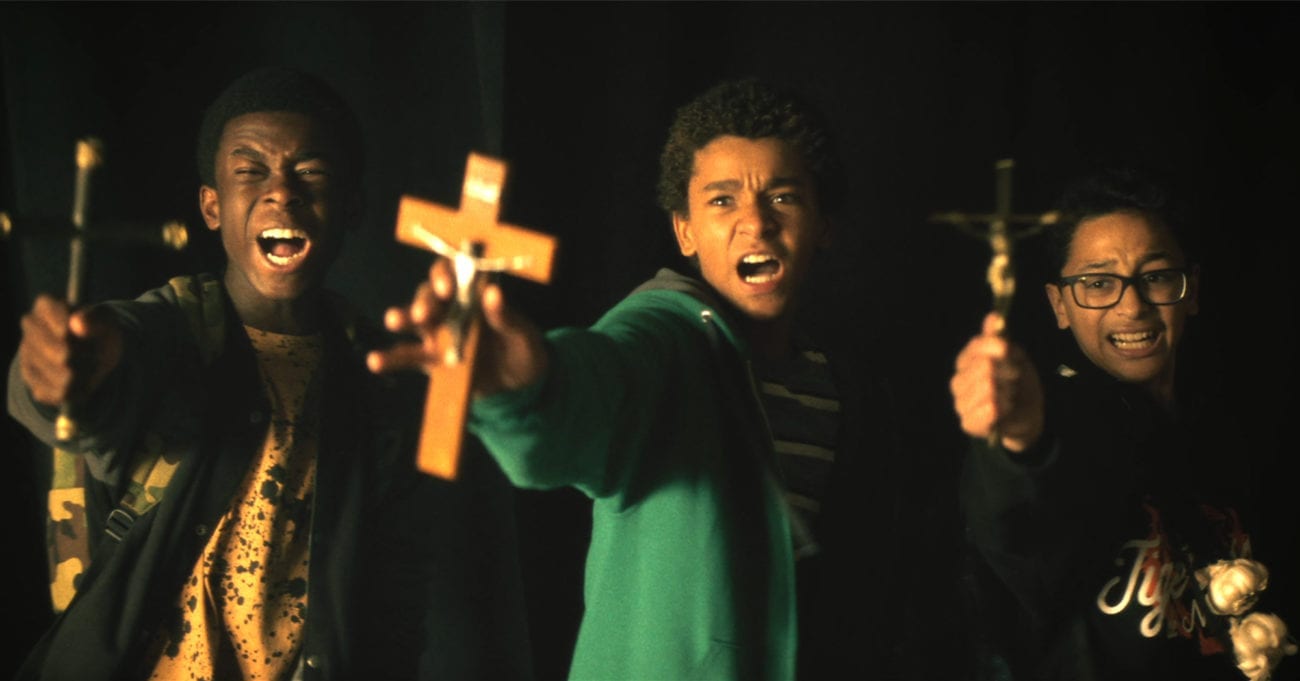 In addition to the human characters, this film also boasts some pretty cool vampires. They can be deceptively charming when they want to be, but when it comes time to show their fangs, they’re as menacing as any bloodsuckers this side of 30 Days of Night.

All that being said, the movie isn’t perfect. My one issue with it is that it doesn’t add anything new to cinematic vampire lore. One of my favorite things about vampires is that they give storytellers a lot of leeway to create their own unique mythology, but the mythology in this film is basically just a patchwork of elements from other movies like Blade and The Lost Boys. There’s nothing here that we haven’t seen multiple times before.

But that’s just a minor flaw, so if you’re looking for some good new horror to watch this Halloween season, I’d definitely recommend Vampires vs. The Bronx. It has really likable human characters that anchor both the horror and the comedy, and their vampiric foes get the job done on their side as well. It’s a heartwarming story about the value of human life, especially the lives of the poor and the disadvantaged, so it’s both timely and entertaining, a combination that’s pretty hard to beat.