There’s very little we know about the universe Matthew M. Bartlett has created outside of his writings. But we do know that it began in darkness. And then, inexplicably, there was light. A nauseatingly green, infected light spitting out unformed static. Finally, a voice reached out over the chaos and spoke with a deformed lisp: You’re listening to WXXT, the malady in the valley.

From the very beginning of Gateways to Abomination we realize that Matthew Bartlett is not just writing stories, he’s crafting worlds, building a city-sized, pocket-universe brick by bloody brick. And he does it with the confidence and detail often associated with Barker or Lovecraft, as if the Town of Leeds and its monsters, its street, its witch-coven were already there waiting for him to pull back a sheet that was a flap of skin. A mythos that began as internet writings led to a self-published book that has flowered into multiple editions, reprints, and special editions, along with a host of new tales, some self-published, some in magazines, and some issued by independent presses.

When I first ordered Gateways on a whim and began to read it, I couldn’t believe just how good it was. It felt like I had discovered something brand new. I was decently well versed in horror and I’d never heard of him. Surely this was a writer that deserved the biggest platform possible and had been unfairly overlooked. I was right, in that he does merit as much exposure as possible, but wrong in thinking he had been overlooked. Harper Collins or St. Martin hasn’t come calling (yet) but in the world of horror specialty presses and magazines, in the fandom, people are beginning to talk. Others before me have floated his name with Ligotti, Barker, Lovecraft, or Klein, and Bartlett’s work is more than able to bear the comparison. But I still want to give a brief introduction to the man and his work, with the hope that you’ll seek out his books and read them, I want to make sure I do my part to broadcast the word and the world of Leeds as far as I can. 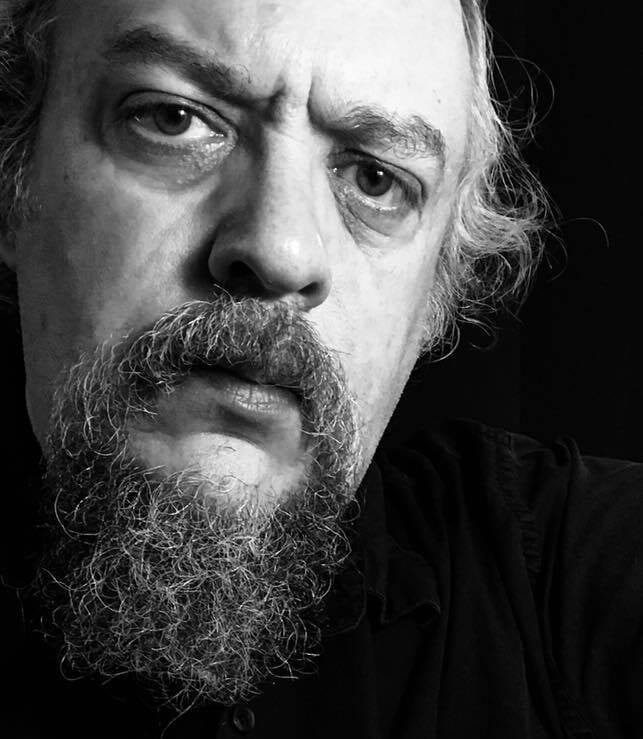 Matthew Bartlett has been writing his whole life, ever since he read Night Shift by Stephen King in 1983 when he was thirteen years old. I’d bet many horror writers born in the ’70s and ’80s have a similar tale, though not many could have a grandmother awesome enough to give us those paperback treasures like Bartlett did. A Connecticut native, horror, and his home turf were intertwined long before he knew the literary history of the area. His Halloweens were New England Halloweens. Salem was around the bend. Kind was just up the lane. He never questioned the association and refers to himself as “terribly provincial” about the whole thing.

As he tells it, he struggled with writing through his twenties to the English program at Central Connecticut State University where he began writing poetry. An “abiding interest in horror fiction” turned, in his thirties, into a LiveJournal page that formed the basis of the Leeds cycle. The posts were short, concise pieces that dealt with a witch coven out of Western Massachusetts using radio waves to spread its influence. In other words, Leeds and its habitués emerged surprisingly developed from the very beginning, they were there, waiting for Bartlett to find them in the dark.

Something I can confirm from writing this article is that Matthew Bartlett is generous with his time and his encouragement. Given the claustrophobic dread oozing through his work, he is open to discussion about his work and progress, evidenced by his thoughtful answers to my numerous questions which I’ve included in full below. His Blogger page says it all, with a tab labeled “About Me (with contact info).” His publishing history is reflective of this willingness to engage. He has a long working history with the illustrator, Yves Tourigny. A special edition of Gateways to Abomination is set to be released by Nightscape Press in a package that also includes Jon Padgett’s Secret of Ventriloquism and a third collaborative hardcover containing stories by both. He also is adventurous in his choice of formats. His Music of the Moldering, with Tourigny, is reminiscent of King’s Cycle of the Werewolf, not quite graphic novel, not quite book format, but an engaging work that brings the best of both to the table. Farther afield, he has helped produce a recording called “WXXT: The Overnight Sessions,” alleged to be a copy of a bootleg cassette found in a record shop, it contains readings of Bartlett’s stories also assembled and illustrated by Tourigny.

You are listening to WXXT, the chuckle in the churchyard on a cloudless midnight.

Gateways to Abomination (2014) – True to its name, it was my entry point to Bartlett’s work, as it was for many. It is Leeds and WXXT in its most potent form and it’s safe to say that his other works spiral out from here. Every element or theme that makes his writing his is represented here: the witch cult, the radio station WXXT, the walking dead, body horror, leeches, Ben Stockton, Anne Gare, and her occult bookstore. Each of these vignettes/short stories/aphorisms contains seeds of the world he’s creating, the gateways of the title. 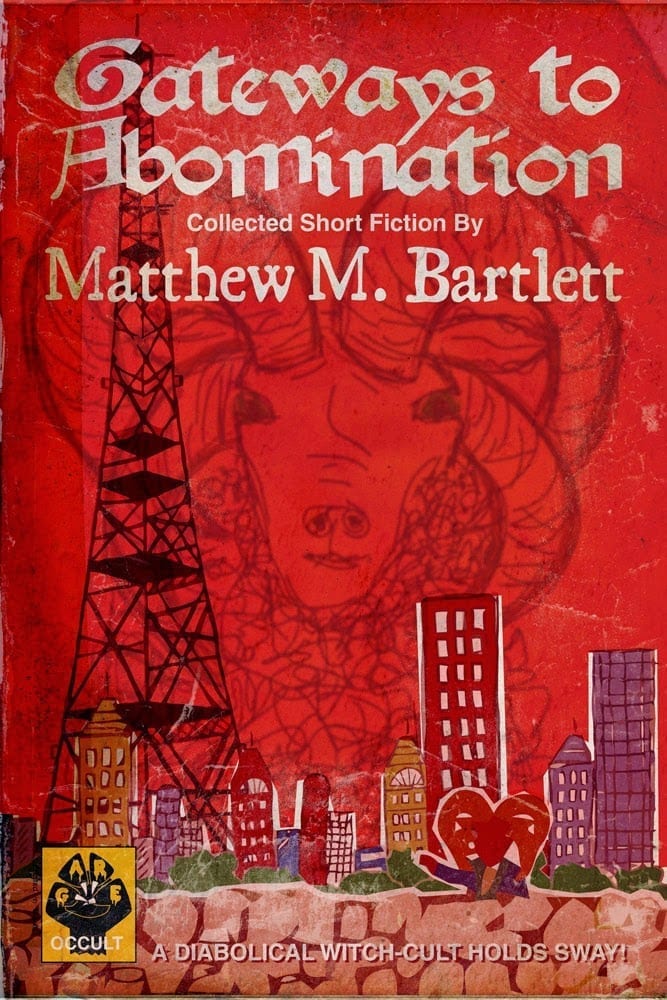 Creeping Waves (2016) –  A sequel of sorts to Gateways. Waves asks the ultimate question in Bartlett’s universe: What is the “real Leeds? Is it a physical place, marked on a map? Is it the darkened woods around the town? Is it the carnival of black tents set up in the woods around the city? Is it inside the flayed corpse of a sacrificial victim, under a red, carrion sky? For all its grotesqueness, it also drives home the black humor that runs through all of Bartlett’s writing. He writes in run-on sentences packed with alliterative descriptions that only get funnier as they go, like some sort of graveyard Tom Robbins. We also begin to get a sense of the programming available on WXXT, segments like “Uncle Red Reads Today’s News,” “Have You Seen This Man,” or “The Leeds Word Around Town.

Dead Air (2016) – If Creeping Waves acts as a sequel, then Dead Air functions as a prequel to Gateways. We get some of the very early incarnations of the Leeds stories, including some poetry and a glimpse of Matthew Bartlett himself falling victim to Leeds. The 2016 version states that it is a reprint of unpublished material from the original Dead Air in 2009. I haven’t been able to get a copy of this version, but the current incarnation provides valuable insights into the beginnings and development of WXXT.

This is WXXT, radio for the spiritually weary. Up next, the latest tune by Michael McDonald. And don’t forget to join us at midnight for Chants and Rants, our latest field recordings of monks gone hopelessly and irretrievably mad.

The Witch-Cult in Western Massachusetts Vol. 1 (2015) – Short stories masquerading as capsule biographies of Leeds luminaries with illustrations by Alex Finemann. Here we get the origin stories of dark luminaries like Abrican Geist, Anne Gare, Benjamin Scratch Stockton, and 10 other black lights of the local coven scene. More a booklet than a book, it’s material like this that gives Bartlett’s world the weight of comparative story cycles like the Cthulhu mythos. It lets you see that Bartlett has seen and recorded every dank corner, every viscera-choked hole in this town and is prepared to lay it all before us. 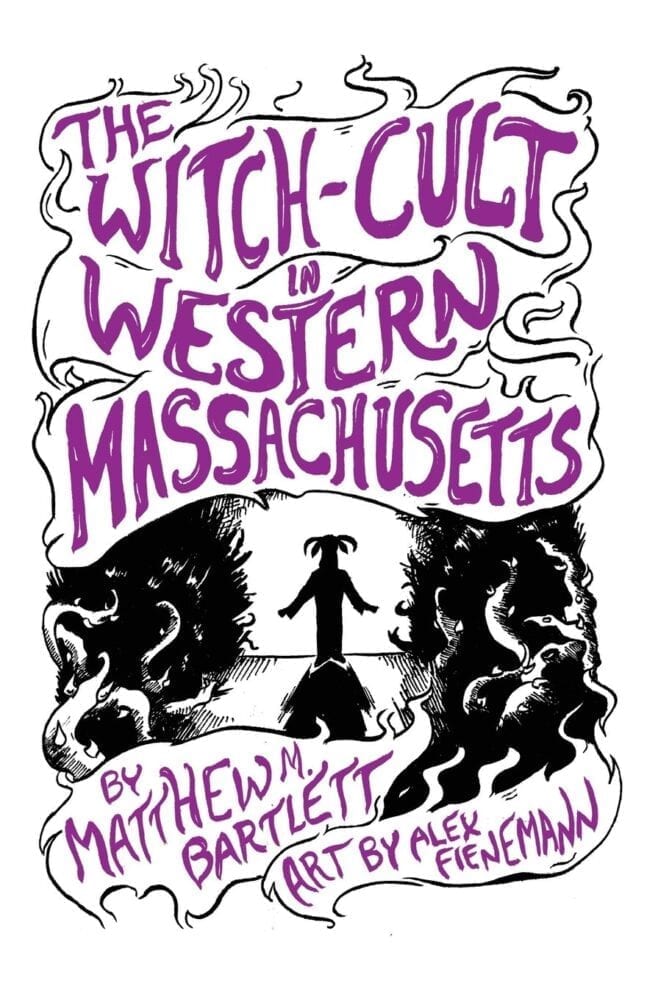 Anne Gare’s Rare Book and Ephemera Catalogue (2015) – This stapled chapbook is my absolute favorite piece of Bartlettiana. Several pieces from the catalog are featured throughout Creeping Waves and Bartlett has finished the job by hand-producing the complete catalog. Featuring samples like “The Dither Family Cookbook,” notable only for the handwritten notations that seem to document the mental breakdown of the owner. Or, “The Stockton Pamphlets,” printed in 1720 in Leeds, which feature crude drawings of winged leeches and what can only be described as a home radio receiver. Of note, “Me and Your Shadow,” a Stephen King story that exists in only two known copies and never released on the internet—the copy advertised is signed in invisible ink, is in fine condition, and can be yours for one million American. 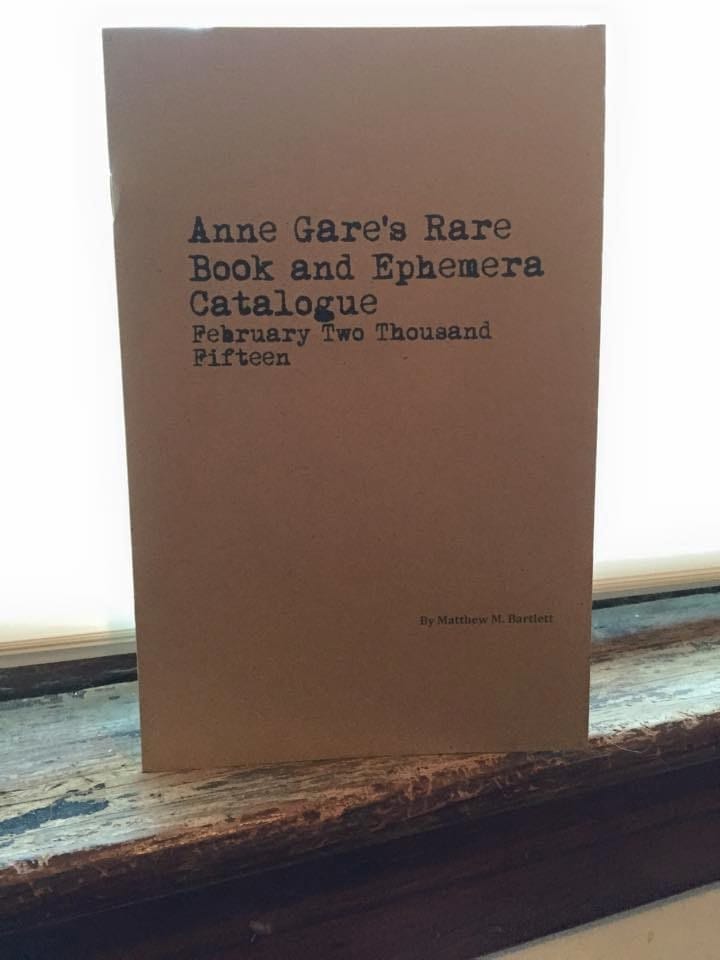 You’re listening to WXXT, the malady in the valley, the voice of unreason, the cadaver in the crawlspace, the pox in the fruit punch, the nunchakus in the nave, the pestilence in the pews, the carrion in the catechism, the body, the blood, the baseball bats and blasphemies, the bigotry and blast caps; the bloodbaths, boondoggles, and broken backs. You’re listening to Nicholas Ripsternum and this is Free-range Fungus Friday; if you’re the third caller, you can be the proud owner of seventeen pounds of tainted ground chuck if you can just provide an answer to the following question: just what is that lump below your right ear?

OUTSIDE THE CITY LIMITS

The Stay Awake Men and other Unstable Entities (2016) – Not everything Bartlett has written takes place in the town of Leeds. This collection of seven stories are mostly stand-alone but also stand-outs in his production. It’s nice to know that he can bring the same sure style and horrific grotesquery to any situation about which he puts pen to paper. There are indeed familiar situations like a radio DJ going mad in the booth or a fortune teller that works to open doorways in cuts of meat, but for the most part, these stories introduce us to new corners of the world where Bartlett’s particular brand of horror holds sway.

Of Doomful Portent: An Advent Calendar of Grotesque Horrors (2018) – The Christmas special in the churchyard, this is one of my favorite collections and my forever mood for the holidays. Brief twisted vignettes, not necessarily Christmas themed, but featuring new toys like Hurt Me Henry action figures, and when a story is called “The Ash Eaters,” well, that urn of Pop’s ashes on the mantle is just not safe.

Lost Signals (2016) – Unbeknownst to me, this was my first exposure to Barlett. A collection of stories by many authors, every horror story here revolves around radio signals. I was blown away when I read it and its sequel Lost Films (take a guess). Not only does it feature two stories by Bartlett, the only author to have multiple stories, but it also bears testament to the power that radio has to evoke fear and loneliness, and perfectly illustrates the reason creations like WXXT are so lasting even as technology leaves old-fashion radio behind. 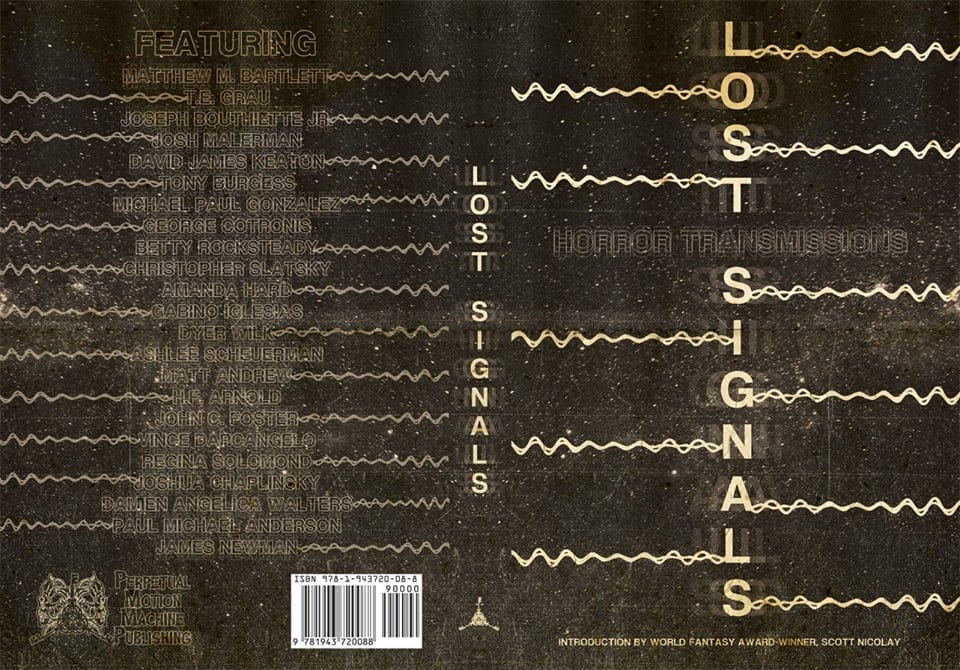