Raise your hands if you’re afraid of spiders? You can’t see me, but both of my hands shot immediately into the air. Arachnophobia is one of, if not the most common phobias out there. Knowing that this fear is common does nothing to ease my concerns when it comes to those eight-legged arachnids. I know they mean no harm and are more scared of humans than we should be of them; there’s just something about them that sets my nerves on edge and stirs the hair on the back of my neck.

With such fear being so commonplace, it was only a matter of time before that phobia was exploited by Hollywood. Such was the case on July 18, 1990, when the aptly-named Arachnophobia hit cinemas. The movie stars Jeff Daniels and Harley Jane Kozak as Ross and Molly Jennings, a married couple who move to the country with their children. Ross is a doctor and sets up a practice within the small town of Canaima, California.

Around the same time, a Venezuelan spider makes its way into town and mates with a house spider. The mutated offspring begin to make their way among the townsfolk and wreak havoc, killing off the residents one-by-one. As the body count begins to rise, Ross teams up with Dr. Atherton (Julian Sands) and a local exterminator (John Goodman) to stop the carnage and save as many lives as possible. 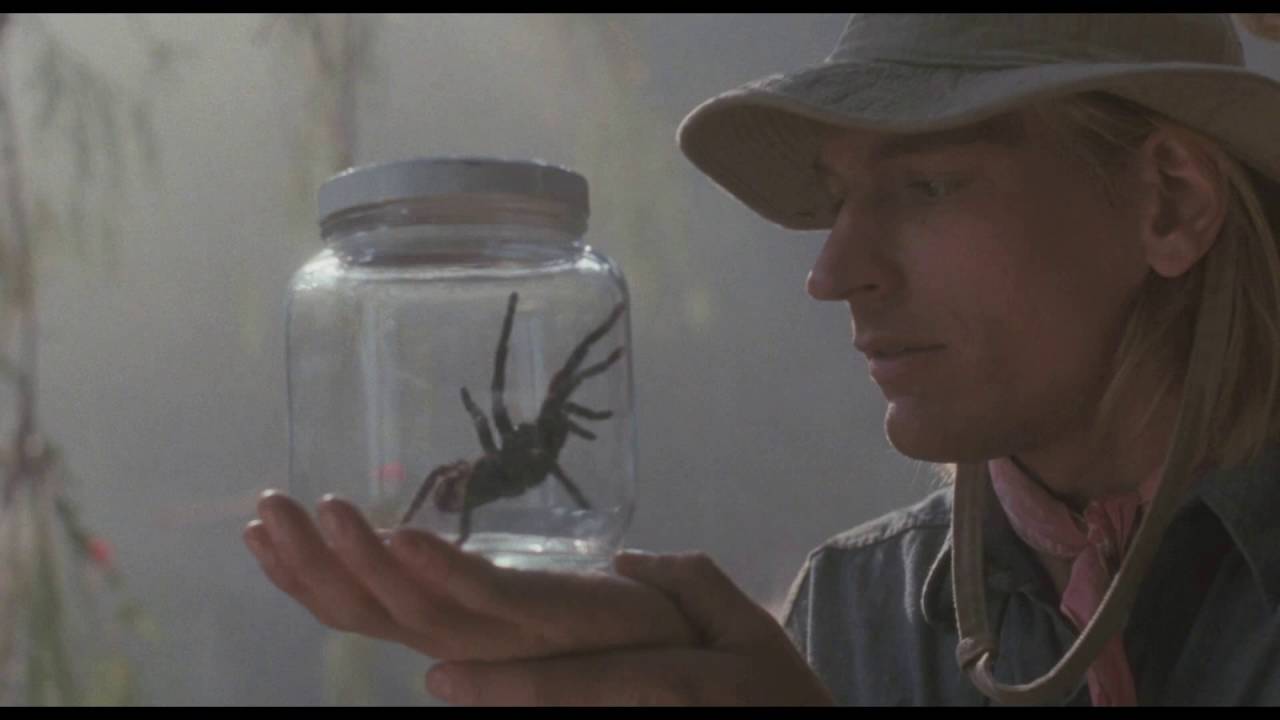 Co-written by future Batman Returns scribe, Wesley Strick, and executive produced by Steven Spielberg, Arachnophobia walks a fine line between horrific creature-feature and all-out comedy. This tightrope the movie balances throughout its 110-minute run time is even more impressive when you realize that Arachnophobia was director Frank Marshall’s film debut.

Unsure of how to market the film, some promotional material leaned heavily into the comedy element, while others veered toward the thriller/horror component. Eventually, it was settled to market the film as a “thrill-omedy,” which I feel is the best decision. There is certainly an abundance of comedic moments across the film, but there are also plenty of moments where you want to cover your eyes. Spider in the shower? Check! Spider in dark places? Double-check! Spider in your popcorn? Ahhh! Check! Check! Check! Yuck! Yuck! Double yuck!

And this is what makes Arachnophobia such a delight to watch. The thriller aspects never go to gross-out, R-rated extremes. Frank Marshall wanted to take the audience on a roller coaster of thrills and chills while making sure they had a good time. Yes, if you are afraid of spiders, some moments will have you gnawing on your fingertips while the next moment you will be laughing at the characters and situations. What makes the film work so well has to do with the use of real spiders for many scenes. Excluding a few scenes, all other spider scenes are the real deal. Back before CGI was rampant, Arachnophobia did it the old-fashioned way, and the film is better for it. When a spider lands on Jeff Daniels’ face, you feel his terror. 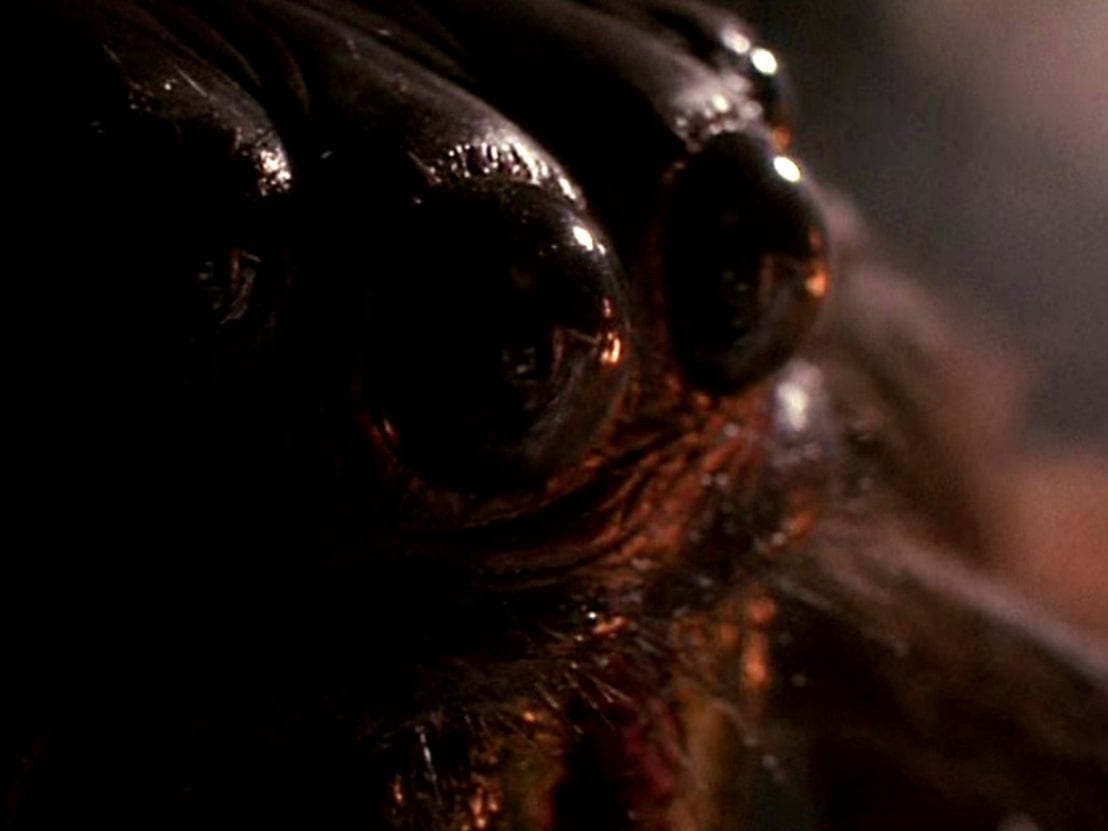 Frank Marshall directs a supremely confident film. Arachnophobia is a delicate, high-wire act of trying to balance science, scares, and smiles. Screenwriters, Don Jakoby and Wesley Strick, know how to exploit the audience’s apprehensions, yet know when to give the audience that moment to calm their nerves. Along with a sure-handed director and a game, capable cast, this movie hits the ground running and never lets off the gas.

Speaking of the cast, Jeff Daniels capably anchors the film with a good mixture of likability, vulnerability, and charm. When other actors arrive and threaten to hijack the movie from Ross, Daniels holds serve with his affable personality. When the inevitable third-act set piece arrives, Ross does not turn in to a spider-killing Rambo. You see the fear on his face and in his actions. He alone has to confront his fear head-on, descending into the spider’s lair for a one-on-one match up with the spider queen.

While all of the cast does an admirable job, the one standout, good or bad, is that of John Goodman’s Delbert. Though not in the film as much as would be expected from the marketing, John Goodman provides a bulk of the film’s humor. Delbert feels like he walked in from a different movie. Drawn very broadly and cartoonish, this character almost ruins the film. Goodman’s Delbert almost feels like a character from another movie. Thankfully, the movie uses him sparingly, so the audience is not over saturated by this character’s eccentricities. 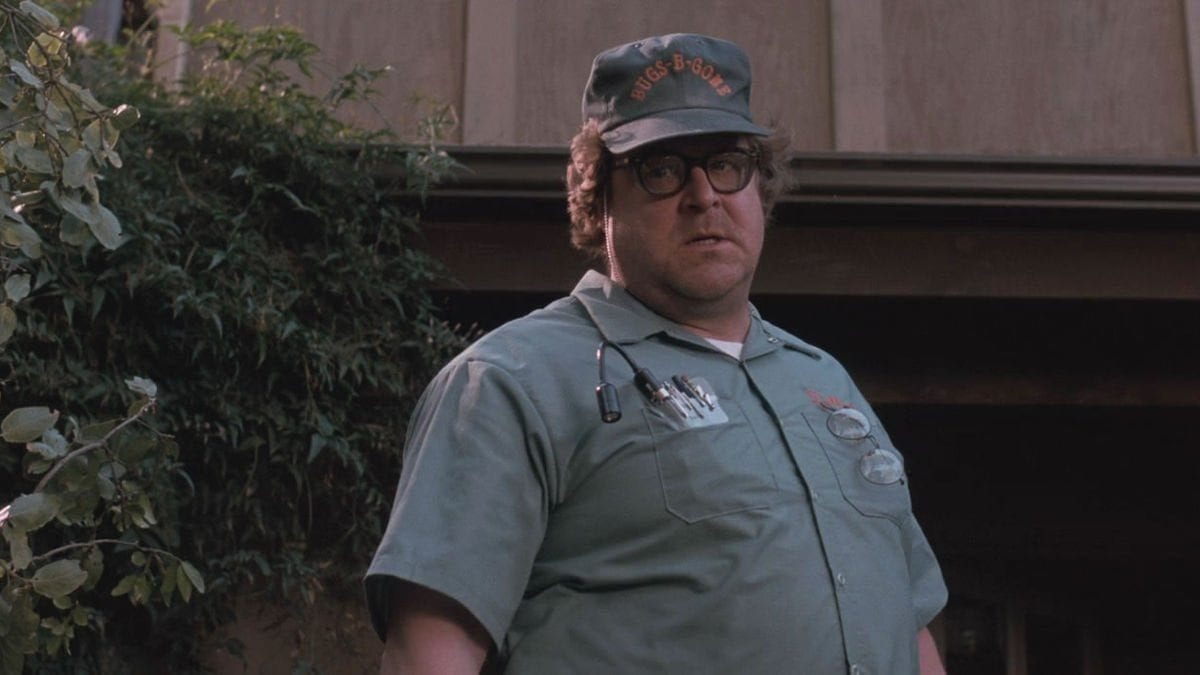 Arachnophobia is a certain type of film that Hollywood no longer makes. A mid-budget (at the time) film with a simple idea that is not concerned with setting up sequels, spin-offs, and world-building. Like Tremors, released earlier in the year, this film wants the audience to care about the characters, have a good time, and leave the movie smiling. Arachnophobia delivers on all of those. In a time when Hollywood releases nothing but high-priced tent poles and cinematic universes, Arachnophobia is a throwback to a simpler time.

Though overshadowed by blockbusters Die Hard 2 and Ghost during the summer movie season, Arachnophobia found enough of an audience and became a moderate success. Upon subsequent releases for home viewing, the small theatrical audience grew in stature. So, 30 years on, I still enjoy Arachnophobia as much as I did when I was a kid. And yes, during certain parts of the film, the hair on the back of my neck still stood tall.