The Beach House is the debut from writer-director Jeffrey A. Brown, and if early Polanski mixed with George A. Romero is the type of thing that might get your horror interests percolating then this is the movie for you.

Add in a timely plot about an airborne deadly virus and you have an added element of scares and potency that is perfect for quarantine times. Not to mention, there are gorgeous shots, appealing characters, and a spirit of simple horror that hearkens back to the original Texas Chainsaw Massacre.

The Beach House begins simply enough. A college-age couple, Emily (a wonderfully believable Liana Liberato) and her boyfriend Randall (Noah Le Gros) arrive at his father’s secluded beach house to try to work out some relationship issues. She’s a science student, and he has dropped out to aimlessly explore his life options. They have the entire beach house and area to themselves—or, so they believe.

When Emily is alone in the bathroom she notices a weekly pill dispenser on the edge of the sink and the medicine cabinet is stocked full of freshly filled prescriptions. She quickly realizes that they are not alone as an older woman, Jane Turner (Maryanne Nagel), enters the beach house and makes herself at home. Spooked, Emily runs to Randall who tells him someone is there in the house with them. They confront the strange woman who then is joined by her husband, Mitch (Jake Weber). 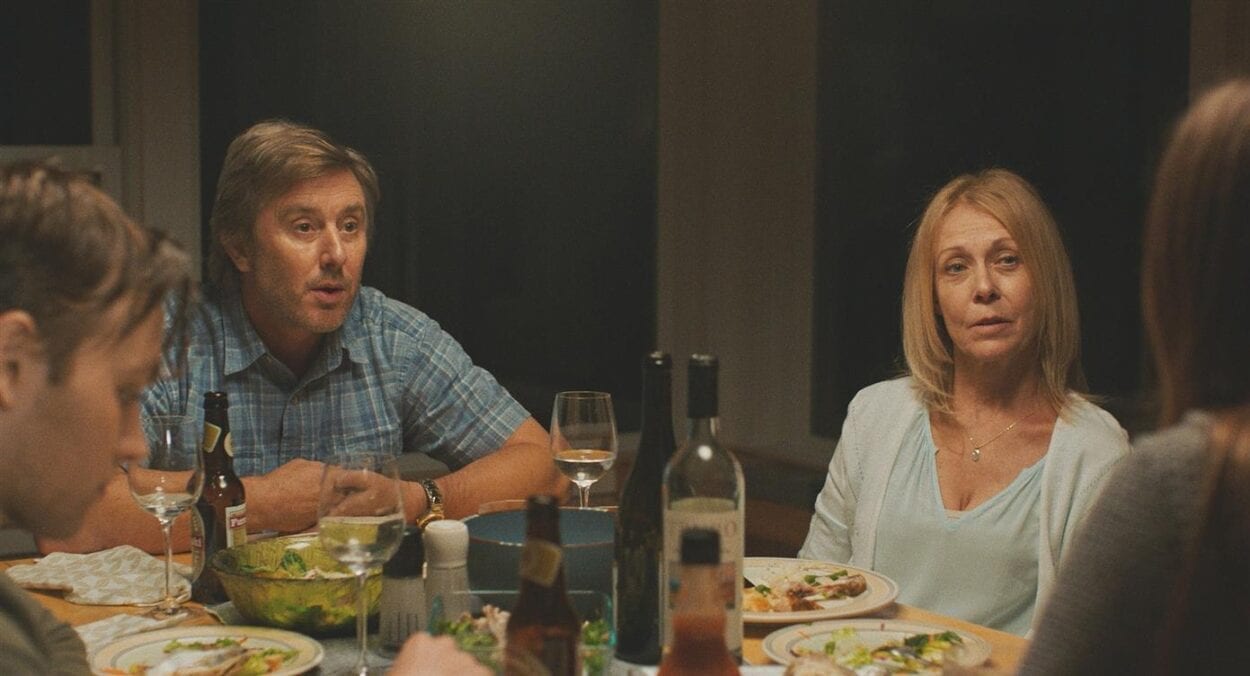 It turns out the older couple are friends of Randall’s father and there was a mix-up in accommodations. The younger couple offers to leave but not before Mitch and Jane invite them to stay for dinner to which they reluctantly agree.

It’s a nice set up which is reminiscent of early Roman Polanski works such as Cul-de-sac. A secluded beach property where unexpected guests show up without providing any real explanation. We know something is off about this couple right away but their story is certainly believable enough. There’s a great sense of enclosed Polanskian atmosphere demonstrated visually including some clever framing between the on-screen participants.

During dinner, the conversation becomes tense as Randall attempts to justify his decision for leaving college. As the evening moves on, some wine and chocolate pot bars are brought out and shared among the guests. Whenever hallucinogenic substances are consumed in movies like this, things tend to veer toward the weird and creepy and The Beach House certainly provides those moments. Jane especially reacts strongly to the illicit substances as does Randall while Emily and Mitch inspect something odd floating about in the air and trees outside.

The next afternoon proves to be just as creepy as Mitch joins Emily who’s sitting down at the beach. Emily, now wearing a white long-sleeved shirt, sits on the equally white sandy beach looking out at the ocean which is as blue as Randall’s t-shirt. Possibly still feeling weird from the contents of the drugs he ingested the night before, Mitch walks into the water in front of Emily’s view, so far into the tide that he simply vanishes under the waves as a frightened and unnerved Emily helplessly watches and screams out to him once he’s fully submerged. 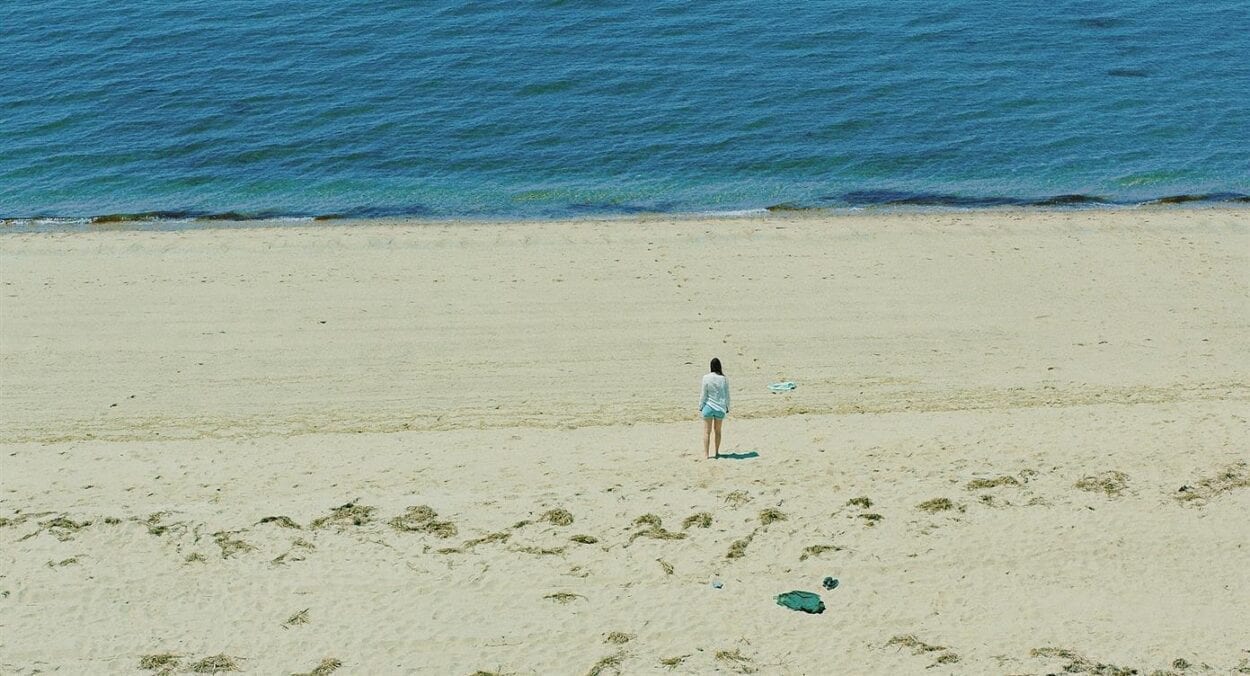 Emily realizes strange creatures have just appeared onshore, and she finds herself stepping in a large pile of slimy creature goo that looks like a mixture of Ramen noodles and apple pie filling. Whatever is in this oozing mess it unleashes a worm-like creature inside her foot. At this point, The Beach House has veered from Polanski territory to Creepshow with some nice camera shots sprinkled throughout the rest of the movie which sees Emily and Randall attempting to survive this small town where an airborne virus has made things deadly for all the area’s citizens.

The Beach House joins past horror/thrillers movies that feature a very small cast. Think all the way back to Polanski’s Repulsion or to David Koepp’s just-released chiller You Should Have Left. Often the more intimate a story like this is, the more surprising the shocks are later on. The Beach House boasts a splendid cast from Weber (Meet Joe Black), and relative newcomers Le Gros, and especially Liana Liberato. She’s a terrific final girl that earns comparisons to Scream‘s Sydney Prescott. There are a number of layers in her role ranging from a girl who begins by just wanting to save her relationship to trying to save their lives by film’s end. 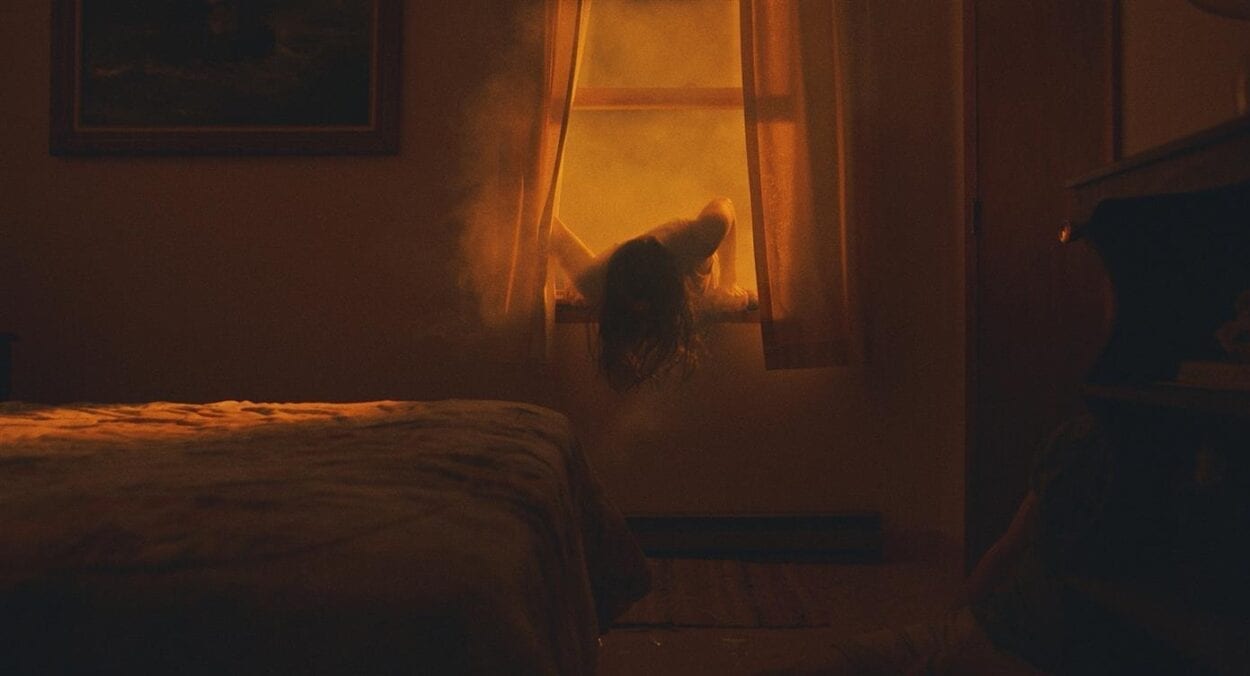 Writer-director Jeffrey A. Brown keeps the story moving with his two compelling young leads, a capable restrained performance from Weber (in movies like this you’d expect this type of character to ooze creepiness from the very first line), and his visual sense. I know it’s an extremely high comparison but I haven’t seen a beach this washed out on film since Jaws and there are shots of the actual beach house which are reminiscent of the Bates Motel if the Bates Motel overlooked a barren beach that the sun sets behind each evening.

The Beach House is a nifty, surprising, and compact chiller with its horror spirit on tremendous display.

The Beach House is available to stream on Shudder starting July 9.