For her first feature film, writer/director Stewart Thorndike made a film that only just reaches the “feature-length” mark.  At just 65 minutes long, Lyle is an ambitious, tense, Rosemary’s Baby-inspired horror that delivers far more than you would expect in its short run-time.

The film opens with stay-at-home mum Leah (Gaby Hoffmann) and record producer June (Ingrid Jungermann) checking out a spacious two-bedroom apartment in a Brooklyn brownstone, with the landlady, Karen (Rebecca Street). Refreshingly, the film doesn’t make an issue out of the same-sex relationship; it just simply is. When Karen notices Leah’s small bump, she shares that she—who appears to be in her 60s—is trying to get pregnant. Leah can’t believe their luck—the house is far better than what she thought they could afford—and in her eagerness, she tells Karen that she’s pregnant for the second time with another girl (the first being their toddler daughter Lyle), something she hadn’t even told June yet. Strangely, June absorbs the news stone-faced, and grimly says they’ll take the apartment.

Meanwhile, Lyle has a tendency to run off, as toddlers do—and, once the couple moves in, she starts talking to invisible people, also as toddlers do as they are finding their voice. But this feels strange to Leah, who has a growing unease with the place, and this builds a horrible sense of foreboding for us, the viewer. With June’s career on the up, Leah is there alone with Lyle a lot and possibly shows signs of Postpartum depression, though it would be tough for anyone being pregnant with a busy toddler and a new house to decorate and make a home. Within a week or so of moving in, Leah Skypes with a male friend and shares her feelings that she and June seem to be growing distant.

Knowing that a child would die in this film, I watched with dread, ready to grab a cushion to put over my face. But the way Thorndike plays out the tragedy is devastating without showing a thing, thanks to the clever use of Skype, buffering, and the most minimal off-screen implications of sheer horror. While Leah is talking, we see little Lyle running around behind her until she wanders off-screen, and so we only hear the guttural screams as Leah discovers that her daughter has fallen from an open window to her death. It truly is heartwrenching. We may have only seen Lyle for a few minutes of screen-time, but she was such a cute little thing, and Leah was so devoted to her.

From there, the film follows a narrative shrewdly similar to Rosemary’s Baby—as Leah’s pregnancy progresses, she becomes increasingly paranoid that someone is trying to harm her unborn baby, though she can’t explain why. She suspects that Karen, the peculiar landlady who now inexplicably claims to be pregnant and sports a bump that could easily be six months gestation, is behind the plot. Later on, Karen even pretends to call out to her non-existent husband (I’m guessing he couldn’t take much more and left), telling him that she can’t go out as her nipples are leaking. Leah catches her and is disturbed by the behaviour, further fuelling her neurosis and mistrust of her.

However, Lyle deviates from Rosemary’s Baby in subtle ways. Although June is frustratingly similar to Rosemary’s husband in her disregard for Leah’s concerns—she’s too busy with her thriving career to worry about Leah’s spiralling mental health—the playing field is a bit more level this time around. The couple sees a grief counsellor together, and when the therapist suggests that Leah take medication to alleviate her anxiety, the couple present a united front and decline. The refusal is accepted and taken without argument by the (also female) therapist, who is willing to explore different avenues. But Leah has a kind of grief bubbling just below the surface, masked by smiles and small talk, faking her way through grief counselling to convince her partner—and herself—that she is doing okay.

This is in stark contrast to the patriarchal manner everyone in Rosemary’s life treats her. When Rosemary complains of pain during pregnancy, her husband insists she sees (against her wishes) a doctor who brushes off her concerns, without providing an explanation or any care. When Rosemary finally voices her fears to another doctor, he calls her husband and threatens to put her in a mental institution, the spectre of “hysteria” looming tall. Although things have not changed entirely, Leah’s distress is not so readily disregarded except perhaps by June. Other people in Leah’s life are at least willing to listen and discuss her fears, a habit totally absent from Rosemary’s world.

There are two sides to the horror of this story, and it remains ambiguous at the end as to whether there was something inherently evil about the building that was rife with inexplicable noises and reappearing objects. With the majority of the film shot in broad daylight, it perhaps shouldn’t feel as creepy as it does. But for me at least, it was spookier because of it. The apartment was very similar to one I lived in many years ago. An old house, where things went bump in the day very often and candles were often found flung across the room without explanation, just minutes after I’d put them back in their place. I could feel Leah’s anguish in that house. The way the sun shone too brightly through the window, highlighting streams of dust in the air. So empty. It makes my stomach churn just thinking about it.

While watching, we ask ourselves, what is to be believed? Is the house really cursed? Or is it all in Leah’s imagination? I think it is fairly common that if you want to believe something supernatural is happening, you can find some way of ‘proving’ it, despite there being a logical explanation. Karen, the landlady, had told Leah that no other children had lived in the house, so when Leah started researching the history of the house, she became convinced that Karen had intentionally killed Lyle and had been breaking into their apartment through the window. For there had been two boys who lived in the property previously—both of them died.

However, and it is important to note, that one of the boys did not die at the house. Leah also noticed that the working parent (in these cases two fathers and in her case, June), had each become monetarily successful in their line of work once their children died. This leads Leah to believe that they had made a pact with the devil to become rich and famous in exchange for their firstborn child. It is very subtly done, but anytime anyone gives a logical explanation or asks a question that Leah doesn’t like, she will find another way to convince herself something really is going on and that she’s being gaslighted. She is being gaslighted in some aspects. Certainly by June who is rarely there now, always working late. It is precisely this kind of behaviour that feeds the paranoia. The gaslighter tells you that you are crazy, which you feel like you are because they made you feel that way.

Facts don’t add up, suspicions get explained away, red herrings abound—coupled with Leah’s unreliability as a narrator and propensity for overreaction, these elements provide a series of twists and turns that make it difficult to figure out what exactly the truth is. It creates a particularly effective mood, assisted by a creepy piano-based score.

What I really loved about this film is that Thorndike and her heavily female crew and nearly entirely female cast for Lyle capture a lived-in, natural relationship between Leah and June with a complete lack of objectification. Their relationship is neither for the male gaze nor for any gaze. It just is. Their distance, their comfort, even the one suggestion of sex between them, is natural in a way a relationship between women onscreen is rarely if ever shown, certainly not when a film is helmed by a male filmmaker, no matter how well-intentioned. Also, this may be the first film I’ve ever seen about pregnancy that lacks any body horror or a traumatic and brutal birthing scene. In fact, the scene in which Leah gives birth turns that trope on its head, becoming one of the best film climaxes I’ve seen in years.

While the whole cast shines—from Jungermann’s detached darkness to Street’s delicious weirdness—this is Hoffmann’s movie, and she is spectacular in it. Her eyes convey the deepest depths of parental pain and terror. 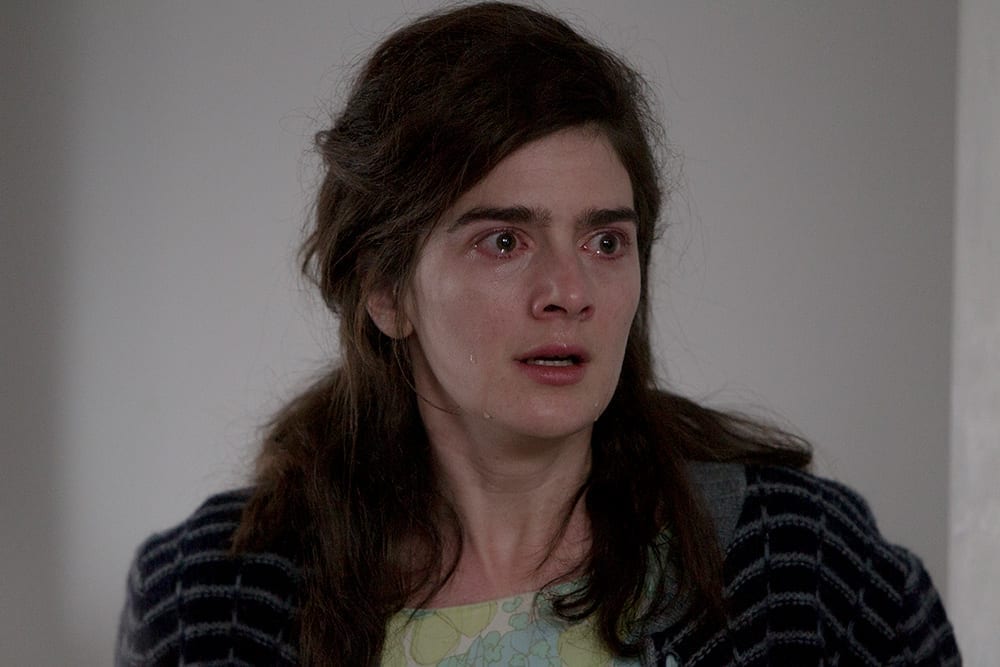 Lyle’s focus is motherhood and postpartum depression, something which is rarely talked about openly, even in today’s modern world of social media. Some people can’t understand it. A woman is ‘supposed’ to love her child, she’s meant to rejoice in her new status as ‘mother’ and revel in the experience, despite having gone through a significant psychological, emotional and physical transformation in just nine short months. Society says motherhood is a blessing, so the mother must be joyful.

Then there is the landlady Karen. She’s symbolic of the pressure women feel, particularly as they get older, to have a child. They internalise this pressure so that it becomes a powder keg of emotion. It becomes more than a desire; it becomes a need. This need can quickly transform itself into a form of psychosis over time, such as an obsessive need to pretend to be pregnant. I know exactly how this feels. While I never became neurotic, five years of trying and failing to conceive plunged me into a deep depression that only a positive pregnancy test cured. I don’t think anyone understands just how much of an emotional rollercoaster trying for a baby is for women when they desperately want to be a mother. Then there is the character of Karen. Despite Leah’s accusations towards her, Karen embraces her, admits the truth about pretending to be pregnant and her sadness about never becoming a mother. By the climax of the film, Karen is the only person who listens to what Leah wants and shows her care and concern—perhaps making her as close to a mother as she’s ever been.