Mick Taylor, Australia’s most prolific serial killer, is at it again in the second season of Wolf Creek on Shudder, but has his trouble been increased by running into another strong female? Season 1 introduced us to American teenager, Eve Thorogood (Lucy Fry), who proved to be a worthy adversary as she chased Mick throughout the Outback in search of revenge for his slaughter of her family.

In Eve, we are given a Whedonesque heroine, a scared, lonely girl who became tired of being hunted and reached insider herself to become the hunter, much like Buffy Summers becoming the reluctant slayer. It was when Eve paired with a police inspector, Sullivan Hill (Dustin Clare), that she found her footing in the search for Mick.

Unlike the Wolf Creek feature films, Season 1 gave us more of a backstory on our killer and his motivation by delving into his childhood and what may or may not have given him his taste for blood. We also were shown how Mick enjoys becoming more involved with his prey, kindling some sort of relationship as he taunts and plays games before going in for the actual kill—a sort of sadistic foreplay if you will.

Season 2 increases the intensity of this relationship-building as it introduces us to a new cast of characters waiting to meet Mick Taylor, once again masterfully brought to life by the acting veteran, John Jarratt. 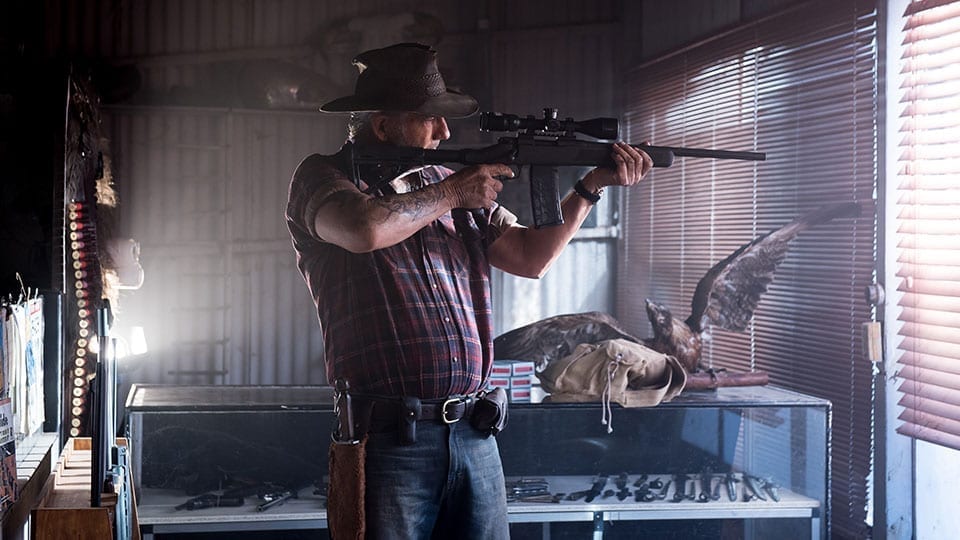 The season opens with Mick finding that he is on the police radar when he stops into a local gun shop and talks with a shop owner, Tommy, in his friendly yet intimidating way. When Tommy questions Mick about the murders in his neighborhood and confirms that the police are looking for the suspect, Mick converts his “friendship” with Tommy into another murder, beginning the Season 2 bloodbath.

Soon we are introduced to a group of international tourists embarking on a guided Outback Safari—all for their own interesting personal reasons which we find out during the course of the first two episodes. As we get to know these characters and their backstories, we are enlightened to the idea that these people may be formidable foes for Mick. Mick’s prey includes a former soldier, a geologist, geneticist, builder, and a forensic psychologist who foreshadows trouble for our unsuspecting murderer. 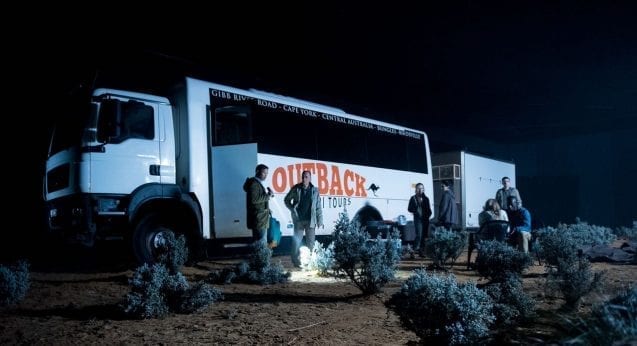 Season 2 brings not only a new motley crew for Mick’s killing pleasure but a new theme song—an unsettling cover of Men At Work’s Land Down Under. Fans will be delighted that the show features the same great writing, editing, direction, unexpected dry humor, and cinematography that made Season 1 so memorable. And let’s not forget the gruesome images; Season 2 does not shy away from those, horror fans.

One example of that exemplary direction comes in Episode 1, “Journey,” when the bus driver/tour guide, Damo (Taylor Wiese), stops at a convenient store for refreshment. Of course, Mick is there to strike up a seemingly friendly conversation, feeling out the bus driver and taking in his new cadre of possible victims. We see his lips moving as he is counting, “13… my lucky number.” The shot shows Mick and Damo in shadow looking out over the group of tourists as if behind glass. The viewer is sitting at the table with Mick and Damo, a part of the conversation, making him/her an accessory to Mick’s plans. 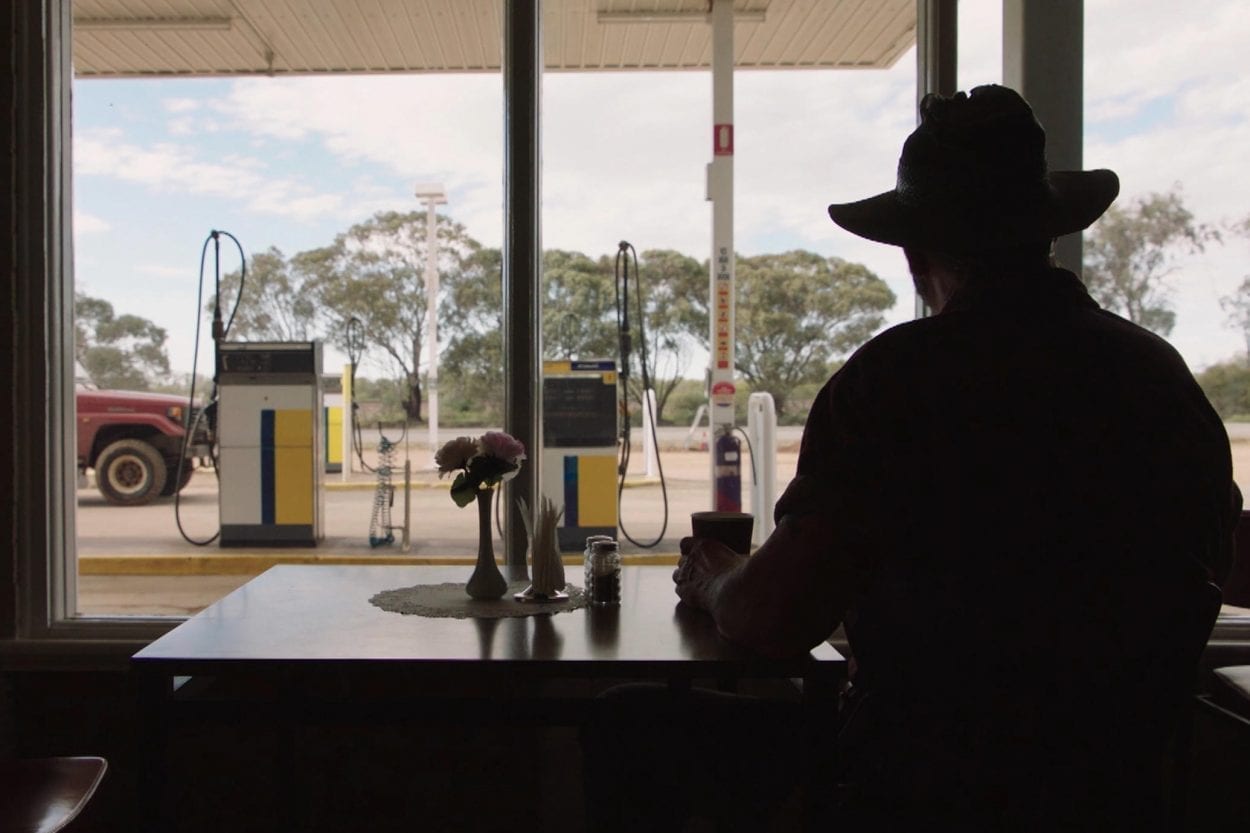 Mick sizes the tourists up, makes a few vulgar comments, as he is known to do, and suggests the bus driver play a joke on them. The driver comments that he needs to gain their trust and that they want the “real Aussie Outback from a real Aussie.” To that, Mick responds by asking where he should apply. The driver laughs this off, offending Mick and giving him his purpose for the season, hunting this busload of tourists.

What makes this scene so intriguing is that the viewer is invited to be a part of Mick’s thought process. We see him taking in his possible victims as if he is picking out a special cut of meat from behind the deli counter. He counts them out as if he’s been issued a challenge—can you take on all 13, Mick? Yet, we are learning things about these victims to which Mick isn’t privy. And we know that he may have more on his hands than he is bargaining for in this lot. Much like Season 1, viewers are invited to be a part of the growth of the victims as much as we are given insight into the killer.

We also get a peek behind the curtain as we see Mick feel slighted by the idea that he wouldn’t be taken seriously as a tour guide. His face changes slightly as Damo laughs off the idea of Mick becoming more than an Outback pig hunter. It is as if Mick believes that Damo is making himself more important or higher on the social ladder than Mick and for this, Damo must make restitution. This is another flashback to what we saw of Mick’s childhood in Season 1 in which his fire to become a killer was ignited when his father talked down to him and made him feel less than human.

The first episodes have all the ingredients reminiscent of classic horror: individuals pairing off in the woods, partying, and getting to know each other—the calm before the storm. And while our heroine from Season 1 is missing, we are introduced to a new femme fatale, Rebecca, played by Australian actress Tess Haubrich, who is best known for Wolverine and Alien: Covenant. Under Rebecca’s direction, the group prepares to fight back against Mick’s advances toward picking them off one by one. Think the Walking Dead’s Maggie rallying the survivors in Alexandria. 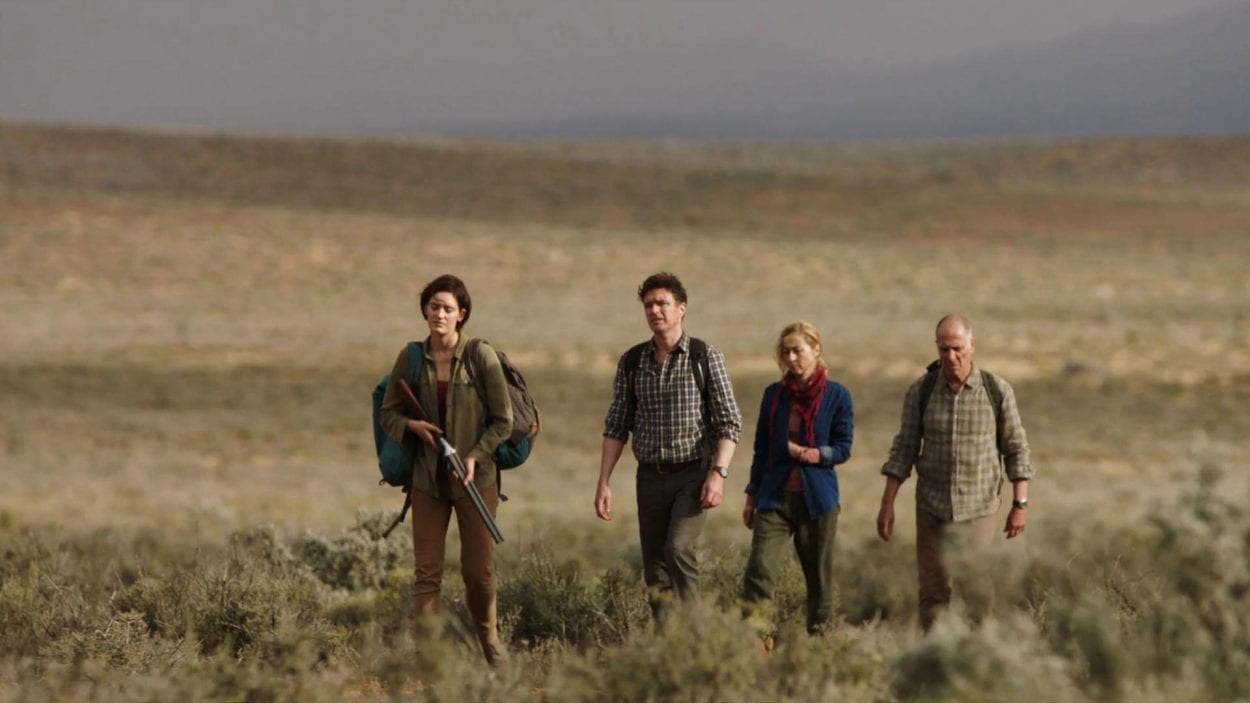 Strong women, breathtaking views, cinematography that truly brings the grit and dustiness of the Outback, and a strong story based on Greg Mclean’s original films make Season 2 a welcome distraction in these unnerving times.

If you’re interested, showrunners came up with an inventive marketing campaign for Season 2 surrounding a Facebook page for Outback Safaris including this fun advertisement below.

Season 2 of Wolf Creek is available for binging on Shudder April 30.