NOS4A2 is not a particularly uplifting show. Its protagonist, Vic McQueen (Ashleigh Cummings), lives with parents who abuse alcohol—and each other—all while she is battling an ancient child-kidnapping monster. One of the kidnapped children is someone Vic babysat.

Vic’s friend Maggie, whose closest person to a family member is killed at the hand of the monster Charlie Manx, is addicted to pills. Another friend of Vic’s, school janitor Bing Partridge, turns to murder to help his new boss (Manx). As we have seen one downer after another throughout the show, the NOS4A2 Season 1 finale (a two-parter, “Sleigh House” and “Gunbarrel”) turned the heartbreak up to 11.

The finale featured two of my favorite moments from NOS4A2, the novel: Vic being trapped in Charlie Manx’s home (known as the Sleigh House) and the subsequent showdown between Vic and Manx at a Colorado gas station. Vic enters the Sleigh House, despite Maggie warning Vic she was not ready to face Manx, and things don’t exactly go as planned. Manx destroys her bike and Inscape (the Shortaway Bridge) and traps her inside the house before lighting it on fire. Even though I knew Vic would escape the burning death trap (well, I was 99 percent sure), this scene had me holding my breath. It had some fantastic tension and I could practically feel the heat of the fireballs shooting up the laundry chute.

After escaping the flaming house, she encounters a brand-new character, Lou Carmody (more on him later), who gives her a ride to a nearby gas station. An injured Manx (due to the Wraith’s punctured gas tank) rolls up to the same gas station, and Vic returns the favor by setting Manx’s lifeforce—his Wraith—on fire. However, in doing so, Vic knowingly kills her boyfriend Craig, who is unable to exit the car.

In the aftermath of what may seem like good news—Vic defeats the bad guy, hooray!—the reality is that Craig is dead and Vic learns she is pregnant with his child. In addition, Vic abandons her life’s dream, attending the Rhode Island School of Design (RISD). And to top it off, we see that Bing Partridge has slipped through the grasp of the police, escaping to Maine and changing his identity.

With a shaved beard and dyed hair, Bing has found a new job at a dentist office, which will conveniently provide him with access to anesthetics. He will be waiting patiently for that trip to Christmasland, once Manx (who is in fact not dead, nor is the Wraith destroyed) has returned to form.

It’s a bleak place to be for Vic, who has been through a lot. She now will be faced with raising the child of her dead lover while attempting to track down the missing children in Christmasland.

Speaking of Christmasland, we didn’t get to see much of it in the first season of NOS4A2. It’s talked about all the time—it’s basically all Manx and Bing ever seem to discuss. But the audience was only given a short glimpse of the real spectacle of Manx’s Inscape. When I was a young kid, my parents would let me choose one present to open on Christmas Eve. That’s how the short scene with Christmasland felt, practically a tease.

But even though we were merely given a glimpse, it was an exhilarating glimpse. In Episode 6, Manx transports Maggie’s father figure, Sheriff Joe Bly, in the trunk of his Wraith into Christmasland. The visuals were impressive, with a combination of elaborate carnival-type rides and gingerbread houses. (Side-note: Between Stranger Things, Euphoria and now Christmasland in NOS4A2, we have been given a lot of excellent carnival-type scenes recently.)

But Christmasland is not the sweet, fun place its name would imply. It provides the setting for one of the most disturbing moments of the entire season, in which the children of Christmasland play “Scissors for the Drifter” with Joe, stabbing him repeatedly with scissors before tearing into him with their sharp, mangled teeth. NOS4A2 won’t be able to hide Christmasland as much in the second season, and the show can only benefit by putting it on the main stage. 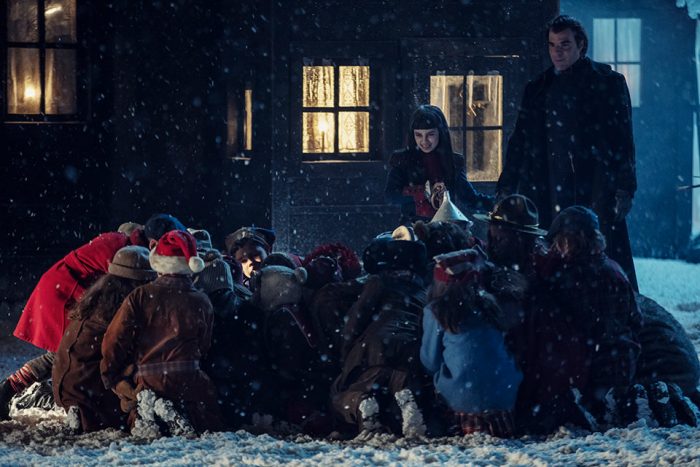 Thoughts on a Second Season of NOS4A2

NOS4A2 has been picked up for a second season, and considering where things left off in the Season 1 finale, I think it has the opportunity to become better. I had mixed feelings on the first season. I felt it started out strong.

Ashleigh Cummings carries the show in her portrayal of Vic. She masterfully displayed a wide range of emotion (no better example is her heartbreaking screams of sadness in the finale). And Manx and Bing are creepy and interesting villains.

But I feel like the show dragged a bit in the middle episodes, with a lot of focus on Vic’s struggling parents and her battle with upper-class members of her community. I understand the need to develop Vic’s real-life struggles and feature “non-scare” moments. They can’t be all monsters and candy canes. Even though some of the family drama dragged on at times, I liked portions of how it was handled. It would have been easy to make Vic’s parents an additional set of “bad guys.” But despite their flaws, they clearly love Vic. And they are human. Vic’s dad Chris is far from perfect; he’s a drunk and has abused his wife. But he makes an effort to be better. He gives up drinking and tries to be present in Vic’s life.

Linda McQueen selfishly shoots down Vic’s enthusiasm of attending RISD, even when she receives a full scholarship. But it’s not because she’s simply a bad mom. It’s because she is afraid of losing her daughter. It may have been handled in an immature manner, but it’s a very human idea.

Complaints aside, I think the Season 1 finale has turned the ship in the right direction going forward. I was interested to see NOS4A2 the show become more aligned with the book in the final episode. The finale depicts what we see about midway through the book. After that point, the book jumps ahead 12 years, where Vic and Lou are living together and have a child. (There was no boyfriend Craig in the book.) I don’t think we’ll see that much of a jump in time when we return for Season 2. My guess is that when the new season starts up, Vic and Craig’s child will be around the age of the children we’ve seen kidnapped in Season 1 (so four to five years, I’m guessing).

Lou Carmody’s character is a main reason I’m optimistic about Season 2. Even though Lou (Jonathan Langdon) appeared at the very end of the first season, and only for a short time, I immediately was drawn to his character. He provides a bright spot to a very bleak show, injecting humor and kindness into a dark world. Having Vic and Lou likely teamed up in Season 2 should be fun to watch. 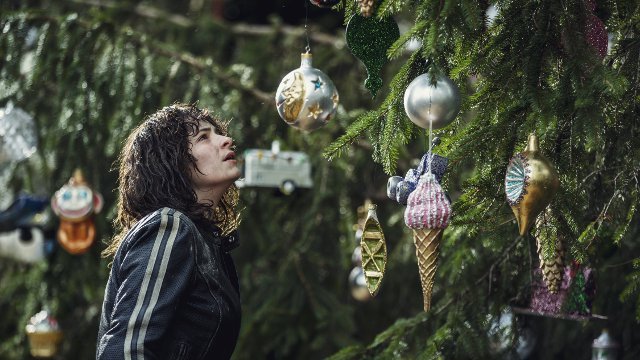 While NOS4A2 has a whole other half of its source material to draw from going forward, I also look forward to the portions that exist outside of the novel. One of the most intriguing moments of the first season came in Episode 8, when Manx visits a bar called Parnassus. The bar features some interesting inhabitants, including a one-armed man (!), a guy in a Freddy Kreuger sweater holding a teddy bear, a woman with a hair-obscured face, and brief flashes of other characters I was unable to identify.

And then at the bar (being served by who appears to be the bartender from The Shining) is a clown and red balloon—a clear shout-out to Pennywise the Clown from Stephen King’s It. (And just as a reminder, the author of NOS4A2 is Joe Hill, who is Stephen King’s son.) Pennywise also was alluded to in the pilot episode of NOS4A2. I hope we see much more of Parnassus and its inhabitants in Season 2. I can’t help but imagine we’ll see more run-ins with Stephen King creations, after Manx sends Bing Partridge to Maine.

I think NOS4A2 could really benefit from adding more evil Strong Creatives to the mix, and it appears that this scene in Parnassus shows that could be on the horizon. Manx is an enjoyable evil force, and Bing is an unpredictable ticking time bomb. Although I’m not sure how interested I am in Manx’s desire to find a pure “mother” for the children in Christmasland (now that he has established that Vic is not an option in that regard), it’s exciting to think there could be others to join in on the trouble.

Overall, I’m glad NOS4A2 has gotten the opportunity to move on to a second season (unlike another recent vampire-related show I enjoyed, The Passage, which was cut short after only one season). At some point, the show could progress past the book’s narrative. That is still a ways away, but I hope we get to see what that would look like.

Looking for more on NOS4A2? We’ve got you:

“NOS4A2 Brings Chills with ‘The Graveyard of What Might Be'”