The first episode of the Joe Hill novel-based NOS4A2 did a good job of laying out the major players and the overall feel for the show. But NOS4A2 Episode 2—“The Graveyard of What Might Be”—truly got down to business and brought the scares.

Things got off to a quick start, with Bing Partridge applying, via typewriter, for a job at Christmasland, responding to an ad he found in a comic book. Typing away in his basement, he hears “I’ll Be Home for Christmas” begin to play and he walks upstairs, where he finds his father slow-dancing with a corpse in front of a lit-up Christmas tree. The music fades, and Bing’s father chases him back to the basement, wearing a gas mask. A pale Daniel Moore is waiting for him with an invitation before he twists Bing’s arm out of its socket. Bing wakes up with a gasp and a view of the moon that was reminiscent of Henry Bowers in Stephen King’s It. Any risk of a slowdown in NOS4A2 Episode 2 was thrown out the window after this scene.

We saw Bing very briefly in the first episode, passing Vic in the halls of her school. But this opening scene shows us the key role that Bing will play going forward. In his position with a custodial services company, he has access to gases and anesthetics—which will undoubtedly come in handy for his eventual work with Charlie Manx (Zachary Quinto).

Olafur Darri Olafsson does a great job playing Bing, creating a sympathetic character who gets mixed up in a whole lot of trouble. I already feel sorry for him. If the show goes the path of the book, Bing will end up being one of the most terrifying aspects of NOS4A2. The decision for the show to give him a connection to Vic as the school janitor should pay off, as the two comic book-sharing friends will find themselves on opposite sides of a battle at some point.

The creepiest moment of NOS4A2 so far also included Bing. After Manx invites Bing into the Wraith, he drugs him and takes them along the roads to Christmasland—which are “paved in dreams.” The imagery of the pine trees and snow-packed winding roads—with the Wraith’s twig-like windshield wipers scraping away—is exactly what I imagined while reading Hill’s novel.

Manx tells Bing he is on a mission to save ten children from monsters—parents who neglect or abuse them. It wouldn’t be kidnapping, but rescue and retrieval, Manx assures him. Lit-up snowmen line the road, and poor Bing waves back at them with a smile. He is one step closer to accepting Manx’s proposal.

Finally, the two arrive at their destination. We don’t get to see Christmasland yet. Instead Manx has brought Bing to a clearing of tombstones on top of snow-covered ice: The Graveyard of What Might Be. As Bing wipes away the snow, children trapped under the ice stare up at him with wide eyes and palms extended. These children, Manx says, will have their childhood stolen if he doesn’t save them. Manx convinces Bing to join him after hinting that he knows Bing was abused as a child as well. Bing, shaken from what he sees before him, can’t help but agree. After all, Manx has practically made kidnapping sound like a good and necessary act.

This graveyard scene was creepy as hell, and it’s moments like this that could make NOS4A2 a true joy to watch. 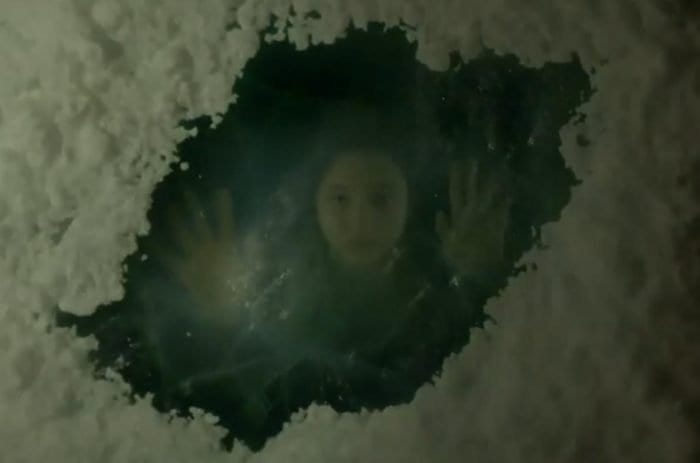 Strong Creatives, the Knife, and the Inscape

After another parental spat, Vic (Ashleigh Cummings) takes a trip across the Shorter Way bridge and is transported to Here, Iowa. Maggie just so happens to be strolling by (Vic does have a knack for finding things she’s looking for, so it shouldn’t be surprising she runs into Maggie like this), and the two head for the library to chat. NOS4A2 uses this encounter to lay out some of the ground rules of the show.

Maggie explains matter-of-factly that Vic is a “Strong Creative” and that her “Knife” is her bike and her “Inscape” is the bridge. Everyone has an Inscape (a secret place), Maggie says, but only Strong Creatives are able to access them (via their Knife). Maggie notes that “The Wraith” is a Strong Creative, although she likely mistakenly means Manx. And I’m betting Manx’s Knife is the Wraith and his Inscape is Christmasland.

(Side note: Hill used the idea of an Inscape in some of his other novels, such as Horns and Heart Shaped Box.)

Maggie was much more of a minor character in the NOS4A2 novel, so it’s looking like this will be a bigger focus in the TV version. I think this aspect could play out really well (as long as it’s not too overdone to where it becomes cheesy), especially when introducing new characters—new Strong Creatives—down the road.

After NOS4A2 Episode 2 aired, Joe Hill even got in on the action and shared his Knife and Inscape:

Probably my knife would be a pen; the inscape is wherever the pen takes me when I start to write. https://t.co/zgwrRXjoQ9

Overall, I didn’t find Vic’s storyline in this episode as interesting as what we saw with Bing and Manx. The scenes with her parents seemed to drag at times, with not a lot of new info that wasn’t covered in the pilot (father’s drinking, the fight over Vic going to college, etc.) other than the parents’ separation. I don’t think the show will dwell on this too much going forward, once Vic decides to help Maggie in her search for Daniel Moore.

I am interested to see how Maggie is eventually able to convince Vic to join her. Because what does Daniel mean to Vic? I’m not sure what the connection will be—unless perhaps Manx decides to kidnap someone close to her? Perhaps the neighbor girl who shares Vic’s passion for art? We’ll see.

I wasn’t sure how NOS4A2 would transition from book to TV screen. From what I’ve seen from the first two episodes of the AMC adaptation, I’m very pleased with how it has turned out thus far. And if we can get more scenes like the Graveyard of What Might Be, well then NOS4A2 could be quite a fun, wild ride of horror.