Orson Oblitz’s The Queen of Hollywood Boulevard (2018) opens on a shot of the titular Queen Mary (Rosemary Hochschild)’s face. She is about to turn 60 and wears every day of it. Mary has built a small empire at her strip club that she has managed for decades on the seedy streets of Hollywood. In the land of broken dreams, the opening shot of Queen Mary’s world-weary face is a microcosm of the world she “rules.” The gritty, dirty streets of Los Angeles are tough as steel and so is Mary; not a hero or a feminist, she’s a survivor and a ruthless businesswoman. Many of her actions throughout The Queen of Hollywood Boulevard reveal her to be as monstrous as any other fiend lurking in the clubs on the strip and the gangsters waiting in the ally. Oblitz’s film, a horrific and lurid LA noir tale ripped straight from pulp fiction, is a film pointing a finger at the American dream. The Queen of Hollywood Boulevard’s Mary has done whatever necessary to have her piece of the pie and she’s not about to change that now—for better or worse. 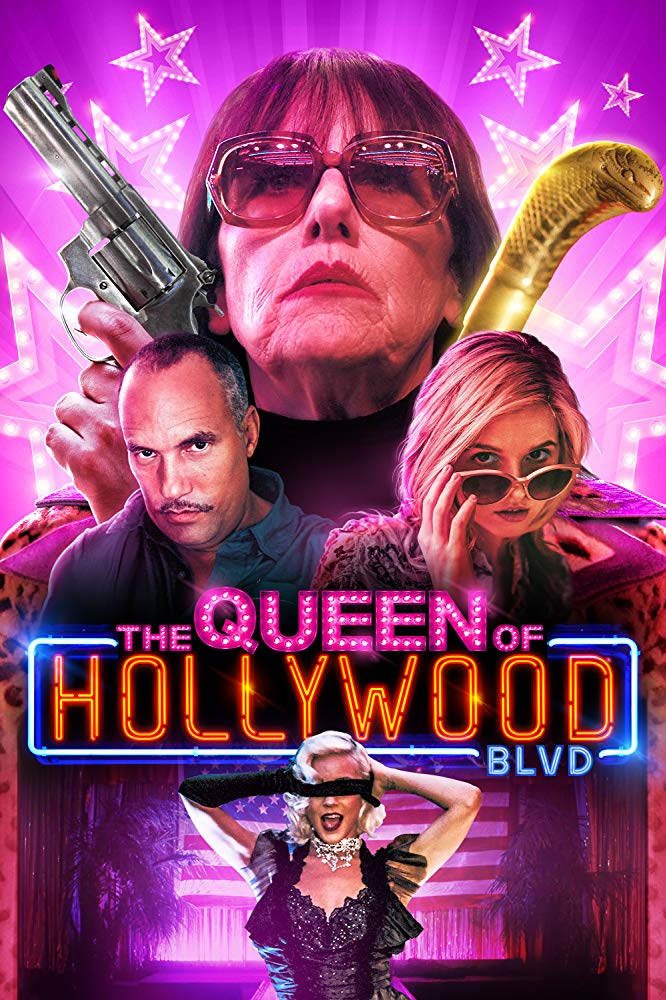 The film unfolds over a 24-hour period beginning the morning Mary turns 60. The seedy strip club she manages is busy planning her party as a stranger from her past shows up to claim a long overdue debt; on paper it’s standard noir fiction. Oblitz’s aesthetic and the sheer brutality of the film rise it up a notch…but it’s Rosemary Hochschild’s performance as Mary that kicks this movie up to an entirely more real, visceral experience. Her performance is one of the most raw, unflinching things I have seen for a long time in any genre. She isn’t a likable woman. Queen Mary is a pimp, a gangster and a drug addict; she’s also kind, intelligent and thoughtful. If things would have worked out differently or in another life, Mary would be the queen of the stage instead of the queen of LA’s dirty sun-soaked streets.

The plot is simple enough; that surprise visit on Mary’s birthday at the club she manages is from the actual owner, local gangster Duke (Roger Guenveur Smith), there to collect on an impossible debt that Mary has no intentions of even paying. She describes herself as a “red-blooded capitalist” and she isn’t kidding. She’s an immigrant who fought for every scrap she could get and has done whatever’s necessary to carve out and maintain a little slice of the pie—the “American Dream”—for herself. The fact that Mary’s slice of the pie is a dirty strip club populated by drug addicts and lost souls trapped in a Hollywoodland purgatory is besides the point to her.

The Queen of Hollywood Boulevard is a highly stylized film due to Orson Oblitz’s direction (who also plays Queen Mary’s son). The narrative feature is laced with a sense of surrealistic beauty that it only finds in the ugly. Everyone feels like a patron saint of one bad cause or another and the film is broken up with shots of strippers doing their routines over different Hollywood lowlife lifers speaking beautiful soliloquies about the various natures of existence and how that fits in their world. A new stripper at the club, the underage Grace (Ana Mulvoy-Ten), embodies every young girl that ever got off a bus in California with stars in her eyes only to be chewed up and lucky if she was spit back out later. When Grace confides in Mary that she wants to become an actress and asks her the fastest way to make it in Hollywood, Mary replies back with a chuckle to take Fountain.

The scene that really encapsulates this angle of the film takes place in Mary’s car as she tells young beautiful Grace the story of how the infamous Hollywoodland sign became simply the Hollywood sign. The visuals themselves tell a story all their own. Over a backdrop of dark city lights overcut with a Spanish singing stripper in front of an American flag back at the club, an older woman (Mary) who has survived but not thrived tells a young beautiful would-be starlet in the passenger seat (Grace) Hollywood’s oldest tale of woe.

The real-life story of Peg Entwistle may not be well known, but it is a story that encapsulates everything about the land of broken dreams. Ms. Entwistle never made it as an actress—as so many young women did not—so she climbed up the Hollywoodland sign, jumping off and committing suicide. The city responded by shortening the sign to just read Hollywood. The point of the story is that Hollywood was never a place for anything except broken dreams for anyone except the fortunate few; the town was built on lies and painting over other people’s tragedies.

Mary’s club itself serves as an island of misfit toys. Over the years it has become a haven for the downtrodden and Queen Mary, a patron saint of junkies and outcasts everywhere. If Hollywood runs on dreams, then The Queen of Hollywood Boulevard runs on fragments of dreams from broken souls who don’t even remember a time before. Mary has given these people a refuge from the hot and unforgiving world run by disgusting pedophiles and ruthless reneging gangsters. Nothing comes without a price however—even refuge for the damned. Mary knew that she had made a deal with the devil long ago, she just made the mistake of expecting the devil to live up to his end of the bargain.

In one of The Queen of Hollywood Boulevard’s most graphic scenes, two worlds collide in blood soaked disgusting fashion. Mary is instructed by Duke to take the underage Grace to meet someone in a hotel for sex. Mary takes her, but despite her cold appearance and worse demeanor, Queen Mary isn’t about to let one of her girls get raped while she waits outside in the car like a taxi with its meter running. It turns into a bloody confrontation that shows the two sides of Hollywood clash in bloody brilliant fashion.

The john is a powerful senator and he is completely clean in his appearance compared to everyone else in the film. He is well dressed, attractive, and his clothes are obviously well-tailored; he is also a monster that is expecting to beat and rape an underage girl. Mary stops all of it even though she has been ordered by her boss to go there…and she doesn’t stop it with kindness. She stops it with a knife aimed with bloody fury and rage, killing the man and barely escaping with her life. In that moment, as she commits the murder, her face reads as if the john represents every man who ever fucked her over or controlled her in her 60 years on this planet; it’s beautiful, disgusting, and cathartic all at the same time.

The film leads up to Mary’s birthday party at her strip club where all of the misfits and outcasts are gathered to celebrate the woman who gave everything to create a home for herself and others swept aside. It would be easy to say that the movie is simply stating  that the “American Dream” is a lie, but that isn’t what The Queen of Hollywood Boulevard left with me. My impression is that the “American Dream” is absolutely alive and well, it’s just not how it’s sold in the movies.

Mary got her slice of the pie; she had spent her life trying to become an actress before falling into drug addiction and pimping prostitutes, turning every trick in the book along the way. She eventually embraced the way of life that seemed to have almost found her but she did so with a steadfast iron will and became an actual queen that presided over her own court, even if it was just a dingy strip club. It was Queen Mary’s and noting anyone was going to do would take that from her. The patrons there were accepted because she saw something of herself in many of them—some she could keep around to use and others she just knew if she didn’t accept them no one else would. The pursuit and fulfillment of the “American Dream” itself had made Mary the hardened woman that she was. It wasn’t that it didn’t exist, the problem was the price she had to pay to get and then attempt to maintain it.

The Queen of Hollywood Boulevard ends as all tragedies do, with the death of our anti-heroine: Queen Mary. No one ever truly escapes their own story, no matter what they chose to do with their life. Queen Mary’s blood does spill out fittingly across a star on the Hollywood Walk of Fame, but as Mary would say, “no matter.” The movie celebrates a woman and a group of people the world is too often eager to put to the side: the downtrodden, the addicted, the ugly, the forgotten, and the abused. These are Queen Mary’s people and they are the forever the court of the Queen of Hollywood Boulevard.

The Queen Of Hollywood Boulevard Is Currently Streaming on Shudder.