Velma has made quite the stir in the film and TV world, unfortunately not for the best reasons. The left is calling it ‘anti-woke’ and the right is calling it ‘woke’ but in reality, it’s neither. The problem with Velma is that this show really doesn’t know what it wants to be. It has become very clear the show was written and greenlit, only to be retconned by producers to add existing IP into it. If it feels out of place that these characters we all know and love are in this scenario, that’s because it is out of place. A show was created with a specific mood and was then forced to do a complete 180 to add these beloved characters to it. I was definitely hard on Velma in my previous article, and now I feel bad about it. I can feel the time and effort the creators put into this show, it just constantly falls flat in a way I don’t think the showrunners would have seen coming.

Our episode picks up right after the big kiss between Velma (Mindy Kaling) and Daphne (Constance Wu). Velma is left in a daze as she gets ready for school, leaving her to run out of the window without pants on. At school, Velma and Norville (Sam Richardson) have a conversation about how the last place Diya’s (Sarayu Blue) phone pinged was at Fred’s (Glen Howerton) house. The school kids go to an assembly where they find out all of the girls will be forced to take a self-defense seminar hosted by Daphne’s moms Linda (Wanda Sykes) and Donna (Jane Lynch). 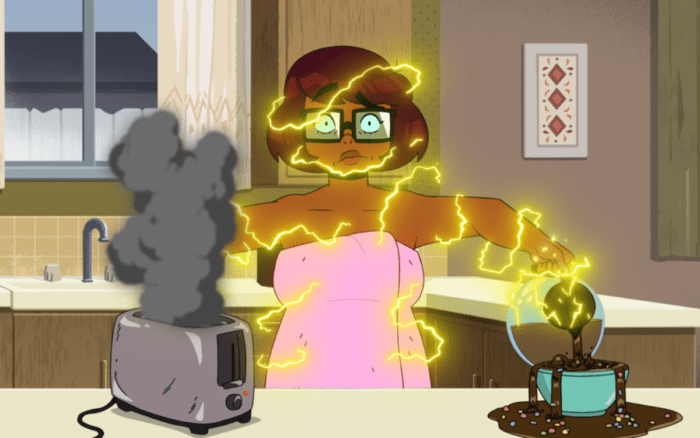 This does lead to a potent topic of why the girls have to go to a self-defense seminar, rather than having the boys learn to not murder women. Truly this is one of the moments where this show shines. This point isn’t over the top, it’s a real question. Women are always told how they should avoid being attacked or singled out, rather than questioning why so many men are committing heinous attacks against them.

Velma and Norville go to the prison to visit Fred, hoping to find out why Diya’s phone pinged at his house the night of her disappearance. Almost on cue, Velma has a hallucination, which again looks absolutely spectacular like the last two episodes. The bout of hallucinations causes Velma to get banned from the prison after she hits a few corrections officers. Back at school Velma and Daphne have a conversation about the events that transpired the night before, but neither girl concedes that they like each other.

During the self-defense seminar, the girls all learn they will be forced to compete in a self-defense tournament. The first-place prize was a college scholarship but then gets changed to a gun, while the third-place prize is…detention? During this tournament, Norville goes back to the prison to talk with Fred again. The only thing that really comes out of this scene back at the prison is we learn Fred likes it when his cellmate watches him pee. When Norville tries bringing up Diya, Fred immediately wants to leave.

The self-defense tournament continues, with the only notable moment being Daphne stabbing someone in the leg and facing no repercussions. Norville gets a cardigan from his guidance counselor-dad because his dad says that’s all you need to become a therapist. This leads Norville to put the cardigan on when he goes back to talk with Fred, and it works. I guess. There’s also a pretty dumb joke where Fred basically tells Norville he’s Muslim now. Again there are many points in this show where a joke just makes zero sense, and this is one of them. It’s a complete throwaway line and just falls flat. Fortunately for Norville, the cardigan works, but now he has a line of prisoners waiting to talk with him.

Back at the self-defense tournament, it is now down to Velma v. Daphne. Knowing she can’t beat Daphne in a fight, Velma resorts to reading her diary aloud. In the end, Daphne beats the hell out of her. Later in the day, Velma is driven to Daphne’s by Norville. She asks him to wait in the car while she goes to talk to Daphne, and he says he will because he has nothing else going on… But it turns out he is late for his group therapy session at the prison so he leaves to go to the prison. Too little too late though as the prisoners begin to riot when they can’t have their group session.

Velma and Daphne have a nice moment where they apologize and embrace, but Velma nearly ruins it by trying to make a friends-with-benefits joke. When Norville arrives at the prison he sees it is on fire, and it turns out his dad is there too. Norville gives his father back his cardigan, and a business card falls out of it. Turns out it is a business card for the Crystal Cove Insane Asylum. Spooky! The episode ends with Velma putting lipstick on her fist and making out with it. 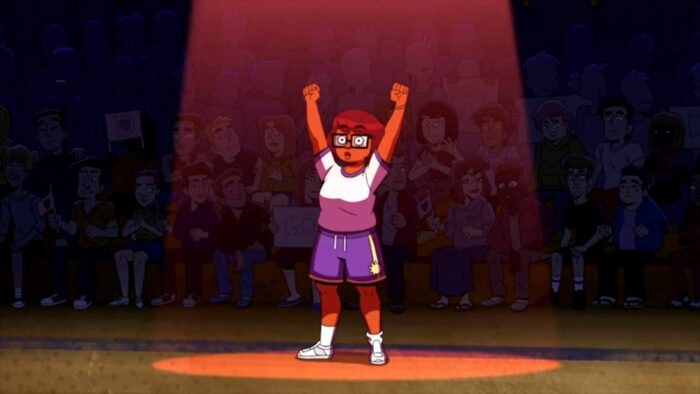 Okay, so this episode was nowhere near as bad as the first two. It was kind of witty, had a few good jokes, and moved the story forward pretty well. My big issue with this one though is there’s really no spook! I wish they would have found a few more moments to throw some good creepy moments in there. My new addition to these articles will be my “Dumb Gag” counter, this episode bringing in a total of 11 dumb gags, the dumbest being a girl coughing up her butt implant during one of the self-defense fights.

Hold onto your pants, because this episode has one of the grossest plotlines I have seen in quite a long time. Mayor Dave (Jim Rash) holds a press conference to proudly exclaim that they have been murder free for two weeks. Only during this conference a woman runs out and says there has been a third murder! What, that means Fred could not have done it! During another press conference, the sheriff says the one thing connecting each murder is that the girls were hot. So to combat this, the Mayor says the school is going to have to make a ranking of the five hottest girls in the school, and each girl will get police security. See what I was saying? 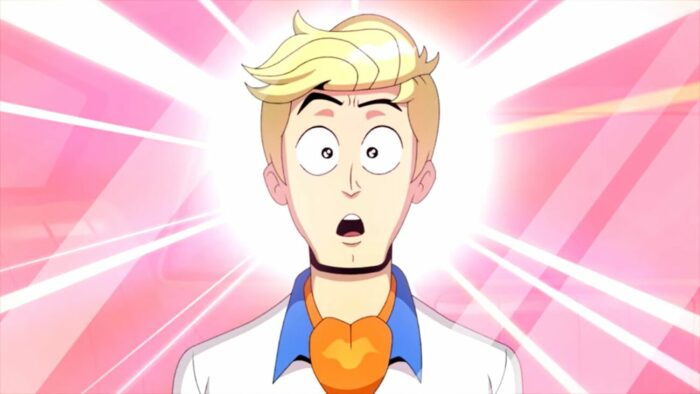 Oh, and for some reason, Velma is tasked with making this list. This leads to all of the girls competing for the hot girl list start putting on scandalous performances for Velma hoping she will put them on the list. With there being a third murder, Fred gets released from jail. While all of this is going on Daphne’s parents put her on house arrest, basically. Norville comes over to Daphne’s to find out what someone could do to get Velma interested in them. During their conversation, someone throws a geode through Daphne’s window.

At the mayor’s office, Velma is told rather than a police detail for the hot girls she will have to give all of the girls “uggo lessons.” Now that Fred is out of jail, he’s using his time to read The Feminine Mystique on a park bench. He sees a hot girl sunbathing, but has no interest in her. Rather, he is fascinated by the “uggo” who is painting Scooby in the park! I will say I loved having this moment of finally being able to see somewhat of a reference to the Scoobster. Fred can’t help but find himself attracted to this painter.

Daphne believes the geode was thrown by her biological parents, because, sure, that’s a logical assumption to come to. This does lead to an interesting set of scenes where Daphne and Norville go around learning about geodes, it’s kind of a cute few scenes. In hindsight this episode really seems all over the place, doesn’t it?

Sophie (Melissa Fumero) drives Velma to school, only to go into labor while they’re stuck in the drop-off lane. When Velma asks the sheriff to help move the cars so the ambulance can get in, he just makes a commotion so that everyone can go watch Sophie give birth. In an attempt to get everyone out of the ambulance’s way, Velma enlists the hot girls to do dances for the crowd, hoping this will get them out of the way. When this only works a small amount, Velma starts beating the shit out of people, and it actually made me spit take with my tea. Fred sees Velma going beast mode on everyone, and immediately becomes infatuated with her.

Later that night Fred sends Velma a photo of him taking a bubble bath, thinking that would be hot or something. Only to then appear at her window with flowers. Fred tells Velma that reading The Feminine Mystique has taught him to love a woman inside and out. He also then asks her if she wants to go to Handstuff Point. While old Velma would have immediately said yes, Velma says she’s not attracted to Fred anymore and declines his offer.

Daphne and Norville go to the Crystal Cove Mines, an old amusement park (now we’re getting that Scooby-Doo feel!), but they don’t end up going inside. This bummed me out. I was really hoping we’d be getting a glimpse of the old ideas of what Scooby-Doo used to stand for. My only hope is a later episode will take us into the mines. The only one to actually learn anything good from Velma’s uggo lessons is Gigi (Yvonne Orji). In a really sweet moment we see Gigi dress up all goth-like, and saying how now she feels comfortable to really be her true self. This moment is perfectly met with Gigi and Norville bumping into each other and blushing. Really it was the perfect way to end the episode, we’re finally able to see someone do something positive in their life and have something positive come out of it. 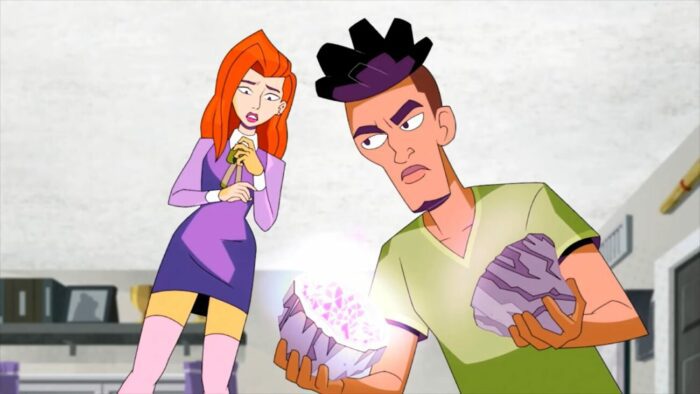 This episode really felt like nothing. It was kind of gross, not in a fun horror way, and really did little to further the plot of the story (with the exception of Fred getting released from jail). The Dumb Gag counter on this episode was only seven, with the prize going to Fred’s “Handstuff Point” comment. I know that’s not really a bit, per se, but it was the dumbest moment that stuck out to me.

Okay, so. These two episodes were definitely much better than the first two. They seemed more fleshed out and they went through more rounds in the writers’ room. Again, no character faces any repercussions for their actions. Fred literally starts a riot and escapes prison. Whether he is innocent or not, surely he would get charges for that, right? My biggest gripe, as stated, is that there was no element of spook or horror in these two episodes. I really hope future episodes turn around and bring some more moments of horror, or at least up the ideas of the hallucinations Velma is having.