Another week, another American Horror Story. With just two episodes left of Season 2, Episode 6 “Facelift” feels in need of deep reconstructive surgery. As I have stated multiple times, I struggle with American Horror Story/ies. I personally enjoyed Season 1 of Stories; I don’t think I can really say the same for Season 2 at this point. What started off as strong and ambitious quickly turned into a sloppy mess of ideas that seemingly didn’t get any rewrites beyond the first draft. One thing that “Facelift” tries to do is build the tension up and up throughout the overwhelming majority of the episode, for a payoff that was not only elementary but lacking in any pizazz or intrigue.

In this probably-nonfiction tale of old-money Beverly Hills socialites, we start with Virginia (Judith Light) peeing in a jar after waking up just to pat it on her face. Based on her stepdaughter Fay’s (Britt Lower) reaction, this seems like a normal thing Virginia does. As if that wasn’t enough of an insight into Virginia’s character, we see tons of pill bottles around, all touting various cosmetic promises. Fay and Virginia have a conversation about their neighbor Bernie (Todd Waring) and how he has recently left his wife of many years. Fay is studying for her baby bar exam, while Virginia plots on purposefully running into Bernie at the liquor store. Director Marcus Stokes does a solid job with the slop he was handed here. Stokes is able to give us some decent storytelling and visual clues through just the first few minutes alone, but Manny Coto’s script drags everything down with so much unnecessary dialogue. 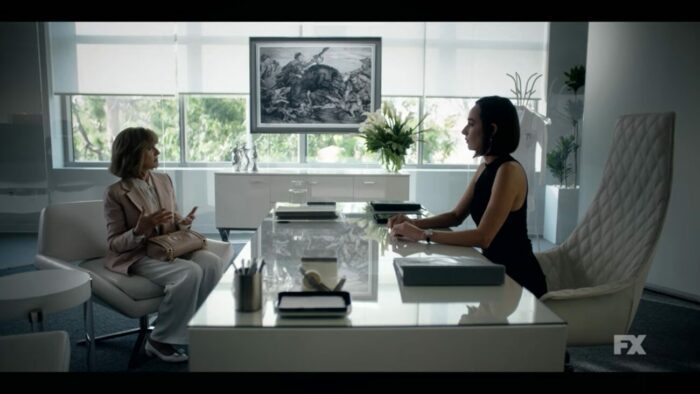 Virginia puts on makeup and some nice clothes and goes to the liquor store ready to run into Bernie. After loitering for lord knows how long Bernie finally shows up, though under his arm Cassie (Cornelia Guest), who knows Virginia from college. Cassie is full of energy and life—the complete opposite of Virginia. Virginia asks Cassie how she looks so good for her age, and Cassie says she’ll give Virginia the information for her doctor as long as she keeps her distance from Bernie.

Virginia sets up a consultation with Dr. Perle (Rebecca Dayan), who basically tells her that she is ugly and that due to her outlook on life, no surgery would do the trick. Honestly, this is a really dumb moment. It’s obvious they have money, even if they are in debt they have access to resources the majority of us don’t, and she just…hasn’t tried plastic surgery to this point? You would think living in the backward ass town of Beverly Hills and having money, you wouldn’t be wasting your time by rubbing piss on your face. There are tons of nonsurgery treatments out there that would not literally drain your bank account, like what happens here. The only good thing about this scene is we see just how much of a powerhouse Judith Light is as an actor. The way she emotes amalgamates perfectly with her voice and it is just an all-around treat for her to be in it. I’ll say one thing, she is lightyears better than Sarah Paulson.

Uh, where were we? After getting a facial scan from Dr. Perle, Virginia talks with her financial advisor who tells her she doesn’t have the money to go forward with the surgery. Unfortunately for Virginia’s bank account, she decides to go through with the surgery. As the anesthesia starts to kick in, things get “weird.” Everyone in the surgery room starts chanting this Latin chant. This is just too much at this point. Obviously, we know something is off, it was clear from the conversation with Dr. Perle that Virginia was too aloof to pick up on. This chanting is over the top, and really takes away any anxiety that was building by making it feel cheap. 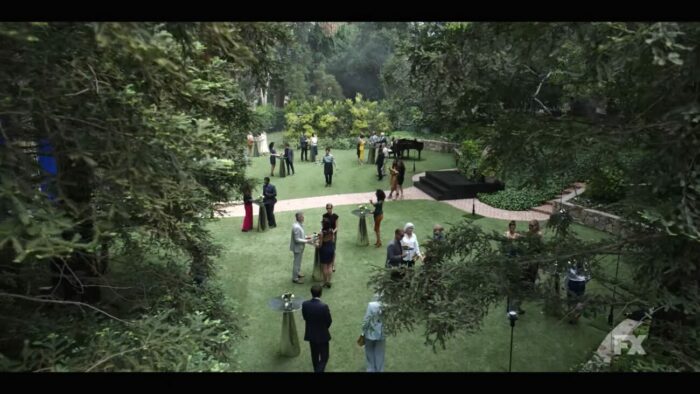 Now back home from surgery, Virginia looks like the mom from Goodnight Mommy. Fay comes to visit and is immediately taken aback by seeing her stepmother’s face and hands covered in bandages…wait, did I just say HANDS?! Those aren’t supposed to be operated on for facial surgery! That’s so whacky! Virginia makes it clear multiple times through the episode that Fay is just her stepdaughter, and this is the first time. The whole stepdaughter angle could have been really interesting but is completely ruined by the AHS twist they are probably contractually obligated to fulfill.

Dr. Perle tells Virginia that Fay is not helpful to her healing, so the good doctor will give her a complimentary weekend at her retreat in the Santa Monica Mountains. To get there from Beverly Hills you just take the 2 to the I-10 all the way to the 1 and make a right onto Yerba Buena Road. The Californians. Fay tells Virginia she has a bad feeling about this retreat, but Virginia is completely indoctrinated by Dr. Perle at this point. Virginia goes to the retreat, still bandaged to the nines, in a scene that feels too similar to Get Out. When asking Dr. Perle why she is the only one who has bandages on, Dr. Perle gives her a half-assed answer about how most everyone here has already had the surgery. Then Dr. Perle asks Virginia if they can do a bandage removal tonight at a special gathering, and Virginia says yes. Fay shows up to try and figure out what is truly going on here, but she is quickly chloroformed by one of the security guards and dragged off.

The nighttime gathering is just as creepy as you would imagine. Fay is brought back out, but Virginia says, again, that Fay is just her stepdaughter. Once Fay is taken away, again, the clunky bandages wrapped around her head and hands are removed to reveal…a poorly pulled-off Twilight Zone “Eye of the Beholder” homage. Virginia now has a snout and the face of a pig, with hands that have been morphed into hooves. Obviously frazzled and confused, we are finally overly exposited to a monologue from Dr. Perle about their God Etain. Etain is the god of beauty, and, basically, they have to kill an “ugly” every year to preserve their beauty. They just can’t flat-out kill Virginia though, it must be done Most Dangerous Game style. The cult gives Virginia a two-minute head start and tells her if she can get to the water before they kill her then she can be free. 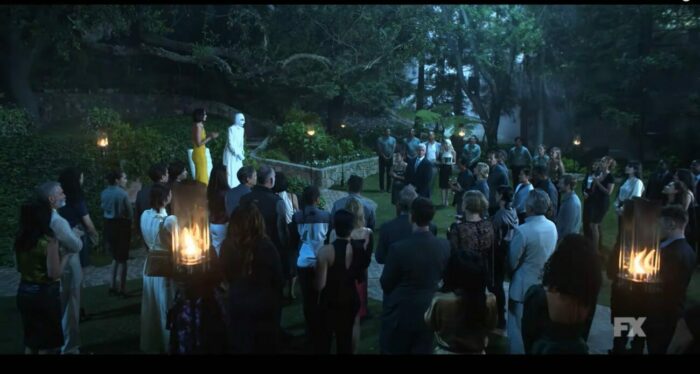 Of course, Virginia does not make it to the water and is stabbed multiple times by the cult and their spears. Fay comes back into the mix, where the cult tells her that her father and mother were part of their cult. Fay ends up joining the cult. Cool. Sometime later, Fay is walking around campus looking for the administrator’s office. A man starts talking to her, but she brushes off his advances, that’s until she sees they have the same tattoo from the cult.

“Facelift” was a failed attempt at slow-burn horror, faulted by clunky dialogue and poorly executed scares. There is very little from this episode that makes this episode feel like it was worth the time to watch, the main point of positivity being Judith Light’s incredible acting. With just two episodes left in the season, it can’t really fall much farther than it already has. Maybe they got cocky with the success of Season 1, but Season 2 really feels rushed and half-assed.