Coming off the heels of two pretty god-awful episodes, daddy Murphy and Falchuk decided to greenlight a fairly solid episode of American Horror Stories. While it’s not the best episode of the season, it takes the already known idea of Bloody Mary and puts an interesting spin on it. Episode 5 “Bloody Mary” is not perfect by any means, but it provides a fairly interesting twist and expands on the mythos in a way that is a bit lazy though done in good faith. Let’s take a look into it.

We start out with four girls in the bathroom, drinking, doing makeup, and playing a good ole round of Bloody Mary. Our main players are Bianca (Quvenzhané Wallis), Elise (Raven Scott), Maggie (Kyla-Drew), and Lena (Kyanna Simone). Bianca is tagging along with her sister Elise who is hanging out with her friends. As the girls start to play a round of Bloody Mary Bianca stops it at the very last minute, worried about what might happen. 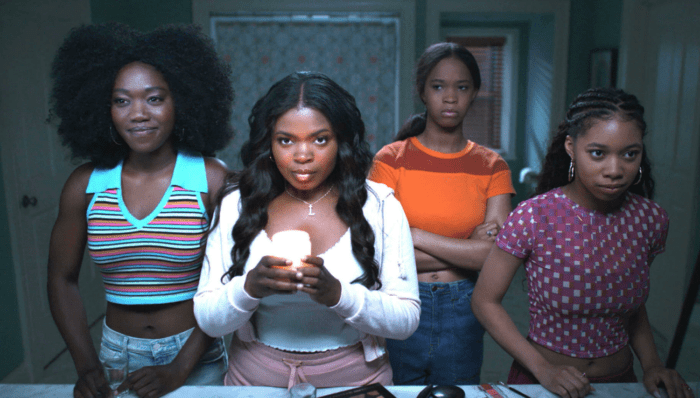 After Elise gets a bit rough with Bianca, the girls all decide to go to four different mirrors to play. After each girl says their respective Bloody Mary three times, they are met with a cracking mirror and then the appearance of Bloody Mary (Dominique Jackson) herself. Bloody Mary shows the girls the future they could have—they just have to obey the orders she gives them. Bianca is told she must accuse her guidance counselor of sexual assault if she wants to get into Yale. Lena is told to drop the cheer captain on her head when they do a human pyramid so that she can become the new captain. Maggie is told to leak the nudes of her crush’s girlfriend if she wants him back. Elise is told she must hurt…but Bloody Mary trails off before she can finish the statement.

Thoroughly freaked out from all of this, Bianca and Elise leave the house and head home. I should take a quick side note: this episode contains some commentary that I think I was able to fully pick up on, but I am nowhere near equipped to thoughtfully break it down beat for beat. Basically, Bianca and Elise live with their mom, who literally wants nothing to do with them. The only reason Bianca is able to eat every day is that Elise works a job on top of having to go to school. What is even more insane is the work outfit Elise has to wear, which is basically a Hooters-style tight T-shirt and tight short shorts. That is inherently not a terrible thing, especially if someone is comfortable wearing things like that for work, but keep in mind she is still a high school student at the end of the day. This adds so much to Bianca and Elise’s characters.

When Bianca and Elise get home, they see their mother Robin (Marsha Henry) with a strung-out-looking white dude, and they are moments away from getting it on. Their mom is pissed that they are home early, saying she deserves a night to herself, too. Robin makes them sleep in the car.

The next day at school Elise, Maggie, and Lena are learning about reflections and refractions in physics when their teacher flips the whiteboard around to reveal a giant mirror. The teacher talks about how Mayans and other Indigenous cultures believed that mirrors are conduits for other dimensions. The three girls see Bloody Mary in the mirror, leading to Maggie freaking out and running out of class. Her friends quickly follow. The girls get together to question whether or not they should follow the orders. What’s interesting is how they handle the idea of an outside, seemingly omnipotent force can make people in less than welcoming circumstances and how those forces can control and take over your life. 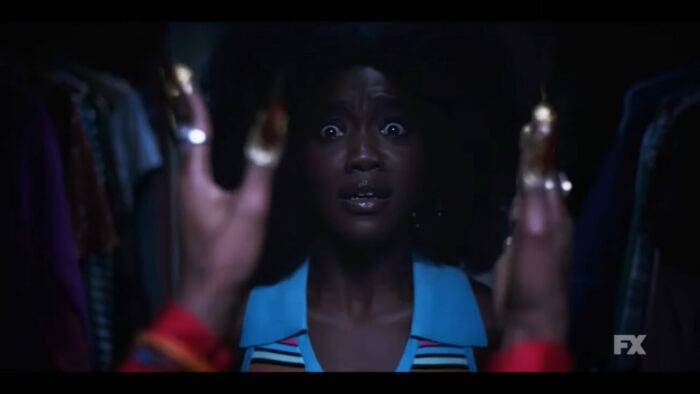 Elise does research on Bloody Mary and finds the cabin she was slain in…a cabin that isn’t too far away from her. Lena decides she is going to follow Bloody Mary’s orders and drop Anna (Ryan D. Madison) on her head. Maggie cheers Lena on, knowing full well what she is planning on doing, but Lena pulls back at the last minute and does not follow through. That evening, while Elise is at work, Bloody Mary comes to Bianca and tells her she has until midnight tomorrow to do what she was told or else she will be dead. Elise comes home from work to find Bianca on the front steps, scared out of her wits. Just then, Maggie runs over to them to tell them Lena is dead. Her eyes have been clawed out.

Determined to “find a way out of this,” Elise goes to the museum and talks to the docent (Shane Callahan) about Bloody Mary, the cabin, and what really happened. The docent tells her there was a special knife that was used to kill Margaret Worth, who ran a reverse underground railroad. Margaret would say she was helping escaped slaves, but really she would either torture them, starve them, or sell them back to slave catchers.

Scared to death, Maggie starts downloading her crush’s nudes and finds a recent video of her and a man that isn’t her boyfriend. Maggie, like Lena, cannot follow through with the request. As guessed, Maggie ends up with her eyes clawed out too. Bianca and Elise go back to the museum and plan to steal the dagger with the hopes of using it to possibly kill Bloody Mary. They pull off the heist, but it’s fairly cut and dry with little anticipation or suspense. The biggest turn-off of this episode is how little suspense there truly is. Every situation they are presented with is catalyst and resolution, lacking the true rising action to make something truly engaging.

Bianca and Elise make it to a dead end, where they must walk the rest of the way to the cabin. The path is littered with mirrors, which must mean they are heading the right way. The mirrors in the woods provide a nice creepy atmosphere, but there really isn’t much they end up doing with the mirrors in the long run. They call out Bloody Mary once they get to the cabin, giving us the first real Murph-uk…Falch-phy…twist of the episode. It turns out Elise was told that she must bring Bloody Mary the dagger and the blood of three innocents. Yep, Elise killed Maggie and Lena and plans on adding Bianca to that list. A twenty-second chase ensues before Elise knocks Bianca out. 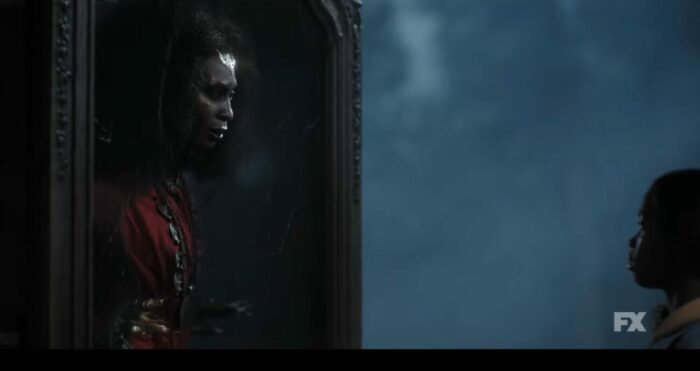 There’s some fairly plain dialogue before Bianca gets the upper hand on Elise and kills her. With the hopes of ending this whole shitstorm she has found herself in, Bianca cuts her hand and gives Bloody Mary the blood of the three and the dagger. Bad move on her part, because she gets Mirrored! Now Bianca Bloody Mary! INCEPTION NOISE.

At the end of the day, this episode is better than “Drive” and far better than “Milkmaids” in so many ways. The nearly all-Black cast for this episode really knocks it out of the park and provided the majority of my enjoyment for the episode. The teens do a really good job with their characters, but Dominique Jackson absolutely KILLS it! Pun very much intended. This episode is kind of like the best parts of the worst episodes, and the worst parts of the all-time best episodes. The practicals look great, and the minor VFX work is passable. All in all, this episode would be ranked #3 out of Season 2 episodes so far.