Search
Visit with the ancestors. Image courtesy of the author.

I recently interviewed Charlee Mae, a spiritual seeker and soul therapist who also does paranormal investigations. I had intended to create an audio interview about Charlee Mae’s early experiences in ghost hunting, where she is now, and how she got there. I didn’t intend for an emotional derailment of the interview after she mentioned that my grandmother had just popped in to visit her…my grandmother who died in 1992.

Charlee Mae is in my earliest memories, aside from my immediate family. She is two years older than me, and I estimate in my earliest memories of her I was four, and she was six. We attended the same schools, played on the same sports teams, and our families attended the same church. During my interview with her, Charleigh Mae shared that she had been having experiences with spirits since she was approximately nine years old. I have had an interest in the paranormal and all things unusual since at least then. In all the years of knowing her and sitting with her at church every Sunday, we never talked about it. We quietly amused ourselves in the back pew while the adults took in the service. It’s really sad that we never talked about our interests until so recently.

We didn’t talk about it.

We didn’t talk about the paranormal because we lived in the middle of the Southern Bible Belt in a small town. At that time, our community had a low tolerance for anything outside of the confines of what was considered normal. Anything ghostly or paranormal was seen as a demonic entity trying to take our souls. Alternatively, people who shared stories about ghost sightings or UFO encounters were assumed to be mentally ill. Charlee Mae and I had no idea that we were both very interested in all the things that go “bump” in the night, creatures that may come down from the stars, and all creatures in between.

We talked about it decades later

Charlee Mae began life in a small Appalachian Mountain town. She had experiences in her childhood that led her to learn more about the spirit world and beyond. She moved out of our small town and had a mainstream 9–5 job until a few years ago when she was able to retire and pursue her interests more fully. She is now following her dreams and passions after her early retirement. She has performed paranormal investigations at sites like the Sallie House, the Grandview Funeral Home, and Whispers Estate. Charlee described investigations into funeral homes as always highly active. She has assembled an amazing collection of paranormal investigation equipment. Her collection includes high-tech cameras, complicated motion detection, and thermal data equipment, and super-powered audio devices. But her favorite tool is something we all probably have.

You have a ghost-hunting tool in your junk drawer.

The lowly flashlight is Charlee Mae’s favorite ghost-hunting aid. She explained that spirits could be contacted with a simple $10 flashlight. On the Octagon Mansion ghost hunt expedition, we had a lot of success with a simple flashlight. We placed it securely on a surface and then asked for any spirits present to turn it on or off. This began slowly, but it happened. It wasn’t a short in the flashlight or a trick. I saw it.

Charlee explained that one of the reasons she does her work is because of the feelings she gets when people can communicate with their loved ones who have passed on. She enjoys the comfort the living obtains knowing that life does continue after death. She also talked with me about the importance of looking at logical explanations for any evidence or experience before determining that it was paranormal. At our ghost hunt, I had looked for rational, normal, mundane explanations for the lights and equipment readings, but there were none. As we were talking about ways to communicate, a strange thing happened.

A visitor popped into the interview

My grandmother popped in for a visit with Charlee Mae. They had known each other. In our first conversation after decades, Charlee Mae mentioned that she remembered me at church, remembered my grandmother, and visited our house. (I grew up in a haunted house, and Charlee Mae wants to investigate my childhood home, but that’s a different story for another day.) Her mention of my grandmother brought curiosity but also made me misty-eyed. I didn’t expect that.

Charlee Mae was able to quit her day job to pursue her passions.

Charlee Mae shared that she used to have a normal job like other people. She described how unhappy she had been before she could retire and pursue things that sparked her passion. And she pursues a lot of things! In addition to performing paranormal investigations, Charlee Mae is also a Reiki Master. She also provides spiritual counseling and coaching, as well as readings. She has a live webcam in her home where she captures orbs flying through. Charlee Mae enjoys visiting with spirits and peering through the veil into other worlds. She is comforted by the spirits and enjoys the comfort she can bring to others. When I talked with her about how all of this is possible, she gave me a physics lesson.

Energy can’t be created or destroyed. It can change into different forms, but it doesn’t die. That is very reassuring. It was very reassuring for me to think about how my grandmother still exists somewhere in some way. I hope she will have more visits. and I’d certainly like to talk with Charlee Mae again!

Sarah Sigfried hails from the rural mountains of Virginia. She has enjoyed horror movies and ghost stories since childhood. A mental health clinician by day, she spends her leisure time creating nightmares. She dabbles in makeup special effects and horrifies her friends and neighbors each Halloween. Sigfried is an emerging author and is an affiliate member of the Horror Writers Association. She dominates pub trivia on horror-related topics and especially enjoys classic horror movies and 1980’s horror comedies. She lives with her spouse and their cat, Sam in a home originally built by a family of morticians. 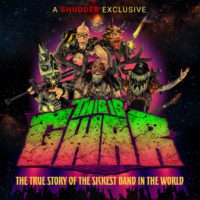