40 years ago, Dark Night of the Scarecrow aired for the first time on CBS, and to this day I don’t think there has been a single film of the “killer scarecrow” variety that comes close to the heights this film reaches.

Dark Night of the Scarecrow opens on Bubba Ritter, a mentally challenged but kindhearted man who’s struck up a friendship with a young girl in town named Marylee. When Marylee is accidentally mauled by a neighbor’s dog, four of the townspeople—Otis Hazelrigg, Harliss Hocker, George Philby, and Skeeter Norris—assume that Bubba is to blame, tracking him down to where his mother has helped him hide disguised as a scarecrow before murdering him via an impromptu firing squad. Once it’s discovered that Marylee is fine—and that Bubba had in fact saved her life—the four men stand trial for murder, only to have the charges against them dropped due to lack of evidence. But their celebration doesn’t last long, as the very next day the same scarecrow appears in one of their fields- – -and it isn’t too much longer until the self-appointed vigilantes start getting killed off one by one.

It’s a fairly simple plot, but Dark Night of the Scarecrow makes the most of it —and sets itself apart through its atmosphere, pacing, performances, and the sense of ambiguity that the film maintains right up until its final moments. 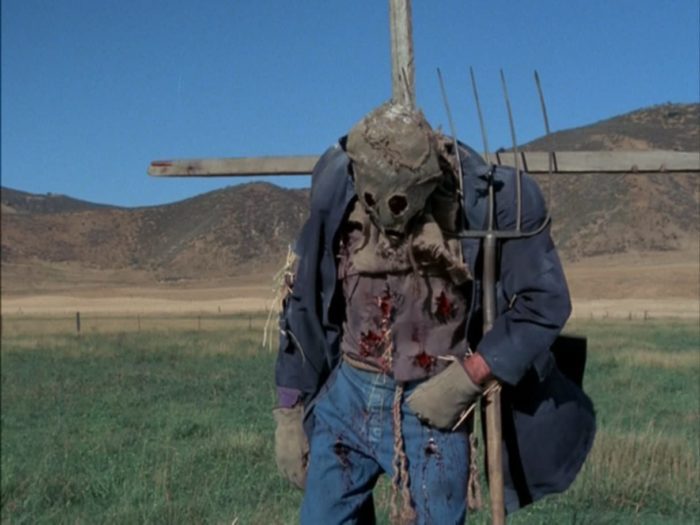 This is a good old-fashioned spooky film, constantly building up atmosphere and tension while simultaneously making its small-town environment feel like a real, lived-in place. The almost constant ambient noise of chirping cicadas fills the film with the warmth that comes with the fall season, while other natural sounds are used more sparingly for particular emphasis—pay particular attention to the sound of crows, often a sign that the scarecrow is due for an appearance, and it’s all mixed in with a well done, idiosyncratic soundtrack that feels oddly reminiscent of Pino Donaggio’s score for Tourist Trap. It’s technically a made-for-tv film, but it was originally conceived as an independent feature, and it shows in just how well executed everything is. It’s also remarkably restrained for a horror film, making careful use of the scarecrow to ensure every appearance has maximum impact while giving us an abundance of haunting, memorable shots.

But the centerpiece of Dark Night of the Scarecrow is Charles Durning’s performance as Otis Hazelrigg. Otis is a villain of the frightening familiar variety: the monstrosity of small-town meanness. He’s a postman who fantasizes about being an army general; a small, petty man who tries to act like a big one by taking his small bit of power as town postman and using it as a license to bully not just Bubba, but his fellow co-conspirators; and finally, he’s the sort of person who thinks that he can get away with anything, repeatedly bullying the other three members of the group into keeping silence even after they’re convinced that somebody knows what happened and that they need to turn themselves in. 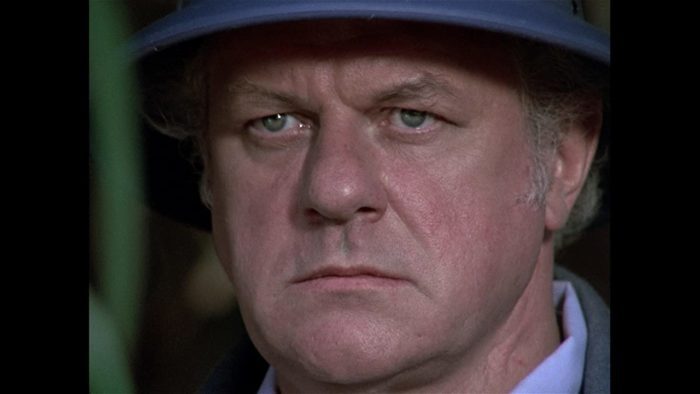 When we first meet Otis he’s spying on Marylee and Bubba while on his mail route, before meeting up with one of his future co-conspirators and stating that they need a “more permanent solution” to the problem of Bubba—heavily implying that he should be murdered—and everything he does afterward just takes him spiraling further and further downward. He forms a posse to hunt down and murder Bubba, plants a pitchfork on his body to make it look like he was attacking them, then when the murder reaches court he lies on the stand to cover up their role in it. He harasses Mrs. Ritter—thinking that she’s responsible for the killings—to the point that she has a fatal heart attack, then burns her house down to try and cover it up. Then after forcing Skeeter into helping him dig up Bubba’s grave to confirm that Bubba is actually dead, he murders Skeeter for wanting to go to the police and confess to what they’ve done. Oh, and it’s also strongly implied that he’s a pedophile, due to his…intense interest in Marylee, meaning that there was very likely a seriously screwed-up undercurrent of jealousy that led to his constant harassment and eventual murder of Bubba.

So when he finally meets his end at the end of the film, it’s an absolutely satisfying death, both in how much how deserved it is and in how well executed the kill itself is. After murdering Skeeter and burying him along with Bubba, Otis drives back home at night, only to see Marylee in the road. He chases her into a nearby pumpkin patch—he’s now convinced that she is responsible for the killings, and had previously told Skeeter that she needs to be “dealt with” in the same way that Bubba was. But when he finally catches up with her, it isn’t more than a moment before a nearby plowing machine starts up. Otis, believing District Attorney Sam Willock to be operating the machine, does what he does best: first, he tries to lie and talk his way out of it, then when the machine starts driving towards him he does what he’s done all film—he runs, fleeing in terror only a step or two in front of the machine, still convinced that he can outrun the consequences of what he’s done, but eventually he stumbles- – -right onto the waiting tines of the same pitchfork he planted on Bubba’s corpse, in the waiting hands of the scarecrow. It’s a beautifully conceptualized kill, and it adds an element to the film that brings it closer to a Greek tragedy. 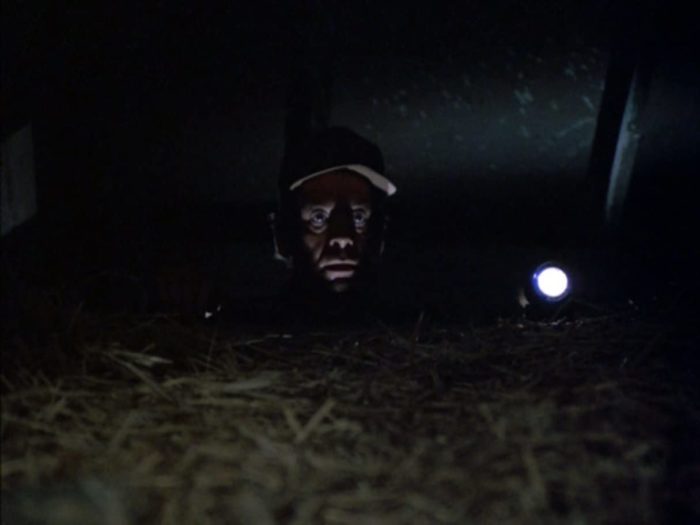 Speaking of kills, Dark Night Of The Scarecrow‘s existence as a made-for-TV film means that most of its kills take place just off-screen, or are cut in such a way as to avoid showing anything too gruesome. But the film takes what should have been a weakness and turns it into a strength, making use of sound design and foreshadowing to make each one of its kills haunting and memorable.

We repeatedly see Harliss at work either using or fixing his woodchipper—and when he meets his end it is by that same woodchipper. After investigating a noise at night following the scarecrow’s appearance in his field, Harliss finds himself pursuing someone into his barn—only for the woodchipper to turn on by itself. Startled, Harliss stumbles over the edge and grabs onto a light fixture as he dangles over the awaiting woodchipper. The scythe he’d been holding falls, and the hum of the machine turns into an ugly squeal as it digests the metal as sparks fly from the light fixture. When he finally falls, the camera zooms in on the still swinging light fixture as we hear the thud of Harliss falling into the machine—and the same ugly squeal as he then goes through the machine, before we quick cut to a sickening plop of red preserves on Otis’ breakfast the next morning. 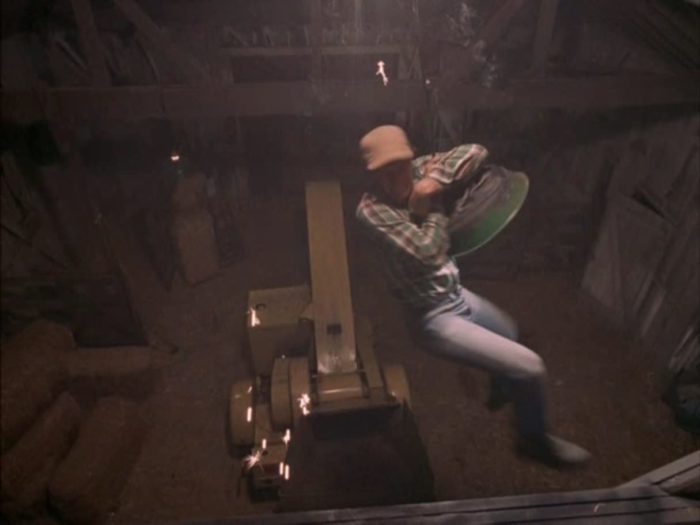 Meanwhile, Skeeter is never seen without his trademark red hat, often adjusting it as a nervous tic whenever Otis is being particularly ruthless. When Otis winds up killing him to prevent him from turning himself in, his death is a relatively quick affair—the camera pans up to Otis, we hear a quick clang of a shovel hitting against Skeeter’s skull, and when the shovel comes back up Skeeter’s hat is sticking to it.

But the worst fate is reserved for Philby. After a late night of working, he runs into something that scares him to death, leading him to take refuge in one of his grain silos. But when whatever has been chasing him passes by, he’s horrified to find out that the silo door is now sealed up tight, and it isn’t more than a moment before we hear the machinery switch on—and not another moment after that we see grain start to go up and rapidly pour into the silo. It’s a horrifying scene, as Philby howls like an animal as he desperately tries to get the door open and keep himself from being completely buried alive, before it finally ends with Philby’s lifeless arm dropping his flashlight. 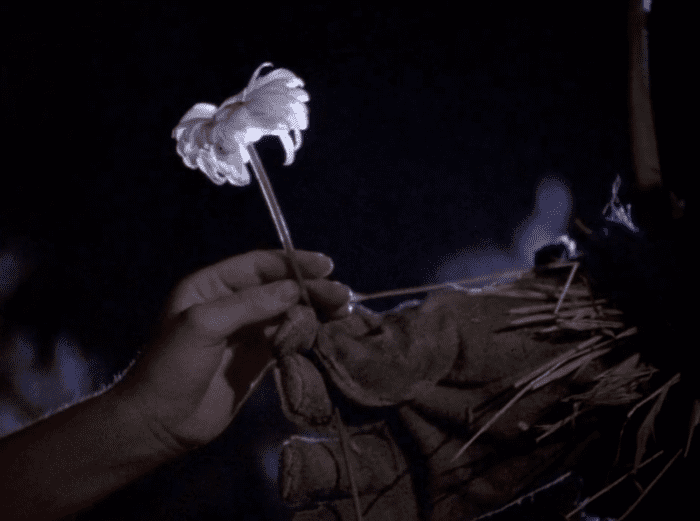 Dark Night of the Scarecrow is at its best when it leaves you guessing, which it does until just about the very end. Is it something supernatural that’s stalking the four vigilantes? Or is it just someone still alive who is out for revenge? Is it Mrs. Ritter, who chillingly warns Otis that “there’s justice in this world…besides the law?” Is it Sam Willock, the district attorney who’s not convinced by Otis’ story and says that he’ll see them on death row if any evidence comes out that they were lying? Is it Marylee, who has developed a strong case of creepy child syndrome—and is convinced that Bubba is still alive and is simply playing the “hiding game”?

Or if it is something supernatural, is it Bubba back for revenge? Or is it what Mrs. Ritter warns Otis about: justice in the world, besides the law? Or is it even just their ever increasing paranoia—and in some cases, guilt—getting the better of them? Even after the film has ended, it’s still left somewhat open-ended as to what we’ve just seen, and it’s all the stronger for it.

Even after 40 years, Dark Night of the Scarecrow still holds up as the premiere killer scarecrow movie, emphasizing restraint and atmosphere over gore while presenting us with a modern tale of morality paired with an iconic image of horror that has never been used as effectively as it is here. It was the first killer scarecrow film—and in my opinion, still the best one that’s ever been done.